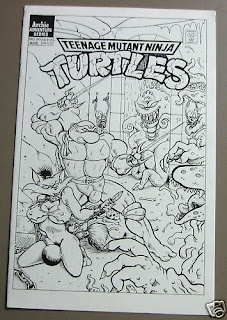 “The Birds, the Bees and the Turtles!” 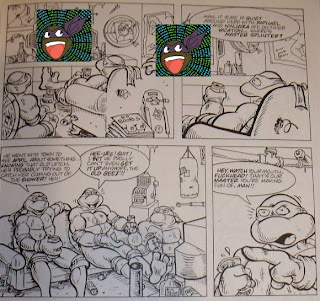 At a hotel room, Raph is busy lighting up a joint when Ninjara comes out of the bathroom in stockings, crotchless panties and a dog collar.

At April’s apartment, Splinter knocks on the door.  April answers and Splinter asks if she can help him with something. 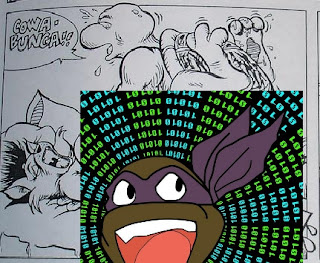 Raph ignores the phone as he’s too busy with foreplay to notice.  Ninjara asks him to use that big “bo” of his and Raph proceeds to penetrate her, shouting “COWABUNGA” all the while. 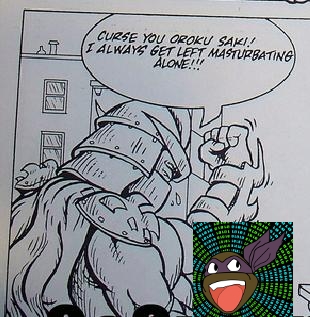 *This comic was created by Bill Fitts as a farewell gift to the Mirage staff and was not intended for commercial circulation.  Only 50 copies were published and it was distributed exclusively amongst Mirage employees.

*It languished in secrecy until Steve Murphy sold his copy on eBay back in 2009 and it was shared amongst the (bewildered) fandom at The Technodrome Forums.  Props to Archon Turtle for scanning and sharing this and traumatizing us all!

*This issue featured two bonus pin-ups by Seneres: One of Don and another Turtle drooling over an issue of “Playturtle”, and one of all four Turtles getting Ninjara a towel as she steps out of the shower.

Luckily, I have a functional sense of humor, so I found this thing to be hilarious.  Gross, weird, insane… but hilarious.  I think what separates this from online smut, other than its pseudo-official publication, is that “The Birds, the Bees and the Turtles” was meant as a joke and not something to legitimately get off on.  I’m sure some creepy individuals at Mirage probably got off on it ANYWAY, but hey, whatever gets you through the night.  It’s full of gross-out humor, for sure, but damn if some of it wasn’t funny.  Little details like April’s arsenal of dildos and Shredder’s serrated cock ring… How can I NOT laugh?

On a related note, I wonder where the other 49 copies of “The Birds, the Bees and the Turtles” are?  They’ve got to be out there somewhere.  If you ever obtain a copy, you can always get Steve Lavigne to sign it for you at the next con he's invited to.  I’m sure he’d be thrilled.

Maybe someday IDW can reprint this along with the Ninjara serial published in that furry fap rag.  They could call it “TMNT Adventures: The Traumatizing Collection”.  I can't think of a single reason Nickelodeon wouldn't give the green light.