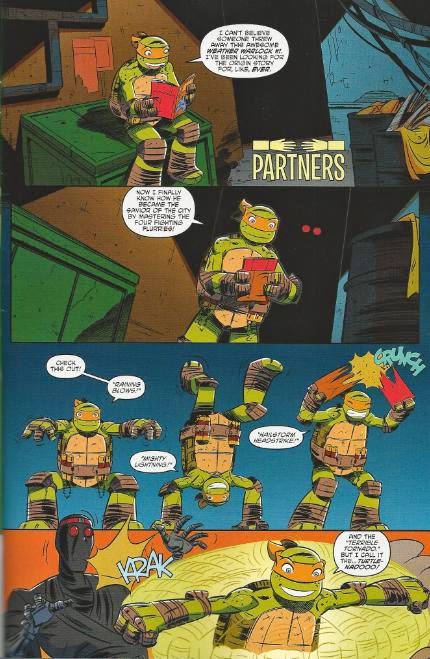 Down in an alley, Michelangelo is reading an issue of Weather Warlock.  While attempting to copy the title character’s signature “Terrible Tornado” attack, he accidentally smashes the head of a Footbot that was sneaking up on him.  Mikey spins out of control into the path of an oncoming truck while the damaged Footbot reboots.  Malfunctioning, the Footbot identifies Mikey as “friend” and saves him from getting run over. 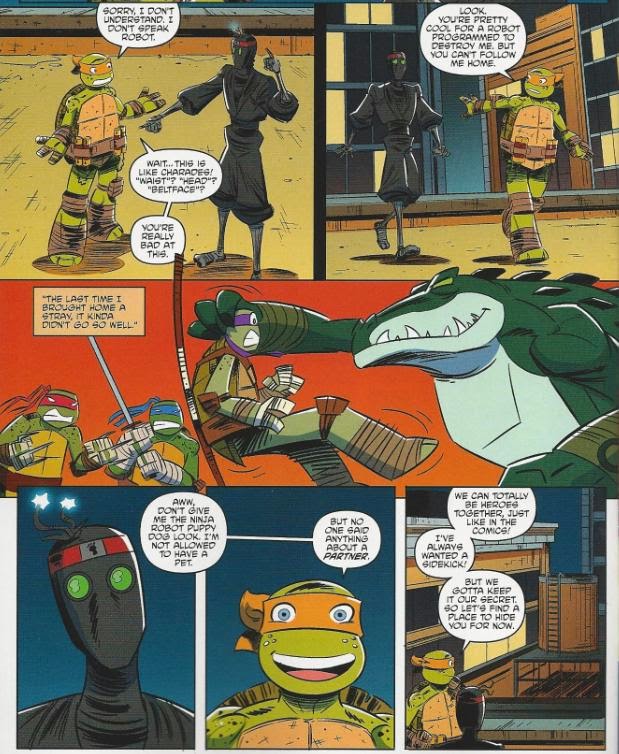 Imprinting Mikey as his leader, the Footbot proceeds to follow him.  Mikey realizes he can’t take the Footbot home (not after what happened with Leatherhead), so he orders the Footbot to stay in an abandoned water tower.

The next day, Mikey visits the Footbot with a longbox of comics.  He wants the Footbot to be his new sidekick so they can fight crime.  The Footbot scans the comics and understands his orders.  After getting some costumes, Mikey and the Footbot become the superheroes “Captain Karate and Sparky”.  The two gaudily clad do-gooders proceed to fight crime all across the city; their exploits being relayed on TV for the other Turtles to see. 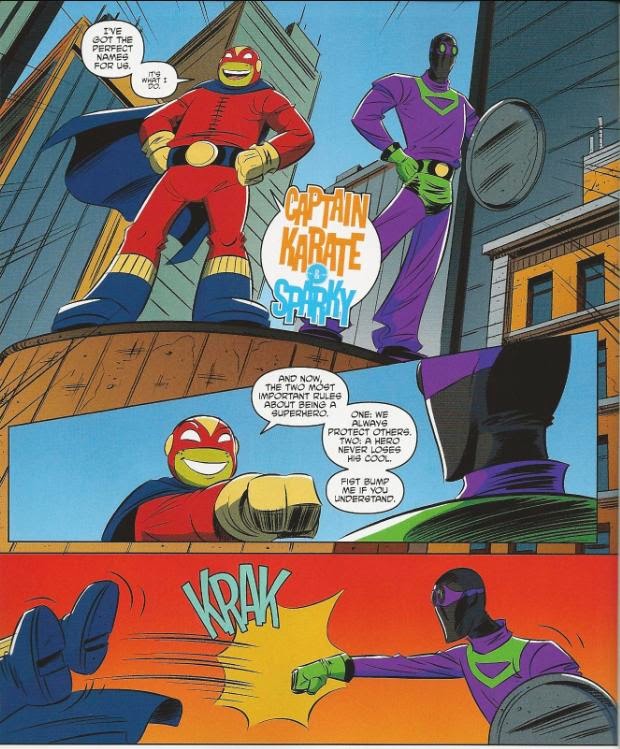 A few nights later, on a rooftop, Captain Karate meets up with the Turtles and reveals his secret identity to them.  Naturally, they figured it out a long time ago.  They’re hesitant about Mikey hanging with a Footbot when suddenly Karai and a unit of properly functioning Footbots attack.  Karai wants to reclaim Sparky, as he’s Foot Clan property.

In the midst of battle, Spark saves the other three Turtles from the evil Footbots.  He sees Karai about to stab Mikey in the back and leaps in front of the blade.  Karai impales him and Sparky goes offline from the damage.  Enraged at the loss of his sidekick and friend, Mikey chases Karai down and knocks her off the rooftop.  Rather than let her fall to her death, he saves her, because that’s what heroes do.  Karai calls him a fool and escapes. 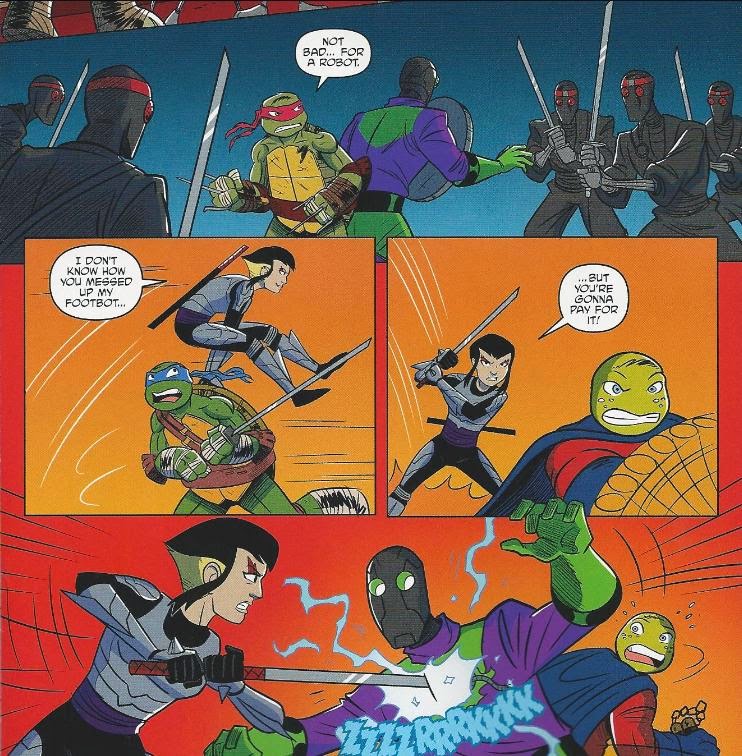 Later, in the lair, Mikey confesses to Master Splinter that he didn’t make much of a hero, having let his own sidekick fall in battle.  Splinter corrects him, saying that through his example, he was able to teach a ruthless killing machine how to be a hero.  Mikey, now more enthusiastic than ever to “lead by example”, attempts to take command of the TMNT’s sparring session.  Instead, Raph just pummels him.

*This story is continued from TMNT New Animated Adventures #10.  The story continues in “Cooking With Kraang”.

*The Footbots were first introduced in the season 2 episode “Follow the Leader”.

*Mikey references the time he brought Leatherhead back to the lair in the season 1 episode “It Came From the Depths”.

Michelangelo’s love of superhero comics is something that’s existed in practically every incarnation of the character.  Michelangelo wanting to be a costumed superhero, though… I think that was something the 4Kids cartoon introduced (unless I’m forgetting one of the billion episodes of the Fred Wolf cartoon, but I think only Donatello took on a costumed crime-fighter persona in that show).  It’s one of his more obnoxious modern traits and the “Turtle Titan” stories were uniformly some of the worst episodes of the 4Kids cartoon.

Fridolfs has a limited amount of space to work with, so the superhero concept spans a whopping 3 pages; the careers of Captain Karate and Sparky consisting of an introduction, a montage and then a televised summary of their exploits.  So in that regard, the superhero-wannabe shtick is actually NOT the focus of this story and doesn’t have the opportunity to get as irritating as any of the “Turtle Titan” shit from the 4Kids show.

The real heart of “Partners” is Michelangelo befriending (and very quickly losing) the malfunctioning Footbot named Sparky.  The truncated length of the story does sort of hurt the authenticity of their friendship, as we kind of gloss over their relationship.  While I was rather glad the whole Captain Karate bit was compressed into a montage, we really don’t get to see much of Mikey and Sparky bonding; their emotional connection is to be taken on face value alone.

While you don’t really “feel it” when Sparky dies, I did appreciate Splinter’s summary of the moral on the final page.  Mikey, in his own way, was able to teach honor to a robot that was programmed to kill.  Admittedly, he did so by damaging the robot and then ordering it to scan a bunch of comic books, but it’s the lesson about setting a good example and swaying even the most seemingly irredeemable foes to the side of good that counts.  This is a kid’s comic, after all.

Grade: C (as in, “Come to think of it, is this the first time we’ve ever seen any of the Nick Turtles with their bandanas off?  Have they ever removed them in the cartoon?”)
Posted by TMNT Entity at 8:08 PM