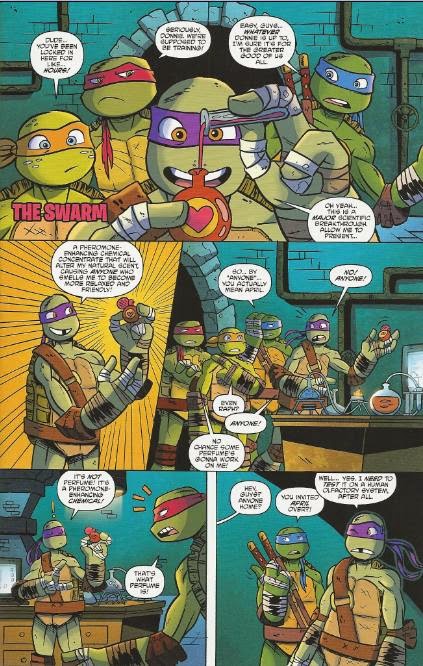 In his lab, Donatello is working on a pheromone spray that'll act like a love potion and make April fall for him.  The other Turtles chide him for making “perfume”, but Don calls April over (under false pretenses) to test it, anyway.  April shows up and is seemingly unaffected by the odor.  However, Donnie begins to attract thousands of insects, apparently hungry for the strong lilac scent he used. 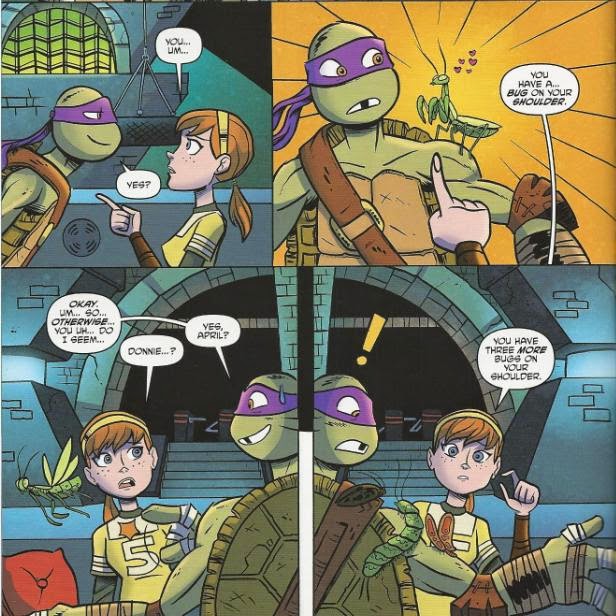 The bugs chase Donnie out of the sewer.  Mikey follows him to keep him safe, Leo and Raph hose down their training dummy with the pheromone spray and strap it to the roof of the Shellraiser to create a decoy, and April stays behind in the lair to research a way to neutralize the pheromones.

Out on the streets, the decoy works and draws the bugs away from Donnie.  However, it also attracts one of Baxter Stockman’s giant parasitic wasps the Turtles thought they’d exterminated a long time ago.  The parasitic wasp bumps into Raph, causing him to drop the perfume bottle, smashing it over himself and his brothers. 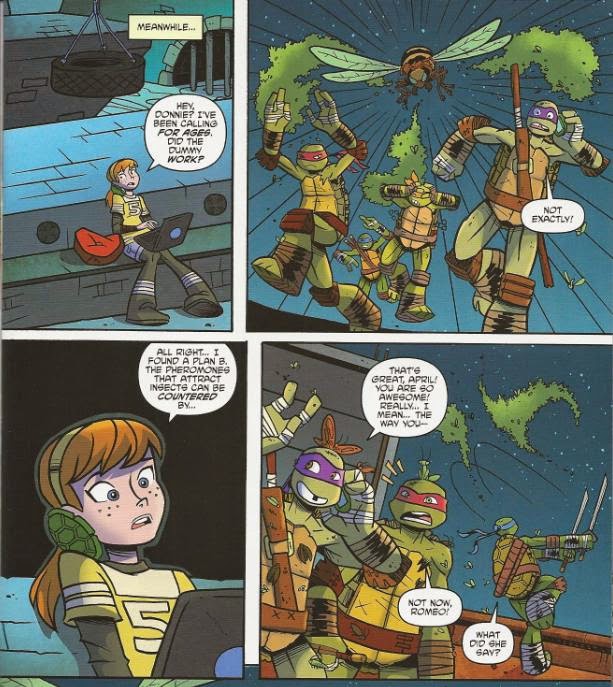 As the parasitic wasp and thousands of insects chase the Turtles across the rooftops, April calls in on her T-phone to tell them she’s found a cure.  Apparently, hot sauce is a solid insect repellant.  The Turtles find their way to the Super Spicy Hot Sauce factory, but before they can bathe in the habanero juice, they need to catch the parasitic wasp so it can’t reproduce and turn everyone in the city into zombies.  Mikey lassos it with his chain and the Turtles drag it with them through the skylight and into an open vat of hot sauce.  The sauce drowns the parasitic wasp and cures their odor. 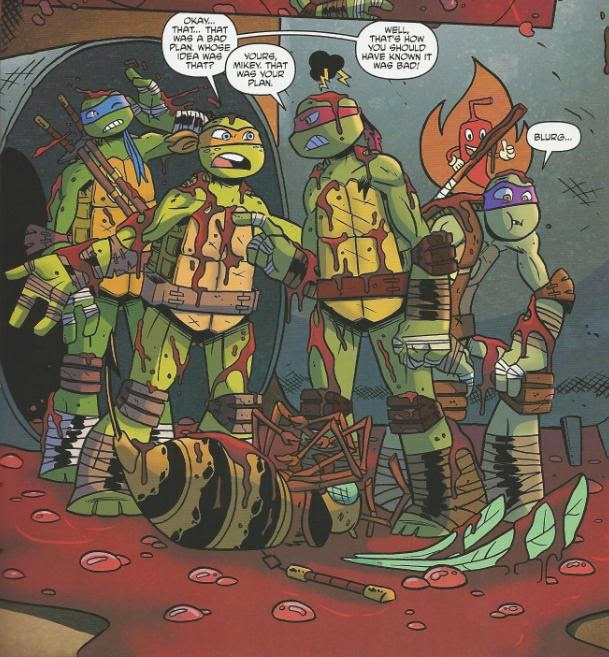 Back in the lair, the Turtles are suffering the aftereffects of a million bug bites.  April nurses them back to health and complements Donnie on his new scent, as she loves the smell of hot sauce.  Donnie immediately begins brainstorming a brand NEW pheromone spray that incorporates hot sauce, much to the rage of his brothers.

*This story is continued from TMNT New Animated Adventures #13.  The story continues in “Mikey & the Machine”.

This was probably one of the cornier scripts to come out of New Animated Adventures.  It follows a rather stagnant screwball formula and you could predict the comedy and conflict beats pages before they happened.  Of course the perfume would attract the wrong thing and of course the Turtles would accidentally spill it on themselves and of course they’d find a convenient cure in the final stretch of panels.

But like a lot of clichés, it really depends on how well you execute them.  I mean, it’s not like New Animated Adventures is the only medium still running the “perfume mishap” scenario into the ground.  Mickey Mouse cartoons are still drawing from that well, even the ones made this same year.  It’s a stock plot that’ll never go away, right alongside the shrinking episode and the one where the guy’s mom comes to visit but he told her he was a bigshot in letters to impress her so now all his friends have to pretend like he’s the boss or something and at the end his mom finds out everything and tells him she’s proud of him no matter what.  Whew!

As for the execution… eh.  It hits all those beats so routinely and formulaically that the end result is a very bland story that’s not particularly funny or original.  Walker has written a lot of good scripts in both the US and UK Nick TMNT comics, but this just happens to be one of his off days.  I did like the reappearance of one of Baxter’s parasitic wasps, though.  A nice callback to a good, but mostly forgotten season one episode.

Chad Thomas is really rising to the top of the New Animated Adventures talent pool.  His characters have a lot of energy to them and he uses those “anime” effects from the animated series, but only to a strategic extent.  It’s nice when they’re used, but not to the point of suffocating all the art.

Grade: D+ (as in, “Donatello basically tried to create the kid’s cartoon equivalent of a roofie for April.  Stay classy, Donnie”.)