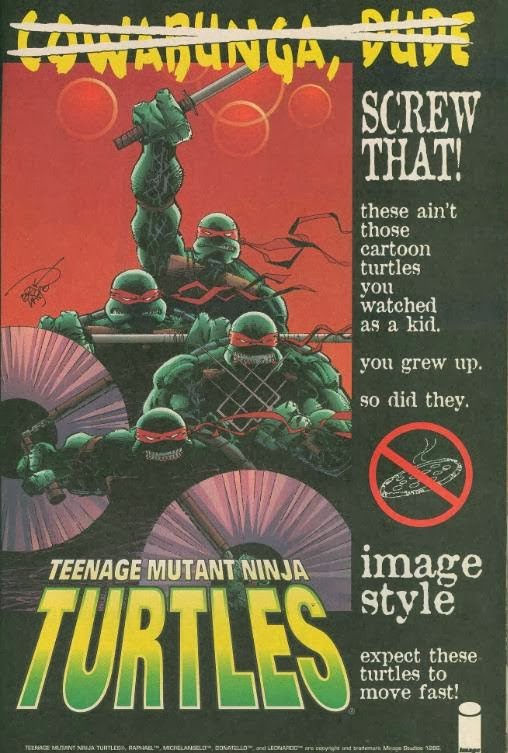 Posted by Mark Pellegrini at 1:59 PM

hey man this might be off topic but i was wondering what the tmnt last of the viking heroes is? And does it fit in a timeline or is it its own seres? And well we are on the topic what is creed? im sort of stomped.

The TMNT made guest appearances in two issues of Last of the Viking Heroes Summer Special #2 and 3 (which were then collected in a limited edition hardcover).

It was just one of many random indie comic titles they appeared in.

Likewise, the Creed/TMNT #1 one-shot was a similar deal.

You can find a shockingly comprehensive list of every comic they've ever appeared in here:

Many of those appearances consistute brief cameos or just pin-up art in the back of the book, mind you.

I am currently up to issue 15 on my first ever read through of volume 3, and I have to say, I dislike it quite a lot. I have basically skimmed the past couple issues because I just couldn't bear it any longer, but still wanted to be able to say I at least have been through every issue. The artwork is terrible, I think, and hard to make out what the heck is going on a lot of the time. The characters are uninteresting and boring, and the stories over all are pretty much in the same sentiment. Just thought I would give my 2 cents worth! :P

I think someone flubbed on the timeline. They turn 18 at the very beginning of this series. They started the series at 15, so that means that all of volume 1 and 2, including the six month time gap between two of the volumes, would have to be 3 years. They spent two years with April, and apparently two years at the farm, and City at War was several months or so, so another year with the sixth month gap. By the beginning of this story, they should be 20 or so. whaaaat

I guess I can just make a no-prize. Maybe Renet accidentally released some quantum particles or something. Overall I rather enjoyed the Image series. It was some pretty good turtle storytelling, especially the ending.

Do you know that the image comics are being reprinted by IDW in color AND will have the official ending?

I've just recently finished reading the Image run and overall I felt it was a failure, sadly. Despite their best efforts it never really felt like it got into a groove.

Part of the issue was sloppy characterisation. I hated the way the Turtles in this series were constantly beset by life-changing, traumatic incidents - Don's "death", Raph's scarring, Leo's hand, etc. which they hardly seem to react to most of the time. It just leaves you with a feeling that nothing that happens, no matter how extreme, really matters that much, as if it's all just "same shit, different day." It makes it that much harder for the reader to relate to the characters if they don't behave in a way that's remotely believable.

I'm also not a fan of the shoe-horning in of a bunch of Image guest-star characters who we're supposed to react with glee too when they appear - "Ta-da, it's these guys!" - when I'm certain most readers would have no clue who any of these schmoes are. It felt like too much of a truncated run was taken up with these fan-servicey cameos when the comic really should've been focused on the turtles and their stories.

I believe TMNT has always worked best when it's balances quieter, more grounded storylines with the action-heavy, crowd-pleasing stuff. With this run the craziness is pretty much cranked up to eleven from the first issue and it never really stops, it doesn't feel like there's a moment to slow down and reflect on all the madness going on, which is maybe why the storytelling suffers - it has no breathing room. It seems like Carlson & Larsen were intent on making a big impact early on, but maybe they should've walked before they ran.

So you guys didn't like it. Welcome to the minority.