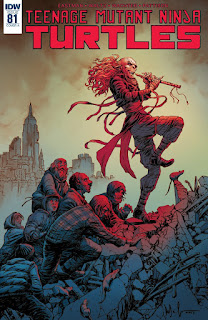 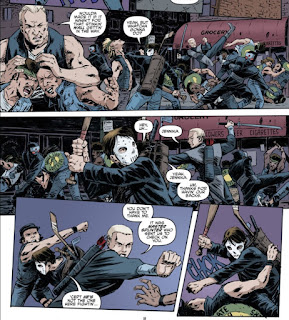 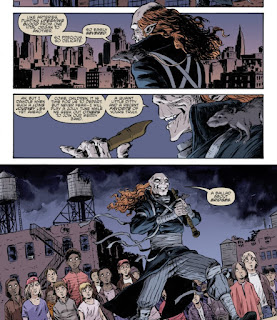 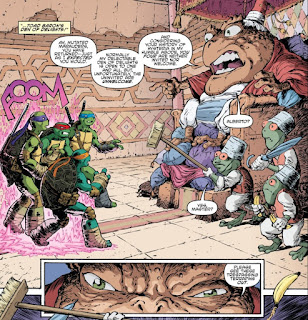 Posted by Mark Pellegrini at 9:03 PM

Very excited to see how this arc turns out. While I do get that the Rat King being shoved out of the spotlight would be pretty disappointing, I'm pleased that the arc also seems to focus on Casey and Hun and the Foot and EPF alliance, since those are probably my favorite story arcs in TMNT IDW. Great review as always!

"Kingdom Of Splinter's Contractual Obligations" is the name of the next story arc. Splinter must successfully renegotiate his contract with Viacom, who wants to force him into a solo spinoff to the "Coming Out Of Their Shells" tour.

I understand it's going to be the darkest arc in the series yet.

The issue's final page—with Alberto and minions dressed in their domestic uniforms and bucket helmets and armed with a push-broom, an umbrella and a banana nunchaku to charge into battle against the turtles—has got to be the most adorable new TMNT page I've seen in months. :D

The Garden State wreckers thing was awful. Waltz is always pretty bad when he tries to write “hood” dialogue, but that especially made me want to crawl in a hole and die.