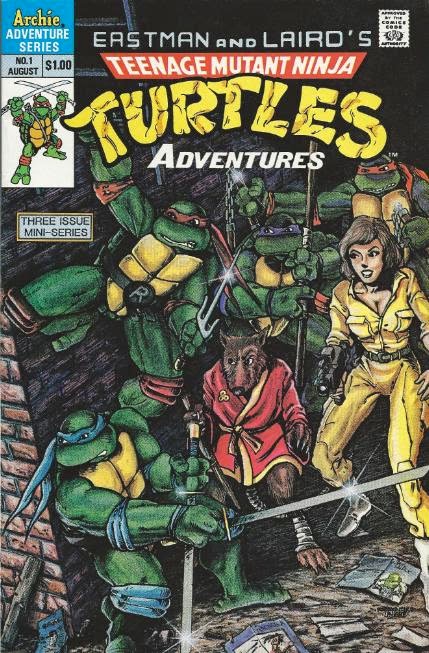 “Heroes in a Half-Shell! Part I”

April O’Neil, reporter for Channel 6’s Happy Hour News, is covering a recent wave of technology robberies that are purportedly the work of ninjas. Never one to let her better judgment stand in her way, she decides to bring a crew along to stand watch over Technologies Central, supposedly the evil ninja thieves’ next target, late at night without any police security. Naturally, a gang of thieves attack her, attempting to send a message from “da big boss man” her way. She escapes into the sewers, where the gang follows her. If you can’t guess what happens next, April is rescued by the Teenage Mutant Ninja Turtles: Leonardo, Raphael, Donatello and Michaelangelo! April promptly faints as a mysterious chrome-plated menace watches from a video monitor. 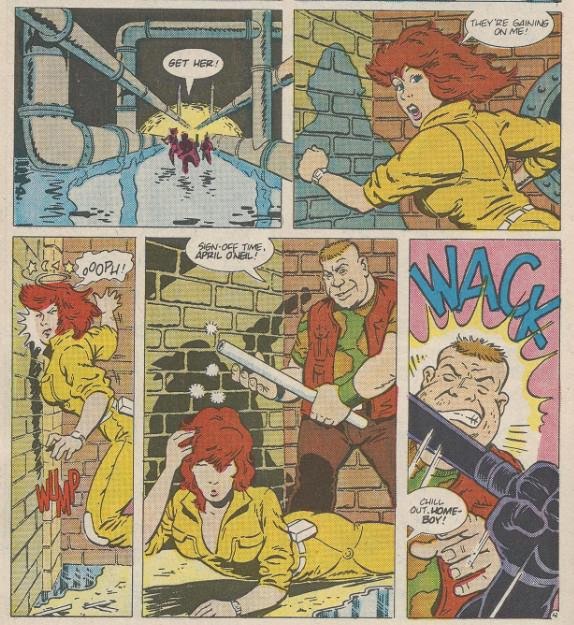 April awakens a short time later, now in the comfy sewer-located abode of the Turtles. She is introduced to their ninja sensei, Splinter, who explains their story to her. Splinter was once a man named Hamato Yoshi, who lived in Japan and led a ninja clan known as the Foot. His rival, the scheming Oroku Saki, framed him for the attempted assassination of a great master teacher who was visiting the clan. In disgrace, Yoshi was exiled to America to live in the sewers, while Oroku Saki rose to leadership of the Foot and turned the once peaceful organization toward crime. Within the sewers of New York City, Yoshi befriended many rats until some little twerp dumped a bowl of baby turtles on him, burdening him with some new pets. A short time later, he found the turtles covered in a strange glowing ooze, which transformed them, passing on the traits of the animal they’d most recently been in contact with (a human). Yoshi touched the gunk, and having most recently been in contact with the rats, was mutated into a rat-man, whom his new Teenage Mutant Turtle wards nicknamed “Splinter". Splinter then trained his new green pupils in the ways of ninjutsu and named them after his favorite Renaissance painters. The culprit who poured the mutagen into Hamato Yoshi’s home remains a mystery, though the Turtles have sworn to track him down and force him to return Splinter to normal. 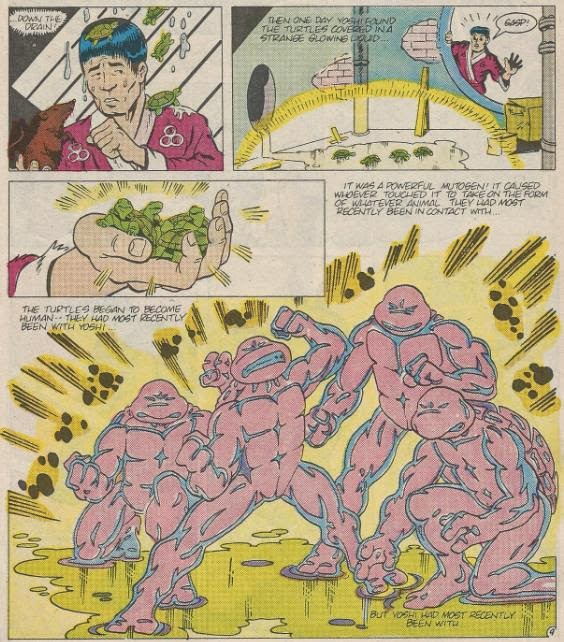 April decides that this is the best story since Al Capone’s vault and makes a break for it, only to be halted by Donatello, who won’t let her leave until she agrees to keep their secret. Some time after that, they come to a bargain and concede to help April get a better story: the secret behind the gang of ninja thieves. Elsewhere, the gang members apologize to their master, the razor-sharp Shredder, who wants to know if the heroes who defeated them looked like Turtles.

Back where the Turtles first met April, they look for clues and happen upon a matchbook for a place called “Ninja Pizza”. Never ones to turn down an opportunity to eat pizza, the Turtles head topside. April finds them some trench-coats and fedoras to conceal their identities and the group then make their way through Manhattan’s infamous ninja district. Wait, what?

As the Turtles stuff their faces at Ninja Pizza, April takes a walk and happens upon Manhattan Security where she discovers that it is a front for the ninja thieves that have been looting technology companies. Before she can get the news back to her boss, she’s captured by a gang of Foot Soldiers! 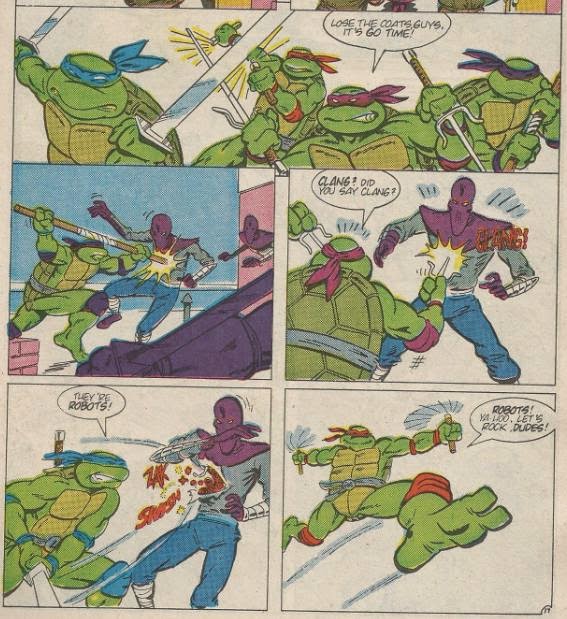 The Turtles go to hunt her down, following her trail to the roof of a six-story building. They find April bound and gagged, but not alone. They’re quickly besieged by a horde of Foot Soldiers, and after Raph tries to disembowel one with his sai, learn that they’re all robots! The TMNT make short work of the robots, rescue April and follow the remaining Foot Soldiers back to the Manhattan Securities building. They chase them inside and discover much of the stolen tech gear, including a two-way video system which gives them their first peek at Shredder! After Shredder lets slip that they mustn’t find his "Technodrome", the Turtles quickly race downstairs. Their trip is a short one, as the Foot Soldiers flood the building, destroying it, and send the Turtles back to the roof for a narrow escape.

Back at the Turtles’ Lair, they show a Foot Soldier uniform to Splinter who recognizes it as the uniform of the Foot Clan, thereby deducing that Oroku Saki must be near by. The Turtles take the potential threat in stride as they help themselves to another pizza.

The following morning, the Turtles and April traverse the sewers in search of the Technodrome, but only find a yawning cavern where it used to be. Back at the Technodrome (a massive cyclopean mobile fortress), the Shredder laments his defeat, only to be harassed by the whining of Krang: a bodiless brain-squid thing. Krang demands that in exchange for all the technological weaponry he has lavished upon him, that the Shredder live up to his end of the bargain and build him a body. Shredder refuses, citing the presence of the Turtles as too much of a threat. Krang reminds him that he created the Turtles when he tried to kill Hamato Yoshi with the mutagen. Shredder then gets the idea that he should one-up Splinter and the Turtles by mutating some of his gang members into fiercer mutants. 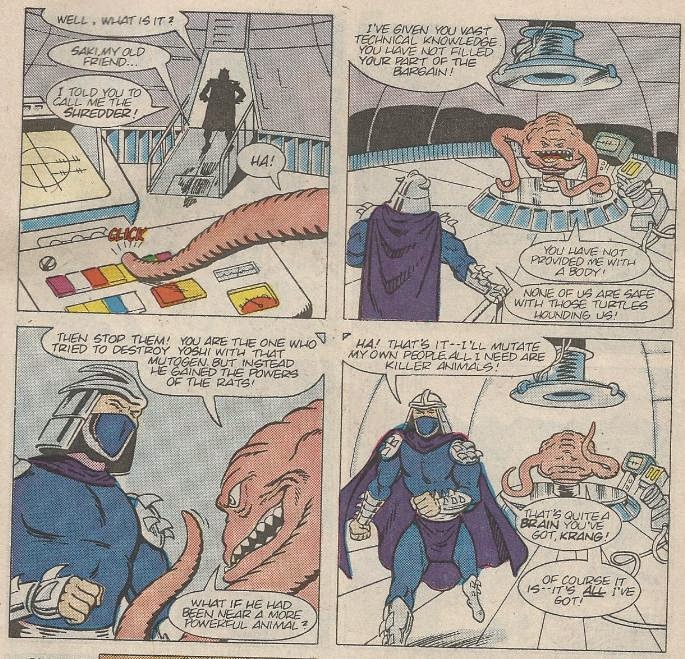 Elsewhere, the Turtles and April fetch Splinter to help them track the Technodrome. Meanwhile, at the Central Park Zoo, two of Shredder’s robots kidnap a rhino and a warthog. Shredder then enlists the aid of two of his gang members, Bebop and Rocksteady, whom he prepares to mutate into more powerful henchmen. 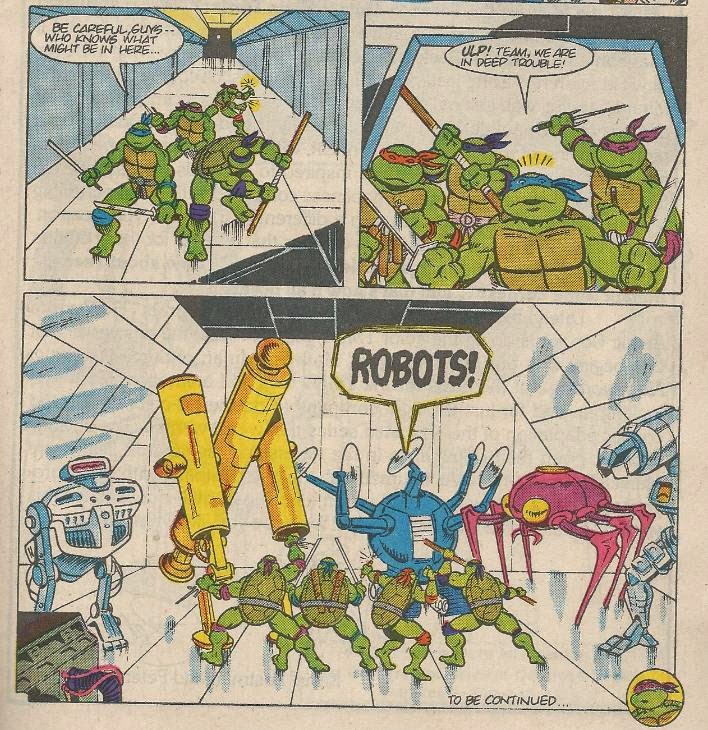 As Splinter crawls through rubble and debris en route to the Technodrome, the Turtles and April take a detour to the surface. As April checks in with her boss at Channel 6, the Turtles try not to get flattened by traffic. April follows a lead to the Central Park Zoo, which eventually leads to the Technodrome. The Turtles find Splinter’s walking stick, learning that only a few minutes before their arrival, he had been kidnapped by more of Shredder’s robots. The Turtles enter the Technodrome to investigate, only to be confronted by a horde of giant, killer robots.

*This story is continued in TMNT Adventures (miniseries) #2.

*Chapter One of this story adapts the episode “Turtle Tracks” of the Fred Wolf TMNT cartoon.

*Chapter Two of this story adapts the first half of the episode “Enter the Shredder” of the Fred Wolf TMNT cartoon.

*Elements of the origin story will later be retconned in TMNT Adventures #45. Also revealed in that issue, the great martial arts master was named "Grand Master Yamaguchi" and Yoshi's pet rat was named "Ogata".

*Graffiti sprayed across a brick wall features the name “Bugman”. Bugman was a character who appeared in a few episodes of the TMNT cartoon series, but never made it into the Archie comic. More likely, they reference is to Michael Dooney-himself, who often went by the name "Bugman" at the Mirage offices (at least according to Peter Laird, he did).

*CHET ALERT: Also sprayed on the wall is the name “Chet”. Chet was a name the Mirage crew enjoyed using frequently as Easter Eggs in their books because...they just liked the name.

*This issue was reprinted in the UK by Fleetway in TMHT Adventures #1.

There isn’t much to say about the original TMNT Adventures miniseries, or the first four issues of the on-going, for that matter. They simply adapt episodes of the 80’s cartoon, albeit in a fairly condensed fashion, not leaving a lot of room for originality. A lot of kid’s comics do this, and I never really understood the point. If they’re watching the cartoon, why would they want to turn around and read it?

Still, it does give us a look at the episode from a different artistic perspective (though the same cannot be said of the recent craze with “Cine-Manga”: comics made up of screencaps from TV shows). So it has that going for it. Also going for it is some mighty fine artwork by legendary Turtles artist and Mirage staffer Michael Dooney. His work here is simplified from his typical efforts, as he has no choice but to mimic the often “silly” character designs from the cartoon. This is by no means his finest work, but his art remains more than serviceable. The cover, by Eastman and Laird, gives us a rare look at the various TMNT cast drawn by their creators but in the style of the original cartoon.

As an adaptation, it manages to keep most of the better or more important parts of the episodes intact. Unfortunately, most of what was cut for space were the better gags and humorous situations, such as the gun-toting granny. Most of the fight sequences, such as the rooftop battle with the Foot Soldiers, are also cut short for the sake of space constraints, rendering them fairly unremarkable despite some dynamic art by Dooney.

As far as the story goes, it’s the typical introduction/info dump. We get the origins for all the characters and a general idea of the story direction, with that being about it. The story works well in animated form, don’t get me wrong, but when diluted to its bare minimum for use in a different medium, you can see how thin it really is.

All-in-all, I’m not going to have a lot to say about these first few issues. If you’ve seen the episodes then you might as well skip these stories, since to be frank, they worked a lot better in animation.

Grade: C- (as in, “Can someone tell me what happened to Shredder’s secretary? She’s never seen again in the cartoon or the comic”.)