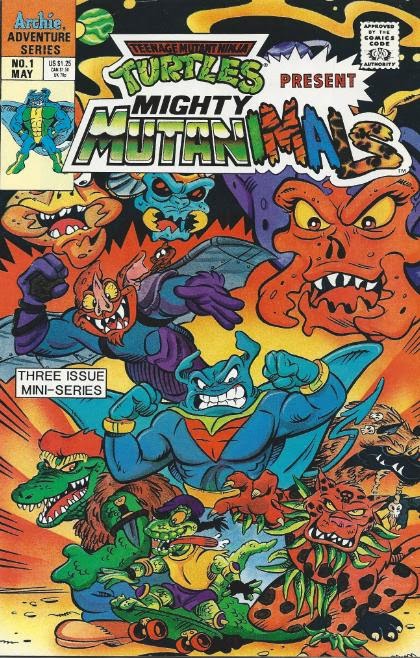 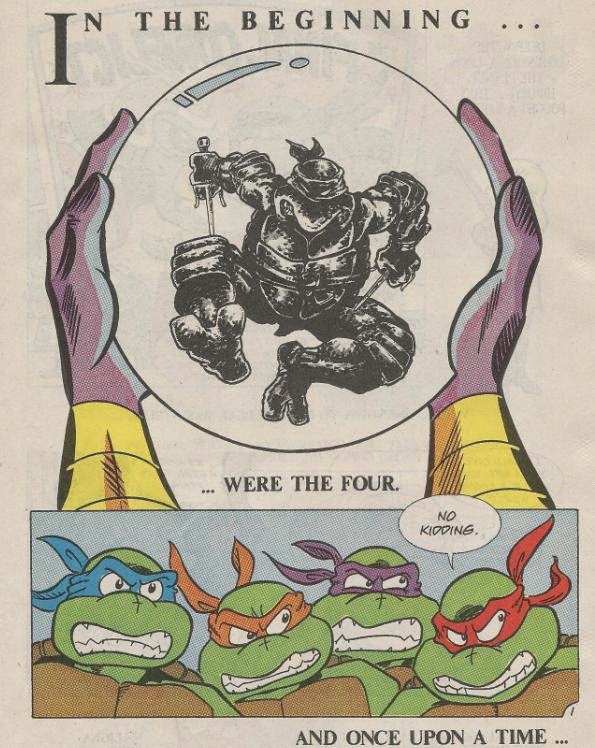 After a recap of the important events leading up to this issue, we rejoin Jagwar, Dreadmon and Man Ray on the South American beach as they observe the strange meteorite crack open. The meteorite turns out to be an “egg” full of Maligna’s spawn: weird blue caterpillars.

Speaking of Queen Maligna, back at her outer space headquarters, she has Stump and Sling held prisoner. She isn’t pleased with their interference during the battle of Hirobyl and sentences them to be burned alive in her furnaces. As they’re being dragged off by guards, the two tree-guys are rescued by their employee, Leatherhead. As Leatherhead wrestles with the guards, Wingnut and Screwloose swoop in and airlift Stump and Sling out of the fracas. They all manage to escape through a window and into the maw of Cudley the Cowlick. 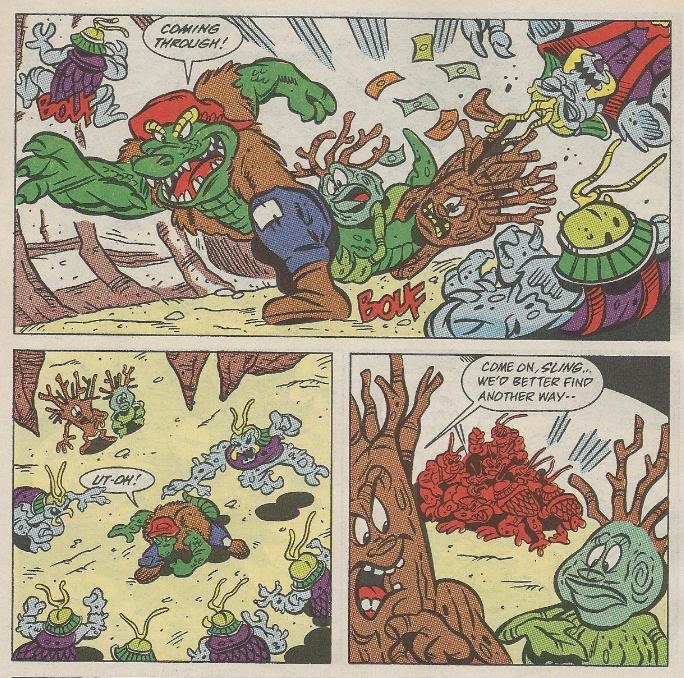 Back at Null’s corporate headquarters in New York City, the Turtles, April, Splinter and Mondo Gecko have been subdued and tied-up by Null, Skul and Bean. As Kid Terra comes to, he makes up a hasty (and fake) excuse that he was trying to take down the Turtles for Null when Raph took him by surprise. Null gloats over his victory and then leaves with Skul and Bean to finalize the sale of planet Earth to Queen Maligna. Left alone, Splinter asks everyone to stop struggling and create an environment of tranquility so he can focus on mentally summoning some back-up.

At the Stump Arena, Stump tells what he knows of Maligna’s plot to Leatherhead, Wingnut and Screwloose. The three anthropomorphic animals aren’t about to let anything happen to Earth, so they hitch a ride there with Cudley the Cowlick. The ride is an unpleasant one, though, as Cudley is shot down by one of Maligna’s ships. 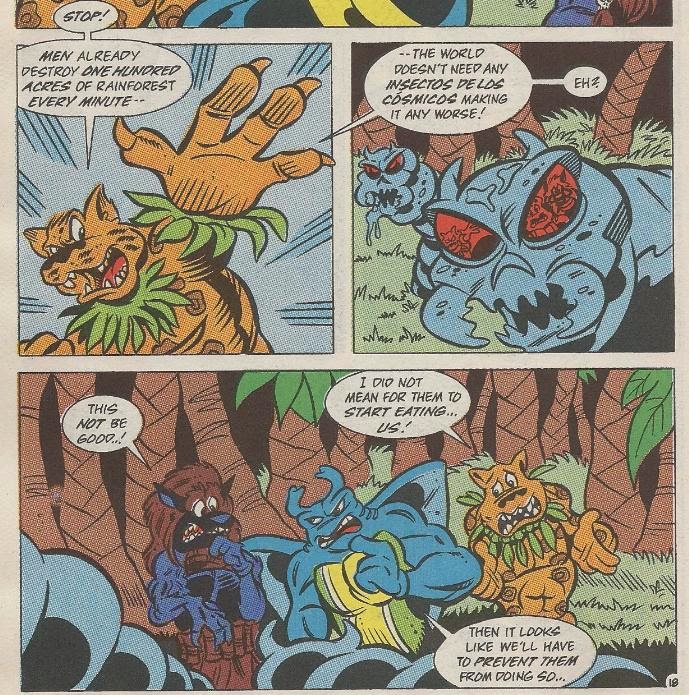 On the South American shore, Man Ray and friends inspect the meteorite “egg” and find the last remaining “caterpillars” feasting on their dead brothers (yuck). They then follow the caterpillars and find them munching down the rainforest. The environmentally-minded Jagwar protests, resulting in the hungry caterpillars stampeding toward him and his friends. 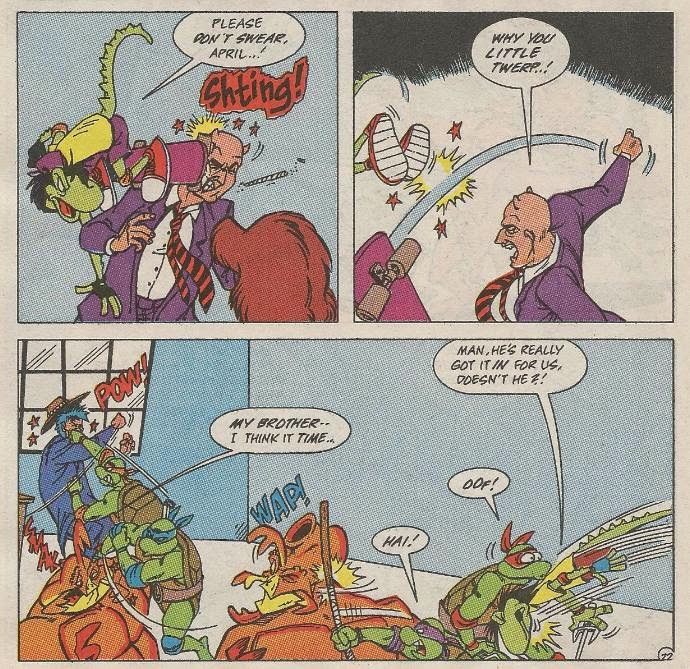 At Null’s building, Splinter’s back-up arrives in the form of a pack of rats. The rats chew through their bonds, setting the heroes free. The Turtles grab their weapons (which Kid Terra “accidentally” left in the room with them) just as Skul and Bean return. Better prepared, the Turtles put up a better fight with the aliens this time around. Bean then fires another smoke-bomb from his head and when the fog clears, the Turtles are left to watch as the bad guys escape in their spaceship. As the ship zooms off into the distance, Splinter realizes that both Raph and Mondo have stolen away on it.


In South America, Man Ray, Dreadmon and Jagwar flee the approaching bugs, only to stumble upon the downed Cudley amongst a field of grazing cattle.

*Krang struck a deal with Queen Maligna in TMNT Adventures #12.


*Though not named in this issue, Maligna's base is called the "Wyrdwind", a name which comes from the TMNT Mutant Universe Sourcebook #2.


*Wingnut, Screwloose, Leatherhead, Stump and Sling were last seen during the battle on Hirobyl in TMNT Adventures #13.

*This issue also featured pin-ups of Jagwar and Dreadmon by Stephen R. Bissette.

Things start off hard and fast with this first issue of the Mighty Mutanimals miniseries. This issue follows up on a lot of previous plot threads, making it fairly inaccessible to new readers (despite #1 issues typically implying a fresh jump-on point for newcomers). But, such is the comic book industry. For those who have been reading since day one, this is a real treat.

The opening prologue covers the major events from the previous issues (presumably narrated by Cherubae, as the artwork implies), reusing panels from the issues rather than commissioning new artwork. It’s funny, as it gives us panels by Jim Lawson, Garrett Ho, Ken Mitchroney and even Peter Laird and Kevin Eastman (an old image of Mirage Raph appears on the first page). Surprisingly, save for the in-joke with Mirage Raph, none of the differing artists really clash with one another.

The story in this issue covers a whole lot of ground, basically working toward the three (or four or even five) separate parties progressing toward one-another. While it gives a “mile-a-minute” effect, the issue still feels well-paced and very even in regards to the distribution of character threads. Also, save for a brief line by Jagwar about mankind destroying a hundred acres of rainforest a minute, Clarrain (Murphy) refrains from his usual “slap to the face” environmental preachiness.

The art duties for this issue were split between Garrett Ho and Ken Mitchroney, but done in a manner so that their different styles manage to meld. Each character thread is, as of right now, isolated from the other without any of the characters (save Cudley) interacting. This way, Ho and Mitchroney’s styles blend without incident. Garrett Ho’s style is growing on me a lot quicker than I had anticipated. His Turtles were really my only complaint, but I’ve found myself no longer being bothered by their somewhat awkward faces.

This issue also features two pin-ups by one of the best horror artists in the comic book industry, Stephen Bissette. His Jagwar and Dreadmon both look suitably freaky, making this a bonus feature throughout the miniseries I whole-heartedly enjoy. If you don’t recognize Bissette by name you’ll likely recognize his unmistakable style as seen in Alan Moore’s epic run on Swamp Thing or in the pages of Heavy Metal.

Grade: A (as in “And they have you thinking Jagwar and Dreadmon are all cute and cuddly until BAM! The last couple pages reveal that what they really want is to eat your brains”.)
Posted by TMNT Entity at 1:18 PM