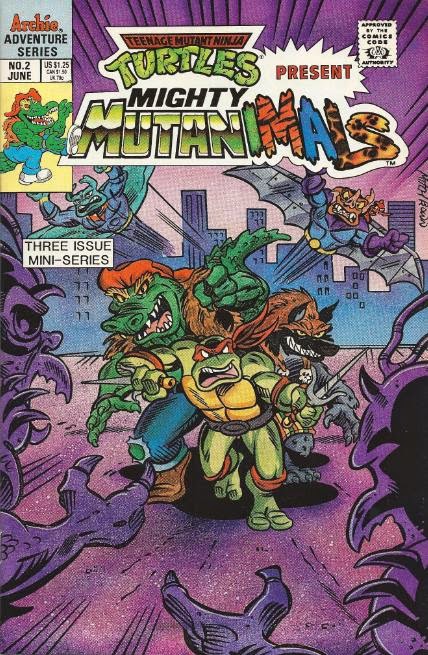 “Under a Big Black Sun”

At the Hive World, Queen Maligna probes the mind of one of her children and discovers that he successfully shot down Cudley the Cowlick. Grateful, she rewards her child by eating him. 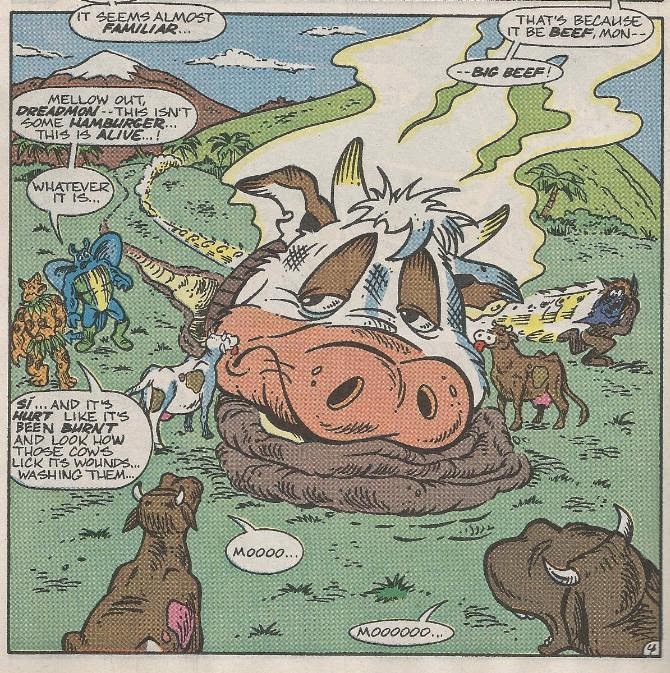 In the Amazon, Jagwar, Dreamon and Man Ray are investigating the downed Cudley, who is having his wounds licked by several local bovine. They quickly make friends with Cudley, only to be ambushed by Leatherhead, Wingnut and Screwloose, who haven’t figured that part out yet. The mutants brawl with one another until Cudley screams some sense into them, redirecting their attention to the forest full of cocoons which were formerly Maligna’s caterpillar-like spawn.

On Skul and Bean’s ship, Null is ecstatic over the prospect of taking his business into outer space; a goal he had been striving for even before be met Maligna’s stooges. Meanwhile, Kid Terra sneaks Mondo’s skateboard over to Mondo and Raph, who have stowed away on the ship. Terra silently gives them a thumbs up, thoroughly confusing the two heroes. The ship then docks at the Hive World. 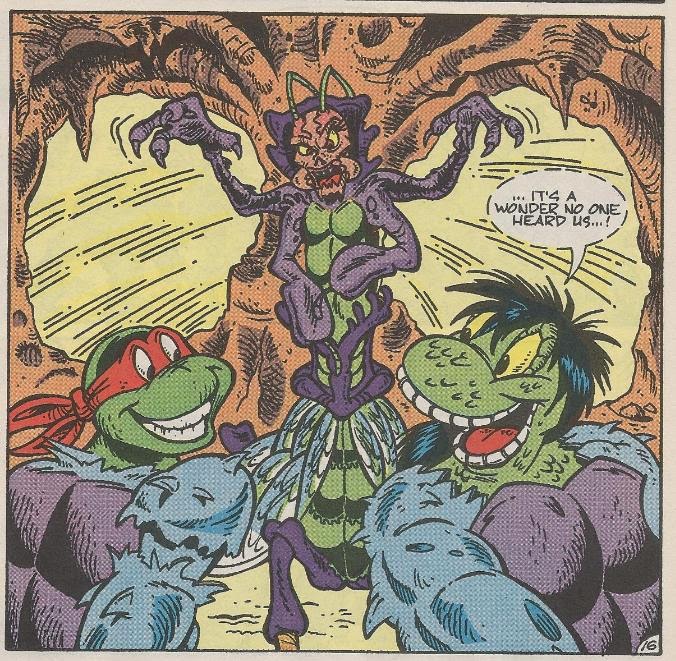 After everyone has left, Mondo and Raph sneak out. Knocking out a guard, they find the exoskeleton leftovers of several of Maligna’s children whom she had devoured. They slip into the exoskeleton “armor” (though Mondo remarks at how creepy what they’re doing is) and skulk around the Hive before being sniffed out by several guards. They defeat the guards and begin gloating over their easy victory, unaware that Queen Maligna lurks behind them.

That night, Jagwar tells the story of how he came to be. His mother, seeking enlightenment, journeyed to a temple deep in the Amazon to commune with the Jaguar Spirit (named Yaguaro). The two fell in love (um…bestiality?) and eventually spawned Jagwar. After his twelfth birthday, Jagwar’s mother traveled north to seek further enlightenment while his father journeyed into the heart of the rain forest in an attempt to keep it alive. 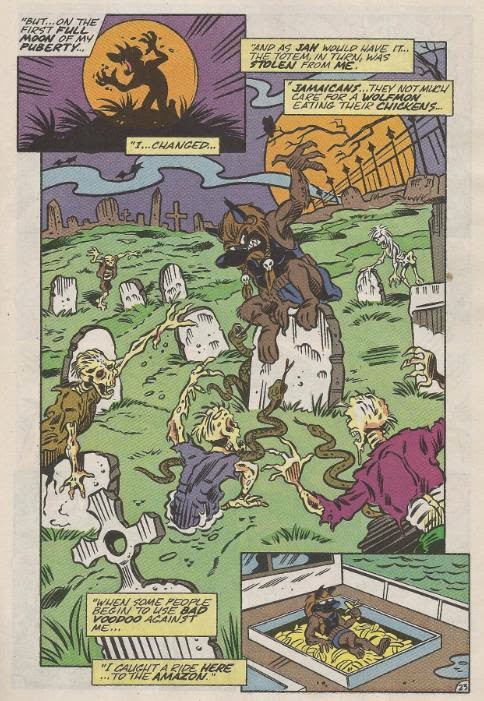 Dreadmon then picks up the cue to spin his yarn. His family originated from South Africa, where his father was a fierce opponent of apartheid and segregation. When things became too dangerous, he sent “Dreadmon” to live in Jamaica (in poverty). “Dreadmon” grew to resent the rich white tourists and began stealing from them, eventually acquiring a totem of a Tasmanian wolf from an Australian sheep rancher. The totem gifted him with super speed, but cursed him by transforming him into a wolf-man after the first full moon of his puberty. The totem was subsequently stolen from him, leaving him stuck that way. After the locals began threatening him with bad voodoo, Dreadmon fled to the Amazon.

Storytime is suddenly interrupted by the return of Wingnut and Screwloose. They alert the mutants to the awakening of the cocoons. The heroes then prepare to make their stand.

Back at the Hive World, Queen Maligna pounces on Raph and Mondo. The pair put up a fight, but are eventually subdued. As she orders them to be put in prison cells and fattened up for her feast, Maligna announces to Skul, Bean, Null and Terra that they have at last arrived at planet Earth.

*The fate of Jagwar’s mother will be followed-up on in Mighty Mutanimals (on-going) #1.


*The Jaguar Spirit is not named in this issue. His name, Yaguaro, comes from TMNT Mutant Universe Sourcebook #2.

What interests me most about this issue isn’t so much the escalation of the main plotline, but the brief origin stories provided for Jagwar and Dreadmon. When they were introduced, neither character ever bothered to explain where they came from or how they came to be. These weird mutant guys were just running around out there and we were told to roll with it. It was a relief to finally see their origins touched upon.

Jagwar’s origin is…interesting. While the thought of a jungle girl getting her freak on with a jaguar isn’t exactly a pleasant one, the dangling plotline revolving around the whereabouts of Jagwar’s mother will initiate the first story arc of the upcoming Mighty Mutanimals on-going series, so it at least has some great story potential. Dreadmon’s origin, on the other hand, feels a bit too reminiscent of Leatherhead’s. Clarrain (Murphy) addresses that to an extent, with Leatherhead making an amusing remark about “bad voodoo”, but that doesn’t really change the fact that the source of their mutations are pretty much identical.

The art in this issue is somewhat strange, to put it lightly. Mitchroney does his usual thing, but unlike his previous offerings, his art here is slathered with tons and tons of excessive crosshatching. While it does darken the art, the “grittiness” just clashes with Mitchroney’s whimsical style. I honestly don’t know if the overabundance of crosshatching is the work of Mitchroney, trying out a new style, or if it was added by the inker, Art Leonardi. Considering Leonardi is new to the book, and the crosshatching doesn’t appear on any of Mitchroney’s other work, I’m enticed to go with the latter option.

So far as the actual story goes, Mighty Mutanimals #2 kind of suffers from what a lot of middle portions of trilogies do, and that’s a sense that the story is just trying to kill time before the finale. While the origin stories were a nice diversion, the actual plot revolving around Maligna doesn’t seem to advance very much. I wouldn’t go so far as to call the middle portion of the miniseries “weak”, but it is probably the least exciting issue in the series.

Grade: B- (as in “Because campfires are always the best place to tell your origin. Just ask the Teen Titans”.)
Posted by TMNT Entity at 6:58 PM