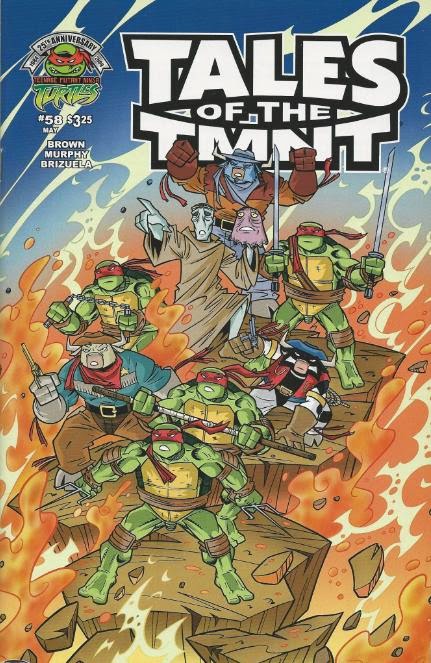 Frontispiece: Leonardo recalls some of the batshit crazy creatures he has met in his many adventures, both good and evil, as he, his brothers and a very young Shadow get better acquainted with Cudley the Cowlick.

Down on Earth, the Turtles, Casey and the Utrom Glurin are tracing the whereabouts of the Utromi Preservi, who had stolen the Cosmic Stigmatifier Monitor from Glurin's lab, and find they’ve gone to Alpha Centauri. Since the Preservi had also stolen the powerful Crystal Shard from Moo Mesa in their last encounter, the group decides to split up. Leo, Don and Glurin take a spaceship and go to Alpha Centauri while Mike, Raph and Casey cross dimensions with Don’s Gridshift remote to warn the C.O.W.-Boys over in Moo Mesa.

Leo and the others arrive safely in Alpha Centauri, only to discover the fleet of Preservi cruisers using the Cosmic Stigmatifier Monitor to open a weird rift in reality. One of the Preservi flies into "the singularity" and launches a missile containing the Crystal Shard. A few seconds later, he returns from the singularity…dead. He was successful in his endeavor, though, and out of the singularity comes a gigantic sarcophagus: The sarcophagus of the Space Vampire. They intend to use its power for themselves. Or something. 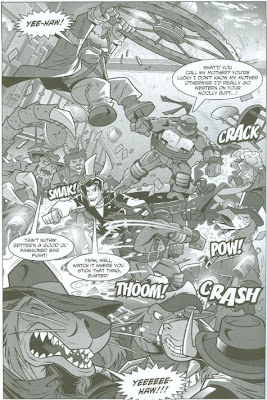 At the Tumbleweed Saloon in Moo Mesa, Mike, Raph and Casey are engaging in a good ole fashioned brawl with such nasties as Saddle Sore and Boot Hill Buzzard, among others, as Lily Bovine watches on with little amusement. However, the C.O.W.-Boys (Marshal Moo Montana, the Dakota Dude and the Cowlorado Kid) quickly arrive and break up the act.

Back in space, the Preservi have noticed Leo and the rest and open fire, destroying their ship. The trio bail out in their spacesuits just as the sarcophagus of the Space Vampire opens up, unleashing Galactose (who looks like a not-so-subtle cross between Galactus, Annihilus and a bat), who now wields the power of the Crystal Shard.

Back in Moo Mesa, the Turtles are in the middle of explaining what’s happening to the C.O.W.-Boys when the Sacred Cave (where the Muta-Crystal is buried) begins to glow like crazy. They arrive at the cave to investigate.

Back in space, Galactose has added the Shard to his “Chaos Scepter” and is draining the life from all the Preservi. He then turns his attention to the Turtles and fires, but luckily for them, Cudley the Cowlick arrives at the last second and whisks them away from the danger. Inside Cudley’s mouth, the Turtles are reunited with Ola of the Una, who is still clinging to life. Ola explains that she has survived because she still has a purpose and it involves the Shards of the Muta-Crystal and their profound link to one-another.

As she explains this, Galactose begins to drain the life from a nearby planet: Earth. When Galactose feeds, he becomes capable of tearing open the space-time continuum, granting him access to parallel versions of the world he’s devouring. With the power of the Shard, Galactose also has a clear path back to Moo Mesa for further nourishment. Cudley takes the gang to Moo Mesa where they reunite with the other Turtles, Casey and the C.O.W.-Boys. Unfortunately, the Muta-Crystal is glowing because it is drawing Galactose near. The guys escape the cave just as it collapses, only to find Moo Mesa crumbling to pieces thanks to Galactose. 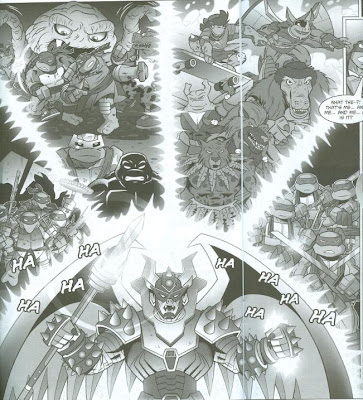 As reality shatters to pieces, the Turtles see versions of themselves from all across the multiverse: very awkwardly drawn versions of themselves (from TMNT (Vol. 1) #1), themselves in wacky wrestling costumes battling Krang, Bebop and Rocksteady (from TMNT Adventures #7), the Mighty Mutanimals (from, uh, The Mighty Mutanimals), and a sharp-looking version of themselves with pupils visible through their bandanas (presumably from the 2007 Imagi TMNT film). Thinking fast, Don takes the Gridshift remote, adjusts it and zaps himself, his brothers, Casey and Glurin away...leaving the C.O.W.-Boys to die. Nice.

We’re taken back in time, to when Don, Raph, Ola and the C.O.W.-Boys failed to stop the Preservi from stealing the Shard from the Muta-Crystal. Suddenly, Leo, Mike, Glurin and the NYPD Xenosquad (the Police Captain, Sergeant Xitor and Detective Falina) arrive from the future and take down the Preservi with their laser guns, then trap them in a force field. The day saved, Leo explains to past-Don that his future invention, the Gridshift remote, allowed them to travel through time and save the day. The Xenosquad then return to their time and dimension with the Preservi as Cudley takes Ola back to her homeworld to die. As the Turtles bid their goodbyes to the C.O.W.-Boys, a rightfully confused Raph asks Casey what future they will be returning to and whether their future selves will be there. Casey says he doesn’t know, but all he cares about is thanking Don for making sure they have a future to return to.

Meanwhile, out in space, the sarcophagus of the Space Vampire remains undisturbed, having never been opened.

*The Turtle Multiverse will be revisited in the TV movie, "Turtles Forever".

*This issue also featured a bonus TMNT/C.O.W.-Boys pin-up by Fernando Leon Gonzalez (in addition to his back cover).

As you may or may not know, I’m usually very fond of the actual multi-issue story arcs that exist in Tales, as there are far too few of them. This one, however, never really hit it off with me. I didn’t like the C.O.W.-Boys cartoon when I was a kid and wasn’t one of the eight people who read the original comic book series, so I just don’t have any inherent love for the characters or their universe. This issue in particular hardly includes them at all, with them making mostly token appearances and not contributing to the plot in any significant way whatsoever. I mean, the Cowlorado Kid gets only two lines of dialogue in the whole thing! They’re just so superfluous to the story, at least as far as this concluding chapter is concerned.

What this story does do, however, is establish that the TMNT exist in a multiverse (mentioned offhandedly in the past every now and again), somewhat tying all their alternate versions from other media together.  This, at least in theory, opens up the door for future crossovers. I mean, I doubt we’ll ever see a TMNT: The Next Mutation crossover in any of these comics, but I guess it’s soothing to know the possibility exists (or maybe it isn’t so soothing). Oddly, the collage of alternate reality versions of the TMNT includes a glimpse of TMNT (Vol. 1) #1 which, last time I checked, took place in the same continuity as the one these Turtles come from (the Mirage continuity). I guess…just…try not to think about it.

The time jump confused me terribly at first. All four Turtles skip through time on page 31, yet only Mike and Leo come back (and with a bunch of weird characters, too). I had to read it over and over to really get it, but I guess only those two came back so that two Dons and two Raphs wouldn’t be together at the same time. Shit, I don’t know. Time travel gives me a migraine.

Then there’s Galactose and the onslaught of horrible, horrible barnyard puns. All these C.O.W.-Boys crossovers have been polluted with them and you can really tell Murphy’s running out of steam by this point. That three-legged dog joke was a crime against nature. Then there’s Galactose, that oddball parody of Marvel Comics’ Galactus who just came out of freakin’ nowhere. Why randomly parody a cosmic Marvel Comics villain in a crossover about talking animals in the Wild West? Hell if I know. I got the feeling the overtly goofy tone of the story was meant to evoke nostalgia for the often lighthearted TMNT Adventures series, but that may be a bit of a stretch.

On the bright side, we’ve got Dario Brizuela’s excellent artwork to feast upon. I’ve always loved his rendition of the Turtles, with their oh-so expressive eye slits. His version of Cudley is horribly adorable, I’m sad to confess. Or at least as adorable as a severed cow head can be, anyway. His digital shading is excellent and there are some very impressive moments, particularly the big brawl at the saloon. One oddity, though, is Page 15, which is just the bottom half of the last panel of Page 14, blown up to fit an entire page. I imagine this was done in order to allow for the two-page spreads on pages 16-17 and 28-29. Still, they could have done something a little more remarkable than… that.

Overall, this arc has been all over the place. I actually enjoyed it more when it was just a cheesy gratuitous crossover and not a cosmic epic. This last installment faltered pretty badly, shuffling the C.O.W.-Boys off to the background and throwing in some partly incomprehensible time travel mumbo jumbo, all for the sake of a cheap “Hey, remember those other TMNT cartoons and comics?” gimmick. Brizuela’s art is a treat, but it can only do so much.