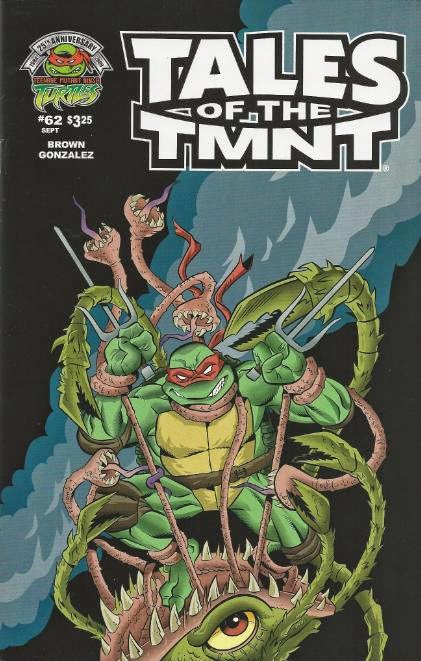 Frontispiece: Sitting atop the head of a giant bunny, Mike explains how even the smallest of critters can have a big effect on people.

Going through a junk closet, Mike finds a photograph of Klunk, his pet cat who was hit by a car some years back. Mike begins remembering how much he loved Klunk and starts to bum himself out. 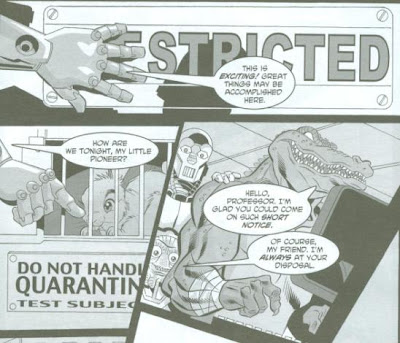 Inside the Utrom HQ in New York, Klag meets up with Leatherhead to continue work on an experiment in mutagen that might lead to the cure for cancer. As he and Leatherhead discuss their findings, Mike gives Klag a call. He’s at a pet shop and is thinking about buying a new kitty, but isn’t sure and just needed to talk to somebody. Klag senses the stress in his voice and decides to see if he can cheer Mike up.

Returning to the Lair, Raph sees how bummed Mike is and offers to take him out for ice cream (aren’t these guys supposed to be, like, 30-something at this point in the timeline?). Just then, Klag shows up and asks Mike if he could watch his “pet bunny” (in reality, a test subject) named “Bunny” for three weeks while he’s away on business. Mike immediately swoons for the adorable furball, though Raph isn’t so impressed and just wants his damn ice cream. Thirteen days later, Raph is ready to sit down and watch some football, but Bunny (who has been bugging him for two weeks) won’t get out from under his armchair. After getting bit, Raph begins to threaten Bunny. Bad move, as she mutates into a giant rabbit monster and attacks him. Raph fights Bunny out into the sewers, only to lose her and suddenly be attacked by some weird clam-octopus-monster-thing. Raph escapes it, but as soon as he turns the corner, he’s attacked by an even uglier giant multi-faced monster.

Back at the Lair, Mike returns with some carrots for Bunny. He suddenly receives a call from Leatherhead, saying that he isn’t sure if Bunny was “ready” to be removed from observation and that he needs to come collect her immediately. 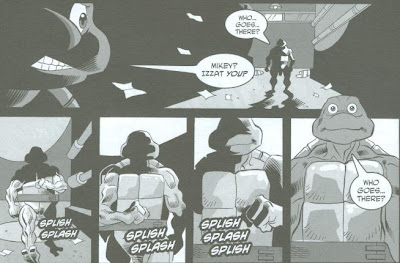 In a sewer tunnel, Raph bumps into Mike. “Mike”, however, won’t stop saying “Who goes there?” Naturally, he turns out to be Bunny-in-disguise, who succeeds in swallowing Raph whole. The real Mike at last arrives, only to find both Raph and the adorable fuzzy Bunny sitting in a puddle of goo together. Unaware of the goings-on, Mike accuses Raph of antagonizing Bunny and picks her up and carries her back to Leatherhead, who has just arrived at the Lair. Depressed to see Bunny go, Mike comes to the conclusion that no pet can “replace” another. Raph, having just battled a horrible shape-shifting monster, is inclined to disagree.

*This issue takes place during the six month time gap in TMNT (Vol. 4) #5.

*The Utroms promised to work with Earth's scientists to find a cure for cancer in Michelangelo: The Third Kind #1.  They'll be shown working further on the project in Tales of the TMNT (Vol. 2) #68.

*Among other things in Mikey’s junk closet, you can see a Gamera video (with the Japanese written correctly!), a piece of the Shredder’s armor (likely collected after their battle in TMNT (Vol. 1) #1) and the Thieving God Idol (from Tales of the TMNT (Vol. 1) #3).

*CHET ALERT: The pet shop Mikey visits is called “Chet’s Pets Plus”. “Chet” has been a running gag in TMNT comics for decades and tends to pop up everywhere.

*Bunny-Mike’s repetition of “Who goes there?”, and the whole shape-shifting monster angle, are taken from the classic John W. Campbell Jr. story “Who Goes There?” (Campbell even gets a name drop in this issue!). For the unenlightened, “Who Goes There?” was adapted into the feature films "The Things from Another World" and “The Thing”.

I have nothing inherently against comedy relief issues, but unless they’re side-splittingly hilarious, they’re doomed to be forgotten and/or relegated to the “filler” category (and I’m aware that “filler” is considered a naughty word by the Mirage guys; I apologize).

The plot of “adorable pet turns into hideous monster to terrify one guy when nobody else is looking, then changes back to normal when they do, leaving everyone to think that one guy is a liar” has, for all intents and purposes, become a cartoon cliché along the lines of “the episode where everybody shrinks”. The Real Ghostbusters did it way back when with “Victor the Happy Ghost” and it’s been something of a staple in the animation industry ever since, becoming sort of a standby when the writers are short on ideas. So needless to say, it’s been done before. A lot.

What “Adventures in Bunnysitting” really offers, though, is a call-back to a plot point established in Tales of the TMNT (Vol. 2) #9. An excellent and emotional story, I’m not sure it really needed an entire issue to follow it up, but it was rather depressing to see Mike bummed out over a lost pet. It struck a chord with me, since a dog I’d had for 15 years (and since I was 7 years-old) died a year ago. I know some people out there look at pets as “just animals” and don’t really establish very strong emotional bonds with them, but where I come from, pets are family. So I didn’t find Mike’s sudden bout of depression brought on by remembering a beloved pet he’d lost several years ago as “stretching it”. My dog Zoe’s been dead for over a year and it still bums me out when I think about her too much.

If I had any continuity gripes, it would have to be that, once again, we have another issue shoehorned into the gap from TMNT (Vol. 4) #5. That gap’s only a few months long and we’ve already got well over a dozen issues crammed into that timeframe. Damn, but the Turtles were busy, weren’t they? Leatherhead’s IQ seemed a bit of a surprise, too. When next we see him, he’s a mindless beast battling Gameraph over raw meat in the sewers. Obviously there’s a story missing there which I hope gets written at some point in the future (though considering Leatherhead’s reputation for mood-swings, it probably doesn’t).

Fernando Leon Gonzalez’s artwork is a nice fit with some excellent inking and toning by Ryan Brown and Jamal Walton. Although, while his Turtles look fine when they have their masks on, when they take them off, their eyes are constantly drawn as “full circles” which was a stylistic choice I wasn’t too fond of. But whatever, that’s just a nitpick. He did an outstanding job and the Bunny-monster on Page 21 looked pretty kickass.

Overall, it wasn’t really an outstanding issue; just average. Some nice art and a few continuity throwbacks, but damn if that TMNT (Vol.4) #5 time-gap is getting cramped!


Grade: C (as in, “Can’t get enough Super Golden Crisp! That doesn’t really have anything to do with the issue, I just felt like typing it”.)