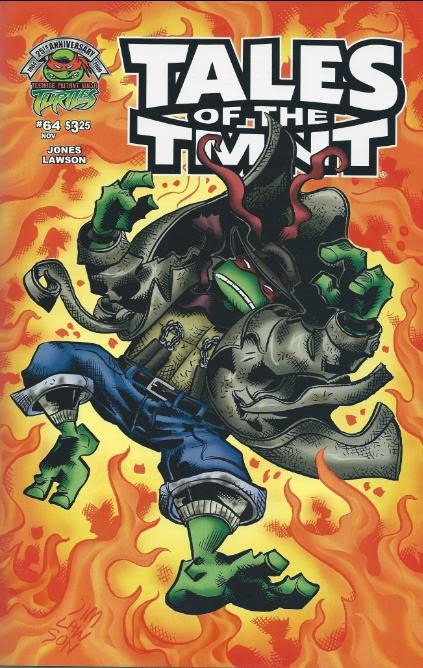 Frontispiece: While battling a demonic dragon, Raph puts the term “ugly” into perspective for the readers.

Down in the sewer lair, Michelangelo is receiving another verbal spanking from Leonardo over something he did a week ago. Luckily for Mikey, he has mastered the art of tuning his overbearing brother out. As it happens, the top floor of a building in Chinatown got blown out and a weird cursed “burning man” appeared and fought Mikey out in the open in front of cameras. Raph’s off the hook since he got doused with a hallucinogen, Don’s out because he has a technical excuse to weasel himself out of blame for every occasion, so that leaves Mikey. Mikey, however, thinks Leo should be blaming himself. 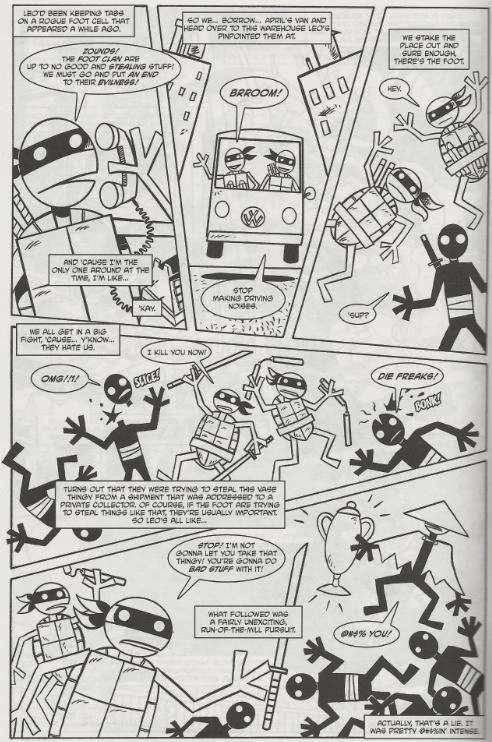 Story as he tells it: the rogue Foot cell that Leo’s been tracking apparently targeted a rare vase. Leo and Mike gave chase in some sort of awesome action sequence that, meh, let’s just skim over. As Lin attempted to spirit the vase away in a Foot chopper, Leo struck her in the arm with a shuriken, causing her to drop and shatter the vase, releasing the “burning man” within.

Some research was in order, but Leo’s patrolling, Don’s net-surfing and Mike’s Lucky Charms-munching yielded nothing. But the Ninja Turtles being the Ninja Turtles, they found other stuff to do to pass the time. While Leo was busy fighting Lin and her Foot cell, Don was busy getting pummeled by Hun and Raph was busy wetting the bed thanks to the drug he got hit with by the voodoo Rastafarian dude, Mike was the only one available to fight the “burning man” when he resurfaced in Chinatown. So Mikey donned a disguise (a hoody and Groucho glasses) and sprang into action. The “burning man” was after some philanthropist named Li Xiao Yao for some reason, so Mike scared the villain off with a fire hose. 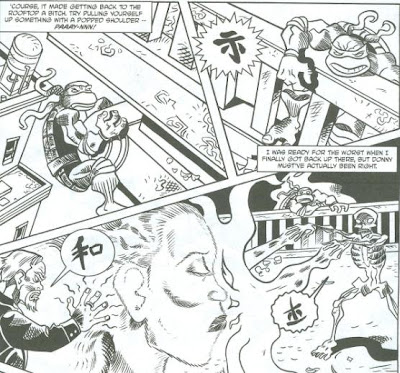 Back in the sewers, Mike reconvened with Don and told him what he saw. Turns out, the “burning man” was a spirit trapped in an urn by an ancient Chinese symbol that Don still couldn’t decipher, so he sent Mike back up top to shadow Li Xiao Yao. Once the top floor of his building exploded, Mike ran to investigate and found the “burning man” attacking Yao. Don then chimed in over their comm, saying that Leo has reported back from his battle with the Foot cell. He found the commanding spell to get rid of the “burning man”, but he’d have to speak to Yao first. So as Yao had words with Don, Mike got knocked off the building. By the time Mike pulled himself up, he found Yao and the “burning man” trading energy blasts. After striking the “burning man” in the head with his nunchuku, Yao was able to disintegrate the distracted spirit.

So with the story told, Mike assures us that everything was completely Leo’s fault because he broke the urn in the first place. The only thing Mike CAN take responsibility for is the parking ticket on April’s van. 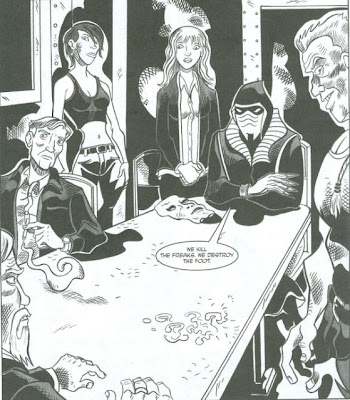 Elsewhere, Yao steps out of his limo. He's worried that the Turtles and the Foot might be aware of the Ring of Xiaolong, which is what he used to destroy the “burning man”, so he brands them all enemies. He decides that the Turtles are the greater threat since they killed Oroku Saki and since “the enemy of my enemy is my friend,” he figures he ought to ally himself with the Foot cell. So Yao finds himself sitting at a conference table with King Cobra, Lin, Hun, a blonde chick and a middle-aged dude deciding how to bring New York to its knees.

*Lin first appeared in Tales of the TMNT #36.

*Hun first appeared in Tales of the TMNT #56.

*Author Tristan Jones revealed the identities of the as-yet-unnamed people at the villain conference on the last page as: King Cobra's personal aide, lawyer and City Hall insider (blonde woman) and a Mafia boss (middle-aged guy). Additionally, the Rastafarian voodoo guy was a drug dealing albino Hatian known as The Baron who was mentioned briefly in Tales of the TMNT (Vol. 2) #56.

*Due to the cancellation of Tales of the TMNT (Vol. 2) and Viacom’s subsequent buy-out of the Ninja Turtles franchise, there are currently no plans to continue or conclude Tristan Jones’s “Gang Wars” story arc. Bummer.

Well, the best on-going storyline Tales of the TMNT (Vol. 2) has offered in recent years has come to an abrupt, unresolved non-conclusion thanks to the cancellation of the title and the Viacom buy-out. A tragedy, in all honesty, since I dare say that this was my favorite installment in the entire story arc so far.

Mike has always been my least favorite of the Turtles in pretty much all their incarnations. But true to the concept of “no bad characters, only bad writers”, Tristan Jones has managed to craft one of the best Mikey-centric stories I’ve ever read. Far too often, writers tend to relegate Mike to the dreaded “comedy relief” position where, depending on how bad the writer is, he often slides into obnoxious mascot territory alongside the likes of Slimer, Orko and Snarf. I understand that comedy relief characters can be very hard to write. They have to be funny and provide levity, but not be overbearing. And somewhere along the lines, it was decided that comedy relief entities had to be utterly useless, too (because watching them screw everything up all the time is hilarious!).

Mikey is constantly walking that razor’s edge, depending on who is penning him. Jones, mercifully, found a way to implement Mikey in a comical manner without making him annoying, overbearing or intellectually offensive. What we have here is quite possibly the most hilarious “inside look” at the Turtles’ relationship the book has ever given us, at least from Mikey’s point of view, giving us his perspective on the other characters, but also giving us a well-rounded look at his very own positive and negative qualities. I feel like I’m overanalyzing with that last sentence, but it’s true.

Mikey can’t take shit seriously. We know that. That’s a fundamental of his character. So here we see him brushing off Leo’s scolding, rolling his eyes at Don’s nerd babble and reveling in Raph’s defeat. Mike’s carefree attitude is often what leads to him being intolerable, but Jones utilizes it perfectly, with a good dash of perspective behind it. Yeah, he doesn’t take things seriously, but he also has a good excuse as to why something or other isn’t his fault and feeds it to us with a healthy dose of comedy.

This issue just illustrates a tremendous understanding of each Turtle on a fundamental level by Jones that’s nothing short of impressive. Just the page where Mike describes how each other Turtle always has an excuse to get themselves out of trouble (Leo’s ego is too big, Don can always come up with a mathematical equation to get himself off the hook and Raph is so hotheaded it’d be like blaming a retarded kid for starting a fire), thus leaving Mikey to hold the bag all the time because he’s the “carefree one that never takes things seriously”. You sort of get a feeling that there’s a kind of burden that comes with being the comedy relief character.

Of course, the best part of the issue has to be Mike’s warped cartoon interpretations of his brothers and the events. Don looking like a Coke bottle-wearing poindexter, Leo as a lame Batman-wannabe and the Stick Figure Theater presentation of Leo and Mike’s battle with the Foot cell are just a few of the highlights. All punctuated with Mikey’s goofy commentary and some funny “you know he’s making this up” word bubbles. Even ignoring all that introspective crap about the Turtles’ personalities I was just yammering on about like a nut, this issue is just plain funny. And that’s reason enough to pick it up.

But there’s a downside to this wonderful story. It’s the last one from this arc we’re going to be getting. It’s fun, it’s hilarious, but it only slightly advances the “Gang Wars” plot and ends with a pretty slick cliffhanger. A cliffhanger we may never see resolved, too. Of course, there’s a slim chance that Viacom might license the Turtles out to another publisher like Dark Horse or IDW, but in order to get this story properly resolved they’d have to hire Jones back on AND continue the original Mirage continuity without rebooting. And that’s…a whole lot of variables.

As it stands, much like “Change of Power”, it’s frustrating that we’ll never see such a cool story arc properly resolved, especially after investing five issues in it. On the other hand, it went out perhaps not with a “bang” but with a really, really fun story. So that’s cool, too.

Grade: A (as in, “And for once, and I can’t believe I’m saying this, but I loved Lawson’s work on this issue, batting around the different cartoony art styles and what have you. His style just really worked with this script”.)