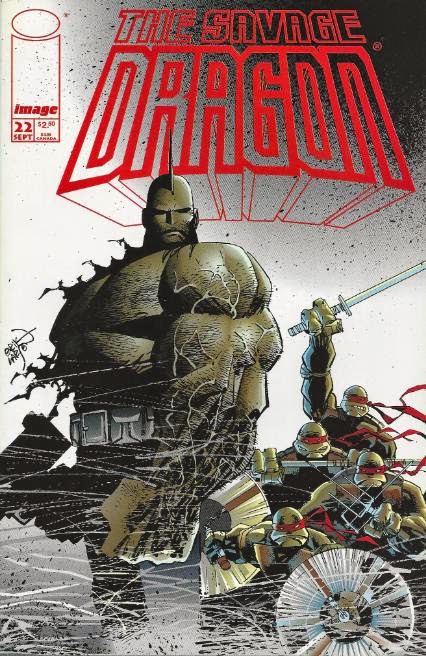 Channel 7 news in Chicago reports that Cyberface, once a high-ranking member of Overlord’s Vicious Circle, has been released from police custody in exchange for information regarding the recently deceased Antonio Seghetti, AKA Overlord-himself. In other news, an APB has been put out on the monster believed to be behind the destruction of the Whelan-Freas Scientific Research Center and the 5th Street El: Complete Carnage.

Elsewhere in the city, the scantily-clad Rapture is testing out her new waterbed, which she hopes to have ready for when her boyfriend, Dragon moves in. Her roommate, the spiky Sarah “Horridus” Hill attempts to see how the bed feels, but Rapture assures her that ain’t happenin’. 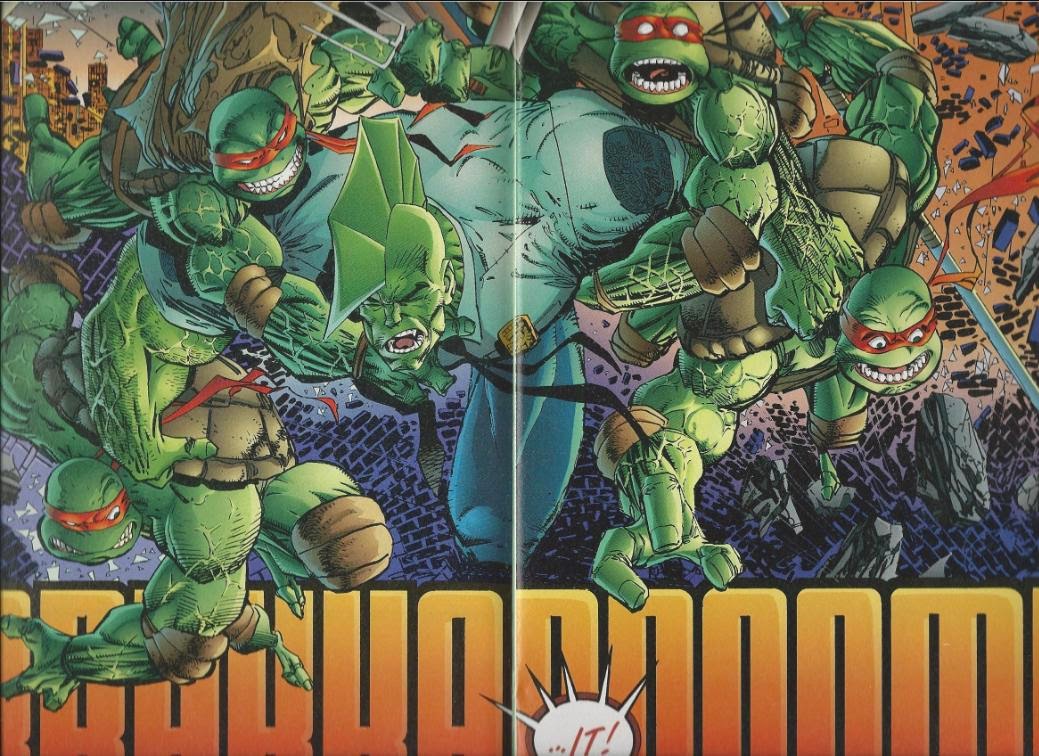 Meanwhile, Dragon and the Turtles flee from a collapsing building. They escape being squashed, but Don theorizes that since the Carnage clone is powered by man-made materials, having a building dropped on him has made him more powerful than ever. He’s right, of course, and Carnage emerges in a frenzy. The Turtles attack him, but the street gives way and they all go tumbling into the sewers below. Dragon reluctantly follows. 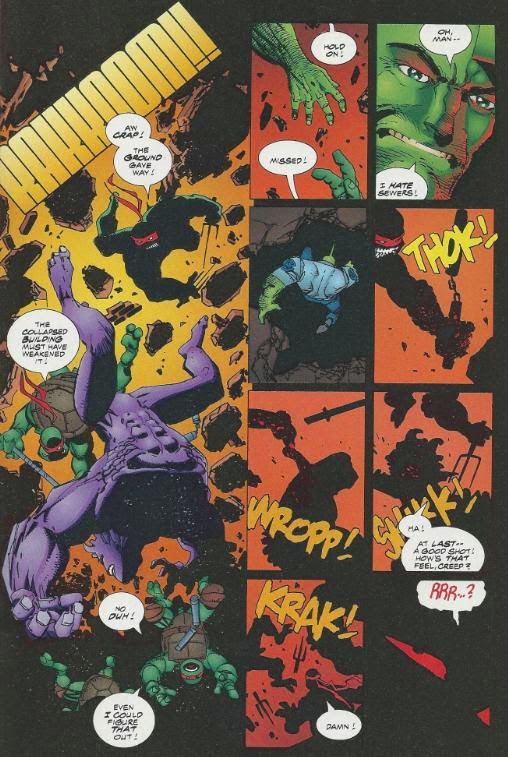 Back on TV, the news about Overlord’s funeral is all anyone’s talking about. If you’ve been keeping up with Savage Dragon comics (at least back in ’95) you probably already know this, but Dragon killed Overlord by shooting him in the face and blowing him out of the top floor of a skyscraper. Watching the broadcasts, Sarah looks backward and begins getting “ideas”.

Back in the sewers, Dragon joins the fray and begins punching the Carnage clone into pebbles. 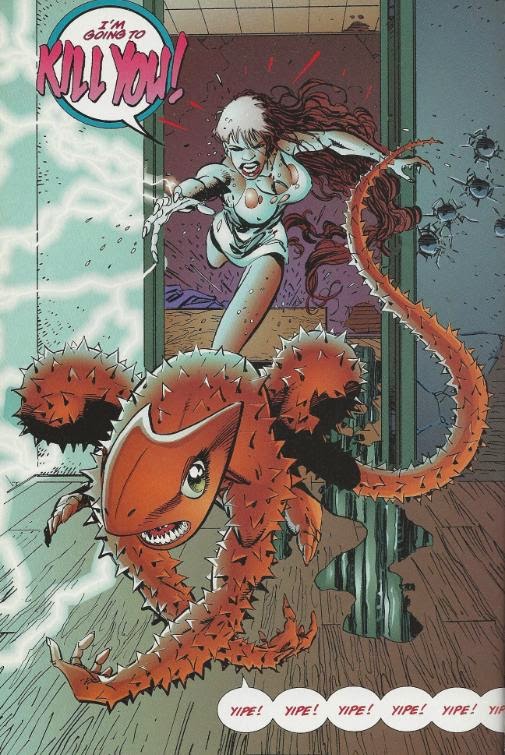 And back in Rapture’s place, as she sleeps, Sarah sneaks into her room and lays a hand on her waterbed. The obvious happens and a sopping wet Rapture proceeds to chase a yelping Sarah out of her bedroom.

Down in the sewers, Carnage sends Dragon flying out of a pipe and into Lake Michigan. Dragon resurfaces, absolutely furious, picks Carnage up with one arm and hurls him way out into the middle of the lake. The water weakens Carnage, but he’s still conscious as he sinks. That is until some mysterious hands take him from behind and keep him from surfacing. Realizing he can’t just outright kill Carnage, Dragon leaps into the water and drags him back to the pipe. Unfortunately for the Carnage clone, Dragon was too late, and he’s dead. The Turtles find his drowning pathetic and could care less.

During the ride back, the Turtles try to console the gloomy Dragon by assuring him that it wasn’t the real Carnage, but a clone brought to life by the eggheads at the Whelan-Freas Scientific Research Center. Dragon isn’t getting over it, as he hates killing. The Turtles then whine that they don’t want to go to Dragon’s girlfriend’s place, but Dragon has a date to keep and won’t be late. They sing a different tune when they get there and the shapely, soaking wet Rapture opens the door. Sarah tries to introduce herself to “all the cute boys”, but all eyes are on Rapture. Dragon asks the Turtles to give him some time alone with Rapture, but the Turtles take the hint and bid him farewell as they head back to New York.

Rapture is visibly upset, as she tried so hard to get her place ready for Dragon only to have everything go wrong. She asks Dragon to spend one more night at Frank’s place before he moves in and shuts the door. Dragon walks away, dejected. Suddenly, he’s attacked by a giant flying naked fat woman (named "Fiend", it seems). She accuses Dragon of molesting her daughter and swears vengeance, though she doesn’t want to kill him until she’s certain he’ll be going to Hell. With Dragon pounded unconscious, the fatso picks him up and flies over to a smokestack. She decides to test Dragon’s healing factor and drops him down the chimney.

*This story is continued from TMNT/The Savage Dragon #1.

*Though the Turtles will cameo in The Savage Dragon/Destroyer Duck #1, they won't actually meet Dragon (and Sara) again until TMNT (Vol. 3) #10.


*Leonardo will encounter the real Complete Carnage again in Tales of the TMNT (Vol. 2) #41.

*"The Savage Dragon Vol. 6: Gang War" trade paperback collection adds an extra page to this issue, showing Fiend as the one choking the Complete Carnage clone while underwater.

The second TMNT/Savage Dragon crossover wraps up and you know what? It wasn’t half bad. Yeah, it was mostly just a gratuitous fight scene, but the use of one of the TMNT’s older villains went a long way and the whole thing just seemed to have much more of a point to it than their last crossover.

Firstly, I’d just like to get off my chest that I loved the little gag involving the word “shit”. TMNT/The Savage Dragon #1 ended with Dragon and the Turtles screaming “Oh sh-“, while this issue began with them finishing the word with an “-it!” Yeah, yeah, I know. Not very funny when someone explains it to you, but amusing when you read it yourself.

Larsen seems to have a better grip on drawing the Turtles this time around. Their heads aren’t quite so funny looking and they’re much more expressive. So far as the Turtle-related plot is concerned, it’s mostly just a big fight scene, but it’s done well. The action’s handled very well, particularly the sewer scenes, where everyone is drawn in silhouette. And as much as I like two-page spreads, Larsen doesn’t overdo them like he did last time, so we’re given a little more substance and length to the brawl.

Probably the best part of the story, though, was when the Turtles got to interact with Rapture and Sarah at the end. Their slack-jawed reaction was priceless and their juvenile remarks (“Nice rack!”) were just the cherry on top. Shame it only lasted a page, but it might’ve gotten annoying if it went on any further, so it’s no big deal.

Anyhow, do I recommend this crossover to anyone? Well, if you love Complete Carnage and Radical, then yeah, this is for you. It also initiates at least one plot thread that develops during the Image series, so it isn’t worthless. But outside of that, it’s just a fun two-issue brawl with a classic TMNT villain and there’s nothing wrong with that, I suppose.

Grade: C+ (as in, “Could I have done the research to find out that fat woman’s name? Yeah, probably. But I really couldn’t be bothered”.) (edit: someone did the research for me)