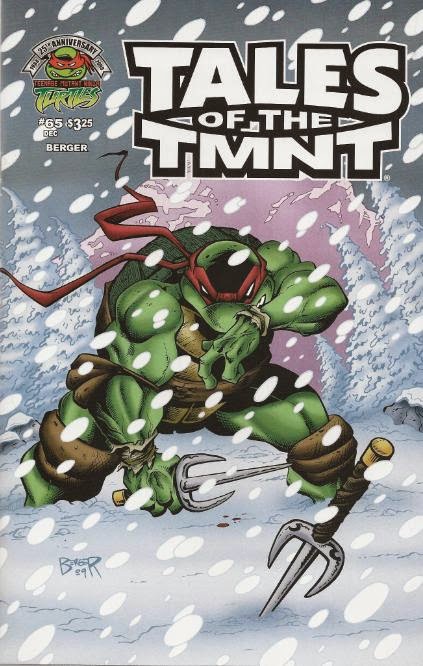 Frontispiece: On a snowy day in New York, Leonardo dangles from the side of a broadcasting tower with a young Shadow in his arms, praising how the holidays bring families closer together.

On a mountain in Northampton, a Foot Mystic is conjuring a spell, reciting the name “Oroku” repeatedly. Meanwhile, down on the farm, the Turtles and the Jones family are celebrating Christmas and about to light up the tree. Back up on the mountain, the Mystic places two Japanese coins in a snowball and sends it rolling downhill.

At the farm, Splinter bids his family a Merry Christmas and shuffles off to bed. Meditating before sleep, he is suddenly addressed by the spirit of the Rat King, who silently directs his attention first toward the sudden blizzard outside and then toward the spectral vision of a Japanese coin. As the Rat King vanishes, Splinter ponders his intentions. 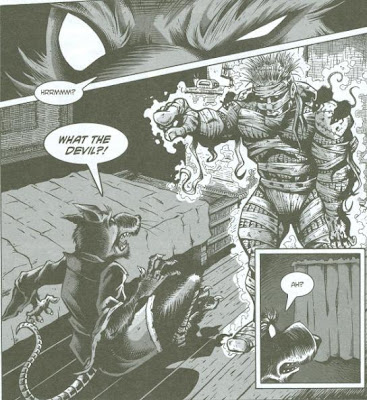 Up on the mountain, the Foot Mystic is having a flashback. Apparently named Mamoru, he has a loving wife and a young daughter back in Japan (his "two little flower petals", as he calls them). He’d been stealing money from the Foot Clan in the hopes that he could amass enough to send his daughter, Aimi, away from the Foot’s reach and to a new life of safety and freedom. His wife, Miyuki, protests, but Mamoru insists it is the only way to keep their daughter safe. Mamoru is eventually caught, however, and his house is banished from the Foot Clan by the Elder Oroku. Mamoru begs Oroku to spare his family, but Oroku refuses, ensuring him his family will live a life of misery.

At the farm, the Turtles and the Joneses are enjoying the festivities until Splinter comes back downstairs and warns them of the ill omens he received. Meanwhile, the snowball reaches the foot of the mountain, having now grown to titanic size. It then morphs into a rotund, horned demon with coins for eyes and begins marching toward the farm. Inside the house, the Turtles and Casey have prepared for battle, though not soon enough to save Casey’s car from being totaled by the monster. 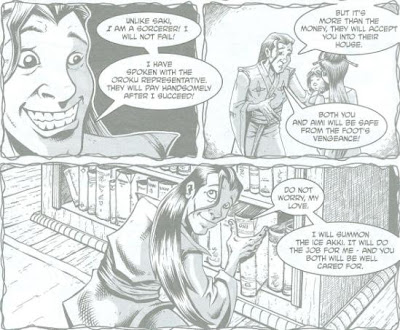 Elsewhere, Mamoru begins his mystic assault, though his flashback continues. Following his banishment, Mamoru reminds his wife that the Oroku family still wish the “kappa” dead, regardless of the Foot Clan’s truce with them. Mamoru vows to use his mystic training to slay the kappa and please the Oroku family. Then, when he succeeds, his family will be spared.

Back on the farm, the Turtles and Casey are being trounced by the Ice Oni. Leo succeeds in slicing the monster in half down the middle, but that just results in two Ice Oni for them to deal with. Splinter finally deduces that the only way to defeat the Oni is to remove the coins from their eye sockets. Leo and Raph pluck the coins out and fling them to Splinter, who hurls them into the fireplace. As soon as he does, a flaming creature pops out of the chimney and heads toward the mountain. The Turtles, Splinter and Casey decide to follow it. 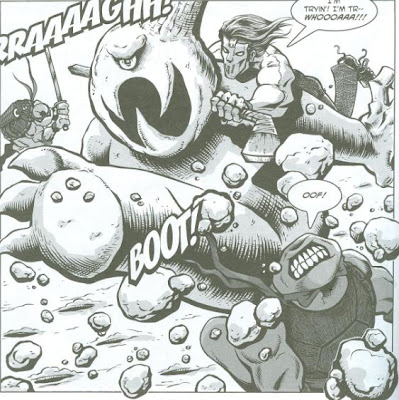 They eventually happen upon Mamoru’s camp, but only find an old book and a pile of ashes in the shape of a man. Don leafs through the book and discovers that the spell he cast required a human sacrifice. Seeing that it’s a Japanese book, Raph suspects the Foot were behind the Ice Oni, though Don doubts Karai would break their truce. Regardless, they’re all left wondering why anyone would cast a suicide spell. Splinter finds a photograph of Mamoru and his family (with Mamoru burned out of the image) and puts the pieces together.

Back at the farm, Casey and April have an uncomfortable talk about their financial situation. April insists everything will be okay, but Casey brushes it off, reminding her that they’re always being attacked by something. April counters by saying that, at the very least, they won the fight. Dropping Mamoru’s family photo into the fireplace, a sorrowful Splinter ponders what will become of those left behind by the loser. 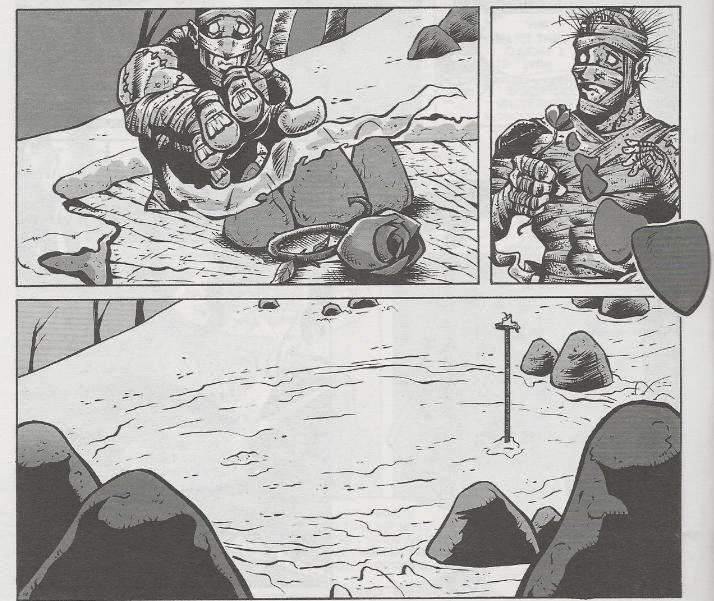 Back at Mamoru’s camp on the mountain, the spirit of the Rat King finds a rose the Mystic left behind. As he picks it up, the petals flutter away and the flower withers and dies.

*Due to Shadow’s age, this issue must take place early in the Mirage “Vol. 3” Era. Personally, I like to place it just after Tales of the TMNT (Vol. 2) #53, in that same December.

*Aside from Oroku Nagi’s posthumous appearance in Tales (Vol. 2) #19, this is the first time any other member of the Oroku family has been seen since TMNT (Vol. 1) #1.

*Underhanded maneuvering within the Japanese Foot's hiearchy from the remaining Orokus within the organization was referenced in TMNT (Vol. 3) #24.

*The truce with Karai and her sect of the Foot Clan was made back in TMNT (Vol. 1) #61, though multiple splinter groups of the Foot have continued to plague the Turtles since then.

*This issue also included a bonus pin-up, “Better be Good!” by Shawn McManus.

Not exactly the bestest Christmas ever, is it? Sheesh.

But stories like this just go to show you that Berger really is one of the better storytellers to be involved with the Turtles franchise, and if this is to be his last Turtles story due to the Viacom buy-out, then I suppose it’s a bitter-sweet gift to see him go out on such a strong note.

“Cold, Cold, Ice” is a very touching tale that spits in the face of standard Christmas Special tradition by being woefully depressing, but in a meaningful and emotional sort of way. It explores the side of the TMNT/Foot rivalry we very rarely see, showing us that at least not all of the members of the Foot Clan are ruthless monsters. Mamoru’s circumstance is very tragic and the withered flower at the tale’s end signifies just as awful a fate for his wife and daughter. It’s definitely one of the more emotional Turtles stories ever written, with the backdrop of Mamoru’s dilemma adding some genuine impact to what would otherwise have been another run of the mill “Turtles fight monster” story. The reader is left feeling conflicted during the fight as you don’t want either side to win or lose, because this is anything but a black and white situation. Truly the hallmark of an excellently-crafted story and a winner for Berger.

But among the other things going on in the story, we get an incredibly rare glimpse of not only the Japanese branch of the Foot (sans Karai), but of the other members of the Oroku family, too. Bet you forgot about them, didn’t you? But yes, if you go back and check out the scenes involving Oroku Nagi’s funeral in TMNT (Vol. 1) #1, you’ll see that the Oroku family was quite plentiful. Their bloodline didn’t end with Saki, at any rate. The Elder Oroku wearing a hat styled after Shredder’s helmet was a little silly (he kinda reminded me of Mordru from Legion of Superheroes and not in a good way), but his presence was still a joy.

And speaking of joyful presences, how cool was Berger’s rendition of the Rat King? I’d never seen Berger draw him before, but he really did a bang up job on him. He’s all nasty and spooky just as he should be, but even then, you can see some genuine sadness in his eyes as he grips the dying rose on the last page. Berger’s style may be more whimsical than some folks like, but he’s really got a way with expressions.

Overall, this was the kind of story where Tales of the TMNT is at its best. It builds upon plot threads and past continuity while remaining an accessible one-off tale, but works in some challenging emotional back story to supplement the action and give the tale the weight it needs. There have been a whole lot of Christmas-related Ninja Turtle stories, and outside of the Leonardo (microseries) #1 and TMNT (Vol. 1) #10 two-parter, this is certainly the best.

Grade: A (as in, “Although, when I first saw that pin-up in the back, I thought the Turtles were laughing their assess off at Santa who had just hung himself from the rafters. Took me a minute to realize he was just sliding down the chimney. Yeah, that makes a lot more sense…”)