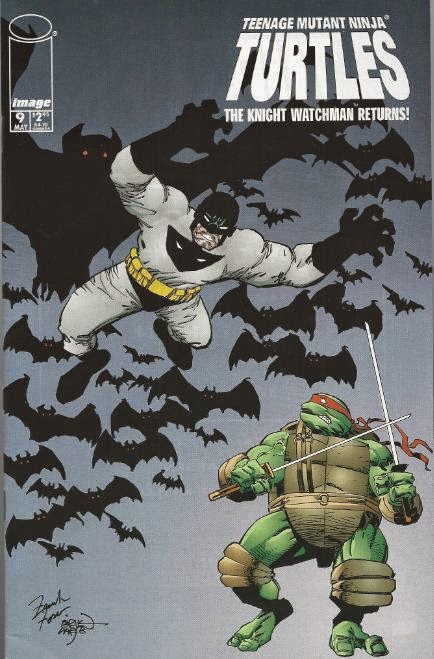 Piloting the Triceraton aircar, Leo enters the limits of Midway City, home of Galahad. Reading a brochure describing Midway City as a crime-riddled cesspool, Leo recalls when he was a kid and met Galahad. As Leo begins to wonder if Midway City’s vampire bat plague has anything to do with Splinter (who was mutated into a vampire bat), Leo is suddenly attacked by a giant man-bat, who wants to give him a “gift” from the “master”. Leo isn’t about to let it bite him, though, and sends the bat spiraling down into an alley. 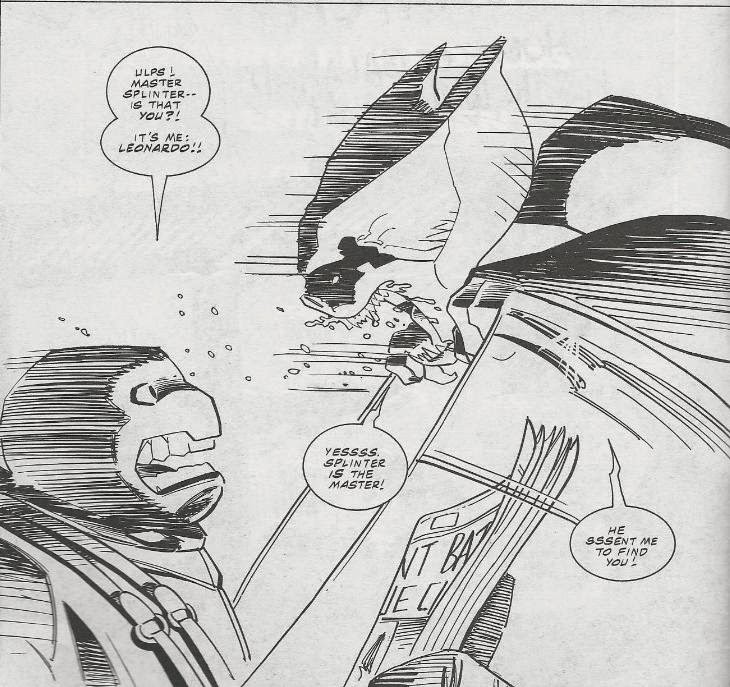 Parking the aircar, Leo rushes into the alley and tussles with the vampire. Leo is about to stake him through the heart when he’s stopped by the Knight Watchman (Galahad's old crime fighting partner). The Watchman explains that the mutagen in Splinter is being transmitted in conjunction with the rabies virus and that the cure for rabies reverts the mutation. The Watchman injects the vampire and then reveals that he’s not the original Knight Watchman, but Galahad taking on the mantle. After a reintroduction, Leo explains how Splinter got pumped with the mutagen, then wonders how it turned him into a bat. Since mutagen causes the recipient to take on the traits of the last animal they came in contact with, technically, Splinter should have become more human. As they ponder this, Leo discovers that the aircar has been stripped by hooligans. The Watchman caught the punks and recovered all the parts, luckily. 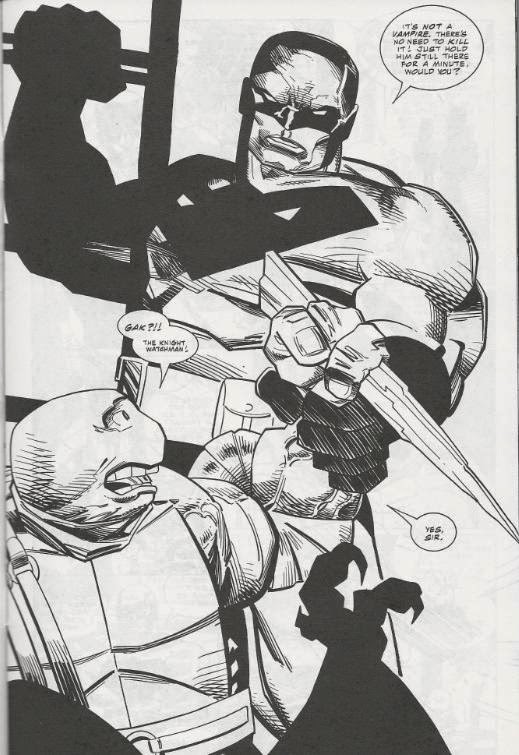 Back at the Watchman’s mansion, Jerry Randall (his secret identity) explains that he plays a dual role as the Knight Watchman and Galahad; a sort of good cop/bad cop deal. With the back stories finished, Leo decides to try and contact Splinter via the Astral Plane and begins meditating.

As the Watchman watches over him, a giant vampire and several regular bats burst in through the window. As the vampire attempts to bite Leo, the Watchman blinds him with a flash grenade and then injects him with the rabies antidote. As he struggles with this, the vampire they caught in the alley awakens and escapes through the window. The Watchman calls out to him, afraid that the rabies antidote could kick in any second. As he says this, the vampire reverts back to a normal person and plummets. Back from his trance, Leo snags the poor sap with his kaginawa (ninja rope with grappling hook). Leo explains that he talked with Splinter, but his master was nuts with rabies. Suddenly, the other vampire Watchman had caught breaks free and flies off, though Watchman assures Leo that he bugged the bat with a tracer.

Cruising the city in the Batmo- …“Knight Watchman-mobile”, the tracer leads them to an abandoned nightclub called The Mine Shaft. They enter and find two dozen more vampires hanging from the rafters. A fight breaks out and the Watchman throws down some gas bombs containing a more powerful vampire antitoxin. It works and the vampires immediately revert back to normal. Leo heads after the insane Splinter, who tries to escape through a window. Leo jumps onto his back and sticks him with a syringe full of antitoxin. It appears to have no effect and Splinter simply dumps the Turtle and flies off. 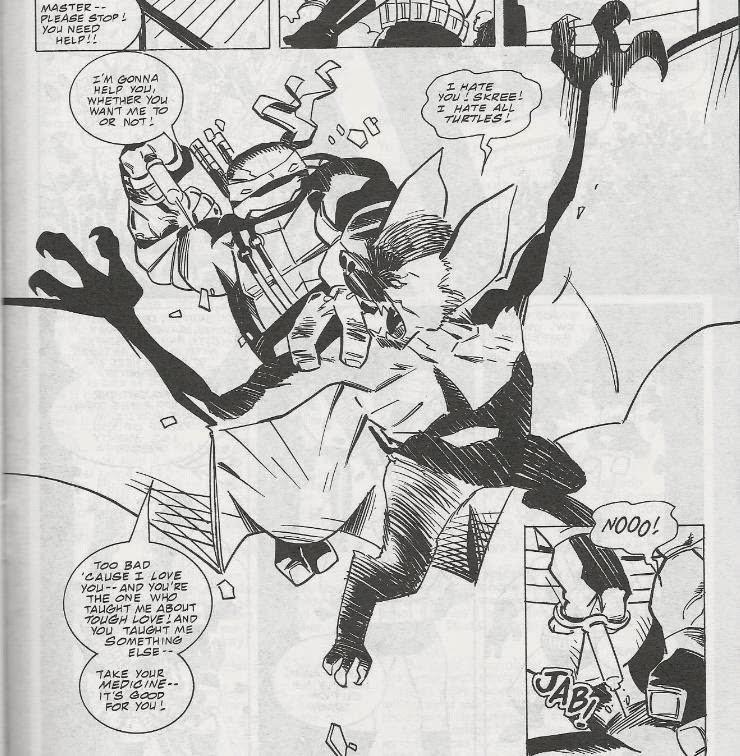 As Leo lands in a tree, dejected that the antidote didn’t appear to cure his master, the Watchman assures him that he did a fine night’s work and saved a lot of innocent people. Leo summarily falls out of the tree and lands on his head.

*Leo describes mutagen working in a way similar to how it was presented in the Fred Wolf cartoon; it causes you to take on the traits of the last animal you were in contact with. Mutagen was never shown to work that way in the Mirage comics; it simply makes animals more anthropomorphic and intelligent. Oops.

So, the Knight Watchman and Galahad. I have to confess that the only thing I know about them is that they crossed over with the Turtles twice and those are the only stories featuring the characters (or character in a dual role) that I’ve read. The Knight Watchman doesn’t strike me as being terribly original, being a pretty in-your-face Batman homage, but I’ll reserve the venomous snark since I haven’t really read that many stories with the character.

While it was a bit blunt, the Batman parody worked with the whole overarching “vampire” theme of the story and was, I dunno, kind of amusing. Primarily just an action issue (all the mushy stuff having been taken care of in the previous arc), the real burden of entertainment falls on Frank Fosco’s art. He draws some pretty bitchin’ vampires and the action is staged quite nicely. Fosco’s style has always had a dark edge of horror to it, so a grim and gritty vampire tale suits him perfectly. My only complaint is on page 5, where Leo is startled by a cat and encounters the vampire at the same time while his speech bubble narrates everything as it happens. I get the feeling this would have worked better as two panels, as Leo is spouting out a very long, clunky monologue while getting attacked by what can only be the world’s slowest vampire.

While the issue kind of amounts to little more than a gratuitous crossover with Gary Carlson’s other “totally original” character, the Knight Watchman, I can forgive him for reasons already explained. What I can’t really forgive is the explanation that mutagen works in a way described only in the Fred Wolf cartoon. It just bugged me. I won’t come down on Carlson too hard for the mix-up; I mean, hey, it happens. In TMNT (Vol. 1) #45, even Dan Berger once got Mirage continuity mixed up with the continuity of the live action film series. Still kinda irked me for a second, though.

Anyway, with the Turtles meeting the Savage Dragon (again) in the next issue, we hit sort of a “crossover arc”, albeit a pretty brief one. If gratuitous crossovers get on your nerves, then these issues might annoy you. Personally, I thought it was pretty harmless and a nice callback to Big Bang Comics #10 (even if it was technically published simultaneously with this issue).

Grade: C+ (as in, “Carlson is probably still dealing with DC’s lawyers to this very day”.)