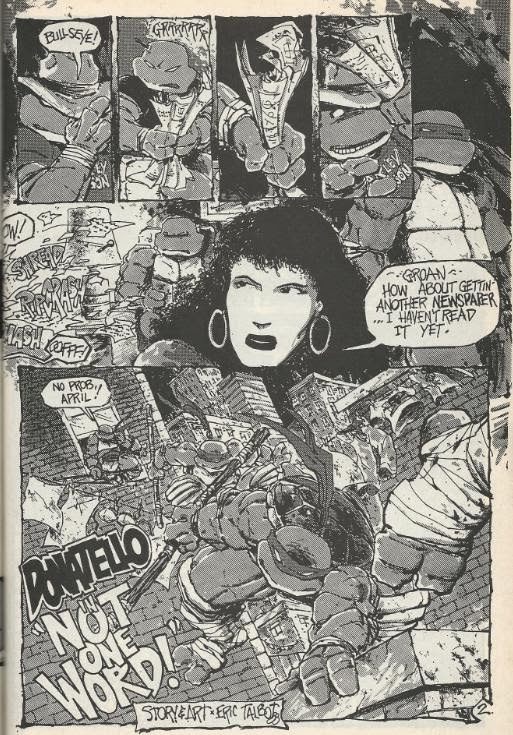 In April’s apartment, Don ninjas-up so he can go out and get some air, asking if anybody needs anything while he’s out. Raph shoots Mike with a rubber dart, causing Mike to shred to the newspaper he was reading and tackle him. April groans and asks Don if he can grab another newspaper. 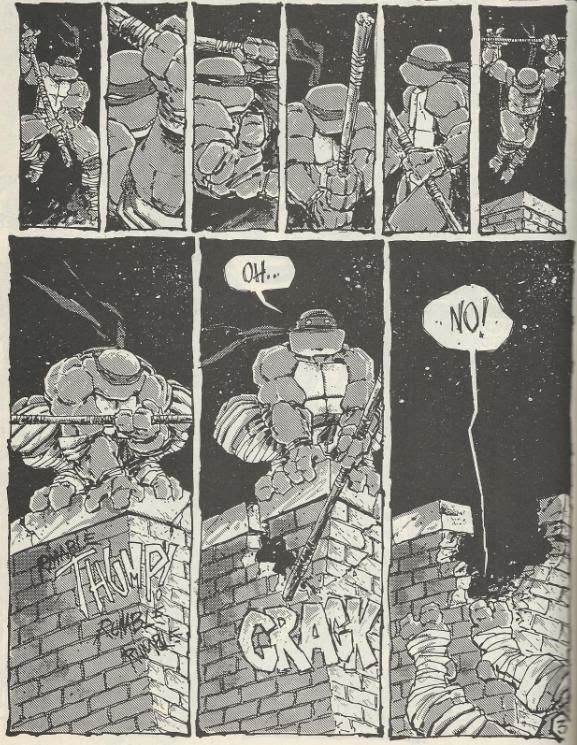 Don leaps out the window and across the rooftops, a perfect image of ninja stealth… until a ledge crumbles beneath his weight, sending him plummeting into a dumpster. As Don recovers from his blunder, a dump truck snags the dumpster and empties its contents into its bed, Donatello included!

Don lumbers up from the trash and grabs a fire escape as the truck passes by it. Don climbs to the rooftop and begins brushing off all the refuse, including a banana peel. As Don stumbles away, he fails to notice said banana peel on the ground and comically slips on it. This sends him tumbling through a skylight and into an open vat of Pink No. 3 of the Acme Super Long Lasting Dye Co. variety. 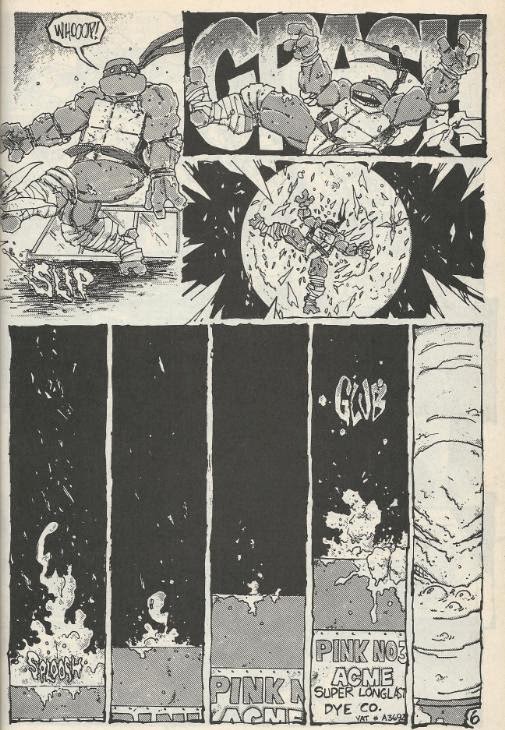 Don emerges from the vat, seething. Once he reaches the street, the lamplight illuminates his new dye job (much to his horror). Proving that some deity is out to get him, a passing news van the hurls a stack of papers toward the street corner, missing it and beaning Don right in the back of the head.

Later, back at April’s, Raph has a furious Mikey bound and gagged (April and Leo pleading for him to let Mikey go). Don bursts through the front door, dropping the bundle of papers on the ground. The Turtles and April are astonished, but before they can remark, Don has one piece of advice for them, “Not. One. WORD.” 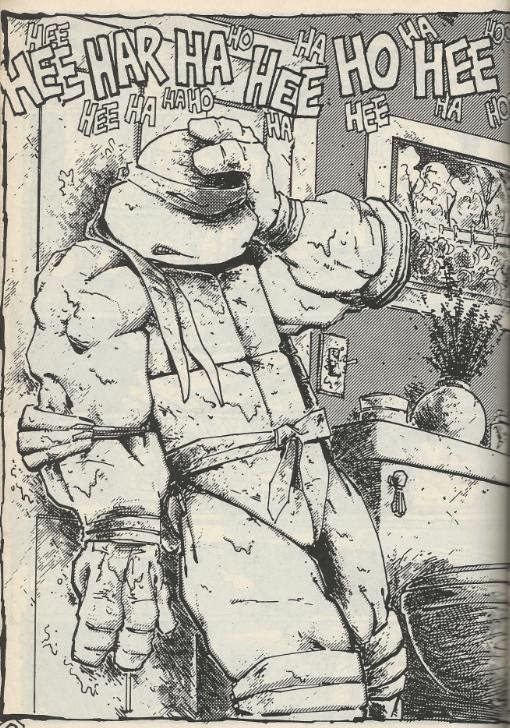 They laugh anyway as Don prepares a shower.

Another comedy relief short that would normally fall into the rather forgettable category with the rest of the humorous back-up strips if it weren’t for one very important thing: Eric Talbot.

Both Eric Talbot and A. C. Farley have always been two of my favorite artists in the Mirage stable primarily because their styles have a serious edge of horror and nastiness to them. Talbot’s style is especially sinister-looking and one I’d love to have seen more of. Talbot rarely put pencil to page for full Turtle issues, mostly operating as an inker or letterer or what have you (jobs which he is also quite skilled at), but his menacing style is one I’ve always been attracted to.

Sort of a surprise that this is, again, a comedy relief story, right? Even when Don is engaged in nothing but page after page of slapstick antics, Talbot’s almost “evil” rendition of the character just seems to fit. He choreographs the action especially well, making a downright silly story seem far more epic and dynamic than it really ought to be (I point to the first page of Don dramatically “suiting up” or the huge two-page spread at the finish showing him groaning in the bathroom, surrounded by laughter).

Talbot’s hard-edged style actually works great with the comedy theme of the story, as Don’s first slapstick pratfall sort of takes you by surprising, following all the macho action poses he was pulling off just before. The touch of menace to the characters that Talbot applies also comes in handy when depicting Don’s reaction to his string of misfortunes: dude is PISSED.

Additionally, Talbot employs a lot of details unique to his rendition of the Turtles I’ve always enjoyed. In regards to the duo tones, the Turtles have a white bottom lip that contrasts with their grey heads; a small detail of his that I’ve always liked which few other inkers and toners ever employed. But I think one of Talbot’s best “trademarks” in regards to the Turtles is how he tends to draw them wearing clothes when they’re lounging about; a detail I’ve always liked. Not a lot of artists can pull off the Turtles in t-shirts, so naturally, not a lot of artists draw them in t-shirts. But Talbot does it well and it’s nice to see them acclimating to human culture with a full wardrobe every now and then rather than running around in the nude all the time.

So my review of this issue seems to be more of a review of Talbot’s style, now that I look at it, but I think this is the first Talbot Turtles comic I’ve ever reviewed, so you’ll have to forgive me. So far as the story goes, it’s amusing where I don’t think it really would be had any other artist penciled it. Save for the scenes at the apartment, it’s almost entirely pantomime, relying on Talbot’s use of action and expression to get the gag across. And he does a great job. However, since the whole punchline revolves around seeing Don dyed pink, this might be one of those few back-up strips that would have benefited from a color printing.

Grade: B (as in, “But being dyed pink doesn’t excuse you from stealing all those papers, Don!”)