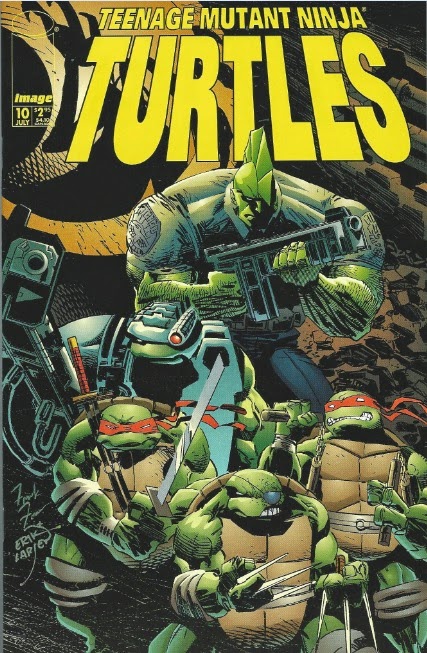 Night time in Midway City, and Don is busy hopping along the rooftops. He remarks that although he is happy that his new cyborg armor has made him bigger, stronger, faster and smarter, he also feels that he doesn’t really need it, since he’s also a ninja. Don finds an obscure water tower, which is really a secret entrance into a large chamber kept by Galahad. Don enters the chamber and finds Leo working. Don surprises him, intent on killing him for butchering his Triceraton aircar. Leo explains that it was stripped by punks, though he was able to get all the parts back. As Don hunkers down to repair it with his cyborg tools, he asks where Mike and Raph are. Leo says that they’ve gone to investigate a rash of “vampire killings” in Chicago. 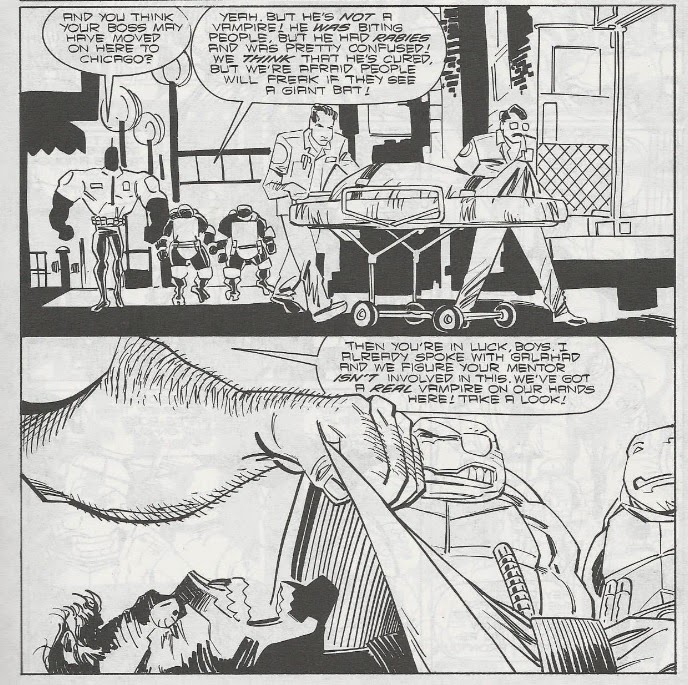 In an alley in Chicago, the media have swarmed around the latest victim of the Vampire Killer. After answering questions, Officer Dragon shoes the media away only to be met by a pair of visitors in trench-coats and fedoras. Dragon sighs and removes Mike’s and Raph’s “disguises”, as there are so many freaks in Chicago, no one will notice two giant turtles. Mike and Raph explain that Splinter was behind the recent “vampirism” plaguing Midway City, but that now that he’s cured of rabies, he should no longer be a problem. They do, however, think he might have something to do with the Vampire Killer and want to track him down. Dragon explains that he’s already been briefed on their ordeal by Galahad and says that the Vampire Killer he’s after likely isn’t Splinter. He shows them the freshest corpse, which has been impaled rather than bitten and has been reduced to a withered husk. Content that it isn’t the work of Splinter, the Turtles and Dragon go their separate ways, as the Turtles decide to loaf around Chicago until Don and Leo can pick them up and Dragon wants to have a talk with the Vicious Circle (Chicago’s big gang).

Raph decides to get some beers at a strip club called “The Freak Outpost” while Mike wanders off to do something private. Inside the club, Raph enjoys some brews and the décor, including the head of a horned freak named the Chicago Bull who had his noggin mounted on the wall for insulting the Vicious Circle while in the bar. The chicken-headed freak, Powerhouse, doesn’t like all the noise Raph is making and promptly picks a fight with him. 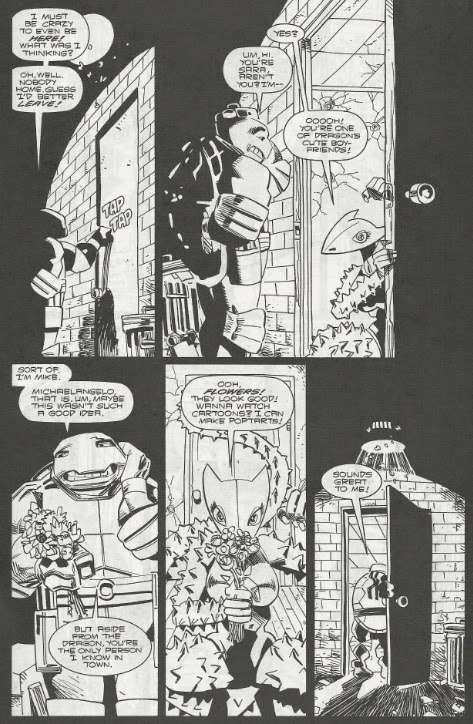 Over at Rapture’s place (she’s Dragon’s girlfriend), Mike is standing outside with a bouquet of flowers and having second thoughts. Suddenly, Sarah (the spiky, reptilian freak) opens the door and recognizes him from the Turtles' last visit. Mike introduces himself and shyly offers the bouquet. Sarah takes it enthusiastically and invites him inside to watch cartoons and eat pop-tarts.

Back in New York, a suited spook knocks on April’s door. He says that Casey has won the lottery and wants to know where to find him (and his young daughter). April says she’ll go look for his address, realizing that the spook is from the mob and is after Shadow. April tells Shadow to hide in Mike’s room then informs the spook that she doesn’t know the address. The spook gives her his card and leaves.

Up above Chicago, Leo wakes up in the newly completed Triceraton aircar. He’s astonished that Don rebuilt it all in one morning. Don explains that the armor did all the work. Leo asks if the armor’s databanks can tell him where it came from, but Don laments that the armor won’t give him access to that info. 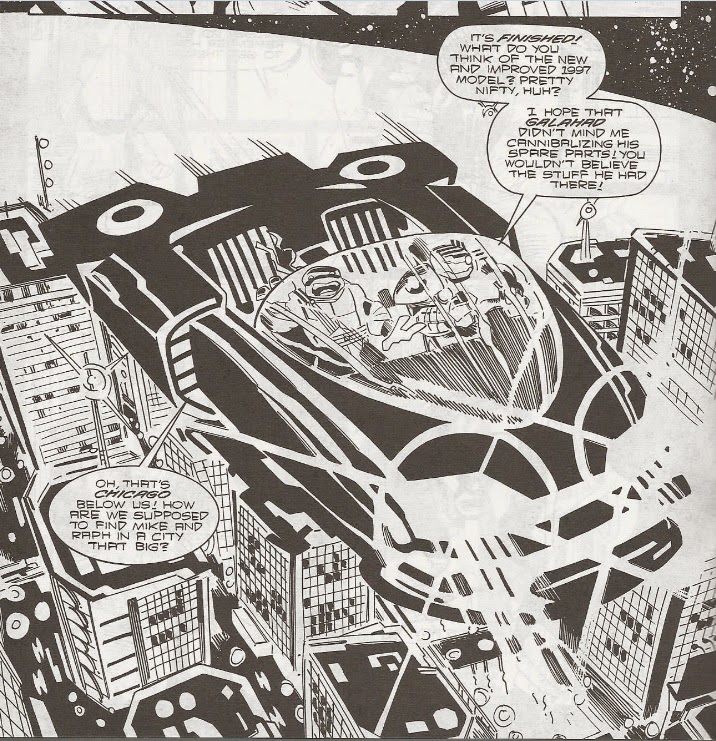 Down on the streets, Dragon is having a chat with a Vicious Circle representative, Cyberface. Cyberface won’t answer any questions, instead opting to have his goons kill Dragon. As the villains encircle him, the Turtles spot the altercation from the air and swoop in. Don sends them packing with one blast from his arm gun. As the villains retreat, one of the reporters from earlier approaches Dragon with a connection between all the vampire killings. She says that all the victims were involved in the conviction of serial killer Johnny Lee Raeburn. Raeburn was subsequently launched into space as part of an experimental NASA program, though his vehicle was lost somewhere beyond Pluto (the FUCK!?). She says that the next likeliest target is Judge Pulaski, the man who sentenced Raeburn. 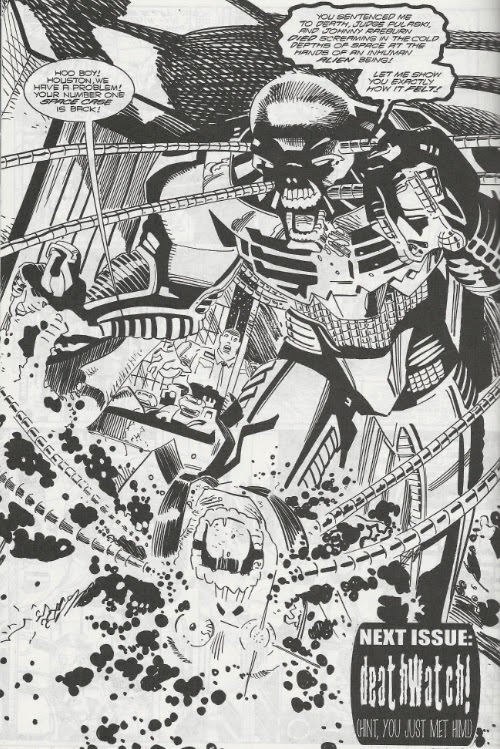 The Turtles and Dragon hop into the aircar and fly to his retirement condo. They’re too late, though, as Raeburn (now a tentacled cyborg calling himself “Deathwatch”) has begun sucking the life out of Pulaski while screaming his origin (he was killed by an alien in the cold depths of space).

Well, the Turtles’ tour of the Image universe continues. While I’m not a humongous fan of the Savage Dragon, I don’t hate the book or anything. I’m just ambivalent toward it, at least when it isn’t crossing over with characters I DO care about, such as the Maxx, Spawn or, yeah, the TMNT. Being their third encounter, the TMNT seem to be pretty comfortable with the guy and hey, we didn’t even need an editor’s note to tell us that they’d met before!

There’s some good and bad going on in this arc, but to get the bad out of the way: Deathwatch. While his origin is pretty “what the…?” and hilarious, he’s still a lame relic of the 90s; the Carnage era where every villain suddenly needed to be a mass-murdering serial killer because it was edgy. Oh, and a cyborg. They all needed to be cyborgs, too. His origin story, as well as the set-up to his plot thread (his return to Earth), were published as back-ups three years before TMNT #10 in a rather overlooked miniseries starring a third-tier character, at that, making his appearance here all the more unexpected and uninvited. Chances are I’m going to harp on him more for my review of issue #11, so I’ll just stop myself right now.

There are also some ridiculous logical errors going on, though I suppose some could just be written off as standard comic book serendipity. The rough population of Chicago is 2,896,016 people. Yet somehow, the Turtles happen to fly over Dragon AND recognize him from a few thousand feet up. Likewise, Raph just happens to go to a strip club full of Savage Dragon villains. What’re the odds?

For me, the real highlight of this issue was Mike hooking up with Sarah. Despite my tirades against shipping TMNT fangirls, Ninjara and Leo/Radical, I actually am not adverse to the Turtle’s finding romance. I just like it to be done well, that’s all. From the handful of issues of Savage Dragon I’ve read, Sarah sort of became a favorite character of mine, primarily because she was so adorable (at least when she wasn’t… doing… that thing… she did). Mike asking her out was a nice throwback to their brief encounter in Savage Dragon #22 and, you know, they seemed like a good match for each other. I enjoyed the development of their relationship and it was just one more of those plotlines I was so irked at for being dropped when the book was cancelled. Not very gratifying at all.

So far as Raph going to a strip club is concerned, I actually thought that was pretty amusing and perfectly in character for a guy like him. I tend to eschew comics that try too hard to make characters badass, but pounding brews in a strip club and picking fights is pretty in-character for a guy like Raph. I was pleased that Mike felt uncomfortable about going into a place like that and dismissed the idea. Nice evidence that Carlson knows the characters and isn’t forcing bad 90s “look at how hardcore I am!” clichés onto all of them.

Overall, the one page of Mike and Sarah getting together is the only thing I remember this issue for and the one thing I really like about it. The villain is terrible and there are too many convenient coincidences to stomach.


Grade: C- (as in, “Come to think of it, though, Sarah is kind of… mentally-stunted. …She really is a perfect match for Mikey!”)