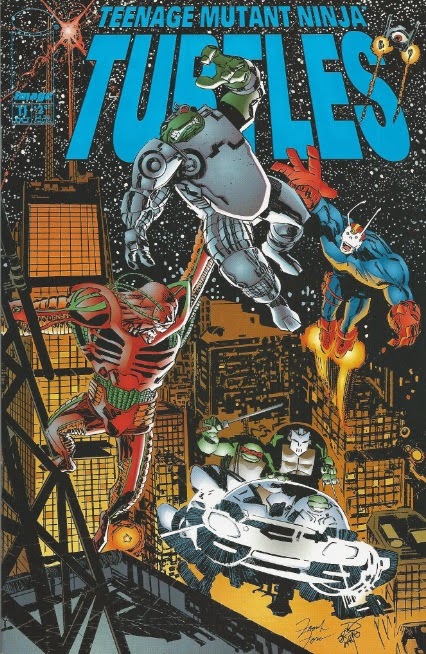 At Rapture’s place, Mike and Sara ‘Horridus’ Hill are enjoying some cartoons and exchanging life stories. One thing leads to another and they begin feverishly making out. Their face-eating is interrupted when Rapture comes home. Mistaking Mike for someone taking advantage of Sara (even though Sara was the one who put the moves on Mikey), she angrily kicks the Turtle to the curb. Walking away happy, Mike exclaims that he’s glad he didn’t visit the strip club with Raph after all. At said strip club, Raph is still duking it out with the goons from the Vicious Circle, but doesn’t intend to quit until he’s finished his meal. 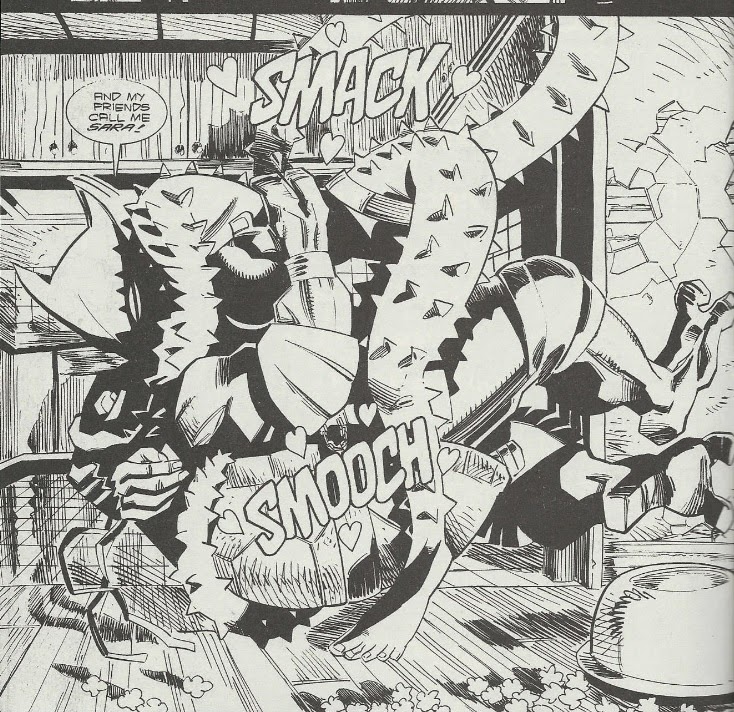 Eight blocks away and twenty stories up, at the Golden Towers Condo building where Judge Pulaski lives, Leo is stuck piloting the Triceraton aircar while reported lady Roxanne Wells tapes the confrontation between Don, the Dragon and Johnny Lee Raeburn (alias “Deathwatch”). Inside, the Dragon attempts to talk Deathwatch out of sucking the lifeforce from Pulaski. Deathwatch, believing his rebirth in outer space as a cyberog monster to be of a divine nature, refuses. Dragon and Don subsequently open fire on him. Deathwatch evades their fire and hurls Dragon out the window into the aircar, rendering him unconscious. Raeburn then turns to deal with Don, linking his cybernetic tentacles into Don’s body, taking control of his motor functions.

Inside Don’s mind, Deathwatch forces the Turtle to relive the fall from the helicopter that mortally wounded him. Lying paralyzed in the alley, Don wonders where the cyborg armor that’s supposed to save his life has gone. Much to Don’s horror, Raeburn appears clutching his armor, exclaiming that he won’t allow it to save him this time; he’s separated the two and is going to make Don experience “true” death. 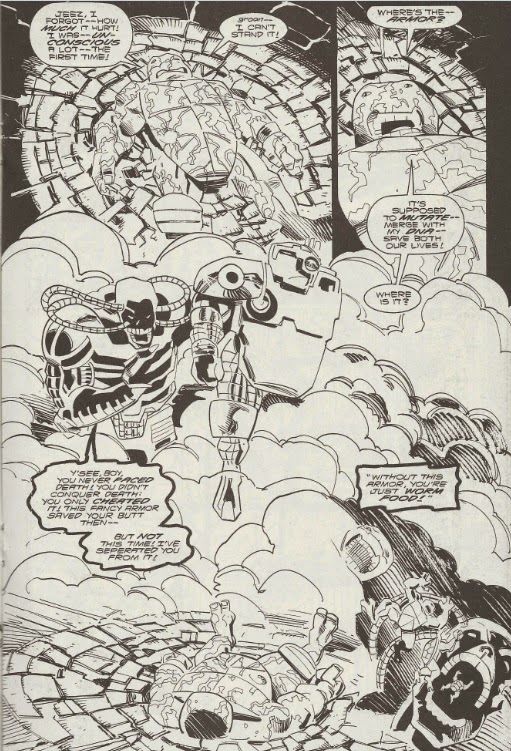 Back outside, Dragon’s impact knocked Leo senseless and Dragon bounces right out of the aircar and toward the street twenty stories below. Roxanne attempts to call 911 on her cell, though it’ll be of little good to Dragon. Luckily for him, however, his old pal Wally shows up just in time to teleport him to safety. Dragon asks where Wally’s partner, Vanguard, is and he explains that he’s being briefed by Roxanne and is heading up the stairs to the apartment.

Back in the apartment, Deathwatch gloats over how much he enjoys feeding on the lifeforce of his victims, preparing to suck Don’s unconscious body dry. Don has other plans, however, and blasts the shocked Deathwatch with his arm cannon. With Deathwatch killed, Don attempts to resuscitate the dying Judge Polaski. Just then, Vanguard bursts into the room, mistaking Don for the “vampire killer” and tackles him.

Outside, Roxanne climbs in through the window to get a better look at the action. Mikey suddenly appears climbing the side of the building, saying he saw the aircar from below and thought Leo could use some help. He takes the controls as Leo follows Roxanne.

Roxanne attempts to talk some sense into Vanguard as he throttles Don, but Dragon saves her the trouble by bursting through the door and physically separating the two. Notes are exchanged and Vanguard explains that the alien device that changed Raeburn into Deathwatch was a Turellan Questprobe: a voracious seeker of information that sucks the entire life experience from its victim, killing them in the process. Dragon tells Don that he’s lucky Raeburn didn’t pull the same stunt on him. Don has bad news: he did. The organic portion of the Cybrog-Don amalgamation was absorbed by Raeburn and now only the cyborg half remains. 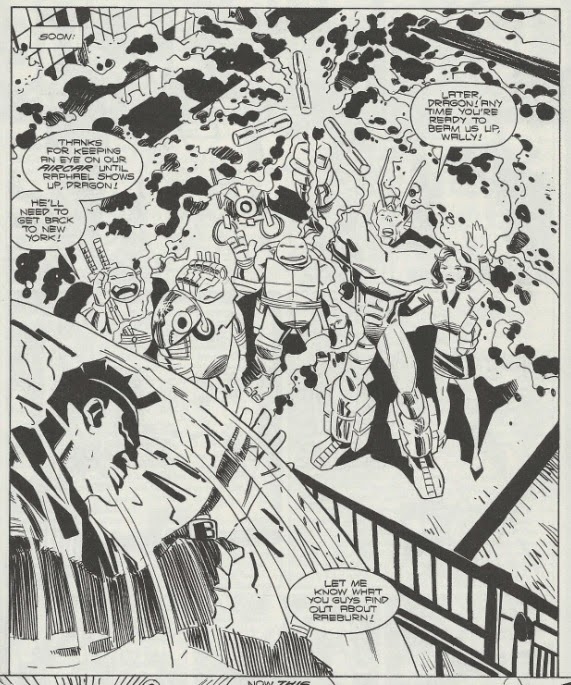 Later, Roxanne wraps up her on-scene report as the police and paramedics tote away the corpse of Raeburn and the barely-alive Judge Polaski. Dragon tells Leo that he’s sorry about Don, though Leo expresses little grief, assured that Don’s still in there and will override the computer entity eventually. Examining Deathwatch, they find no human DNA and no proof that Deathwatch really even was Raeburn. Vanguard offers to thoroughly dissect Deathwatch on his spaceship, and give Cyborg-Don a once-over, as well. Leo leaves the aircar in Dragon’s hands as he, Mike, Cyborg-Don and Roxanne teleport onto the spaceship with Vanguard and Wally.

Back in New York, Casey is on the phone with his mother, explaining the situation with Shadow and the mobsters. He tells her that some people might be coming by claiming he’s won the lottery and not to give them any information. Outside, in a disguised van, two of the mobsters are listening in on the call. Before they can report back, however, a mysterious assailant murders them.

*The Turtles will encounter Dragon again (or appear in the same crowd as him) in The Savage Dragon #41.

The TMNT’s gratuitous tour of the Image “universe” continues into this issue. Granted, their tour of the Image “universe” extended no further than the characters created by Gary Carlson (the series writer) and Erik Larsen (the series editor), but whatever. While I thought the meat of this crossover was rather ham-fisted and, in places (especially in regards to Deathwatch’s origin), outrageously stupid… we got the whole Mikey/Sara relationship out of it, so I’ll concede that the ends justified the means.

Don’s internal struggle with Deathwatch sounds pretty bland in summarization, but Fosco’s art really buts a dynamic spin on it that brings out the horror of the whole ordeal. I particularly liked the sight of a shrieking, bloody, paralyzed Donatello plummeting into the skull-faced jaws of a snickering Deathwatch. As for Don’s newest dilemma, with the computer now taking control of the body and the real Don being “dead”, I’d have dug it a lot more if Leo and Mike had shown some genuine brotherly concern. I harped on this during the opening arc of the book, but it’s a problem I have with Carlson’s writing in general; he seems to shy away from portraying the Turtles as caring for each other in any real capacity. Don is essentially brain-dead and Leo writes it off with nothing more than a, “Meh. Big deal.” Mike isn’t even afforded a reaction. I’m not saying the Turtles have to break down crying every time something bad happens to one of them, but a smidgen of concern for each other’s welfare would be appreciated.

While the Mikey/Sara thing is relegated as the B-plot with only 4 pages (granted, most romantic drama in a superhero comic is regarded this way), it struck me as being the most enjoyable element of the issue. Romance was something entirely new for the Turtles of the Mirage universe (though it had been explored earlier in the Fred Wolf cartoon and the Archie comics). While I’m glad it wasn’t something dwelt on to the point of suffocating the series, as happens with so many superhero comics (the current status quo for Amazing Spider-Man, for example), it was long past due for the Mirage continuity. These are teenagers, after all, and the thought that they have no libido or sex drive is positively absurd. They’re bound to want some action eventually and Mike’s budding romance with Sara was handled especially well.

Overall, though, this issue reeks of the 90s in a very foul way and a rosy four-page subplot isn’t enough to overpower the aroma. It’s even harder to stomach when you aren’t familiar with any of the supporting characters from Savage Dragon. Who the fuck is Vanguard? Wally? I dunno, but it sure was convenient that they came by just in time to resolve the plot.

Grade: D (as in, “Damn, if those Christmas colors on the cover are really what Deathwatch is supposed to be sporting, I’m glad this book is black and white”.)