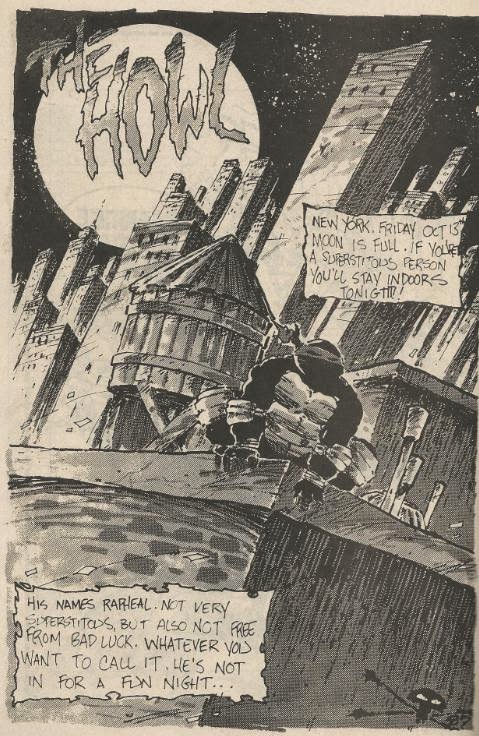 Beneath a full moon, Raph prowls the rooftops, lamenting that he’s likely in for a slow night. His whining is suddenly interrupted by a mysterious and eerie howling. Raph turns around to find a massive, monstrous canine creature sneaking up on him. Raph draws his sai but is too slow; the werewolf hurls him across the rooftop and into a pile of wooden crates. Before Raph can recover, the beast pounces on him and begins closing-in with his claws and fangs. 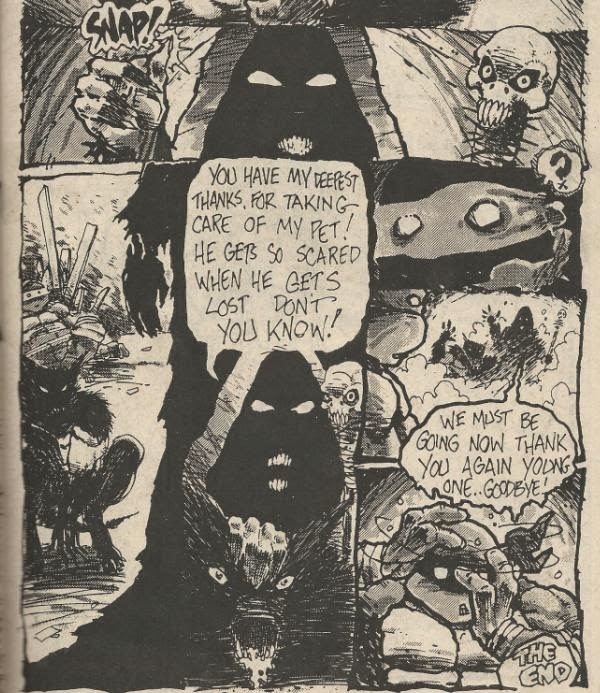 Raph’s bad luck turns around, however, when a dark, hooded figure bearing a skull-topped staff orders the werewolf to stop. The hooded creep thanks Raph for looking after his “pet”, who tends to get frightened when lost. The hooded weirdo and the werewolf cheerfully wave goodbye and then vanish in a cloud of smoke. Raph is still dizzily recovering.

*The original printing of this story contains several spelling errors that were fixed for the Shell Shock printing: "Raphael" was originally misspelled "Rapheal" on Page 1 and "too" was misspelled "to" on Page 2.

A story this awesome should be longer than four pages.

I am an absolute horror fanatic, so needless to say, I relish every story drawn by the great Eric Talbot. I waxed on about my thoughts on his style pretty in-depth in my review for “Not One Word!”, but the guy’s creepy horror-themed art is just phenomenal.

So, naturally, he’s best when employed to draw actual horror-centric TMNT stories! Whoda thunkit? “The Howl” boils down to nothing more than a four-page comedy relief strip, but next to “Turtle Soup and Rabbit Stew”, it ranks as one of the highlights of the “Turtle Soup” one-shot. Although the gag strip nature means that extending it past a handful of pages would have been a bit pointless (contrary to my first sentence in this review), its more the visuals that sell the thing than the “story”.

As it stands, I’m running out of ways to say “the art was cool”, so I’m gonna wrap this up.

Grade: A (as in, “And Raph can look forward to many, many more encounters with werewolves in the future. Lucky him”.)