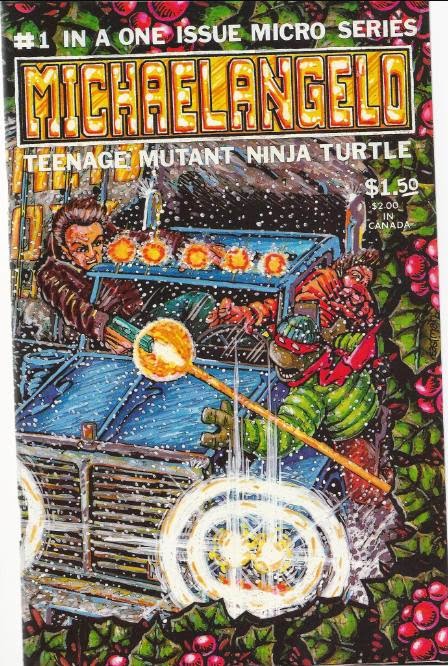 Its Christmas time in the Big Apple and Mike is out and about, enjoying the nighttime Winter festivities in Central Park. While sledding with some kids (and heavily disguised in a coat, hat and scarf), Mike stumbles across a stray kitty cat. Feeling sorry for the freezing little guy, Mike plucks him up and keeps him warm inside his coat. 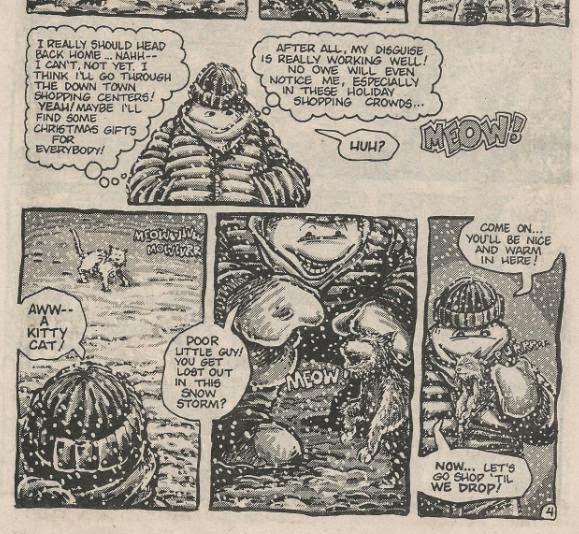 Mike heads to the shopping district and stumbles across “Chet’s Toys” while searching for gifts for his family. While playing with some of the toys, Mike accidentally scares Klunk (the name of his new kitty) and sends the cat scampering into the warehouse. Mike heads after him but finds more than just his new pet. He interrupts a gang of robbers, purloining a truckload of Li'l Orphan Alien toys being donated to the Brown Street Children’s Home. The thieves (Hector, Rico and Gronk) speed off in the truck, but Mike gives chase and snags a dangling chord that got caught in the back doors. Mike swings inside the back of the truck, landing on the pile of stolen toys. 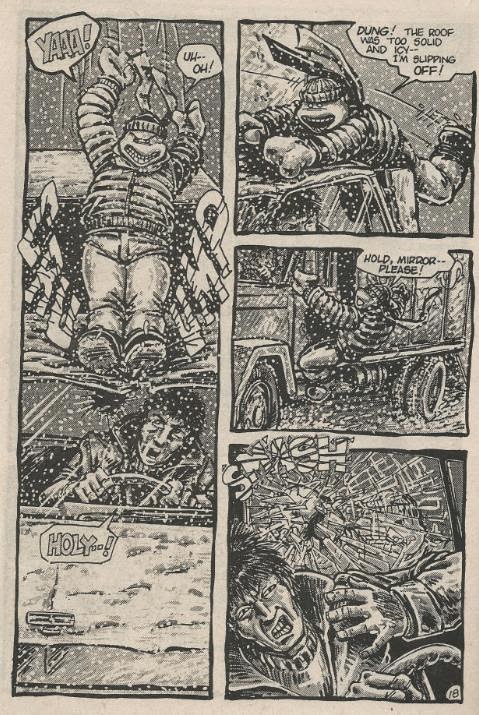 Suspicious, Rico and Gronk draw their guns and go to check the back of the truck. Mike springs out of the door and takes the punks out with ease, but the commotion causes Hector to gun it. Mike crosses through an alley, heading the truck off at the pass. Springing onto the roof, Mike makes his way to the cab and pulls Hector out through the window. He dispatches with the sleazebag, only to be berated by angry traffic. Mike decides to take the truck back to Chet’s Toys as the police arrest the thieves.

While driving, however, more cops spot the stolen truck and give chase. Mike panics and sideswipes the cops (it’s okay, they were planning on stealing a few of the toys for themselves!), then bursts through a roadblock. Mike gains some distance, then hides the truck in an alley as the police speed by. Mike realizes that if he reports the location of the truck to the cops, the toys will be impounded as evidence and the kids at the orphanage won’t get them by Christmas (tomorrow!). Mike grabs Klunk from the back of the truck and decides to go get some help. 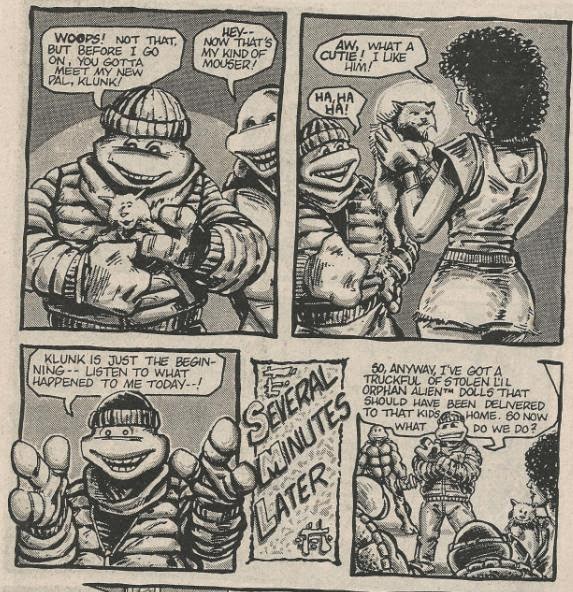 Mike returns to April’s apartment and, after introducing them to Klunk and relaying his adventure, the Turtles and April make a decision… 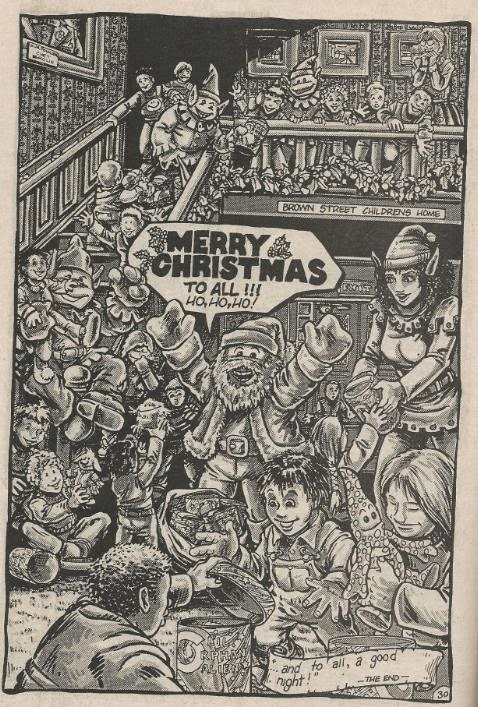 Loading the toys into April’s van, they all head over to the Brown Street Children’s Home and deliver them in person to the happy children, all dressed as elves. All save for Mikey, who dressed as Santa, wishes everyone a Merry Christmas!

*A sign advertising the indie comic “Bloom County” can be seen on page 5.

*Gizmo Sprocket, Fluffy and Soto toys can be seen on page 6. All are characters from Michael Dooney’s “Gizmo” comic.

*Masks for indie comic character Megaton Man and Mirage’s own Fugitoid can be seen on page 7.

*CHET ALERT: the toy store Mike visits is “Chet’s Toys”. “Chet” was a name the Mirage staffers constantly hid into their comics as an in-joke because they… Just liked the name!

*The first printing of this comic contained a bonus “Gizmo” story by Michael Dooney, “One Unconventional Robot”, and a bonus pin-up by Kevin Eastman and some guy named “Mcleodz” if I’m reading that signature right.

Ahhhh, the saccharine beauty of the mandatory feel-good Christmas issue. While I’m not a big fan of the holiday, I oddly enjoy a good Christmas special here and there, and I’ve read far more obnoxiously syrupy yuletide comics (the Christmas issue of Spawn being fairly wretched despite a bitchin’ cover). Though a bit shallow in the story department and, personally, my least favorite of the five TMNT microseries, Michaelangelo #1 isn’t without its positive qualities.

Firstly, it introduces Klunk, the least important important character in Turtle history. But I’ll save my thoughts on that for a review of Tales of the TMNT (Vol. 2) #9.

No, what Michaelangelo #1 does that’s truly worthwhile to the Turtles mythos is establish Mike’s personality. By the time this was published, the ongoing TMNT series had yet to develop a character quirk of any kind for Mike. Leo was the leader, Raph was the hothead, Don was the tech guy… but Mike got nothin’. He was just “the other Turtle”.

Michaelangelo #1 successfully takes “the other Turtle” and fleshes him out as the childish toy-loving geek we all know and… tolerate. Of course, future writers would eventually give Mikey an excess of personality to the point of turning him into the rage-inducing corporate mascot of the franchise, but I think that’s more David Wise’s fault than anybody else’s, so I’ll give Eastman and Laird a break. It is Christmas, after all.

The art in Michaelangelo #1 is busy. I mean really, really busy. Eastman and Laird already had a knack for drawing deserted city streets with ridiculous amounts of gritty detail, but here they draw them filled with people, decked out in lights and decorations and all enshrouded in a constant flurry on falling snow. At times, you really have to stop and search to see what’s going on.

Now, I’ve complained in the past that one of the things that has always infuriated me is when artists draw the Turtles lounging around in their off time… with their bandanas on. I just don’t get that. I can’t stand it. For probably the first time in the series, the Turtles actually get some off time, so Eastman and Laird wisely draw them all sans-bandanas for the length of the issue. It’s a refreshing visual and one I really wish would’ve caught on with more artists or at least on a more consistent level. And dammit, I wish the cartoons and movies would’ve implemented it.

Michaelangelo #1 is a sweet story, if not tooth-rottingly so; but then, it wouldn’t be a Christmas special if it didn’t turn your stomach at least a little bit. As it stands, the issue gave us Klunk and a distinct character for Mikey, so it ranks as a necessary and important chapter in that regard. While the art is busy, there’s still a lot to look at and Eastman and Laird literally jam-pack the pages with Easter Eggs and in-jokes that are lots of fun to look for (I only listed a handful in Turtle Tips; there are more). Michaelangelo #1 may not be my favorite installment in the Microseries, but I appreciate it regardless.

Grade: C- (as in, “Christmas comes but once a year, but the infuriating shopping madness lasts two months”.)