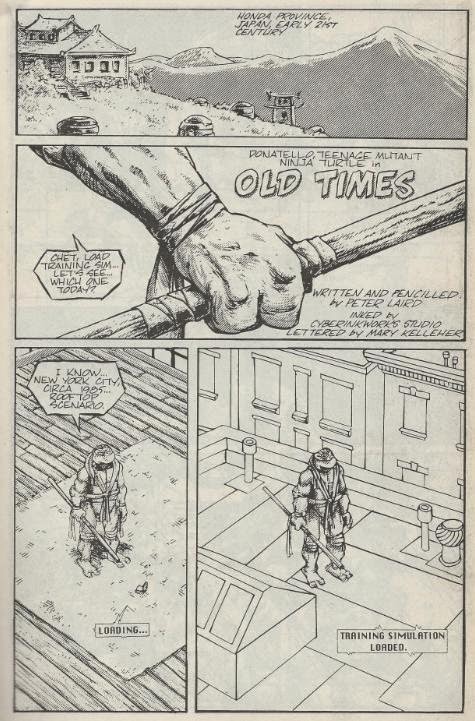 In a house high in the mountains, a much older Donatello orders his computer, Chet, to begin his training simulation; specifically, the New York City circa 1985 rooftop scenario. Don is approached by a horde of Foot Soldiers, but eliminates them with ease and grace. 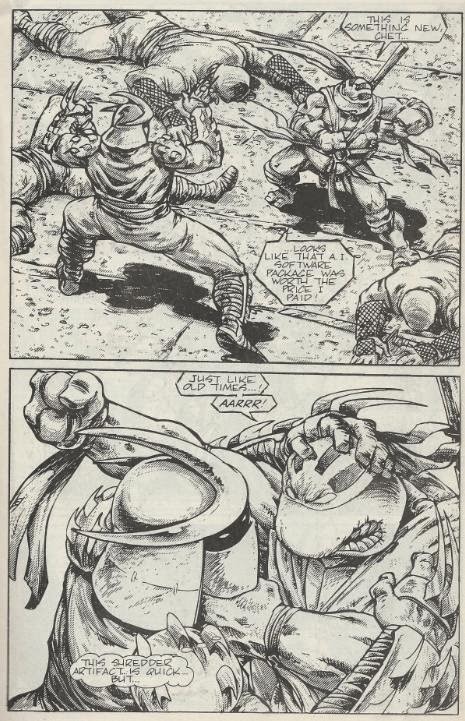 Believing the simulation over, Don is surprised when Chet introduces a new challenge: The Shredder. Don is impressed with the AI package he bought for Chet’s upgrade showing such initiative and takes the Shredder on. He quickly dispatches his foe, but once again, Chet reminds him that the simulation is not yet over. 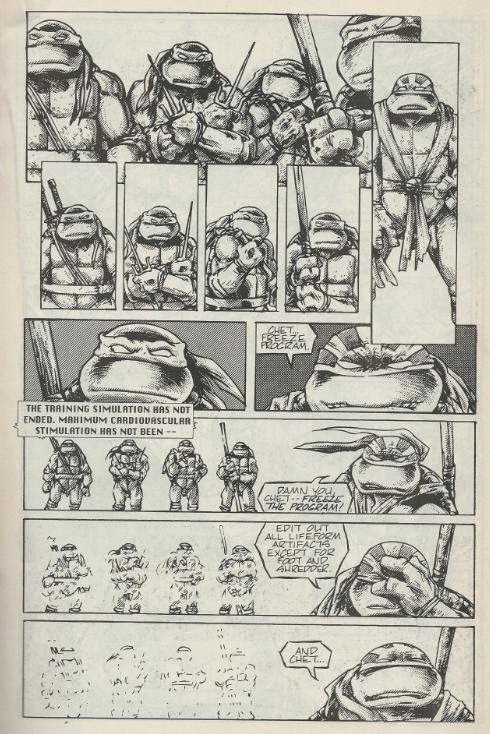 Suddenly, holographic versions of himself and his brothers, circa 1985, approach him. Don is shaken and orders Chet to freeze the program and remove all lifeform artifacts save for the Foot and Shredder. Once Chet has completed the task, a weeping Donatello orders him to never do that again.

*In the letters page for TMNT (Vol. 1) #51, "Old Times" was described as being the first in a series of "Donatello in the future" stories by Peter Laird. For whatever reason, Laird chose not to continue the series beyond this one strip.

*CHET ALERT: The name of Don’s computer is “Chet”. The name “Chet” was an in-joke among the Mirage staff, constantly snuck into various stories because… they just liked that name!

*“Chet” also happens to be the name of the young boy who originally bought the Turtles from the pet shop as seen in the story “Fifteen Years Later”. Whether Don named the computer in his honor or if it is just a coincidence is unknown.

*To date, “Old Times” has never been reprinted.

“Old Times” was my very first encounter with the “future era” of the Mirage universe, and right from the start, it positively intrigued me. I assembled my thoughts on the era in detail in my article on the subject, so I’ll try not to repeat myself in this review.

But needless to say, this early glimpse at the positively dismal future of the TMNT (the third glimpse published, though one of the earliest, chronologically) led to many queries buzzing through my mind. Why was Don living by himself in Japan? Why did he change his bandana? Why did the sight of his brothers bring him to tears? WHAT HAPPENED!?!

Of course, years later, we’d receive some answers, but the cryptic presentation at the time really left me chewing at the bit. For the rest of my thoughts on the subject, check out the lengthier article linked to above.

Anyhow, by 1992, Laird wasn’t drawing the Turtles much anymore, what with being mired in the paperwork of the ever-growing pop culture phenomenon that was his brainchild. So seeing him return to pencil an 8-page anthology episode was a real treat. Don only really begins to show his age in close-ups, where he’s wrinkly and has the worst case of chapped lips I’ve ever seen, but it remains a sobering visual. I could sort of dig the “Rising Sun” bandana, though at times, I have to wonder if people using it know what it actually represents. Brief history lesson: It was the national flag of Japan during their Imperialistic era and the “rays” represented the conquering forces of the Empire reaching out to envelope all they touched. When Japan was defeated in WWII, the flag was changed to just the red circle, no “rays”, to show that their conquering days were done.

So whenever I see an American Japanofile wearing an article of clothing with the “rising sun” flag on it, basically stating “all glory to Japan and their conquering forces that will crush me and my puny country,” I can’t help but laugh a little on the inside shortly before dying a little in there, as well.

But enough of that shit; we get to see Laird draw the Foot and Shredder again!

With Shredder being dead far more often than not in the Mirage series, getting to see him in these comics is a rare treat. Usually, it’s some sort of duplicate or a dream sequence or whatever, much like the holographic simulation seen here, but all that matters is seeing that bitchin' armor for a couple pages. Shredder doesn’t put up much of a fight, and Don takes him out with a single blow to the trachea, but the menacing poses are what counts. I wonder if the ease with which Don dispatches the Shredder illustrates that the Shredder simulation was vastly inferior to the genuine article, or that if by the early 21st century, Don’s ninja skills had increased to the point that circa 1985 Shredder was no longer a challenge? Or maybe a little of both?

Anyhow, “Plastron Café” was a rather forgettable anthology series. I’d honestly say that its’ high points are concisely contained in this first issue (those points being “Old Times” and the Gizmo story, “Sirensong”). Veitch’s Casey Jones story got reprinted, completed and colorized in a 2-part miniseries, which I’d recommend over the incomplete, black and white version seen in “Plastron Café”. Meanwhile, the remaining stories, such as Jim Lawson’s “Guzzi LeMans”, range from mediocre to “I never want to read this again”.

“Old Times”, however, is totally worth tracking this issue down.

Grade: A (as in, “Although if any Turtle were to grow into a Japan-worshipping otaku, I suppose it would be Donnie…”)