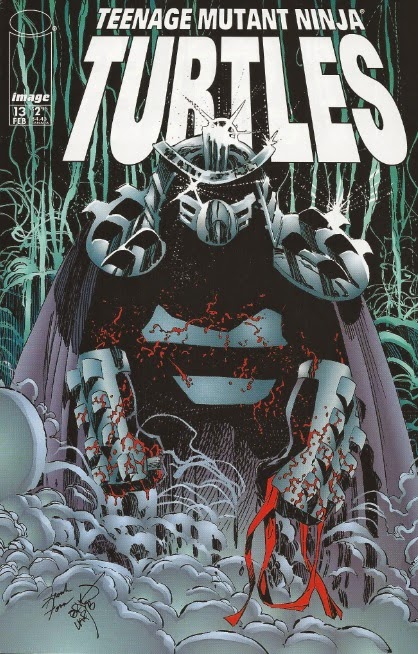 In the town of Sheldon, Arkansas, the Turtles have split from Vanguard and Roxanne to widen their search for Deathwatch, but so far they’ve only found corpses. The computer within Donatello’s body becomes annoyed that they keep referring to him by the former occupant’s name, and asks that they accept that Donatello is gone (having been devoured by Deathwatch). The cyborg then projects a street map and suggests they take their search to the home of Johnny Lee Raeburn’s (alias Deathwatch) mother. 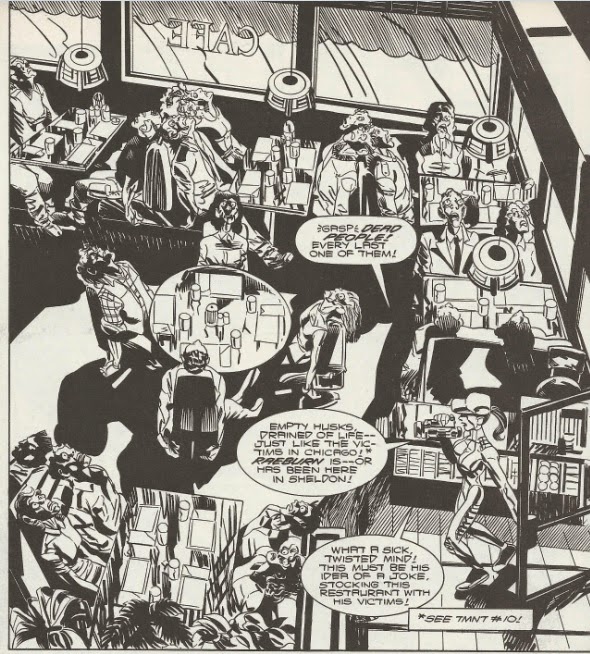 Elsewhere in town, Roxanne and Vanguard are doing just as poorly. Roxanne stumbles upon a diner that looks occupied from the outside, but upon entering, she finds it filled with nothing but corpses, drained of life by Deathwatch. Vanguard suggests they find the Turtles. Roxanne agrees, but asks that he teleport them to his ship first to retrieve something.


At the New York HQ of the Foot, the Puzorelli mobsters have the place sealed off with Raph inside and every other Foot Soldier dead. Raph decides to quit playing hide and seek and attacks with a bow and arrow, followed by close quarters combat. He takes the mobsters out, only to be confronted by their back-up. Raph plucks up a Tommy gun from one of the fallen mooks and opens fire. As he slaughters the mobsters, Raph feels conflicting sensations of joy and guilt, as there is no honor in what he’s doing; it is simply murder. Then, Raph runs out of ammo. 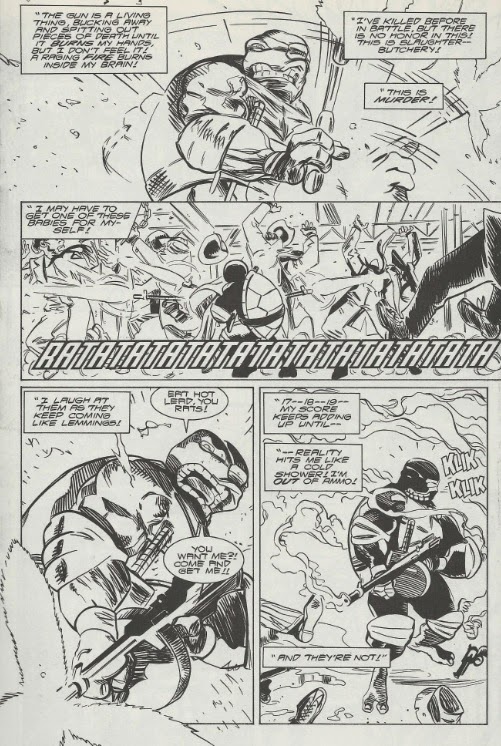 At the home of Agnes Raeburn on 152 Elm Street, the cyborg breaks rank from Leo and Mikey and traipses through the front door. He finds the wheelchair-bound Mrs. Raeburn, but after detecting no life signs, realizes that she’s already fallen victim to Deathwatch. Deathwatch reveals himself and attacks the cyborg. However, the cyborg is prepared and puts up a fight.

Back in New York, Raph buys himself some distance with a handgun, but is quickly backed into a corner. Leaning against the wall, the Turtle prepares to make his last stand, when the wall suddenly gives way to a secret passage. Raph claws his way through the darkness and lights a match, only to come face to face with the Shredder! Raph freaks out, but quickly realizes that the “Shredder” is merely an empty suit of armor. Raph hits the light switch and discovers the Shredder’s secret inner sanctum, where he forged multiple suits of armor as well as stockpiled weapons. Raph recalls all the tales of the Shredder Splinter told him as a child, as well as the two times he helped kill the creep. Coming up with a plot, Raph decides to see if the mobsters outside are afraid of ghosts…

And in Arkansas, the cyborg is being perforated by Deathwatch’s tentacles. Deathwatch begins draining the cyborg of its artificial lifeforce when Vanguard comes to the rescue, tackling the lunatic. Deathwatch is unimpressed and sinks his tentacles into Vanguard. All according to plan, as “Vanguard” was really the amorphous blob, Lurch, incognito! Raeburn is caught in the gooey, lifeless mass long enough for the real Vanguard to strike with his Neural Disruptor. Raeburn vanishes in the blast, having teleported away. Vanguard suggests going after the villain while he’s still injured, but Mike protests. Donny’s body has a massive hole in the middle of it and the cyborg appears to be dying. 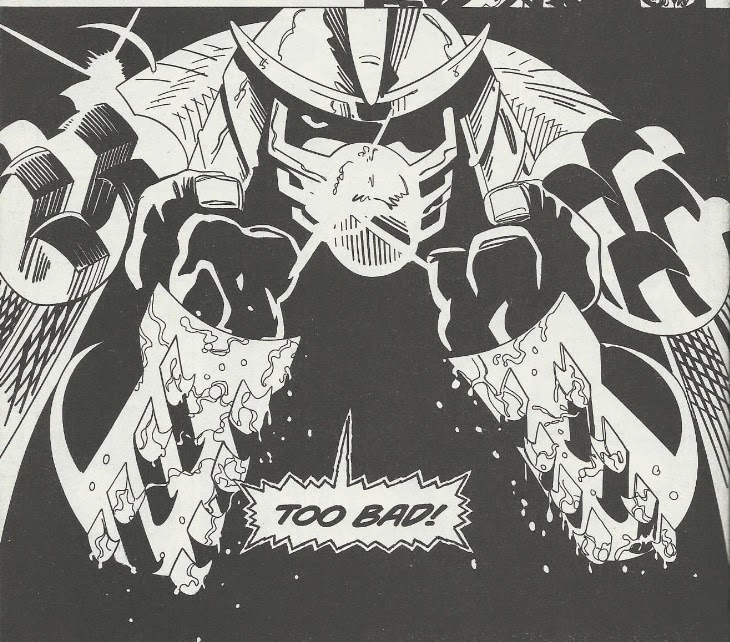 At Foot HQ, a pair of mobsters happen across the secret door. Before they can think twice, the Shredder bursts through the entrance and rips one of the mobsters to pieces. The remaining goon drops his gun and surrenders in total fear. The Shredder proceeds to shred him, anyway.

*Raph previously developed an unhealthy gun-lust in the “Bodycount” miniseries.

While I’ve expressed annoyance with the Vanguard/Deathwatch subplot that’s been running for the last three or so issues of this title, TMNT #13 gets a pass from me thanks in large part to all the horror movie references and trappings. We’ve got callbacks to “Friday the 13th”, “Psycho”, “Last House on the Left” and “A Nightmare on Elm Street”, which I just found amusing when I probably shouldn’t have. Granted, the horror vibe worked best before Deathwatch showed up, as the Turtles stalked an empty town in broad daylight, their search efforts turning up only withered corpses. Sadly, this more atmospheric manner of build-up leads far too short a lifespan, as cyborg-Donny quickly runs afoul of Deathwatch and his terrible dialogue.

Heike’s inking improves dramatically with this issue. The middle panel of page 2 looks especially moody, with Vanguard bathed in the shadows of an overhanging tree. A bit mundane a thing to point out, but I thought it looked rather good.

The highlight of this issue is, of course, Raphael’s decision to don the Shredder armor. I had complained previously that Fosco drew a completely different and heretofore unseen armor for the Shredder in a flashback sequence, but here Carlson writes that off by showing multiple sets of armor forged by the villain. I still don’t care for the way Fosco draws the mouth plate, as it looks like a scuba diver’s breathing apparatus, but that’s a minor niggle. I also just realized upon reading this issue that the abandoned warehouse the Foot are seen operating from is likely meant to be the same warehouse Oroku Saki was seen operating from in TMNT (Vol. 1) #1. It would make sense, what with his secret inner sanctum being located here.

Raph going bonkers with the Tommy gun felt a bit absurd and reeked of 90s comics sensibilities, but I’ll give Carlson some slack as Eastman had already set a precedent for such behavior in his “Bodycount” miniseries. Still, that’s not exactly a character trait I’d ever have liked to have seen revisited. On the flipside, whatever foul flavor that sequence might have left in my mouth was completely washed away once Raph showed up in full-on Shredder regalia. And, crude though it may be, Raph giving into murder segues into a more villainous role as the new Shredder well-enough.

Anyhow, this is a highlight issue for me and representative of a real turning point in the volume. The Deathwatch arc is nearly at an end, as are the gratuitous crossovers with other Image characters, and the book is really starting to get back on its feet.