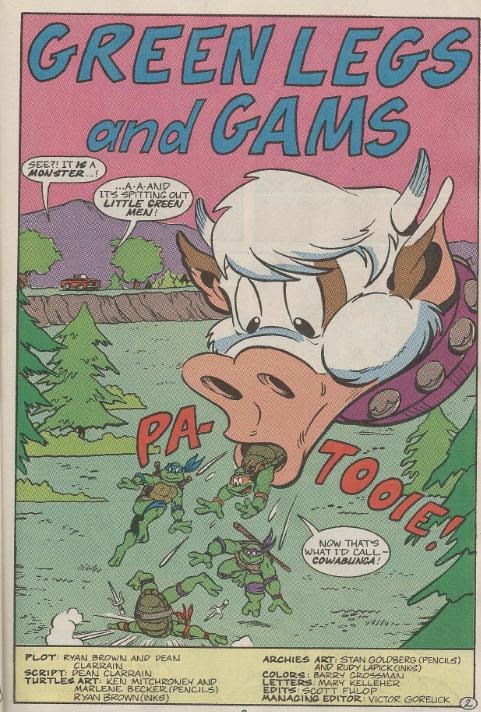 Out in the secluded wilderness just beyond Riverdale, Archie and Betty are about to get their makeout on. Their potential unwed teenage pregnancy is interrupted by the arrival of the disembodied interdimensional bovine noggin, Cudley the Cowlick, who spits the Teenage Mutant Ninja Turtles onto the ground. Archie and Betty make haste back to town to warn everyone.

Meanwhile, the Turtles “thank” Cudley for dropping them off in an alternate Earth so gracefully. As Cudley and Don begin to explain the mechanics of alternate universes to a confused Mike, Raph and Leo cut the dissertation short and ask Cudley to pick them back up in twelve hours. The Turtles then hoof it toward Riverdale.

At Pop’s Chocklit Shoppe, Archie and Betty burst in, attempting to warn the masses of the impending invasion. Betty summarily laughs in their faces while Pops insinuates they’ve been involved in underage drinking. Chuck then steps in, announcing that the Josie and the Pussycats concert is about to begin. The Shoppe quickly empties, leaving behind the disheartened Archie and Betty.

In the suburbs, the Turtles snag some spare clothes from a laundry line (though Leo insists they’ll return them before they go back home) and enter town. The Turtles consider themselves well-disguised, but even the color-blind gaze of Hot Dog can see through their farce. 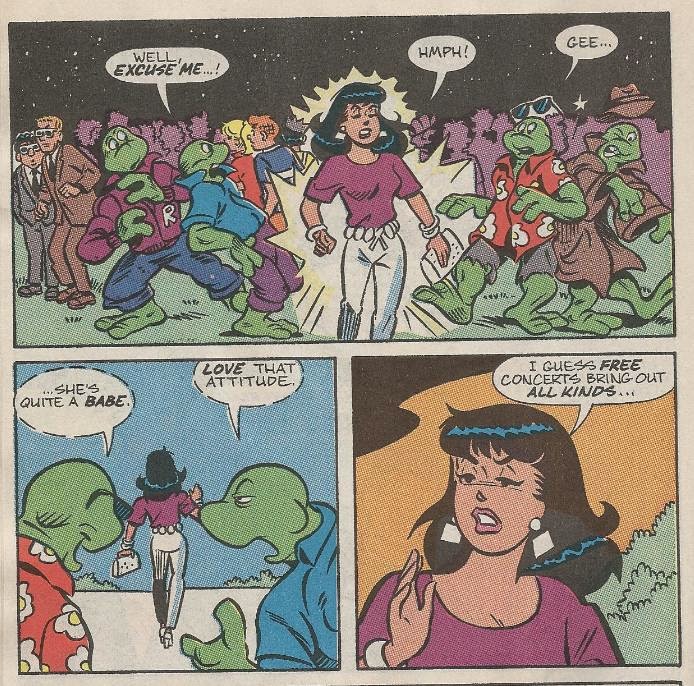 At the concert, all the happenin’ young teens are dancing like 1985 threw up all over 1957. Reggie proceeds to diss Archie's claims of alien invasion, nearly devolving into a fistfight until Veronica breaks the hotheads up. As Veronica storms off to “powder her nose”, she’s assaulted by a pair of spooks claiming to work for the IRS. Insisting she owes them back taxes, the spooks shove the reluctant Veronica into the back of their car and speed off. Unbeknownst to the spooks, both the Turtles and the Archie gang witnessed the entire altercation. The Turtles offer to help rescue their friend, and even recognizing them as the “aliens” he saw earlier, Archie isn’t about to turn down any help. Ditching the concert and piling into Archie’s convertible, the youths give chase (except Reggie, who stays behind for some reason).

At a local roach motel, the spooks lay Veronica down on a motel bed and… Don’t rape her? Not in an Archie comic, kids. Instead, they pull out their guns and force her to call her wealthy daddy to save her (for the low, low price of two million dollars).

Cruising around town, Raph spots the kidnappers’ car. The gang pulls into the motel parking lot as a hungry Michelangelo concocts a brilliant strategy. 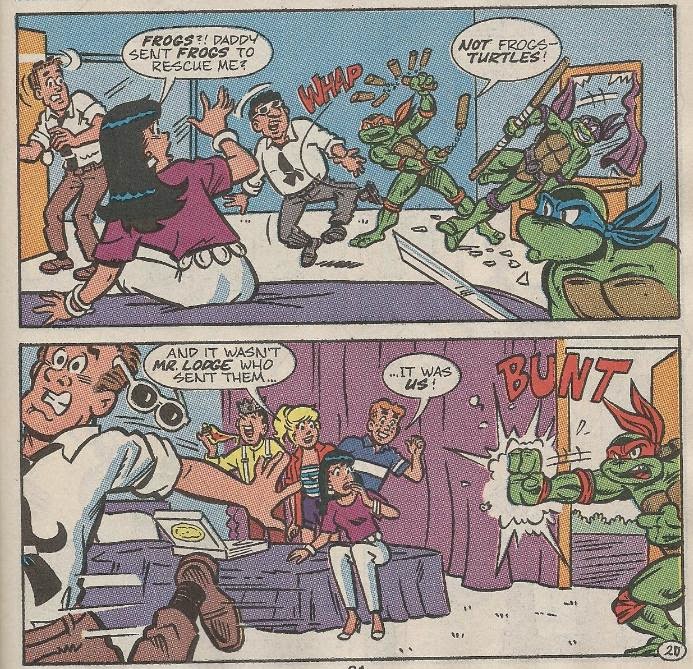 Back in the hotel room, the lead creep hears a knock on the door. He opens it, expecting Hiram Lodge and a sack of money, but getting Jughead delivering a pizza, instead. As the crafty kidnapper chooses to maintain his cover by pulling a gun on the pizzaboy, the Turtles burst through the window and beat the tar out of the bad guys. Veronica lavishes Archie (who didn’t do a damn thing) with a hug of gratitude while Old Man Lodge steps through the door with a suitcase overflowing with bills. Thrilled to see that his daughter has been rescued, Lodge forgoes asking too many questions about giant reptiles and instead offers to buy everyone pizza down at Pop’s. 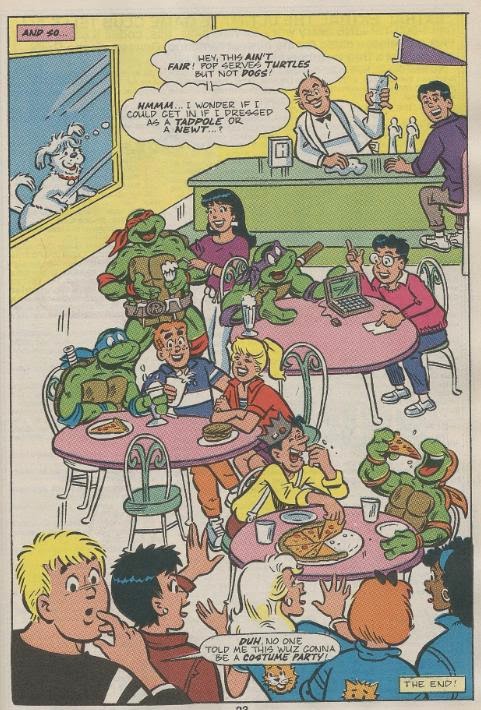 At Pop’s, the Turtles join a slew of ancillary characters about 2/3 of which I recognize for a swell pizza party, as Hot Dog whimpers behind the window, wondering why Pops will allow turtles in his restaurant but not dogs.

*This story could potentially take place between TMNT Adventures #13 and TMNT Adventures #14, as a side-trip made during their return trip to Earth via Cudley’s mouth (the Turtles seem to be going to Riverdale for fun). However, Raph is not wearing his all-black wrestling uniform. That could simply be considered a necessary scrap of discontinuity conceded for the one-shot nature of the publication, or alternatively, this story could take place just about anywhere in the series where there’s a lag in serialization.

*This wouldn’t be the first time Cudley has taken it upon himself to whisk the Turtles off to an alternate version of their Earth, having done so in TMNT Adventures #7 and “A Forgotten TMNT Adventure”.

Thank God for Wikipedia, because I have no clue who half these guys are.

When it comes to the Archie “universe”, I’m actually more averse in the spin-off characters like Josie and the Pussycats and Sabrina the Teenage Witch, thanks in large part to their various cartoons and TV series. In regards to Archie, though, I never saw his cartoon series when I was a kid and I only recognized him as the douchebag behind “Sugar, Sugar, Doot doot doot doot doot doooooo…” And yet Archie and the gang are so ingrained in the popular culture that without having ever read an Archie comic in my life or having ever seen an Archie cartoon, I still recognized guys like Jughead and Moose at a glance. Everyone else? Wikipedia that shit.

The story here is neither enthralling nor exciting (especially when compared to the other tales collected in the book). A very shallow adventure contrived to get these characters to meet for no good reason. Considering Archie comics have been consistently published for at least 120 consecutive years, I can’t help but think that even by 1991, there must have already been scores of plots revolving around Veronica getting kidnapped for ransom.

I wonder how the art for this story was produced, considering the pencils for the Turtles and the Archies were done separately? However it was done, the characters mesh seamlessly and Mitchroney’s style doesn’t conflict with Goldberg’s on any distracting level. Mitchroney’s expressive work shines through as usual in this story and the Turtles manage some very humorous faces that wring droplets of genuine entertainment value out of several rather lousy jokes. As is Archie tradition, the characters look precisely the way they have for the previous millennia and so Goldberg’s pencils do tend to pale in comparison to Mitchroney’s more dynamic work.

If I have one complaint about Mitchroney’s efforts, though, it’s that the Turtles are impossible to distinguish when in their disguises. I know it would’ve been seen as “contrived” if they’d selected conveniently color-coordinated clothing from the laundry line, but this isn’t exactly the most cerebral comic on the rack, either. As it is, Raph is wearing a blue shirt, Mike is wearing a red shirt, Leo is wearing a purple jacket and Don is wearing a brown trenchcoat. Their personalities don’t really overtly display themselves until pages 14-15, so until then, you’re sort of wondering just who the Hell is who.

Also, while I’m no Archie aficionado, I thought the ginger kid rode around in a jalopy, not a slick red convertible?

Anyway, in a comic titled “TMNT Meet Archie”, you’d think the story where the TMNT meet Archie would be the highlight of the book, but you’d be wrong. As is, “Green Legs and Gams” is a very forgettable diversion made amusing only by the fact that I instinctively read Chuck’s single line of dialogue in Alfonso Ribierno’s voice and that seemed hilarious to me for some reason.