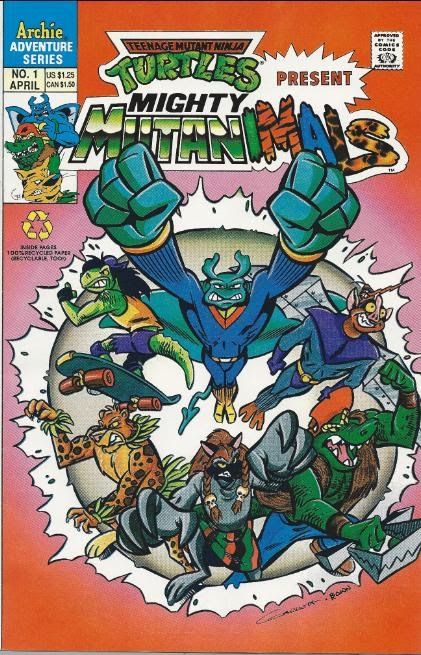 In the sky above the desert, a bald eagle soars. Below, a rider on horseback races across the wasteland. The rider is revealed to be Death. Death clutches a patch of leopard fur, rubs it to its face and then races onward. As the patch of fur is picked up in the breeze, the eagle snatches it in its talons and follows the Grim Reaper.

Off the coast of South America, Mondo Gecko is having a “bodacious” time, skating the side of an abandoned ship, the Dorian Grey, like a halfpipe. Wingnut and Screwloose find his antics irritating and take off.

From a raft out in the water, Kid Terra watches them through his binoculars and wallows in his own despair. He feels genuinely regretful for the things he did while under the employ of Null; an emotion which grows tenfold once he considers how hard it must be for the various mutants he’s met to find their place in the world. 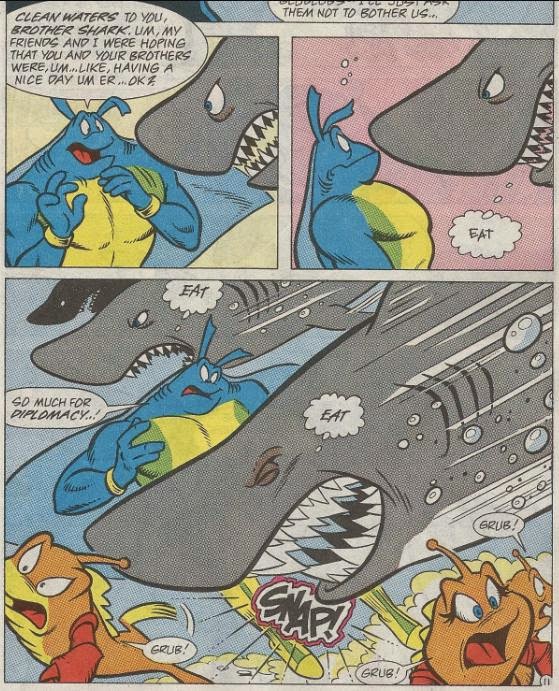 Below, Man Ray leads numerous Glublub refugees (whose homeland was destroyed by Null’s toxic pollution) to their new home of Valle De La Ninfa Marina, a marine nature preserve. The Glublub’s are grateful for his help, though the local sharks are hungry. Man Ray uses his Aquaman-like powers to summon the shark’s natural enemy, the stingray. The stingrays drive the sharks away and Man Ray leaves the Glublubs in peace so he can rendezvous with Kid Terra; whom he isn’t very fond of. An uneasy conversation follows, as Terra assures Ray that he never intended to kill his friend, Bubbla the Glublub; he intended to kill him. Man Ray is touched, but Terra expresses his guilt and vows to use all his knowledge of Null’s operation to bring the villain to justice. Man Ray and Terra part on uneasy terms.

High above the jungle, Wingnut and Screwloose yearn for their lost homeworld of Huanu, though find brief joy among a flock of vampire bats brought out by the setting sun. 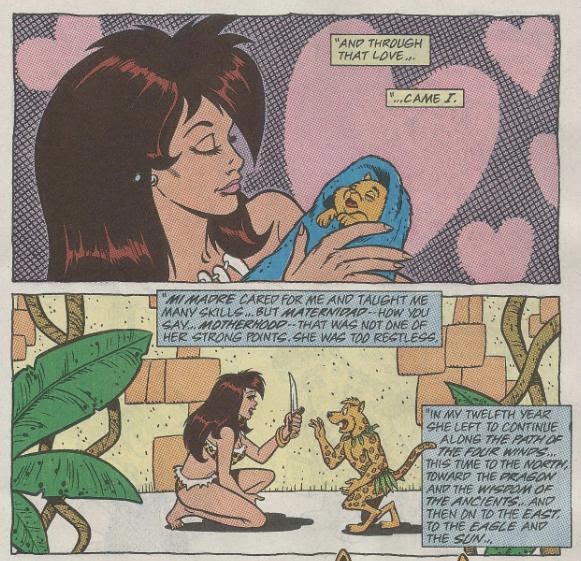 In an ancient temple built by an unknown civilization, Jagwar calls the rest of the Mutanimals (sans Wingnut and Screwloose) to a meeting. Jagwar asks his friends to eat the fruit of the jungala tree, as its mystical properties will allow them to share a vision; a vision of his mother, Juntarra, who has been missing for six years. Many years before that, though, Juntarra’s restless spirit sent her on a quest to the south, following the path of the four winds. The south was the Path of the Serpent, where she was able to shed her previous life. The second path, to the west, was the Path of the Jaguar, where she faced her fear of death. Juntarra sought out the Jaguar Spirit, Yaguaro, and the two fell in love. Juntarra then gave birth to Jagwar, but being a rather poor mother, left him at age 12 to continue her journey. That was six years ago…

Suddenly, Jagwar is disturbed by the arrival of his father, Yaguaro. Yaguaro tells Jagwar that his mother has succeeded in following the third path to the east, the Path of the Dragon. He warns Jagwar that a great danger approaches her and that he, as a spirit, is powerless to stop it. 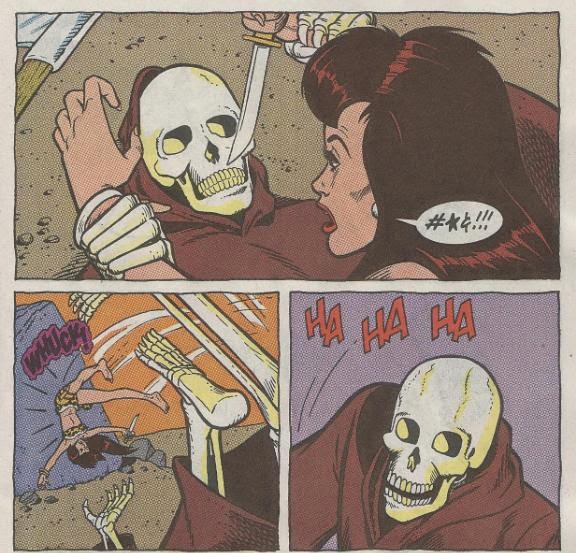 Indeed, out in the desert, the leopard skin-clad Juntarra is spied by the eagle, who swoops down to deliver the patch of fur it had caught. Juntarra is then faced by the figure of Death. Juntarra succeeds in decapitating the Reaper with her dagger, but the spectre only laughs and knocks her out with the blunt end of its scythe. Putting its head back on, Death places Juntarra on his horse and rides off.

Back at the temple, Jagwar observes the whole ordeal and declares that he must save his mother. The other Mutanimals insist they have his back.

*The fate of Wingnut and Screwloose’s planet, Huanu, was mentioned in TMNT Adventures #8.

*This issue also included a bonus pin-up of Dreadmon by Eric Talbot.

The Mighty Mutanimals ongoing series gets underway with its first storyarc: the bestiality-riffic origin of Jagwar.

Anyhow, as an opening issue, it does a good job of introducing us to each character one at a time without overloading the audience with exposition describing their every origin. While new readers might be a tad confused just where these weirdos came from, the segments at least serve as primers to their unique personalities (save Leatherhead and Dreadmon, who totally get the shaft in this issue for some odd reason, while Mondo just skating and parroting stupid catchphrases doesn’t exactly count as endearing, either).

As an introductory issue, not a whole lot happens, but it’s a necessary evil and I won’t hold it against Clarrain (alias Stephen Murphy). As for regular readers who have been following the characters from TMNT Adventures to the Mutanimals miniseries and finally to here, we’re at least given some introspection from the cast, which is perfectly enjoyable if you have an affection for these guys (and why would you be reading this title if you didn’t?).

Wingnut and Screwloose being the standoffish members of the team was a strange choice, considering they were always presented as the zaniest, most “random” persons in the lineup. The fairly shallow “wacky” guys are given a moment of depth as they reflect upon their lost planet and races. Don’t get me wrong, I like their insanely bonkers attitudes, but a little emotional range isn’t a bad thing by any stretch.

The real drama, in my opinion, came from Man Ray’s discussion with Kid Terra. Kid Terra did an awful thing in the TMNT Adventures series and there’s simply no way around that. He was one of the bad guys and in his attempt to kill one of the good guys, he killed an innocent bystander, instead. Although he later tried to make amends by helping to save the Earth from Maligna, can he really be forgiven? It’s an interesting plot point that I always found fascinating; just when is it okay to hold a grudge and never, ever forgive someone? If a gang member had killed a friend of mine, served their time in jail, would I forgive them afterward or would I still want to see them dead? Here’s hoping I never have to find out.

Jagwar retreads his origin as he told it in the second issue of the Mutanimals miniseries, which would be kind of boring, though he at least adds some additional depth to it. In all these flashbacks to his birth, though, we never once see the Jaguar Spirit taking on any other form but a regular Jaguar. The fact that Jagwar comes to life as a human/jaguar hybrid only indicates the absolute worst case scenario.

Anyhow, Garret Ho’s art is a treat. His Mutanimals are all very cartoonish and “fun”-looking, if not straddling the line of “cute”. But Ho quickly switches gears with his interpretation of the Grim Reaper, who is as dark and intimidating as a hooded skeleton brandishing a scythe ought to be.

All in all, issue #1 is mostly a plot set-up and character introductory story, but that’s what most #1s are, really. Clarrain keeps his eco preaching to a minimum, only straying in that direction briefly as Kid Terra ponders what humanity is doing to the environment and animal habitats. However, I have to question the marketing value of this:

Advertising your comic as being made from 100% recycled paper is cool, but should you really be encouraging kids to recycle your comic, too? I mean, I’ve never viewed comics as something to be thrown away when you’re done with them and anyhow, telling kids to toss your comic in the trash, recyclable or not, doesn’t strike me as a particularly wise marketing strategy.

Grade: B- (as in, “But while Ho’s Dreadmon is borderline adorable, Talbot’s Dreadmon will tear your throat out and devour your kidneys”.)
Posted by TMNT Entity at 4:40 PM