My 10 Favorite Images from this Russian TMNT Comic 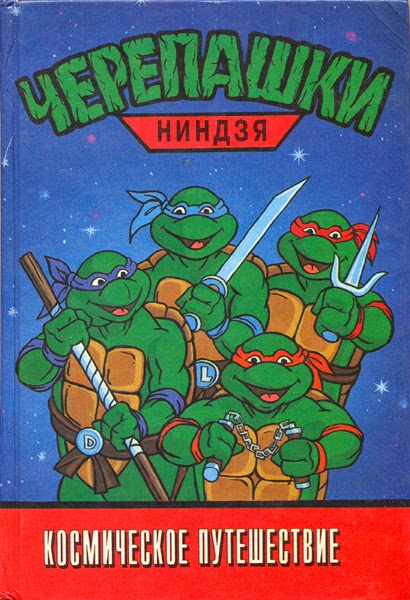 So apparently, way back in the 80s and early 90s, a Russian company known as Minsk Publishing produced a long-running series of Teenage Mutant Ninja Turtles comics (though they were more like illustrated text stories, really). These comics were completely unsanctioned and unofficial and typically involved the Turtles encountering various characters and situations from blockbuster American films.

A Russian fansite which I cannot read has uploaded complete galleries of all the artwork in this long-running comic series and you should stop whatever it is that you’re doing and check it out.

Because these things are completely and utterly insane.

The art in these comics is reminiscent of those famous Polish movie posters you see online every now and then; not so much good or bad but so positively demented that it must be seen to be believed. There are well over a hundred selections on this site, but I managed to weed out ten of my absolute favorites, which I would like to share with you right now, in no particular order of preference. 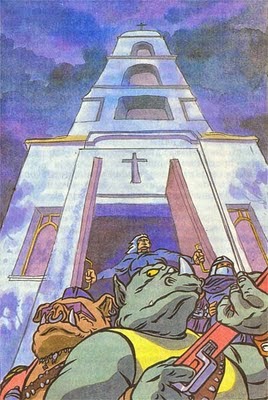 I’m fairly certain that this was purloined from the box cover to a low-budget straight-to-video zombie film. You’ll quickly find that the joy in observing these Russian art pages is the absolute lack of context, as only the artwork is reproduced and not the text (as if that would have made a difference, anyway).

I don’t know who that guy in the background is supposed to be, but all I do know is that this is likely the most threatening the villains from the Fred Wolf TMNT series have ever appeared.

And then I notice that Rocksteady’s “shotgun” appears to be nothing more than a pink plank of wood with a trigger glued onto the bottom and the whole experience falls apart.


9: That could’ve been Jean-Claude Van Damme. 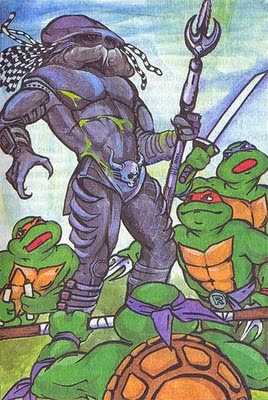 I’m not sure if the Turtles were brutally disfigured before or after their harrowing battle with the Predator, to be honest. I’m also not sure if those are supposed to be dreadlocks or if that’s intended to be “The Predator as played by Beetlejuice”. Knowing these comics, I wouldn’t be surprised if it were the latter.


8: If this one doesn’t scare you, you’re already dead. 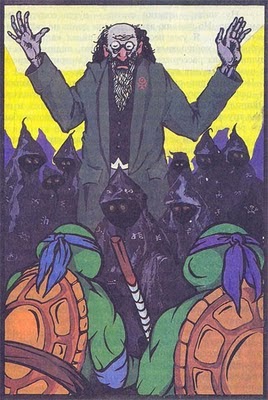 If you scroll through the galleries in chronological order, you’ll notice that Minsk seemed to have had a major thing for American horror movies. The Turtles proceed to fight facsimiles of Freddy Krueger (whom they defeat by shoving off a cliff) and Jason Voorhees (wearing his pillow sack mask from “Friday the 13th part II”). However, if there’s one horror crossover I would have least expected to see, it would have to be Don Coscarelli’s “Phantasm” series.

While the dwarves seem to make the transition fairly intact, albeit with robes that look like they were scavenged and assembled from fancy couch upholstery, I don’t know what to make of the Tall Man, there. It looks like they took Angus Scrimm and amalgamated him with Sigmund Freud and a baboon.

Oddly, “Phantasm” wouldn’t even be the most obscure horror film rip-off that Minsk churned out. Keep your eyes open for a manhandling of “Leprechaun” and “Leprechaun 2”.

Sadly, this comic seems to have been cancelled before it could steal ideas from the apex of that series, “Leprechaun in the Hood”. 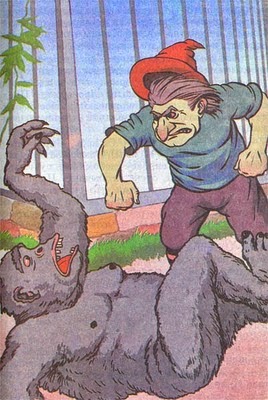 Because what says “Teenage Mutant Ninja Turtles” better than a drunken gnome pummeling a gorilla with his bare fists?

This is the only image to make the list that doesn’t feature any TMNT characters, as I tried to only include ones that did. However, only about half the images in the gallery actually boasted Turtles in them. The rest featured the ancillary characters of that issue’s story engaging in their own brand of insanity. Often times, the events from those images don’t even seem to link up with the ones featuring the Turtles, resulting in what appears to be totally tangential lunacy.

In other words, scrolling through these galleries is like watching an episode of Family Guy. “You think that’s bad? Remember the time that gnome beat up that gorilla?”


6: And then they all met Batman 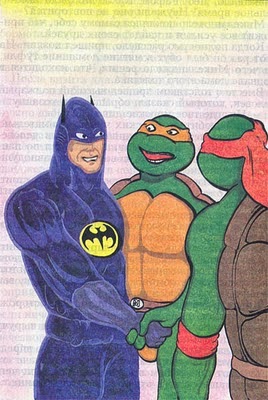 Oddly, the art quality in these things only seems to completely self-destruct whenever Batma-, er, Бетмен is involved. And he is involved quite frequently.

Бетмен appears to be some sort of returning character in this series, even going so far as to hook up with April O’Neil (much to the chagrin of Michelangelo). The design for Бетмен bounces back and forth between his classic comic book model and his costume from the Michael Keaton films. While the comic book version is often shown demonstrating a softer demeanor, crying extensively before making out with April, the Michael Keaton one is the most hilarious, having seemingly stolen his decorative cowl wings from Captain America. 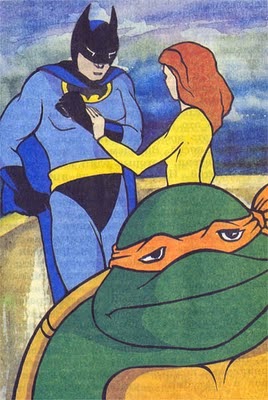 I have to stop and wonder how many bottles of Vodka the artists were paid to draw these comics (that is the currency in Russia, right?). After all, some of this stuff looks like something you’d see in a letter’s column of an American comic, having been submitted by little Timmy from Arkansas because Бетмен is his most favoritest superhero in the whole wide world.

5: I am confused and discomforted. 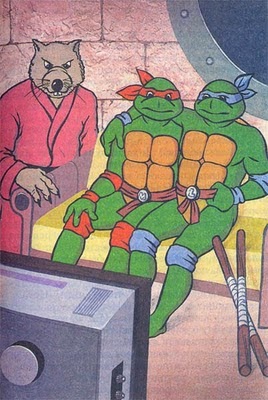 There’s something off about this image…

Aha! I see what it is! Donatello left two of his bo staffs sitting by the couch! Now, first of all, Don only ever carries one bo staff at a time, so what would he have been doing with two? Secondly, he’s nowhere to be seen in this piece, so why didn’t he bother to clean up after himself?

I knew something about this image bugged me.


4: Meanwhile, beneath the Meadowlands… 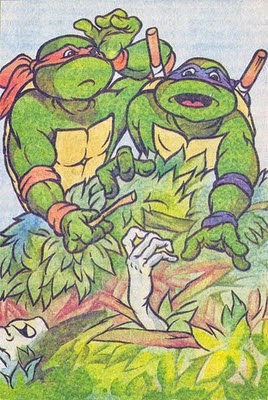 Donatello: “He was dead when I got here, I swear! I don’t know how it happened!”

Michelangelo: “Chill, dude! We can totally take care of this! We’ll just hide the body here and, like, no one’ll ever find it!” 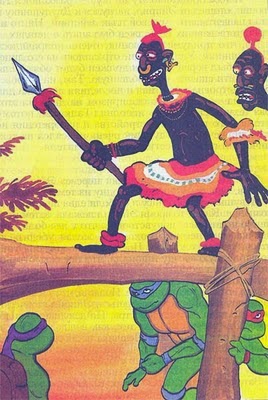 Now this here is one of the most brilliant examples of audience misdirection I’ve ever seen.

Your eyes are so magnetically drawn to Ooga Booga and Shaka Zulu up there that you probably didn’t even notice the Turtles on the lower half of the image. And if you did spot them, I doubt you took the time to realize that not only is Leo missing a leg, but Raph is totally doing one of those gags that Elmer Fudd pulls when he’s hunting wabbits. You know, where he sneaks behind a tree that’s about 7 centimeters wide, completely vanishes, then sticks his head out the other side?

In all likelihood, the artist behind this piece figured he needn’t bother with drawing the rest of the Turtles, since whoever was reading this comic would most assuredly hurl it in the trash after their first glance at this page.


2: The Lion King IV: We Aren’t Even Trying Anymore 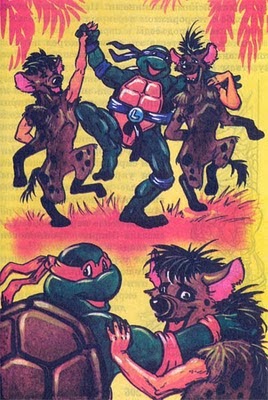 So something in this story caused the Turtles to befriend a tribe of four-armed mutant hyenas that appear to have stepped directly out of “The Lion King”. That much is obvious.

But I’m not sure which concerns me more: the fact that Leo is exchanging longing glances with the hyena to his left, or that Mike has already hooked up with one bearing hillbilly teeth and a lazy eye. My gut wants me to believe this story takes place in the African Savannah, but logic would seem to imply a more Western location. And by “Western”, I mean “West Virginia”. 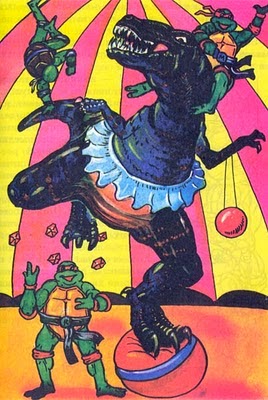 What you’ll find in the opening prologue of that film is something completely unique in the art of cinema. You’ll see dozens of disfigured monster-men running around a mansion, screaming their lungs out, as legendary jazz vocalist Annie Ross barks orders at them, all punctuated by scenes of the blob-like puppet monster Belial having intercourse with another blob-like puppet monster. The prologue ends with Belial being forcibly sewn onto his brother’s stomach with a knitting needle and a length of yarn.

If you have no prior knowledge of the “Basket Case” film series to put that prologue into context, you will not be able to decipher any sort of narrative or focus. The only thing you will witness is an all-encompassing descent into madness.

And that’s what this image is. Even with context, I cannot imagine it being anything more than the fevered work of a deranged Russian artist with nothing to lose.

There’s a very good reason we spent the majority of the 20th century fearing these people.