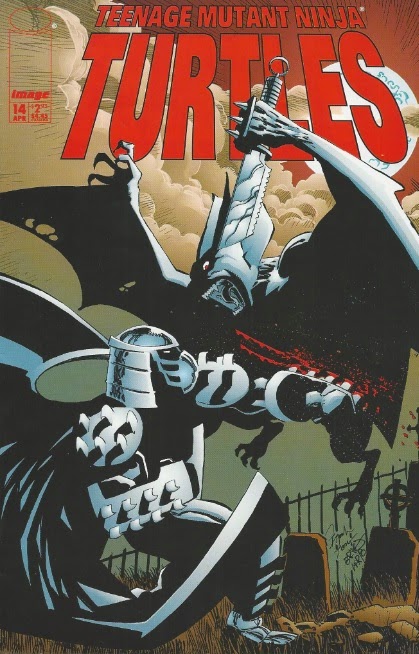 At Foot HQ, the remaining members of the Puzorelli mob are running for their lives. They’re too slow, and the Shredder (actually Raph) proceeds to pick them off one at a time, until only a single mobster is left. Raph tells him he has five minutes to tell his boss, Tony Puzorelli, that the Shredder is coming for him. As the frightened mobster leaves, Raph recalls how he could have killed Puzorelli before and let sympathy get in his way. Suddenly, a handful of Foot Soldiers drop from their hiding spot and demand that Raph remove their dead master’s armor. Raph berates their cowardice; hiding from battle and only showing courage when only one foe remains. One of the Foot Soldiers attacks Raph, but is quickly killed. The remaining Foot ninja drop to their knees, holding their daggers to their stomachs in the ritual of seppuku, offering their lives to their new master. Raph, surprising even himself, agrees to lead them and the Foot Soldiers follow him to Puzorelli’s. 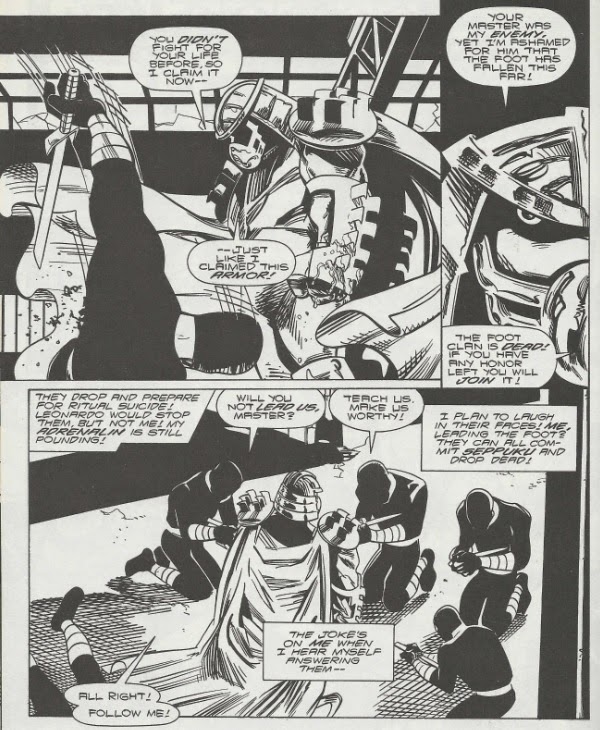 Elsewhere, in a park, a man is playing frisbee with his dog. As the dog goes out to catch the disk, he’s plucked up by a giant vampire bat (actually Splinter). The bat carries the dog to the roof of an industrial plant and feeds.


In Arkansas, Leo spots Deathwatch escaping in his spaceship and runs back to Vanguard, Roxanne and his brothers, encouraging them to give chase. Mikey tells Leo that Don has been mortally wounded by Deathwatch, but Leo shrugs the matter off, insisting that Donny was already dead and if the computer infesting his corpse dies, who cares? The cyborg armor cares, though, and attempts to survive by possessing Mike. A quick katana chop from Leo prevents that and they all watch as the cyborg armor slowly dies. Without warning, the amorphous blob, Lurch, grabs Don’s body and absorbs the armor. Binding to Lurch, the computer tells the Turtles that Deathwatch did not destroy Don’s consciousness as he claimed, but that Don’s mind was not in his body, either. Then, the cyborg-Lurch amalgamation flies off into the sky on a jetpack or something stupid like that. Don’s body is still dying, however, and Roxanne insists that they have to keep it alive until they can deduce the whereabouts of his mind and combine the two once more. With that said, Vanguard has Wally teleport them all back to his spaceship. 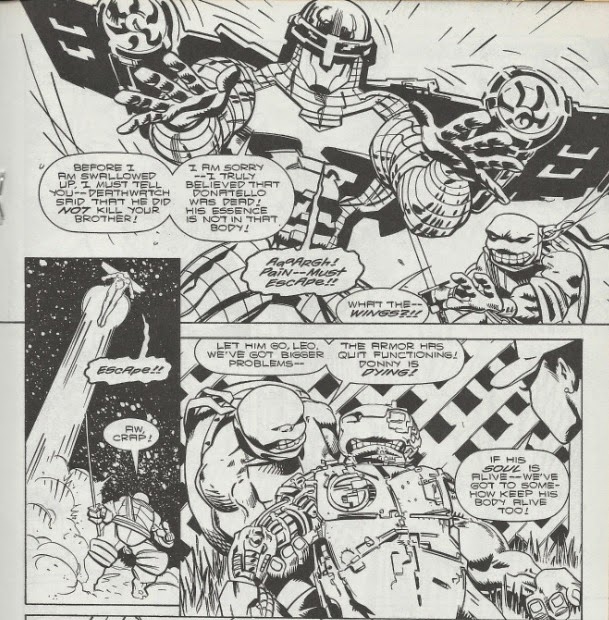 At Tony Puzorelli’s villa on the West End, Tony angrily shoots the messenger left from the Foot massacre, refusing to believe that the Shredder could still be alive. His mistake, as the Shredder enters through the window and disarms his bodyguard/nephew, Joseph, with a sai. Shredder has a heart-to-heart with Tony, saying that he’s changed his mind about killing him. He tells Tony that his granddaughter is with the family she belongs with and to forget about her. The Shredder assures Tony that the Foot will give him a full refund for not delivering the child and that the bodies of his fifty-two men killed at the Foot HQ massacre will be returned to him in the morning. Puzorelli reluctantly accepts the Shredder’s peace terms and the Foot exit the way they came in. On the way out, however, Raph let's Puzorelli know that Joseph has been getting it on with his mistress behind his back. Running across the rooftops, Raph ponders that he has a lot of work to do rebuilding the Foot Clan.

In the astral plane, the spirit of Donatello encounters the spirit of Splinter, mutated into a bat. Don tells bat-Splinter that he needs to be restored to his original self and that he’s the only one who can return his consciousness back to his body. The vampire-Splinter rejects Don’s words and wakes up in the industrial plant. He’s then frightened by a security guard and flies off. From the air, he spots Raph and the Foot Soldiers. Though his memories are fuzzy, Splinter recalls the Shredder armor as being that of his greatest enemy. 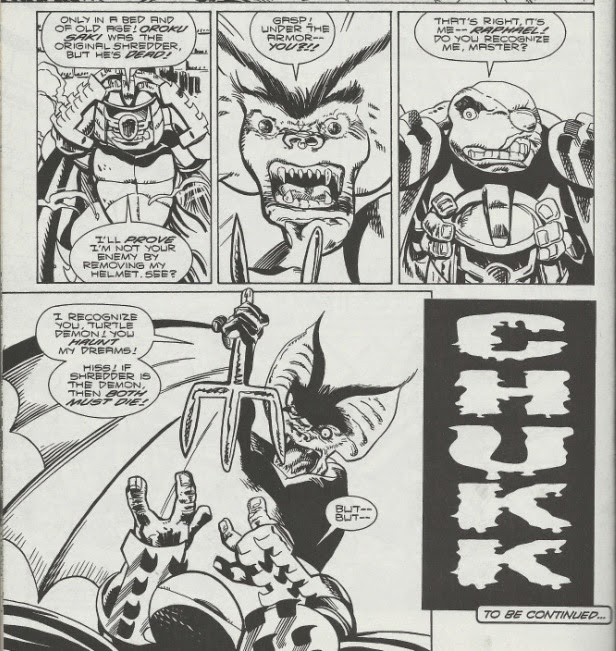 Splinter swoops down and attacks Raph. Raph orders his Foot Soldiers to stand down, as he doesn’t want his master hurt. Raph removes his helmet to show Splinter that he isn’t Oroku Saki. Splinter only recognizes him as “the turtle demon” that haunted his dreams and plunges a pitchfork toward his son.

*Joey/Joseph was shown hooking up secretly with Tony Puzorelli's mistress in TMNT (Vol. 3) #8.

The tedious diversion into crossover country is winding down as Image’s TMNT series starts revisiting the plot threads it began earlier in the series. I’ve expressed my derision toward the “Image Universe Tour” arc before, so I’ll try not to bore you with another pissing and moaning session, but in the end, it didn’t amount to a whole lot. In the letters pages of previous issues, either Carlson or Larsen explained that issue sales went up whenever another Image character appeared on the cover, thus facilitating the desire to churn out a whole heap of crossovers all at once. Volume 3 never boasted particularly impressive sales, so I can see the need to do a cheap cash-grab like this, but it’s kind of hard to forgive the toll it took on the narrative.

The fact that Deathwatch just unceremoniously escapes into space after being the focal point of four whole issues, then is never seen again in any comic ever, just leaves you with an empty "What was the fuckin' POINT of all this nonsense!?" feeling that won't go away.

Anyhow, Raph begins taking command of the Foot in this issue and that storyline couldn’t be more awesome. There have been scores of stories where Raph does battle with his own inner demons and rage issues, but always ends up on the side of angels by the time the tale is finished. This storyline from Volume 3 is completely the opposite. We get to see Raph “succumbing to the Dark Side”, and though he fools himself into thinking he can restore honor to a global crime syndicate, he ultimately becomes the slaughter-happy lunatic he’d been fighting to escape in so many other stories. This was probably the last time that the character of Raphael ever felt truly interesting to me, as it took the same old tired plot that Raphael-centric stories always rehash, but sent it spiraling into a totally different direction. Seeing Raph become the Shredder was sort of the apex of his characterization, with only lateral or downward directions for him to go afterward. Be that as it may, that doesn’t make this story arc any less entertaining.

And FINALLY, we get to see Splinter again. The “search for Splinter” was the driving force behind the Image Universe crossover arc, but inevitably got derailed thanks to all that nonsense with Deathwatch. Though his “just happening” to cross paths with Raph is one of those corny comic book serendipities, the sight of a more feral and out-of-his-gourd Splinter lashing out at what he perceives to be his greatest enemy made for a very exciting cliffhanger.

The stuff with Leo, Mike and cyborg-Don again suffered from Carlson’s insistence that the Turtles don’t care for each other like brothers in any meaningful capacity, as Leo first shows no interest in Don being injured, then very callously demands that they let his body die. I’m not saying that his decisions aren’t without just cause (the cyborg armor’s healing factor was shown to heal mortal injuries and the decision to let Don’s body die because his mind was no longer in it seemed like a measure to restore his brother a scrap of dignity), but that his manner of expressing them was so devoid of emotion or love that Leo rubs off as a complete and utter prick. The reasoning was sound but the delivery was botched and out of character.

But this was the 90s. Gore, action and oneliners beat pathos, drama and believable interactions every time.

On the bright side, however, the next issue advertisement was positively hilarious, continuing Volume 3’s nonstop barrage of Next Mutation and Venus DeMilo slander: 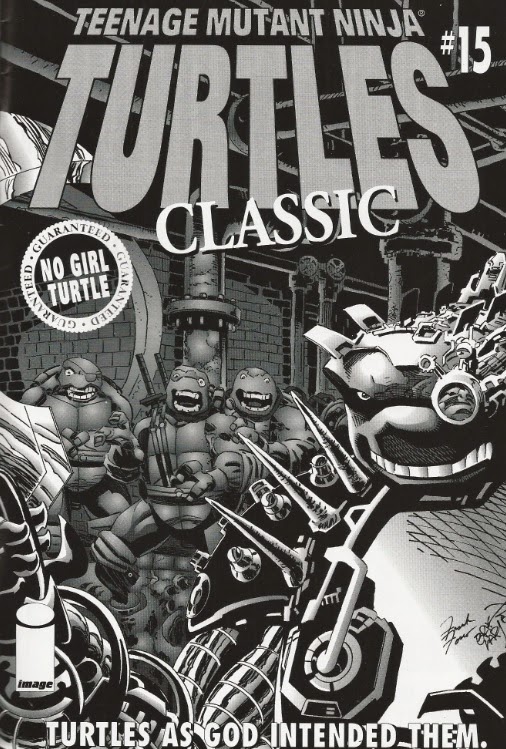 So it’s got that goin’ for it.