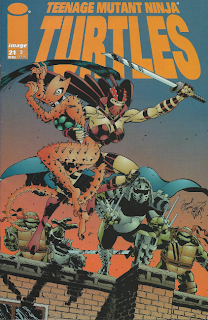 At the Museum of Natural History, Don succeeds in killing one of the Triceraton Commandos with his blaster, much to Horridus’s disapproval, as she wants answers on her alien origin from them. Hungry for answers, Horridus leaps onto the last Triceraton just as he pulls out his short-range teleportation device and vanishes, taking Horridus with him. Worried about Horridus (and what the S.O.S. will do when they find out he lost one of their members), Don jumps into his aircar and takes off for home. 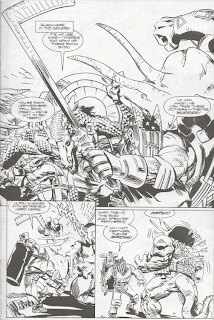 Down in the sewers, Mike, Casey and Leatherhead are up to their eyeballs in Triceraton Commandos, invading via Leatherhead’s transmat device. The battle looks hopeless until reinforcements arrive in the form of Leo, Raph (as the Shredder) and the Foot Clan! An all-out brawl commences as more and more Triceratons begin to appear through the transmat. Against Leatherhead’s wishes, Mikey swings his nunchaku and busts the machine, nearly electrocuting himself in the process.

Some minutes later, the victorious Turtles and Foot Clan take stock of the bodycount: three dead Foot Soldiers and fourteen dead Triceraton Commandos. Leo and Raph make amends, with Leo promising to tell Splinter of the good Raph did with the Foot Clan. As Mike comes to, Leatherhead apologizes for his rash behavior. With Doctor X’s help, they repair the transmat and teleport the Triceraton corpses back to the Republic Homeworld as a warning to keep away from Earth.

At the Jones’s apartment, April receives a phone call from Don, asking her if she knows where Splinter is. April heads downstairs to Mikey’s apartment and finds Splinter tied up with phone cord and unconscious. 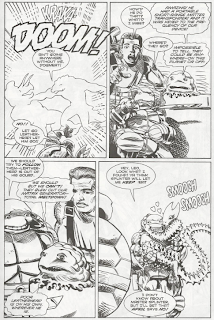 And back in the sewers, the Turtles finish zapping off the last of the Triceraton corpses when the Triceraton Commando from the museum teleports in with Horridus in tow. Leatherhead, at last completely succumbing to the deteriorating effects of his failing mutagen, goes completely feral and mauls the Commando, devouring him. The Commando activates his short range teleporter which combines with the transmat’s wavelength, teleporting him and Leatherhead out of the Milky Way and to parts unknown. Doctor X laments the predicament his friend is now in, as do Leo and Casey. Mike, however, is anything but melancholy, as he’s at last been reunited with his girlfriend, Horridus.

Above ground, Raph races across the rooftops toward the Foot’s headquarters at the abandoned theater. He thinks to himself how proud he is of the Foot Clan and the way they’ve turned out under his tutelage. Entering the theater, Raph suddenly finds himself besieged by a quartet of skilled ninja in silly helmets. With some effort, Raph takes them out, only to be approached and subdued by a pair of Japanese men. Having gained Raph’s attention, they introduce themselves as two of the five ruling council members of the Japanese branch of the Foot Clan. They reveal that they’ve been observing Raph for some time and, after seeing his skills against their hand-picked ninja, have at last accepted him as leader of New York’s branch of the Foot. Raph is honored, though he inquires where Karai has gone. The council members inform him that Karai had done something to lose face and has since been deposed as leader of Japan’s Foot Clan. 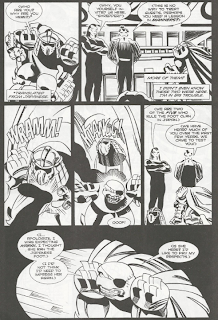 Unfortunately, there is bad news, too. Another has approached them with claim to both the New York Foot and the Shredder’s armor and Raph must defeat them to truly earn his place. It is, of course, Pimiko, daughter of Oroku Saki. She approaches Raph, flanked by the Shredder’s Elite Guard, whom she has gathered to take on Raph and the rest of the Turtles.

*Mikey establishes that this story takes place two years after their pact with the Foot Clan in TMNT (Vol. 1) #61.

*Mikey began romancing Sara ‘Horridus’ Hill in TMNT (Vol. 3) #10, and has been keeping up a correspondence with her ever since.

*The Palladium sourcebook “TMNT & Other Strangeness” claimed that the Japanese Foot were led by the Council of Eight (with the mysterious “Faceless One” at the top of the hierarchy). This issue contradicts that, revealing the Japanese Foot to be lead by a Council of Five. Granted, “TMNT & Other Strangeness”, despite being entrenched in the Mirage continuity in terms of inspiration, was an outside media source and much of its other background material was contradicted by later comic publications.

Beginning with this issue’s letters page, Carlson at last makes it clear that Image’s TMNT series would be ending due to low sales. Even reading the issues twelve years after the fact, it’s a terribly disheartening editorial alert to read, especially considering this book was getting really, really good.

But I’ll shed my tears for this volume’s untimely and unceremonious end when I review the last issue.

For now, we see the conclusion to the excellent Triceraton invasion arc. The fight scene seems to end as soon as it begins, but what we get is packed with all manner of stunning visuals provided by Frank Fosco. Volume 3 was not big on two-page splashes, so when I turned the page to find the huge “reinforcements” image, I couldn’t help but mutter “yes…” in pure satisfaction. It’s my opinion that two-page splashes are best used sparingly for purposes of impact (they lose their “epic” feel when applied once or twice per issue), so seeing Fosco break one out for this scene felt like a very special occasion indeed.

But the fight scene featured much more than what we usually get from Triceraton-themed stories; characters other than the Turtles fighting the Triceratons! When it comes to the Mirage comic continuity, the “street level” side of the series and the “outer space adventure” side avoid mixing whenever possible. They’re two aspects of the TMNT that are fundamental and bring their own unique and exciting elements to the story, but they aren’t exactly peanut butter and chocolate. Carlson bucks that trend with this story, and we get the Foot Clan (who arguably embody the “street level” side of the series) butting heads with the Triceratons (who arguably embody the “outer space adventure” side of the series), and it all comes together to marvelous effect. It was especially fun to see Casey going mano a mano with the space-dinos, breaking a hockey stick across one of the Commandos’ head. I always felt a little ripped-off with the second arc of TMNT (Vol. 2), where Casey joins the Turtles in freeing a group of imprisoned aliens from the Government (including a Triceraton), but only after receiving a “personality modification” from Mr. Bronze, to the point where he wasn’t really Casey at all. This story arc pleasantly makes up for that.

Leatherhead’s abandonment in outer space would be one of the unresolved elements of TMNT (Vol. 3) that would majorly annoy readers, especially fans of the big guy, as they pondered his well-being for twelve years. The “degenerating mutagen” plot thread and how it might relate to the Turtles would also go unaddressed, and you can tell Carlson was sewing some potentially interesting seeds with that.

Last but not least, we’ve got more Foot Clan intrigue to bite into. The Japanese branch of the Foot finally steps in and has their say, though perhaps disappointingly, Karai remains MIA. It was very satisfying to see Raph get his due credit for rebuilding the New York Foot and I was especially pleased with the bit where he speaks Japanese (I always felt that Splinter would have taught it to them as part of their studies).

Memories of Image’s TMNT volume are often dominated by the Shredder-Raph story arc, which isn’t exactly unfair, as it was one of the most striking and avant-guard elements of the book. Reading through the volume, however, fans are often a bit disappointed that it didn’t come to fruition until just under the last half of the series, first requiring readers to slog through the title’s two worst story arcs. Even worse, the volume ended just as the plot thread was really gaining steam.

One of those great wastes of comic book potential that we’ll never get back, I'm afraid, but hey, we’ve still got two more issues to enjoy!

Grade: A (as in, “And someone in the letters page actually asks if Horridus is retarded. And I don’t blame them”.)