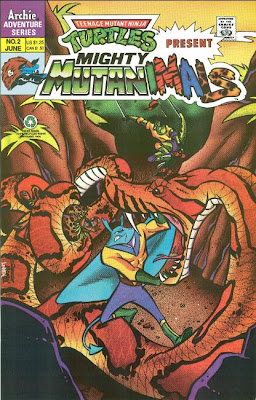 Summary:
In the South American rain forest, the Mutanimals follow a trail of rattlesnake talismans left behind, leading them toward the Path of the Serpent. Making small talk, Mondo Gecko asks Wingnut and Screwloose why they’re both so standoffish, leaving Screwloose to angrily reply that they’re friends and that should be good enough. Apologizing, Mondo brings them up to speed on their current mission, to follow the trail of Jagwar’s missing mother, Juntarra, and save her from the mysterious skull-faced fiend who has captured her.

Leaving behind the bulldozers and construction vehicles of Man’s world, the Mutanimals journey deeper into the heart of the rain forest. At last, they reach their first destination: the South Wind, AKA the Path of the Serpent. Suddenly, a humongous snake bursts out of the cave entrance and attacks. The Mutanimals rally together to defeat it, but in the battle, the snake destroys Wingnut’s prosthetic wings (emotionally crippling the poor guy). Leatherhead and Man Ray get a bright idea and, using their super strength, tie the creature in knots. The Mutanimals then escape into the cave. 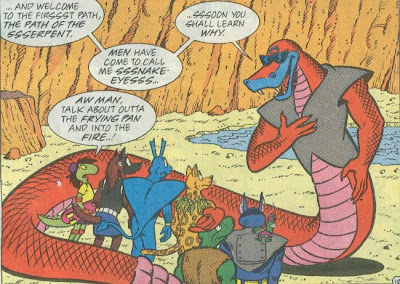 Coming out the other end of the tunnel, they are met with a shade and vest-wearing anthropomorphic serpent-man named Snake-Eyes. As the representative of the Path of the Serpent, his challenge requires those who seek him to face their pasts and shed them like the skin of a snake. Using his hypnotic gaze, Snake-Eyes freezes the Mutanimals and decides to make Wingnut face his inner demons first. Wingnut remembers his childhood on his homeworld, Huanu. His wings were small and crippled and he couldn’t fly. However, this handicap led him to his best friend, Screwloose, who also couldn’t fly. The two then decided to pool their allowances until Wingnut could afford prosthetic wings that he could use to travel (and Screwloose could use for rides). Sadly, Wingnut’s next memory is far more tragic, as he relives the destruction of his planet and race at the hands of Krang. 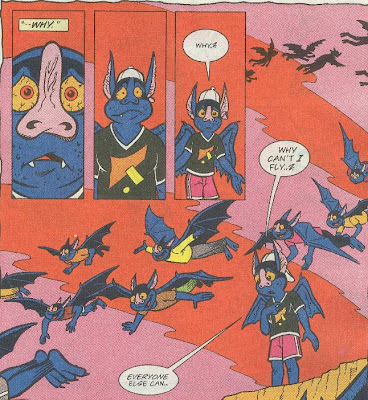 Enraged that Sake-Eyes would make Wingnut relive such horror, Screwloose forces the serpent to gaze at his own reflection in a pool of water. Hypnotized, Snake-Eyes is forced to recall a rather unfortunate moment from his own past… when he tricked Eve into eating an apple from the Tree of Knowledge. 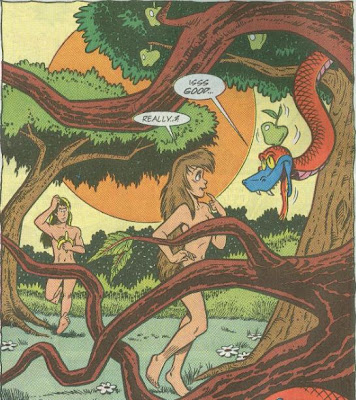 Later, the Mutanimals relax over a campfire. Wingnut feels relieved, having faced his past. Screwloose suddenly realizes that Snake-Eyes was actually trying to help them all and that his brash actions foiled their chances at emotional bliss. The Mutanimals forgive him, though, as he was acting in what he thought was his friends' best interests. Jagwar, meanwhile, can think only of his poor missing mother.

In the desert, an eagle follows as the grim reaper carts Juntarra into the mouth of a giant skull.

*According to the letters page, the character of Man Ray appeared in TMNT Adventures #5 before any development was done on his Playmates action figure. When it was decided to give him a toy, legal issues regarding the trademark of the name “Man Ray” interfered, thus resulting in Playmates having to change his name to “Ray Fillet” for the product. Mystery solved!


Review:
Character development continues, as Wingnut and Screwloose (who weren’t given much of a spotlight in the premier issue of the ongoing) get a heavy focus in this story.

I haven’t much to say about the giant snake battle or the journey through the rain forest, as they’re fairly typical and unremarkable, but the three page flashback to Wingnut’s childhood was something of a highlight. It’s silly, sure, as Ho draws him with a baseball cap and a jersey, but it’s sweet all the same.

The gag regarding Snake-Eyes’ origin was pretty clever and took me by surprise.

...Also, I assure you that Dreadmon was in this issue. He just doesn’t do anything.

Wow, what a lousy review. That’s not to say this was a lousy issue, but that in its 24 pages it doesn’t really do anything exciting enough to talk about, at least in any sort of depth. Though I will say I got a brief chuckle out of Mondo Gecko seemingly recognizing the inherent grossness in Juntarra getting her freak on with a jaguar as he describes Juntarra’s history to Wingnut and Screwloose, “…West to the Jaguar (where she had Jagwar – don’t ask)”.

All in all, it’s just a sort of average issue, though the mystery behind Juntarra’s kidnapping and the race to rescue her is more than enough suspense to keep me coming back for more.

Grade: C- (as in, “Come on now, Mondo, nobody can skateboard through a jungle…”)