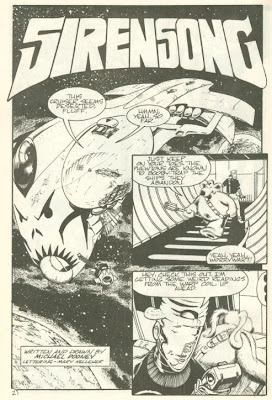 As part of a freelance “debugging” team, Gizmo and Fluffy are working their way through an abandoned Phewton dreadnaught, clearing away any booby-traps the previous owners may have left behind. Easily taking care of a few minor inconveniences, Gizmo and Fluffy begin to let their guard down, and of course that’s when a shapely lady roundhouse kicks them both in the head. 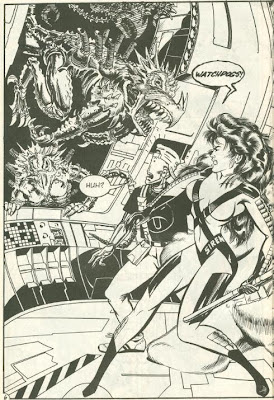 The lady is Siren, their boss in the debugging operation, and she doesn’t appreciate her employees getting cocky on such a dangerous job. Gizmo and Fluffy are happy to brush off her paranoia, at least until a horde of monstrous “Watchdogs” spring out of a hatch and attack. The trio dispatch the monsters with a splash page and proceed to the next booby-trap: a tripwire-activated explosive which Gizmo expertly trips over and explodes.

Siren helps the badly singed Gizmo to his feet, congratulating him on his excellent job debugging the dreadnaught. And there’s even better news: only five more to go! Gizmo moans in agony.

*“Sirensong” would be the last Gizmo story for ten years; Gizmo and Fluffy not appearing again until 2002’s TMNT (Vol. 4) #6, in the back-up story “A Few Small Repairs”.

Opening appropriately enough with Gizmo announcing “We’re Back”, this happens to be the first Gizmo comic in three years and would be the last for a whopping ten. Dooney brings his absolute A-game with this one boasting some expertly detailed hi-tech equipment aboard the dreadnaught, some sweet monsters (that look like a cross between the Xenomorphs from “Alien” and a styracosaurus) and Dooney’s favorite thing to draw: curvy ladies.

The titular Siren suffers from the usual problem with Dooney girls, in that they all tend to look very much the same (and her outfit is ridiculous), but she gains an edge by being very expressive and posing in ways that compliment the flow of the story, not the reader’s orgasm. I can’t tell you how many comic book artists who specialize in “sexy women” are only capable of drawing dull-faced pin-ups, with no idea how to set-up action outside of thrusting and hip-swaying, and even less of a grasp on facial expressions that don’t involve bedroom eyes and pouty lips. So with that in mind, though Dooney’s ladies do tend to fall victim to a template, his professional qualities as an artist more than make up for that.

One small detail throughout this comic I really enjoyed was Gizmo’s hat. Depending on his attitude or the action involved in the panel, it goes from bill forward, to bill backward, to having the bill flipped up Fresh Prince-style. It’s just a neat little detail that goes a long way in giving Gizmo extra personality.

Fluffy isn’t given a whole lot to do in this story, unfortunately, though he does get to bash some heads alongside Siren in the two-page spread (Gizmo, apparently, stays out of that fracas, leaving the fighting to the trained and armed individuals; another nice detail). Though he’s a bit like baggage in this story, Fluffy will take a more active role in the next comic.