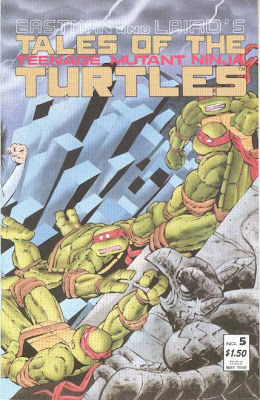 Frontispiece: Standing on a cliff, “Super Turtle” explains that superheroes aren’t just fiction, but reality. He then reminisces about the time he and his brothers were living in New York City and encountered one…

It is July in Manhattan and everyone is miserable in the heat save a lone, hideous figure. Disguised in a trench coat, he recalls his origins; how, while working at a construction site, a bolt of lightning struck him, transforming him into a powerful, evil figure named Complete Carnage. He later learned that the same bolt of lightning struck a girl jogging in the park, granting her powers, though for the side of good, transforming her into Radical. The pair fought many times; their last battle seeing him chucked by Radical to the North Pole. Luckily, he bounced off a 747 and landed in a temple of Zentaoists, who took him in under the belief he was a prophet. The monks trained him and, in time, Carnage learned the ability to absorb himself into any manmade construction material and to steal the energy and strength from those materials. Upon demolishing the Zentaoist temple, he decided he was finally ready to face Radical again. 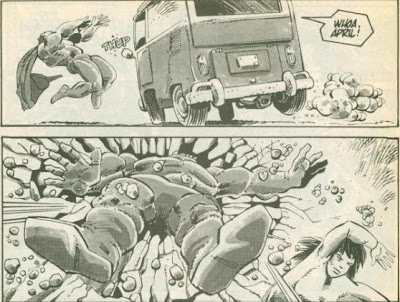 While driving through the city in April’s VW, April and the Turtles nearly run down a female bicycle courier. Suddenly, the cyclist is thrown from her bike by Complete Carnage, rising from the asphalt. The cyclist transforms into Radical and the enemies do battle. April insists that the Turtles should help, but Raph recalls his last encounter with Radical and remarks that she can handle herself. Unfortunately, Carnage has the heroine on the ropes, so April decides to take matters into her own hands by ramming the villain through a brick wall with her vehicle. Alas, it barely fazes Carnage, who knocks Radical out and leaps away with her, swearing vengeance upon the “meddlers”. Raph tells April to give chase.

Later, at Dooney’s Construction Products, Carnage has Radical tied up in a box. He reveals that, with his power to sap energy from manmade materials, if he encases Radical in concrete and then drains the block of its power, he’ll gain Radical’s powers, too.

Suddenly, the Turtles enter the scene and take Carnage by surprise. Leo frees Radical, but despite her powers, she can’t get Carnage to stay still as he fades in and out of the surroundings. Taking Radical by surprise, Carnage attempts to snap her neck. A poor move, as Radical effortlessly rips off his arm. Unable to reabsorb it unless it touches a manmade object, Carnage cuts his losses and flees into the city. 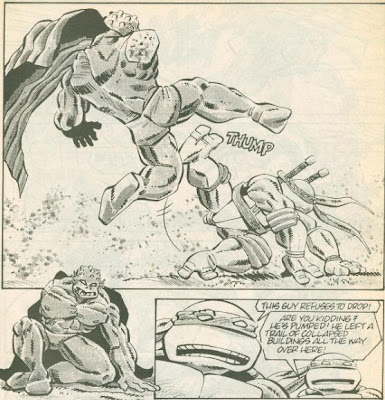 In Central Park, Radical dumps the arm in a bush where Carnage can’t reabsorb it. Standing out in the open, she draws Carnage into the park. It’s all a trick, however, as the TMNT ambush him. The battle wanes on, with Carnage refusing to drop. No choice left, Radical unleashes her Particle Beam, blowing the concrete villain to pieces. Alas, Radical is gone, too; the Particle Beam being a one-off ability that disintegrated her in the process.

Remarking that Radical died with honor, and not sure of Complete Carnage’s regenerative powers, the Turtles decide to gather up the pebbles and mail each one individually to people across the US as “pieces of the Big Apple”. What the Turtles don’t see, however, is a disembodied concrete arm desperately trying to hitchhike across the country.

*The Turtles will meet Complete Carnage and Radical again in TMNT (Vol. 1) #27.

*This issue also contained a bonus pin-up of Complete Carnage and Radical by Kevin Eastman and Eric Talbot and a bonus 1-page comic, “Buy TMNT 16 or we Die” by Mark Martin.

*“Dooney Concrete Products” is, of course, a reference to Mirage staffer Michael Dooney.

*CHET ALERT: One of the Complete Carnage chips is mailed to a “Chet Manly”. The name “Chet” was an in-joke hidden in numerous Mirage TMNT comics as… they just liked that name!

Eastman and Laird (well, at least Laird) have said time and again that they always wanted the Turtles to coexist in a world of superheroes, so Complete Carnage and Radical just happen to be two of the many super beings populating their universe. The pair seemed to be implementing this idea pretty hardcore around 1987-88, as Tales of the TMNT (Vol. 1) #2, Tales of the TMNT (Vol. 1) #5 and TMNT (Vol. 1) #15 all came out at that time and all dealt with the Turtles encountering superheroes and villains. I imagine for TMNT readers at the time, it probably felt a bit overbearing.

Complete Carnage and Radical are two recurring characters in the TMNT series that take their time becoming… interesting. This, their second appearance, focuses on them to the near-exclusion of the Turtles-themselves, who (aside from a quick rescue) contribute next to nothing to the actual battle with Complete Carnage and are just sort of tagging along. Radical receives hardly any dialogue, and despite appearing somewhat standoffish, has no personality to speak of whatsoever. Complete Carnage exists solely to exposit his origin whilst giving no motivations for going from “normal guy to eeeeevvvviiilllll” for us to dig into.

The characters are just very, very shallow. And so is the plot.

Ryan Brown leaves their origin open for expansion in future appearances, which may be “neat” in the long run, but it sure doesn’t make this particular issue any more interesting. Amusingly, while the first explanation of where their powers came from relayed via the Palladium RPG sourcebook, “Transdimensional TMNT”, takes a completely sci-fi approach to their powers, their “proper” origin as later relayed via the comics is entirely supernatural in nature.

Still, this issue isn’t entirely devoid of merit if my review is coming across that way. Lawson's pencils are detailed, dynamic, expressive and fun, and while the layouts could probably use some work (there’s a lot of empty white space on a few pages), this really is one of the best artistic runs for the Turtles.

Radical’s retro-80s hair is awful, though. But I can’t blame the gag-inducing stylistic trends of the decade on the artist.

This issue also contained two preview pages for Tales of the TMNT (Vol. 1) #6; one being a cropped version of Lawson’s cover with a dialogue bubble added to it, the other being a really cool and creepy pin-up of Leatherhead lurking in a sewer tunnel (artist un-credited). There are lots of other ads for Mirage comics and products, but to go off on a tangent, one of the things I really love about these vintage Mirage ads is that they almost all contain original art rather than just plain-Jane copies of the next issue covers. Even the ad that’s the next issue cover art is cropped differently and features dialogue bubbles. It always made the advertisements as fun to enjoy as the rest of the art in the book and, from a marketing standpoint, a great tactic, too, as the readers were less inclined to skip them.

Amusing ending gag notwithstanding, “Complete Carnage and Radical” is just a ho-hum issue complemented by some good artwork. Two appearances down and the guest characters are still entirely two-dimensional. Thankfully, they’ll get some much-needed fleshing out by their next appearance, but that’s a ways off.