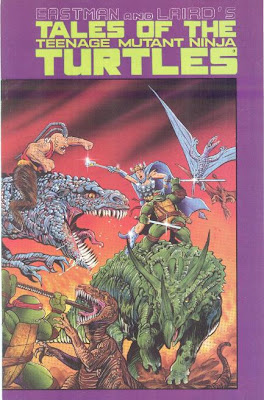 “The Return of Savanti Romero!”

Frontispiece: A Turtle riding atop a triceratops contemplates how the dinosaurs went extinct. Though he doesn’t know the answer, he does have a fairly interesting story to tell…

At the Natural History Museum, April, Mike and Don are enjoying an exhibit of fossilized dinosaurs when suddenly one of the fossils comes to life! Forming the skull of Savanti Romero, speaking to them from across time, the sorcerer swears vengeance on the Turtles, the Timestress and the Aardvark. He challenges the Turtles to meet him in “The Ring of Fire” before vanishing. Back at April’s place, the Turtles consider where in the actual geographical Ring of Fire they should go in order to meet Savanti. Suddenly, Renet appears in the living room, happy as ever to see them. Apparantly, Lord Simultaneous knew of Savanti’s threat and sent her to deal with it as a final exam for her Timestress apprenticeship. The Turtles sigh and follow her back in time to the Cretaceous period. 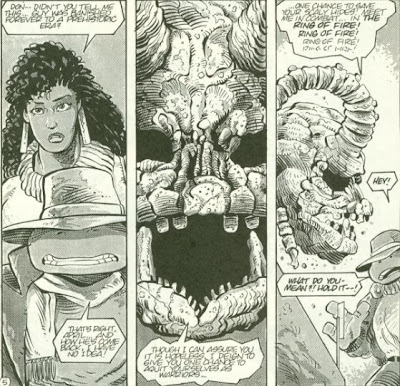 No sooner do they arrive, they are besieged by carnivorous deinonychus on one side and Savanti Romero riding a tyrannosaurus on the other! Raph leaps on the t-rex’s flank and begins stabbing him, while Leo grabs Renet and hops onto a nearby triceratops. As Mikey and Don deal with the deinonychus, Leo causes the triceratops to impale and kill the t-rex. Savanti continues undaunted, calling a pteranodon down from the sky. The pteranodon snatches up Renet and her New Sacred Digital Sands of Time Sceptre and then escapes with Savanti. With nothing else to do, the Turtles carve a swath through the jungle, following the dino’s path. 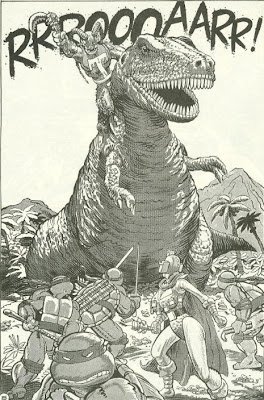 Two hours pass and they find themselves at a lake. Across it are two massive crisscrossing arches made entirely from dinosaur bones. The Turtles deduce that Savanti and Renet must be at the top and begin their climb. They reach the top and find Renet shackled in the center of the intersect point with the Time Sceptre poised just above her. Savanti reveals that in ten minutes a bolt of cosmic energy will come streaking down from the sky, where it will hit the Time Sceptre and incinerate Renet. Once it does that, it will set off the Earth's Ring of Fire, releasing magma from the Earth’s core and slowing the planet’s rotation around the sun just enough to cause it to miss colliding with the asteroid that wiped out the dinosaurs. And thus, the Turtles and all life as we know it will cease to exist. 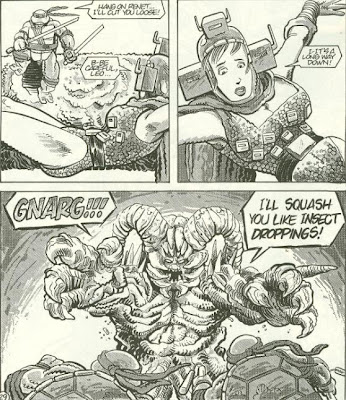 Exposition complete, Savanti creates a magical armor of bones and attacks the Turtles. As Don, Raph and Mike keep Savanti busy, Leo frees Renet and then makes a move for the Time Sceptre. Savanti spots him and lunges to reach the Sceptre first. It was all a ruse, however, as Leo leaps to safety just as the bolt of cosmic energy strikes the Time Sceptre and Savanti with it. Frying Savanti and his bone armor, the sorcerer plummets from the arch and sinks to the bottom of the lake. With him gone, however, the magic holding the arches up disappears and the structure begins to collapse. The Turtles and Renet make it to terra firma in time, but to the grim realization that they’re all trapped in the Cretaceous.

Three months later, the Turtles and Renet prepare their dinner; a humongous fish. Gutting it, Mike discovers the contents of its stomach to be both shocking and convenient: the fish swallowed the Time Sceptre! They’re all ecstatic at the thought of going home, but first they’re going to eat their fish.

*The Turtles, Cerebus the Aardvark and Renet defeated Savanti Romero, and Lord Simultaneous banished him to the Cretaceous in TMNT (Vol. 1) #8.

*This issue also featured a bonus pin-up, “Turtles in Hawaii” by Kevin Louis.

*Though the indicia mistakenly reads “August, 1989”, this issue actually came out in April of that year.

*According to Ryan Brown’s opening editorial, Tales of the TMNT (Vol. 1) was cancelled after this issue at the behest of Kevin Eastman and Peter Laird, who wanted to focus on a single TMNT title with the hopes of getting it out on a consistent monthly schedule (to give you an idea of how bad they were at releasing titles on time, the previous issue of Tales came out in August of 1988).

Savanti and Renet return as the original volume of Tales of the TMNT ends. However, I’m sure that back in 1989 everyone reading Mirage titles had just assumed Tales had already ended, considering this issue came out eight months late (Ryan Brown apparently lost the penciled pages amidst a pile of merchandising art awaiting approval on his desk). “If it’s not late, it’s not Mirage”. Heck of a motto, but not an inaccurate one.

TMNT (Vol. 1) #8 is one of my all-time favorite issues of Mirage’s original TMNT volume, so this sequel had a lot to live up to. In all respects, it’s a very good follow-up and just a heck of a lot of visual fun, as the Turtles are pitted against dinosaurs and monsters galore. Jim Lawson loves his dinosaurs, after all (check out his series “Paleo” for proof of that), and he really draws the heck out of the terrible thunder lizards in this story. Ryan Brown’s inking along with Steve Bissette’s and Eric Talbot’s toning do a great job in making the Cretaceous period look properly swampy and steamy (particularly for the two-page spread on 11-12).

Renet’s still an airhead and Savanti’s still a bumbling oaf, which is probably why I love those two so much. They’re these two incompetent dunderheads who just so happen to each wield some of the greatest powers in the known multiverse, and that’s far more frightening than if either of them had a brain cell to share between them.

Though I approve of it as part of her growth, Renet always sort of lost some of her appeal when she aged and got over her “Valley Girl” phase, while the rare “serious” take on Savanti Romero always struck me as missing the point of the character. In fact, my favorite moment in this entire issue is the interaction between Savanti and Renet from atop the arches, as Renet delivers some ridiculously clunky narration describing Savanti’s evil scheme, to which Savanti replies, “Why, thank you, Renet! I’m sure that’s the largest number of coherent sentences you’ve ever strung together!” Those two need their own sitcom yesterday.

The first volume of Tales of the TMNT features my favorite of all of Lawson’s different styles, though you can begin to see his aesthetic change some more with this final issue. He starts employing the “little black dots for eyes” thing that I honestly cannot stand, though it’s mercifully inconsistent. His April, on the other hand, actually looks really good even with that stupid '80s perm. This is one of the few times I’ve ever seen the classic-style Mirage April drawn in a manner that wasn’t repulsive.

Despite a luxurious 36 pages, “The Return of Savanti Romero” zooms by awfully quick, which may have been the fault of the numerous one and two-page splashes and spreads. Even so, it’s still a solid story and just as iconic to the returning duo of Renet and Savanti as their original appearance.