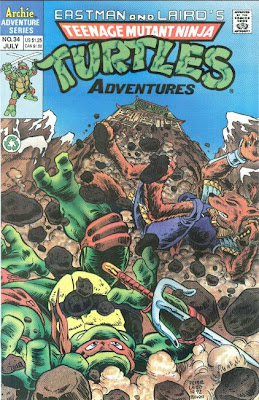 “The Search for the Charlie Llama”

At the Crystal Palace, the Turtles, Ninjara, Splinter and Katmandu are at a loss as to where the Skeleton-Dervish has taken off with the Charlie Llama. Their question is answered by a pregnant lady named Jang La, who has come to the Crystal Palace so that the Charlie Llama may act as a midwife for the imminent birth of her child. She points them to the direction of the temple of Mang-Thrasha, a sorcerer of great evil. They decide to journey to Mang-Thrasha’s digs to rescue the Llama, though Raph is hesitant about dealing with another all-powerful supernatural foe.

Suddenly, a group of Monk Monkeys (the Charlie Llama’s personal choir) step from out of the temple and greet the heroes. Splinter orders Don to stay with him and the Monk Monkeys to help Jang La give birth (as she’s now going into labor). Leo, Raph, Mike, Ninjara and Katmandu then leave to rescue the Llama. 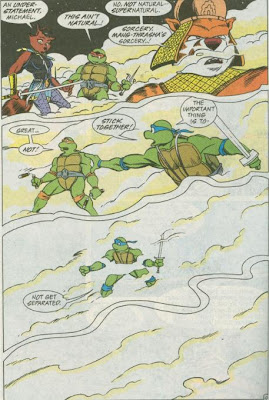 Approaching the base of the mountain where Mang-Thrasha’s temple sits, Katmandu tells his comrades to be watchful of the Chinese military. Ever since they invaded Tibet in the 1950s, they have been ever-vigilant to oppress the locals and suppress any potential uprisings. A supernatural mist then engulfs the group and Leo, Mike and Katmandu find themselves separated from Raph and Ninjara. Searching for their friends, Leo, Mike and Katmandu are attacked by a duo of Whirling Dervishes, but stop the villains with ease.

Elsewhere, Raph and Ninjara escape the mist and begin scaling the mountain, though Raph’s poor-footing causes an avalanche and sends them tumbling back the way they came. 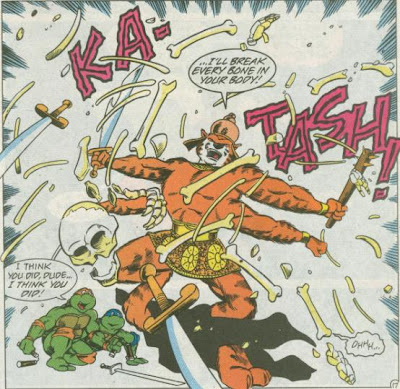 In the mist, the Skeleton-Dervish attacks but is quickly repelled by Katmandu, who “breaks every bone in his body”. The trio find their way into the front doors of the temple, only to be greeted by Mang-Thrasha and the well-armed Chinese military. Mang-Thrasha explains that the Charlie Llama has become too powerful in the hearts of Tibetan Buddhists, who seek his spiritual guidance. The Chinese military views him as a threat and wish to publically force him to renounce his claim as the reincarnation of Buddha, thus crippling the spiritual hope of the Tibetan people, making them easier for the Chinese to rule.

Suddenly, Raph and Ninjara come crashing through the window and take the guards by surprise. As Leo and Mike join in the fray, Katmandu sees to the Charlie Llama’s comfort. As the Llama lays down, he asks if Jang La is safe at the Crystal Palace. Knowing that she is, he reminds Katmandu that there are no ends, merely new beginnings and peacefully passes away.

Back at the Crystal Palace, Jang La successfully gives birth to a healthy baby.

The Turtles, Ninjara and Katmandu return to the Crystal Palace with the body of the Charlie Llama and he is burned on a funeral pyre. Ninjara says she’s sorry that Splinter traveled all the way to Tibet to be reunited with his spiritual leader, only to miss the chance. Splinter reminds her that the Charlie Llama is the reincarnation of Buddha and exists in a cycle of death and rebirth. Pointing at Jang La’s child, he says that he will simply have to return later so that he can get to know the Charlie Llama again when he’s a little older.

*According to Mutant Universe Sourcebook #1, after this issue Katmandu took up the charge of protecting Jang La's infant son, the reincarnated Buddha and next Charlie Llama. He'll appear again, though, in TMNT Adventures #53.

*Though they are referred to as the "Monk Monkeys" in this issue, the Mutant Universe Sourcebook #2 identifies them as the "Tantric Monkeys".

*This issue was published in the UK by Fleetway in TMHT Adventures #68.

The second half to the Charlie Llama arc leaves some conflicting emotions in me. The story of the Charlie Llama and the lesson it gives about Buddhist beliefs and practices is very touching and tasteful. Not enough media these days makes an effort to teach kids about foreign cultures beyond their stereotypes. Any given cartoon that features Buddhists will undoubtedly cast them as kung-fu monks, to the point where Buddhism has become synonymous with martial arts violence rather than peace and zen. A comic like this, which shows the other side of the coin, doesn’t come along very often and should be singled out for praise.

I’m not saying I agree with the things the Chinese military have done, especially to Tibet, but belittling them like this degrades us all and is behavior far beneath someone like Dean Clarrain (Steve Murphy). Murphy regularly used TMNT Adventures as a platform for his progressive viewpoints, but boiling an entire people down to the oldest and most ignorant stereotypes whilst having the protagonists make sorry ethnic jokes at their expense seems counterproductive and shows a clear bias on Murphy’s part.

He goes out of his way to educate the audience on certain cultures whilst reinforcing the worst stereotypes of others.

The art, inking and coloring is back on top with this issue. With Brian Thomas taking inking duties away from Ollerenshaw, the ugly wrinkles on the corners of everyone’s mouths disappear, leaving me with the impression that those were his doing in the previous issue and not Allan’s. Speaking of whom, Chris Allan is in perfect form, with this being one of the best showcases for his skill at expressive character work. While it’s easy to miss it in the main cast, as they’re always talking and engaging in fight sequences to distract you, the wholly mellow Monk Monkeys communicate only through body language and facial expressions, trading lots of subtle, sly looks back and forth.

So as you can see, my confliction comes not from the art but from the story, or at least the execution of it. I want to compliment Murphy on his depiction of Buddhist and Tibetan culture that kids normally would never learn about from television or mainstream comics, but I can’t abide his highly stereotypical villainizing of the Chinese. If Mang-Thrasha hadn’t been a Fu Manchu clone and Leo’s entirely out-of-character “fortune cookie” jab had not been present, I probably wouldn’t have cared. But they are and that brings the whole story down to a level where it really never should have sunk.

Grade: C- (as in, “Can somebody please educate Murphy that fortune cookies are actually an invention of Americanized Chinese food takeout and not a cultural standard of actual Chinese cuisine?”)