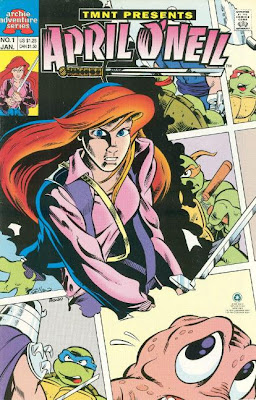 At news station WRTL, April’s boss, Murdoch Maxwell, is aggressively firing her for taking an extended leave of absence. April storms out of the office and begins packing her things. Her coworkers and friends, Linda and Malcolm, see her off. Sitting on the subway, April considers how the morning had been going so well… 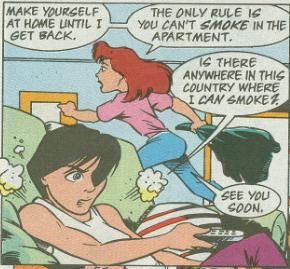 That morning, April and Oyuki stop by Chinatown to drop off Chi Hsi and Fu Sheng (the latter of whom is pleased to see his curio shop and most of Chinatown nearing the end of their repairs). April gives Chu a kiss goodbye and then piles back into the cab with Oyuki (who desperately wants a cigarette). Arriving at her dusty, cobwebbed apartment, April tells Oyuki that if she plans to be her roomie, the one rule is No Smoking. April turns on her answering machine to see what she’d missed during her trip to Japan and, in-between dozens of messages from potential suitors whom she has zero interest in, are an increasingly angry string of messages from Murdoch. April decides to rush to WRTL to try and straighten things out with her boss. 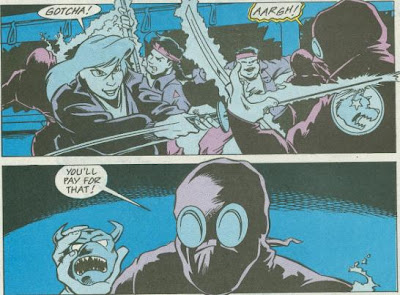 While riding the subway train, the car suddenly stops and the lights go out. A group of ninja wielding mystical weaponry called the Dog Star Gang swarm the car, attacking a Chinese gang known as the Golden Triangle who are also passengers. April ushers an old lady out of the car, but a smoke bomb thrown by a Dog Star causes everyone but the ninja to move in slow-motion (as well as neutralizing the Golden Triangle’s guns). April throws a loose shuriken at a Dog Star, causing him to drop his glowing sword. Losing the sword makes him slow down, too, and April realizes the weapons fight the effects of the smoke. Grabbing the fallen sword and speeding back up, April joins the fray. The Golden Triangles follow her lead and steal their own weapons to even the score. The Dog Stars then decide it is time to vanish and as they disappear, the effects of the smoke wear off.

The Golden Triangle pack leader thanks April for the assist, though she regrets having helped one of Chinatown’s most notoriously vicious street gangs. The Golden Triangle defends his lifestyle, saying that he protects Chinatown business owners from worse gangs like the Dog Stars (for a price, of course). As the power comes back on, the Golden Triangle snatches April’s sword and escapes into the tunnel. On his way out, he tells April that Wing Min owes her a favor. After explaining things to the cops, April finally makes it to MRTL and Murdoch’s office… 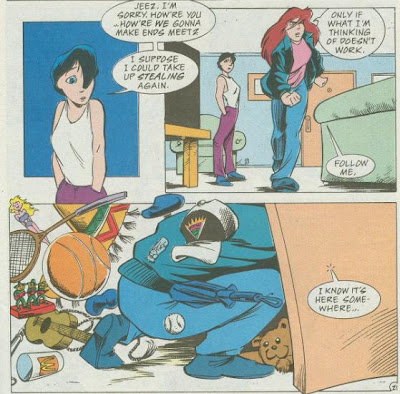 Back to the present, April sullenly arrives at her apartment. Oyuki panics to throw away her cigarette and tries to distract April with the news that Tattoo and Inky are in New York for an exhibition at Madison Square Garden. April isn’t fooled, but has bigger problems on her mind than the freshness of her drapes: How are they gonna pay the bills? April suddenly has a brainstorm and digs an old news camera out of her junk closet. She deputizes Oyuki as her camerawoman and tells them they’re going to do some freelance reporting on the Chinatown gang war! 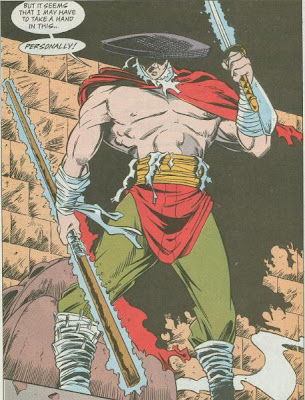 In a mysterious base, Wing Min approaches his shadowy master and relays the events of the subway fight with the Dog Stars. He presents the mystical weapons the Golden Triangles stole to his boss. The suitably evil-looking shirtless ninja-guy hoists the weapons in the air and decides to deal with the threat personally. 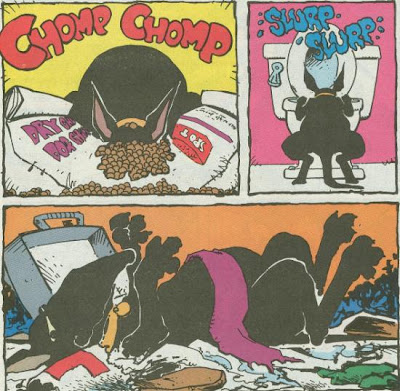 At their hotel in New York City, Tattoo orders Inky to stay out of trouble while he hits the city. As soon as Tattoo leaves, though, Inky immediately begins ransacking the hotel room. The joint destroyed, Inky climbs over to the window to give a good howl, only to fall from the ledge to certain doom…

*This story is continued from TMNT Adventures #33. The story continues in April O’Neil #2.

*April has a new (ex) boss in this issue named Murdoch Maxwell and a new station, WRTL. Her previous boss, Burne, was last seen in TMNT Adventures #3. A legal issue between Mirage Studios and Fred Wolf over rights to scripts from the animated series caused TMNT Adventures to switch from episode adaptations to original material after TMNT Adventures #4, which accounts for why the Channel 6 cast (and apparently the station-itself), so prominent in the cartoon, disappeared from the comic.

*Fu Sheng’s curio shop (and most of Chinatown) was destroyed in TMNT Adventures #20.

I know I’ve discussed this in an older review of mine, but I feel that this is a better place to repeat myself in even greater depth: TMNT Adventures has hands down the best incarnation of April O’Neil from any Turtle media. Let’s compare with her competition, shall we?

The original Mirage April, as I’ve noted in reviews for the Mirage comic, is just an awful character. After serving her original function of “human friend” and giving the Turtles a place to live for a couple years, she proceeds to do nothing of value ever again. And even during the years where she was their glorified landlord, she spent the time worrywarting over their safety and lamenting her own inability to do anything constructive, curling up in a fetal position and crying. And to top it all off, she was saddled with the most hideous of 80s perms: 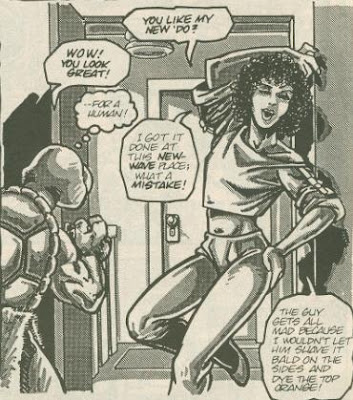 April from the Fred Wolf cartoon seemingly bucked the “useless” quality by becoming a TV news reporter, thus giving her a reason to involve herself in the dangerous and often idiotic adventures of the Ninja Turtles. Though fearless, she still spent the majority of the series as kidnapping fodder, acting as a damsel in distress episode after episode after episode (the TV movie “Turtles Forever” made pretty good light of this). And though her hair received an upgrade, her wardrobe notoriously did not: 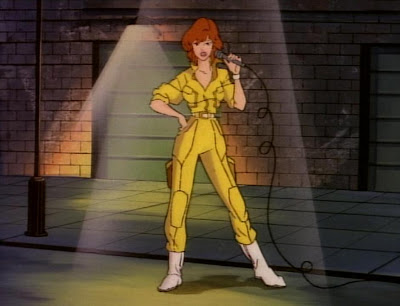 Then we have Movie April, who is basically just like Fred Wolf April except she now has the power to be played by a different actress every time you turn your head and look back. The fourth film, the CG-animated Imagi flick, decided to discard the old news reporter angle and make her a ninja (clad in a yellow outfit homaging “Kill Bill” in a pop culture reference that’s already outdated): 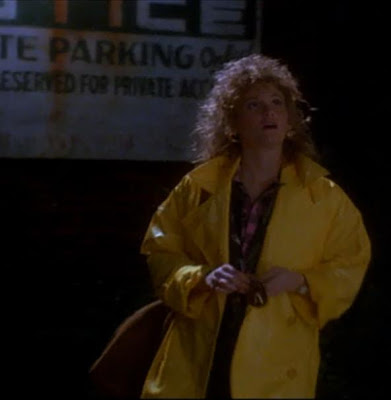 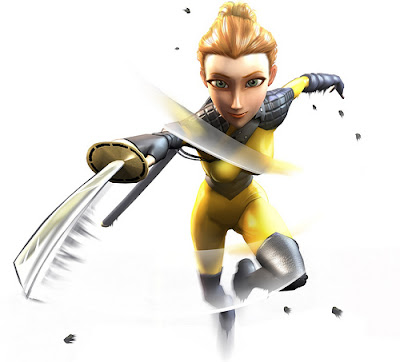 Then we come to April from the 4Kids animated series, who is probably the best version of the character next to Archie’s April. She starts out as a tech guru on par with Donatello before segueing into a ninja warrior. But like the 4th TMNT film, it makes her a kick butt lady at the expense of her having a job that gives her good reason to be involved in the Turtles’ activities (she isn’t a vigilante like Casey and doesn’t go out looking for trouble). I don’t even think she had a job outside the 2nd Time Around shop by the last half of the series. But hey, midriffs:

Archie’s April, while she began as just a clone of Fred Wolf’s April, quickly came into her own, retaining the better qualities of that April while gaining her own strong identity and characteristics. Long before Movie or 4Kids April became ninjas, Archie April was doing it first, having begun training with Master Splinter expressly so that she wouldn’t get captured all the time and so that she wouldn’t have to rely on the Turtles to save her over and over again. She got to keep her job as a reporter while learning skills that would help her protect herself instead of stupidly getting caught in traps and then counting the minutes until the male protagonists could get around to bothering with her.

That’s why I love the idea of April as a news reporter instead of a computer programmer or an antiques dealer. The occupation not only allows her to be involved in many of the TMNT’s adventures and thus stay relevant to the plot, but it allows her to have plenty of adventures on her own without the green guys, making her a more independent character worth latching onto.

And Chris Allan has easily the best design for her, too. No god-awful 80s perm, inexplicable yellow jumpsuit, skintight “Kill Bill” catsuit or needlessly sexualized plunging neckline or tube top. She’s pretty without being ridiculously or abnormally hot (like how Frank Fosco drew her in Image’s TMNT comic) and with a hair style that, though it may remind some of “The Little Mermaid”, looks good no matter what decade you’re in. Her wardrobe is stylish and functional, consisting of a t-shirt, jeans and optional black leather jacket (which, okay, may be the only dated element of her design) that complement her highly active occupation without looking stupid.

Archie’s April is just the best of all worlds. A lot of folks hate the idea of April as a reporter because “it’s from the stupid cartoon”, but TMNT Adventures is a great illustration of how that angle can be used to maximum benefit not only to the story but to the character of April O’Neil as well. In so many cases, April always drifts off into irrelevance after her introduction and April is a character who should never be irrelevant.

Onto the merits of this particular issue, it acts as a nice continuation of the “Midnight Sun” arc from TMNT Adventures, keeping elements and characters from that plot going while TMNT Adventures was off doing its own thing. The sudden switch from Channel 6 to WRTL on April’s part might be a little jarring for those who’ve been reading since TMNT Adventures was just adaptations of Fred Wolf episodes, but as I mentioned in the Turtle Tips, it was likely a matter of legal measures. While Mirage (and now Viacom) do own the characters of Burne, Vernon and Irma, in 1993 when the Fred Wolf cartoon was still going and tensions between Mirage and Fred Wolf were still hot, it was probably for the best not to push any buttons. In the end, she gets fired in the first page of this issue, anyway, so it doesn’t really matter all that much.

Chris Allan is great at drawing “cute” girls. His female characters are attractive without having to shove their anatomy in the reader’s face; being appealing in large part to their expressive features and dynamic body language. You wouldn’t believe how many forum posts I’ve read where male fans recall the April O’Neil miniseries for "how hot the girls were”, yet if you sit down and flip through it, you’ll find no cheesecake pin-ups or cheeky fanservice. I dare say those fanboys may have fallen in love with the characters because of their personalities. It’s sweet and creepy all at the same time.

Steve Sullivan writes the issue with guidance from Steve Murphy (Dean Clarrain). Since it’s a different writer than the usual, we’re spared any sort of personal political agenda aside from maybe a “no smoking” theme revolving around Oyuki, but even that is presented in a humorous way that works with the character instead of taking the audience out of the book. The “extended flashback” bit taking the narrative out of sequence seemed a little superlative, but it’s a typical device used to spice up what would otherwise be a pretty cut and dry plot (Mighty Mutanimals #7 used the exact same device a month later).

As for the back-up story, while I could care less about Tattoo, Inky is awesome. This would actually be the first series of Inky back-ups, and while I liked the second series that ran in TMNT Adventures a bit better, this one was still cute and fun. Eric Talbot, Inky’s (and Tattoo’s) creator, drew this strip and his manic style makes the pantomiming more exciting than it deserves to be. Still, it’s short and not really all that funny or gradable, just a cute little bonus.