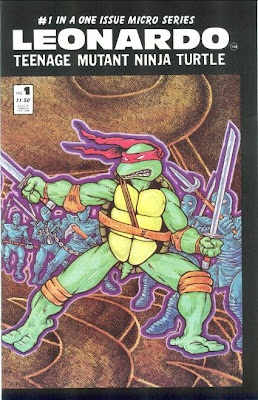 “What Goes Around… …Comes Around!”

It’s Christmas Eve, and as Mike and Splinter prepare dinner, April and Raph return home with the tree. While Don rigs the lights, Mike wonders where Leo has gotten off to. Raph explains that he went out for an exercise run and should be home shortly. 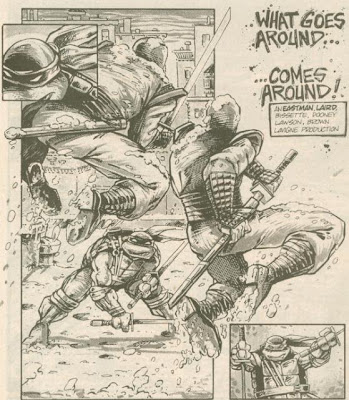 On the rooftops, Leo has run afoul of a horde of Foot Soldiers, who lay siege to him in endless numbers. The battle drags from the rooftops to the alleys, as no matter how many Foot Soldiers Leo defeats, more pop out of the woodwork to attack him.

Back at the apartment, Raph trims the tree with a pair of butterfly knives then leaves to grab his gifts to put under it. April and Don begin decorating the tree and singing carols I’ve never heard of. 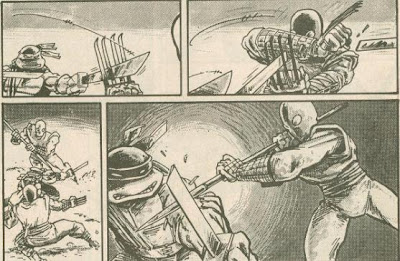 In the alley, a clawed Foot Soldier breaks one of Leo’s katana. Undeterred, Leo chases a remaining Foot Soldier right into an ambush from Foot bowmen! Leo ducks for cover as arrows fill the sky.

At April’s place, Raph notices that it’s beginning to snow pretty hard. He goes to the kitchen to ask Mike if he wants him to grab his gifts for the tree, too. Mike sees through Raph’s ploy and tells him to stay out of his room, as he hasn’t wrapped his gifts yet.

Leo peeks out from his hiding spot and finds the rooftop bowmen have vanished in the falling snow. He looks to the end of the alley and sees a cloaked figure run to the streets. Grabbing an old trench coat out of the garbage, Leo continues his pursuit into the open streets of Chinatown. He is instantly attacked by a pair of Foot Elite (those guys with the scarves and the fancy hats). Leo takes out one, terrifying bystanders who are nearly caught in the crossfire of their battle. Realizing his error, Leo runs back to the alleys. 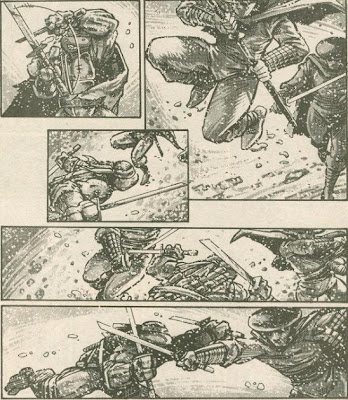 Meanwhile, Raph decides to sneak a peek at Mike’s presents anyway, hoping to see if Mike got him that RC car he wanted. As he opens the door to Mike’s room, however, he is pounced on by Klunk: Guard-Kitty Extraordinaire. Knowing when he’s beat, Raph decides to just grab his presents and get back to the living room.

Dodging shuriken, Leo finds himself cornered outside a construction site. Several Foot Soldiers wielding manriki-gussari manage to chain Leo to a wooden fence. Another Foot Soldier nails Leo with a jumpkick, sending him through the fence and tumbling down into the muddy floor of the construction zone. Now swordless, Leo wraps the chains around his fists as dozens and dozens of Foot Soldiers encircle him. The horde of Foot Soldiers part and a shadowy figure steps forth. 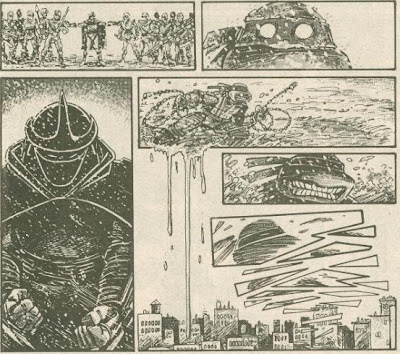 At April’s, Splinter has become worried that Leo has not yet returned home. Mike, Raph and Don concur and suit up to go hunt their brother down. They needn’t bother, as Leo’s badly beaten body comes crashing through the window. Falling into unconsciousness, Leo whispers the words, “He’s back… the Shredder…” 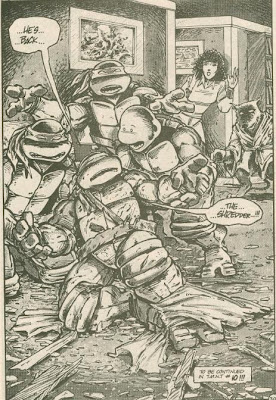 *This story is continued from Donatello (microseries) #1. The story continues in TMNT (Vol. 1) #10.

*Donatello describes this as being their “second real Christmas”. Their previous Christmas with April occurred in Michaelangelo (microseries) #1.

*Raph does a “Bill the Cat” impression for Klunk. Bill the Cat was a cartoon strip character created by Berkeley Breathed.

*Years later, Raphael will spiritually revisit the events of this issue in "A Christmas Carol".

*Leonardo will continue to be haunted by his defeat for years to come, as seen in “Ghosts of Christmas Past”.

*This issue also contained a bonus pin-up, “Training Exercises” by someone named Andy.

If any of you have ever read that article I wrote a few years back, “The 25 Greatest Moments in TMNT History”, then you no doubt know how this review is going to proceed. I voted this issue as the Number One greatest moment in all of Turtledom and I continue to stand by that conviction. To put it mildly, this issue is positively amazing.

From a storytelling standpoint, this issue makes ample use of everybody’s favorite $10 word: “juxtaposition” (pull that off in a Scrabble game and you’re set for life). There are two narratives going on simultaneously in this issue: Leo’s battle with the Foot and the Turtles and April having a wholesome family Christmas. Leo’s portion takes up about three quarters of each page, while the bits at April’s apartment are relegated to a one quarter-page strip at the bottom. The layout remains consistent for the duration of the entire issue up until the final splash page, when the two narratives collide. I love the way this was done. Most comics have dueling narratives, but the standard is to just pass back and forth between them from page to page, panel to panel. This “picture in picture” method makes it so that you never lose sight of either plot line as they occur simultaneously; heightening both the contrast of Leo’s life and death struggle with his brothers' cheerful festivities, and the suspense of the whole thing, as the Turtles wonder where their brother is while you see just a panel above that he’s getting completely trashed.

But more than just the page layout, I love how the entire running battle between Leo and the Foot is completely silent. No dialogue. No grunts. No sound effects. Just pure action. The grim determination in Leo’s struggle really shines in a way that witty banter, internal monologues, cheesy sound effects or stupid villainous threats would have ruined. This isn’t a game and this isn’t fun. The Foot Soldiers are completely focused on killing Leo and Leo is completely focused on making it out alive. Neither side has time for chitchat.

The lack of text, too, makes the artwork of this issue really stand out as it speaks entirely for itself. You can just sit there and stare at the pages, admiring how fantastic Kevin Eastman’s action layouts really are. There’s a simple moment where Leo chases a fleeing Foot Soldier down an alley. The Foot Soldier rounds a corner, Leo follows and then a panel later the Foot Soldier pops back around, hurling surprise shuriken that Leo instinctively deflects with his broken sword. It’s a short four-panel sequence, but it shows just how much highspeed energy is breathed into this issue. 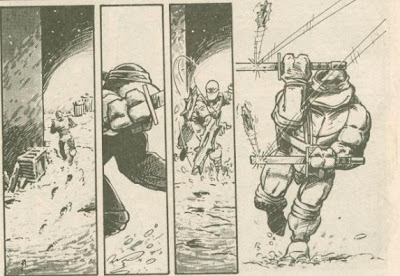 The sequences happening at April’s apartment lack the duo-tones and heavy inks of the Leonardo segments, making them brighter and more cheerful. All the Turtles’ have their personalities on display in their entirely mundane dialogue and actions. It’s fun to watch these characters just standing around, gabbing and going about their everyday motions, which works especially well as a set-up for the shocking cliffhanger (or at least it comes as a shock to them). And even though they aren’t doing anything exciting, there’s still a nice infusion of energy to the panels; I especially like Raph’s tree-trimming scene.

Of course, this issue also marks the triumphant return of the Shredder, who has been dead since the first issue (published two years before this one). As you Mirage fans may very well know, the Shredder was used extremely sparingly in these comics, with his legacy having more of an impact on the Turtles than he ever did firsthand. But when the Shredder does appear in this book, it is always for a suitably epic, unforgettable storyline. This two-parter is fantastic and I suppose it’s a bit unfair to try and pick which half is better. Just take the entire story as a whole, because both parts are amazing.

If you haven’t read a copy of Leonardo #1 yet, then I’d recommend you procure one for yourself as a priority. Moreso than perhaps any other issue of the series, this is a prime example of how good the Mirage Crew were at telling stories through a comic book medium.

Grade: A+ (as in, “And yeah, this is the very first appearance of the fearsome, unstoppable Foot Elite… and what do they do in their first panel ever? They hit Leo with snowballs”.)
Posted by TMNT Entity at 11:33 AM