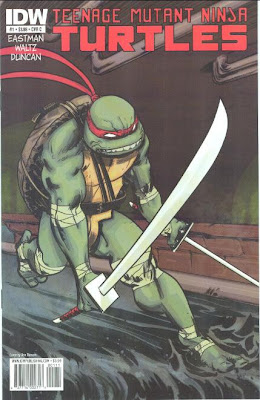 On an abandoned street in a bad part of New York, Splinter, Leonardo, Donatello and Michelangelo face-off against mutant cat and long-time foe of Splinter’s, Old Hob, and his gang of thugs. Splinter tries to talk Hob out of battle, but the feline is insistent on finally putting Splinter and his reptile sons in the ground. And so a fight breaks out, though Splinter orders the Turtles to refrain from killing. They make short work of the thugs, while Splinter brings down Hob. Swearing that Splinter and his sons will disappear “just like that other stinkin’ freak”, Hob escapes into the alleys. Hob’s words cut Splinter and the Turtles deep, as they remember Raphael, who is out somewhere, alone and destitute. 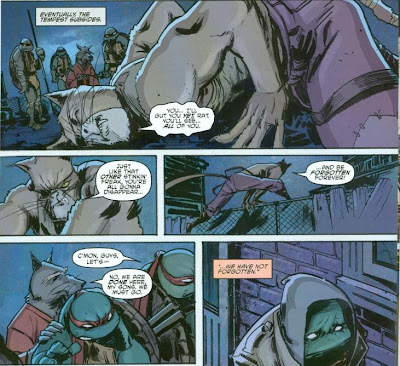 Eighteen months earlier, at the Stockgen Research lab, intern April O’Neil is being shown around the place by the nervous Chet. Chet introduces her to four turtles, which she immediately finds captivatingly adorable, as well as the pet lab rat, whom they let roam free because they can’t keep him locked in his cage (a notion that doesn’t sit well with the rat-hating April). 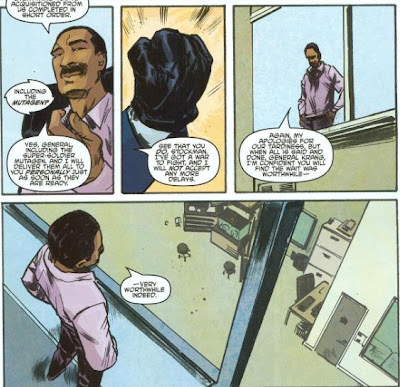 In the office of the lab’s owner, Baxter Stockman, the unscrupulous doctor gets a phone call from his benefactor, the enigmatic General Krang. Calling from his island fortress, and irritated at the distraction from the war he’s been waging, Krang demands to know why Stockman is past due on the results of his projects. Stockman assures him that progress in the terrapin/human exo-armor synthesis and rodentia psychotropic serum have only met with a minor delay. Likewise, the super-soldier mutagen is coming along swimmingly. Stockman promises to hand-deliver the results to Krang as soon as they’re ready. 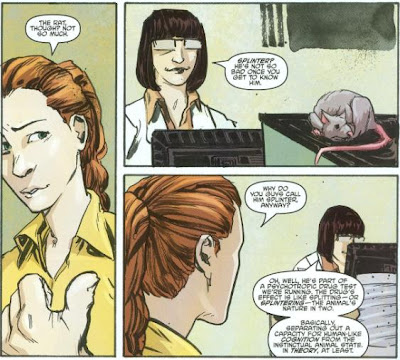 Three months later (so fifteen months ago), April asks the other lab assistant, Lindsey, why they named the rat “Splinter”. Lindsey explains that it’s a reference to the psychotropic drug they’re testing on him, which “splinters” the human-like cognition powers from the instinctual animal nature. April is livid at the idea of psychotropic drug tests, as she thought she was helping to engineer livestock to stop world hunger. Chet quickly distracts her by asking what she’s named the four turtles. April tells him that she was inspired by her History of Renaissance Art 101 class to name them Leonardo, Donatello, Michelangelo and Raphael. 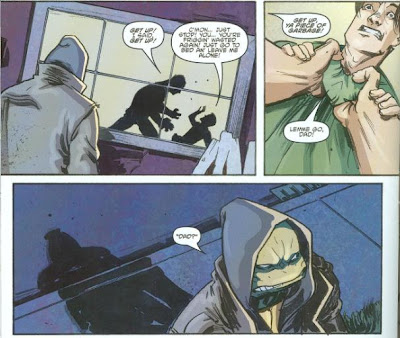 Speaking of Raphael, back in the present, Raph is busy climbing through dumpsters, eating discarded pizza crusts. Digging through suburban garbage for anything useful (finding only a tacky “Cowabunga” t-shirt), Raph hears the siren song of domestic abuse. He peeks through a window and sees a drunken father pummeling his teenage son, Casey. Not about to sit idly by, Raph breaks the front door down and barges in.

*"Chet" was also the name of the young boy who bought the turtles from a pet shop in the original Mirage comic book series.

*An ashcan edition was released a few weeks prior to TMNT (IDW) #1’s proper release as a promotional item containing 8 pages of the full issue.

*CHET ALERT: April’s boss at Stockgen Research is named Chet Allen. The name “Chet” was an in-joke used by the Mirage staff in several issues of the original series because… they just liked the name!

This is very exciting for me.

You see, I’ve never had the luxury of following a Teenage Mutant Ninja Turtles comic from month to month as it keeps a forward-moving narrative. I was an X-Men kid growing up, so my allowance in the 90s always went to the X-books at the newsstand, never any of Archie’s TMNT Adventures titles. I didn’t have a local comic shop back then, either, so the Mirage or Image titles were never available to me. By the time I finally got wise and started following TMNT Vol. 4, Laird put the book on indefinite hiatus (this was in 2006) and that was that. I did have the fortune of following Tales of the TMNT (Vol. 2) from beginning to end, but that was an anthology series that hopped all over the established Mirage timeline and offered very few chronological stories.

Honestly, this brand new series from IDW is the first monthly Ninja Turtles book with a story that moves forward I have ever followed. And I am giddy.

But that bit of stupid anecdotal nonsense aside, IDW’s TMNT #1 may not go down in history as the stuff of funny book legends like Mirage’s TMNT #1, but for long-term Turtle fans with open minds about the many incarnations of the franchise from the past twenty-five years, I think it’s gotten to a very intriguing start.

In the current comic book industry, “decompression” is the name of the game; seeing how many issues you can possibly spread a single plot over in order to wring the most money from the reader. So with contemporary trends in mind, TMNT #1 doesn’t offer a complete origin story for us, opting to deliver it in piecemeal and through leap-frogging flashbacks. So if you grabbed this issue off the rack for the modern (absurd) price of $4 bucks, expecting a complete story, then you may want to jump into your Delorean and travel back twenty years when comics still did that sorta thing. Here, author Tom Waltz uses this first issue to let all the various plot threads loose, to be sewn up as things move along.

Personally, I’m fine with the method of decompression so long as it isn’t employed to ridiculous extents (Donatello: The Brain Thief immediately comes to mind). And using a first issue simply as a means to open up a can of plot threads isn’t such a bad thing when those plot threads are genuinely intriguing and have me anxious for 30 days to go by.

How does Splinter know Old Hob? Does April know the Turtles are mutants? How did they mutate? Why is Raph a runaway? That’s Casey Jones at the end, right? Holy shit, did you say KRANG!?

All this and more and I wanna know allllll about it.

What pleases me most is that Waltz (and co-plotter Kevin Eastman, I guess) chose to open with “the story already in progress” so that we could get some Ninja Turtle action early on, giving us the first chunk of the origin via flashback. The alternative would have been to give us the whole origin from the very beginning and not have the mutated Turtles show up until the last page (spewing some trite cliffhanger dialogue, I’m sure), which is something a lot of comics do that I’m pretty well sick of. Hell, if Brian Michael Bendis had written this we wouldn’t see a single Ninja Turtle until issue #5. The execution of seeding the origin out throughout a current plotline is reminiscent of how the original TMNT (Vol. 1) #1 opened and is all the better for it.

To get back to my dumb anecdotes, I just want to admit that like many people my age, my introduction to the TMNT came from the Fred Wolf cartoon. I didn’t find out about the original comics until I was a teenager. So even though the Fred Wolf cartoon is a series that has not aged well at all and can be nearly impossible to endure 95% of the time, I still hold a firm grip on the characters and ideas born from it. I stand by the old adage that “there are no bad characters, just bad writers” (though not steadfastly, mind you), and while guys like Krang, Bebop and Rocksteady may have been silly and ineffectual in a syndicated children’s cartoon from 1987, that doesn’t mean they should be written off as “garbage” never to be used again. A good writer can take these characters, boil them down to their essential elements, deduce what makes them work and then implement them in a modern and intelligent manner.

I have absolutely no idea if Waltz is going to be doing that with “General Krang”, but I am psyched to find out if he does.

My point, though, is that I love the Fred Wolf/Archie/Playmates characters with all their stupid quirks and faults and I am ready to see them all again, rejuvenated by new writers with fresh ideas and modern storytelling skills. And I have money. Just… take it, IDW.

Dan Duncan’s artwork covers Kevin Eastman’s layouts and I do dig the guy’s style. He occasionally seems to interpret the TMNT’s trademarked sneer as a massive “overbite”, and especially so on the covers (where he’s received quite a bit of criticism), but it’s hardly a consistent thing and I never found it distracting in the interior art. His characters are very expressive, but most importantly, he’s capable of drawing both mutants and humans well. Much of the time, TMNT gets artists that are either/or and it shows. I suppose if I had one problem, it would be that he draws the Turtles with pupil-less eyes even when they aren’t wearing their bandanas. Now, yes, I know that the idea that their pupils magically vanish once they put a strip of fabric on their faces is nonsense, but Raph just looks creepy and weird with the white, milky eyes and no bandana. It’s a design aesthetic I’ve never seen an artist use on the Turtles before, which might be why it stood out to me.

Some of Eastman’s layouts are published in the back of the book under the “Ninja Notes” editorial/letters column. From what I can tell, there was some give and take between Eastman’s layouts and Duncan’s finished pencils. Eastman’s page 1 gave the towering skyscrapers some warping curvature that gave the opening shot a dynamic and bizarre touch, while Duncan went with just normal architecture that, while perfectly fine, doesn’t visually pop and grab you quite as well. On the other hand, Duncan improves on a lot of Splinter’s poses, as Eastman went with a rather bland “face-forward, snout-down” look. In the end, though, I like what Duncan’s done and he was definitely a good choice for the title.

Like a lot of modern comics that cost almost as much as your lunch, it reads very quickly and you may not feel like you got a whole lot of story for $4 bucks. These days, singles are really just for the hardcore fans that have to follow a monthly narrative as it progresses and don’t mind blowing the extra cash. With the economy the way it is and comic book prices steadily rising to ever-ridiculous heights, waiting for the trade has become the wiser option and one I’ve been selecting more frequently than ever before.

However, for Ninja Turtles, I make an exception. And with the interesting twists on the classic origin that Waltz and Eastman are going with, as well as cryptic glimpses of certain characters I never thought I’d see in a TMNT comic again, this is a book I absolutely have to follow every 30 days and I can tell from just the first issue. If Waltz, Eastman and IDW can keep this up, they’ve got my $4 bucks.