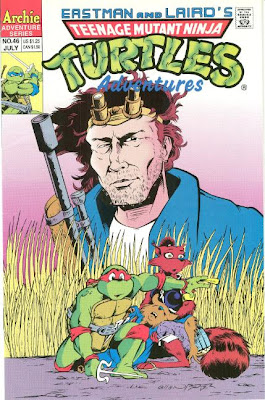 Down in the lair, Leo senses an approaching trespasser. The Turtles tackle the interloper who turns out to be a fox-guy. He introduces himself as Naga, the younger brother of Umeko… Ninjara. Mikey begins to tease Ninjara about her real name, at least until Ninjara twists his arm until he says uncle. Naga explains that a hunter has been eliminating the people of their village and has taken their grandmother captive. Raphael, however, is more interested in how Naga found their lair. Naga reveals that Ninjara sent him a detailed map with directions… a fact Raph is none too happy about. 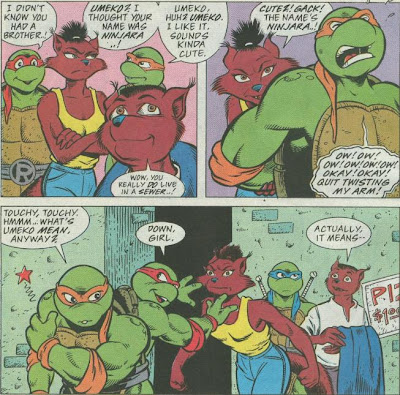 Suddenly, April appears on TV. She and Oyuki are covering a breaking story at West Central Park; a giant four-armed creature called Sarnath is tearing up the place. Leo, Don and Mike decide to go deal with Sarnath while Raph accompanies Ninjara and Naga back to Japan.

On the plane-ride there, Raph and Ninjara have a major quarrel (in the cargo bay of the airliner). Raph is furious that Ninjara gave away the location of their lair, while Ninjara thinks she shouldn’t have to apologize more than once.

Arriving in Japan many hours later, the trio hop in a small motorboat and head toward a small island shrouded in mist (which shields it from outsiders). Though the children Tetsuma and Akiro are happy to see Ninjara, the old crone Kyota isn’t as pleased. Refusing to let the others call her by her real name, she calls Ninjara an “outsider” and storms off. Ninjara’s old friend, Kenji, then greets her and invites the trio back to his burrow. Once there, he explains that the council of elders have forbidden rescue of her grandmother from the hunter. Kenji then changes the subject, asking Ninjara if perhaps they could reignite their old romance. Ninjara declines as she’s faithful to Raph. At the other end of the room, Naga tells Raph that Kenji is Ninjara’s old flame. Gripped with jealousy, Raph offers to take the “first watch” of the night (so he can keep an eye on Kenji).

The next morning, Naga takes them to the island where the hunter lives. Trudging through the forest, Ninjara is too blinded by trust in her brother and Raph is too blinded by drowsiness to realize that Naga is leading them into a trap. A net springs up around them and the pair become caught. As the hunter steps out, Naga explains that he cut a deal for his grandmother’s life; Rapahel’s in exchange for hers. Getting one look at the “attractive” Ninjara, the hunter decides to take her as part of the deal, too, and belts Naga with the butt of his rifle. He then tags Ninjara and Raph with darts, tranquilizing them. 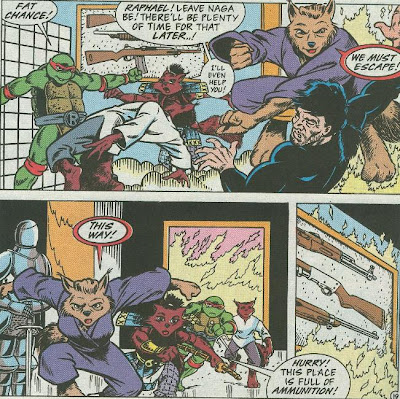 Ninjara and Raph eventually awaken in the Hunter’s trophy room. Ninjara’s grandmother manages to loosen her shackles and tackles the hunter, inadvertently knocking over a candelabra and setting the room ablaze. Naga frees Raph and Ninjara from their cage, but the infuriated Raph slugs him in the face for betraying them. As the flames creep toward a store of ammunition, Raph and the foxes escape out the back, finding themselves cornered at a cliff’s edge overlooking a deadly drop into the sea. As the mansion begins to explode, Ninjara’s grandmother says that they must use the nearest torri (traditional Japanese arched shrine built on cliff-sides) to open a gate to the underworld and escape there. They agree reluctantly and the old fox-woman chants an incantation to open the portal. As they escape, the hunter chases after them into Hell.

Down in the Underworld, they are all greeted by a “demon babe”, as Raph calls her (much to Ninjara’s disapproval). The demoness tells them that the only way out is to step back through the torri. The hunter is the first to try but merely steps through the arch and off the cliff, down into the black pits of Hell. The demon-babe then finishes the fine print: you must be pure of heart for the portal to open. Ninjara’s grandmother tells everyone to have no fear, clear their minds of all negative thoughts and simply stride through in peace. She does so successfully and Naga follows suit. Raph and Ninjara then turn to each other and Ninjara apologizes sincerely for giving away their lair’s location. Raph apologizes for being so hard on her, they hug and then walk successfully through the gate.

Arriving back on the island of the fox-people, Raph tells Naga he’s sorry for belting him in the snout and that there are no hard feelings over what he did. Naga nervously accepts the apology. Crisis over, Ninjara’s grandmother asks her granddaughter just what Raphael’s deal is.

*The ancient race of fox-people from which Ninjara belongs was referenced (but not shown beyond Ninjara) in TMNT Adventures #29.

*Naga will return in the story "Fox Trap!".

*April last appeared in April O'Neil: The May East Saga #3.

*The Turtles just finished dealing with the Eyes of Sarnath in TMNT Adventures #44.

*The Turtles and Ninjara left Japan in TMNT Adventures #33.

*The torri were revealed by Ninjara to be gateways to the underworld in TMNT Adventures #31.

*This issue was published in the UK by Fleetway as TMHT Adventures (#82).

When she first appeared, I really didn’t care much for Ninjara and was never shy about it in my reviews, either. She still isn’t very high up on my list of preferred characters, but she’s begun to grow on me, I’ll admit. I think most of my distaste with her stems from the furry fanbase surrounding her than anything actually inherent in the character. And admittedly, that’s not particularly fair. Fandoms can ruin just about anything if you let them.

But even though she is growing on me as a character, I can’t say I care much for this issue at all. It’s a frothing brew of overactive teenage hormones and over-the-top romantic drama, slathered onto a half-baked plot that would have been better suited to two issues instead of one.

The hunter is ostensibly the primary antagonist and driving force behind this story, yet he doesn’t appear until page 16 and is dead by page 24. He’s so thinly characterized that he doesn’t even warrant a name-drop. The main conflict of the story is actually the bad vibes between Raph and Ninjara and how they overcome them, which in itself wouldn’t make for bad drama, but the execution is pretty awful with the villain of the piece becoming an afterthought to the narrative.

So what we get in exchange is Raph and Ninjara’s first “lover’s quarrel”. But while you’d think the whole “you gave away our lair’s location without telling us!?” spat would be enough, it’s padded with moments of jealousy from both sides, as Raph dislikes Kenji and Ninjara dislikes the demon-babe. Instead of enhancing the bitterness between the characters, it really just dilutes the core of their disagreement, diverting focus away from it by piling on excessive melodrama… excessive melodrama that takes away from the whole “kidnapping” conflict, too.

It’s just annoying, is what it is.

It was nice to finally get to see this “ancient race of Japanese fox-people” that we heard about when Ninjara first showed up over 15 issues ago and it helps to give Ninjara some additional background (which she sorely needed). However, the story is too compact in this one issue (which also has to take time setting-up the Sarnath conflict for next issue). If it had been decompressed out over two issues, I think the entire thing, overdone romantic melodrama and all, would have really benefitted. As it is, it just tries to get too much into 28 pages and we’re left with a badly unfocused mess.

Grade: D (as in, “Do we need to know how the hunter found the magically hidden island that no man has discovered in centuries? Nah, probably not”.)