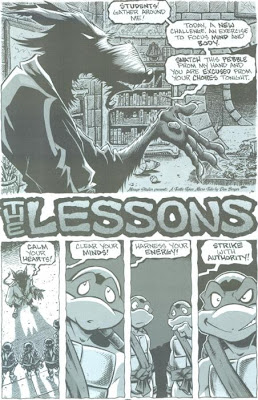 Down in the sewer lair, Splinter calls the pre-teen Turtles to him for the evening’s lesson. Holding a pebble in his hand, he says that if any of them can snatch it from him, they’re excused from their chores.

Donatello tries first, but is too slow. Michelangelo is badly off balance and misses. Leonardo makes a good effort, but telegraphs his move and fails.

Lastly, there is Raphael, who is taking forever to make an attempt. Nervously, li’l Raph asks what the rules of the game are. Before Splinter can finish saying “there are no rules”, Raph taps Splinter’s hand, bouncing the pebble into the air, where he catches it (much to Splinter’s shock).

Later, in the kitchen, Splinter is hard at work doing the dishes, considering to himself that being a sensei may be a more difficult task than he had anticipated.

As with “Awww… rats”, “The Lessons” is another cute little peek into the early years of the Turtles’ lives, brought to us by Dan Berger.

As with Berger’s similar cute comedy relief back-up strip, there isn’t a whole lot to say about it. The page where each Turtle makes their attempt to swipe the pebble and fails is a nice glimpse into their personalities; Don spends too much time thinking about his move, Mike is too clumsy and Leo tries too hard. Meanwhile, Raph succeeds because he “breaks the rules”, so to speak.

Not a major thing, but it showed how the Turtles’ unique personalities affected their training in both good and bad ways.

Berger’s art is Berger’s art, which is to say it’s very expressive and full of energy. As with “Awww… rats”, I suppose my one grievance is that Berger draws the pre-teen Turtles wearing their standard “robber mask” bandanas instead of the full skullcap kind, which they’re typically shown sporting in their early stories. He also doesn’t draw them looking particularly “childlike”; the only way you can really tell that they’re kids is the variation in scale when they’re standing next to Splinter. The sashes were a neat touch, though.

Grade: N/A (as in, “Now consider this, Splinter: if you let them order pizza for every meal, there’d be no dishes!”)
Posted by TMNT Entity at 10:04 PM