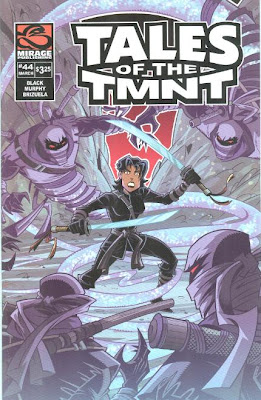 Frontispiece: A young Karai sits on a cliff overlooking a small Japanese village. She considers how frightening the battle between yin and yang and light and darkness is; how hard it is to maintain harmony. She knows that this battle is within us all… 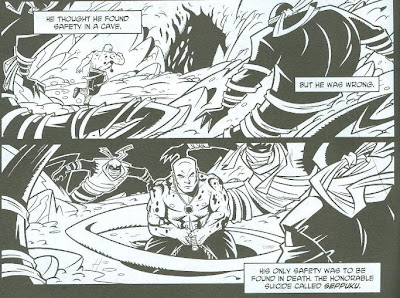 In her small village in the rural forests of Japan, a young Karai prepares herself for a great quest. She contemplates the legend of Takashi, one of the greatest warriors of the Foot Clan. He wore an amulet around his neck as a symbol of his great skill, but one day he went insane and slaughtered his own soldiers. Haunted by their spirits, Takashi retreated to a cave in the mountains and committed seppuku (ritual suicide). However, the spirits of the fallen Foot Soldiers would not let him rest and trapped his soul inside his amulet. They then became elemental spirits, guarding the amulet within the cave, for the amulet could bring whoever possessed it all of Takashi’s skill (and madness).

Wanting to bring the amulet back to the Foot Clan, Karai joins with several other Foot trainees for a quest into the mountains to locate it. Along the way, several members of the group become concerned about Yoshikiku, whose zeal to recover the amulet has caused him to behave violently (particularly toward Hikaru). 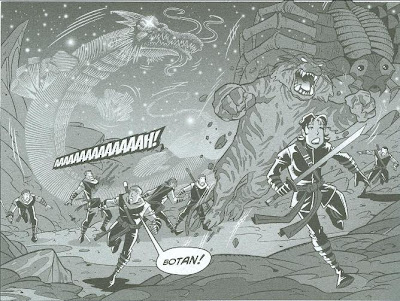 Camping for the night, the Foot trainees are suddenly besieged by the spirits of the fallen Foot Soldiers, who have taken on the forms of a spectral dragon, tiger and spider. The trainees fight back, but all are killed save Karai, Yoshikiki and Hikaru. They escape the carnage into a cave and follow a winding series of tunnels. Hikaru races off ahead of his teammates, disappearing in the darkness.

Eventually, Karai and Yoshikiku happen upon the skeletal remains of Takashi, but Hikaru has beaten them to the amulet. Fueled by the belief that Yoshikiku wanted it all for himself, Hikaru is driven to madness and, with the skill of the amulet in his possession, beats his former teammates senseless. As Hikaru prepares to execute them, Karai and Yoshikiku escape from their bonds. Yoshikiku, overzealous though he was, truly did want to bring the amulet back to the Foot Clan to bring them greatness. Unfortunately, he lacks focus and is killed by Hikaru. Karai is next up to the plate, now driven by the urge to free Hikaru of the curse and avenge Yoshikiku’s death. Using Yoshikiku’s sword, she kills Hikaru, freeing both his spirit and Takashi’s from the amulet. 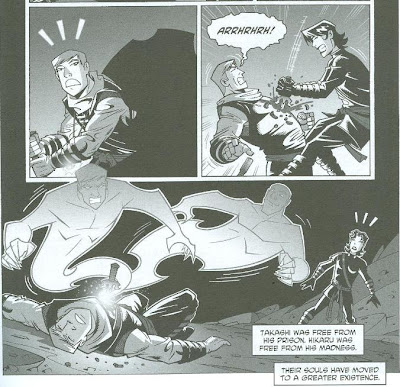 Gathering the corpses of her fallen teammates, she returns to her village. In the years to come, she hears tales of other warriors traveling to the caves to gain the amulet and perishing in the quest, refueling the cursed bauble with their tortured souls. She, however, considers that it wasn’t the amulet that made her great, but the strength she found within herself during her trials and tribulations. Standing before a fountain dedicated to her fallen teammates, Karai reflects on this.

*Karai is not the daughter of Oroku Saki in the Mirage series as she is in the 4Kids cartoon. As a matter of fact, she may even be older than Oroku Saki, as she has an adult-aged daughter by the time she reappears in TMNT (Vol. 1). As such, this is the earliest story in the Mirage TMNT timeline (disregarding time travel stuff).

*This issue also contained a back-up story, “The Lessons” by Dan Berger, and a bonus pin-up, “Patrol” by Eric Talbot.

Karai’s a character I don’t think I’ve really discussed at any sort of length on this site, yet. I suppose I was waiting until I got to “City at War” but shit, at this rate that’ll take a decade. So “The Amulet” seems like a good place to lay down my impressions of her.

In many ways, Karai was the perfect successor to the Shredder. Where the Shredder was a somewhat typical overlord-style super villain willing to throw his whole organization and all its resources away for a petty blood debt, Karai was the opposite. Far more tactical and level-headed, she ran the Foot more like a business and didn’t see the value in throwing away the lives of expensively-trained assassins on personal vendettas. If siding with the Turtles was the smart move to make at the moment, then she’d side with them.

Unfortunately, like a lot of characters, she never really exceeded her initial appearance and kind of petered out into obscurity or insignificance once “City at War” had concluded. She was absent from TMNT (Vol. 2) because there was no Foot involved in that series, she was conspicuously absent from TMNT (Vol. 3) with the occasional reference thrown out here and there, and by the time she came back for TMNT (Vol. 4), the volume was moving so slow that her subplot failed to reach any sort of fruition before Laird put the series on indefinite hiatus.

Her appearances in Tales of the TMNT (Vol. 2), seldom though they were, felt like a bit of a mixed bag. She was wildly out of character in “Silent Night”, while stories such as “The Proposal” showed a darker and more malicious side to her that I didn’t especially care for. “The Amulet” is probably the best use of the character in this second volume of Tales of the TMNT, though that’s a bit of a hollow compliment, as she hardly has a personality in the story.

“The Amulet” is less of a thrilling look into the early years of Karai as it is an interesting peek into the Foot Clan and their trainees. Karai narrates the story but she is utterly dry about the whole thing, with her “honorable” personality (if you can call it that) preventing her from making any colorful observations. The issue reads very, very quickly despite being 27 pages and you don’t really feel like you know anymore about Karai as a person by the time you’ve finished than when you began.

Dario Brizuela is one of my favorite artists to contribute to Tales of the TMNT (Vol. 2), unfortunately, “The Amulet” is probably one of his lesser offerings. All the members of the Foot trainees look identical. Even when they’re calling each other by name you have to stop and figure out who is who. When the cast is whittled down to just Karai, Yoshikiku and Hikaru, you STILL can’t tell which of the guys is which until someone says their name. There’s also a rather bad break in narrative flow where Hikaru supposedly goes running off ahead of the others, but we don’t see any of that and have to rely on Karai awkwardly describing the scene to us, as it apparently happened between the panels of a page.

Karai is a character who reached her zenith in “City at War” and had nowhere to go afterward; or at least no one took her anywhere interesting. “The Amulet” results in something of a “why bother?” story, as we learn nothing about her character or history that matters and it doesn’t enhance our perception of her in any meaningful way. If you’re into Foot-centric stories then it is kind of cool to see one completely from their point of view, and predating even the birth of the Turtles, but that’s about all the issue has going for it.

Grade: D (as in, “Did Brizuela have to take the ‘all Japanese people look the same’ stereotype this far?”)
Posted by TMNT Entity at 12:26 PM