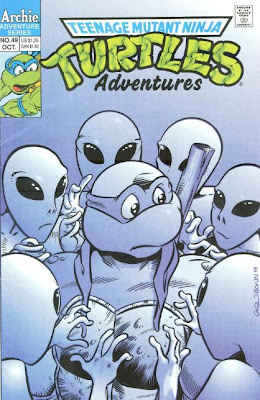 “The Dream of the Blue Turtle” 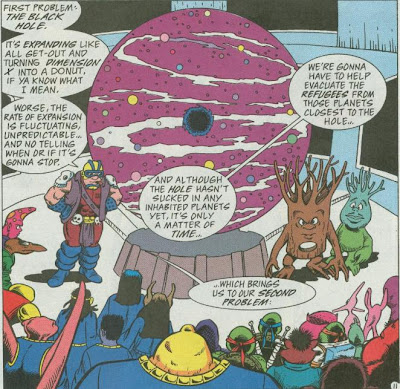 Back at Stump Asteroid, Leo brings the news that Don has vanished. Unfortunately, their mission is too dire to waste time looking for the AWOL Turtle. Trap brings everyone into the war room and explains the situation. The black hole at the center of Dimension X is steadily growing and drawing closer to inhabited planets. As refugees evacuate, the Aerwyl Imperial Fleet, led by Emperor Mazool, has been attacking them; looting the refugees and enslaving them. That’s why Nova Posse quit the fleet and now they want first crack at taking down Mazool. Trap breaks the team up thusly: The Turtles will accompany Nova Posse on their mission to take down Mazool while Trap the rest of the armada on Stump Asteroid take on the Aerwyl Fleet. 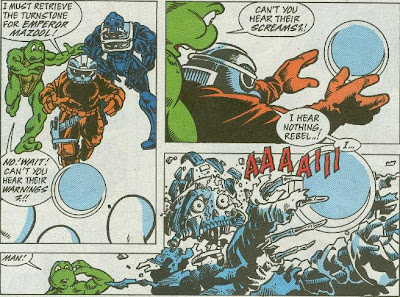 In the void, Don is surprised by the sudden arrival of Sarnath’s ship and the Imperial fighter that shot it down into the black hole. The two ships crash and though Don tries to help Sarnath, the Imperial attempts to fight him. However, the Turnstone will not allow any of the parties to do battle. The Imperial immediately notices the Turnstone and makes a grab for it. The Sons of Silence try to warn him not to, but only Don can hear their telepathic cries. The Imperial disintegrates the moment he touches the Turnstone. Sarnath becomes worried as Don claims that the Turnstone is speaking to him, asking him to take hold of it. 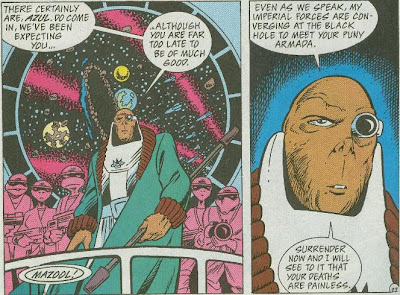 Above Mazool’s World, Nova Posse sneaks past the Aerwyl guard using a fake access code and they, along with the Turtles, drop down into the forests surrounding the Emperor’s stronghold. Using their various powers and skills, Nova Posse makes it through the alarms and the guards, arriving at Mazool’s control center. Mazool orders them to surrender, as his Fleet has already poised themselves to destroy the armada at Stump Asteroid. Suddenly, Mazool receives a distress call from his admiral; the black hole has doubled in size and is swallowing up their ships.

Inside the black hole, in the void, Don has seized the Turnstone and he looks a little too happy about it.

On the volcano base of the Mutanimals, Future-Don and Future-Raph appear through a timeslip. Future-Don reminds Future-Raph how important this trip is, causing Future-Raph to become sullen, knowing how things turn out for their friends in his present. 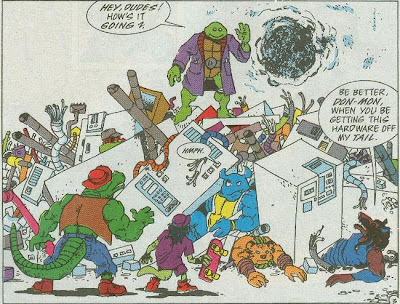 A short while later, the two future Turtles appear through a second timeslip, bringing a haul of future tech along with them to install in the base. After saying hi to the Mutanimals, both teams get to work installing all the cool stuff.

Suddenly, the four mysterious assassins drop in through the mouth of the volcano, guns blazing and swearing death to the Mutanimals.

*The Sons of Silence were vanquished and the Turnstone sent away by Cherubae in TMNT Adventures #13.

“The Black Hole Trilogy” carries on as Steve Murphy (Dean Clarrain) resurrects more forgotten plot threads from TMNT Adventures’ infancy! As I’ve gone on record as saying before, the opening arc of TMNT Adventures (when it started publishing new material, that is) happens to be one of my favorite storylines in the whole series, so it’s a thrill to see the dangling loose ends surrounding the Sons of Silence and the Turnstone crop up again.

The Sons of Silence were kind of weird additions in the opening arc of the series. They appeared out of the blue as these strange henchmen of Krang’s with scarcely any background and they were vanquished by Cherubae as quickly as they came. They were just this bizarre, unaddressed anomaly. “The Black Hole Trilogy” brings them back, tying them closer to the Turnstone and giving them some extra characterization beyond “Krang’s weird alien henchmen”.

And I love the politics of Dimension X. It’s great to see the goings-on of that distant galaxy (it’s a galaxy and not an actual “dimension” in the Archie Comics) beyond just the goofy scheming of Krang and Co. There are other evil warlords and emperors floating around, willing to fill the void left when Krang was banished to Morbus and they do so admirably. In all honesty, Krang’s machinations seem particularly childish and ill-conceived next to villains like Emperor Mazool and other evil overlord types, like Maligna and Null. I can sort of see why Murphy decided never to bring Krang back in TMNT Adventures, as he’d been so tremendously outclassed by other villains at this point in the series, dredging up his “threat” would be a bit of a downswing in storytelling.

As for “Megadeath”, I’m not quite sure where this one places. I suppose the Merdude miniseries could occur either during the “building the volcano base” montage on Page 4 or before “Megadeath” entirely, with Future-Don simply “returning” with more stuff to finish building the base. The way this story begins, it’s like the Mutanimals haven’t even started building their base yet, but the way the Merdude miniseries is written, it’s like Future-Don is bidding them farewell for good when he exits in the second issue.

They don’t really fit together perfectly, but they’re not totally incongruous, either. Personally, I just say “Future-Don came back with more stuff after the Merdude miniseries” and call it a day.

Grade: B (as in, “Be grateful the opening scene ended before Don had the chance to attach that suction cup to his wang”.)