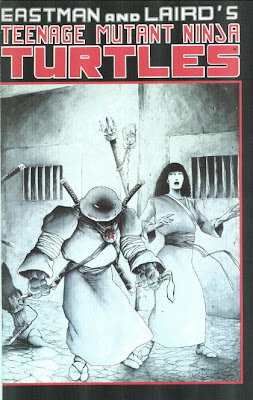 It is Feudal Era Japan and Micaelangelo has been wandering the countryside for three days, searching for his lost brothers. As night falls, he is met by a small family: the elderly father, Toshiro, the infant boy, Sakai, and the beautiful teenage daughter, Tai. They enjoy each other’s company for a while (with Mike and Tai immediately hitting it off), at least until Toshiro and his family are attacked. As it turns out, Toshiro is a displaced feudal Lord and Daimyo Orkai has sent a unit of his corrupt samurai to assassinate him and kidnap Princess Tai. Mike successfully protects Lord Toshiro and Prince Sakai, but the evil samurai Tachi absconds with Princess Tai, whom he intends to make his bride. 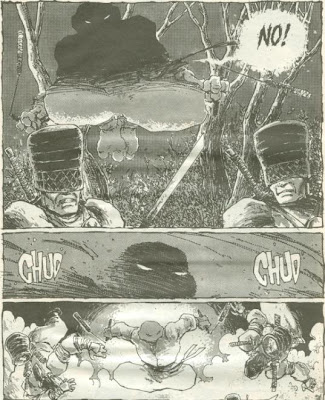 Lord Toshiro explains to Mike that Tachi is the son of Daimyo Orkai and that if he should marry Princess Tai, Orkai would gain control of all his land. Mike swears to rescue the princess and races off. Fighting his way into a village at the heart of Orkai’s province, Mike borrows a peasant’s hat and sneaks into an inn. There, he waits for one of the drunken samurai to stumble out of the joint then promptly kills him and takes his uniform. Mike then uses the disguise to sneak into Orkai’s stronghold.

Meanwhile, Orkai berates Tachi for failing to kill Lord Toshiro, as in order for their marriage scheme to work, Toshiro must be dead.

Mike finds his way into the dungeons and Princess Tai’s cell. He’s about to rescue her when a hulking executioner attacks him with an axe. Mike frees Tai in the chaos and tells her to make a break for it while he deals with the executioner. Tai doesn’t make it very far, as she’s quickly cornered by Orkai, Tachi and their man-eating, um, velociraptor? 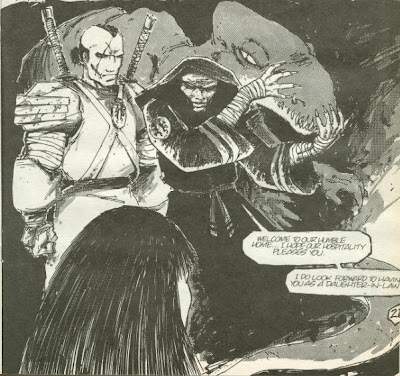 Princess Tai is defiant to the last, though Orkai assures her that after the marriage is done and her usefulness is through, she will be killed. Mike then steps into the room, carrying the corpse of the executioner. Orkai sics his dinosaur on Mike, but he easily stabs it through the skull with his katana. Tachi enters the fray, but Mike blocks his attack with his nunchaku then fells the samurai with a kick. Grabbing Tai, Mike escapes through a window.

Orkai’s guards pursue Mike and Tai, eventually trapping them on a bridge. Orkai and Tachi catch up, ready to finish the deed, when Lord Toshiro intervenes, backed by a small army of armed peasants. The peasantry have had enough of Orkai’s tyranny and have joined with Lord Toshiro in rising against him. Mike and Tachi go at it once more, with Mike easily besting the arrogant samurai. Lord Toshiro then banishes Orkai and his son, under penalty of death should they ever return. 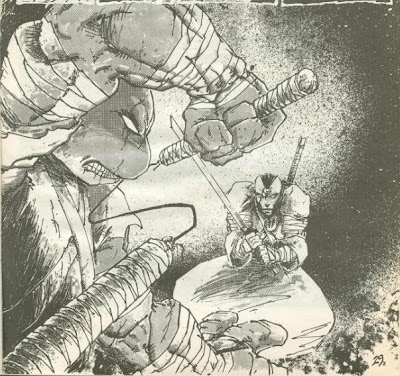 …Back in Northampton, Mike sits at a desk in his room, putting the finishing touches on his story. He asks Klunk if he thinks the thing is too corny, though.

*Mike’s love of writing won't resurface in the Mirage canon until Tales of the TMNT (Vol. 2) #30. It will become a major plot point in the Image volume, starting with TMNT (Vol. 3) #6.

*Mike has a poster of Eastman and Talbot’s “Melting Pot” in his room.

*This issue also contained a bonus pin-up, “That’s All, Folks” by Eric Talbot.

This is one of my favorite stories in the “Exile” era of TMNT (Vol. 1) and one of the better Michelangelo-centric issues of the whole series. Most Mike-heavy tales opt to focus on the humor of the character; his “comedy relief” nature and that’s a very thin tightrope to cross. If you’re not funny, then the whole thing falls apart. And even if you are funny, the nonstop barrage of jokes can grow tiresome, making Mike a character best taken in small doses. But whatever the case, focusing too much on Mike’s humorous nature has the side effects of rendering him thin and two-dimensional; there’s gotta be more to the guy then goofing around and making puns, right?

“Distractions” is one of the most important Michelangelo stories ever written as it illustrates that there’s a deeper, more intelligent and creative aspect to the character beneath his seemingly single-minded silliness. Unfortunately, this aspect of Michelangelo would be summarily ignored by Mirage for the better part of ten years, not to be approached again until Gary Carlson’s TMNT (Vol. 3) (the Image series). Mike’s love of writing really blossomed in that series, taking a one-off plot point no one at Mirage thought mattered and really running with it. When Laird insisted that Volume 3 be removed from continuity because it “didn’t feel right”, it had the side effect of removing what amounts to the only shred of character development Michelangelo ever had, reverting him back to a dull, shallow, juvenile comedian with no ambitions of any kind.

But that’s getting ahead of things. “Distractions” is the genesis of Mike’s creative spirit and a fun insight into his private aspirations. As the story starts, if you are unaware of the “twist” on the final page, you might already start filling in the narrative blanks on your own, presuming that another misadventure with Renet has stranded the Turtles in Feudal Era Japan. Of course, there are clues that things are not what they seem sprinkled about the issue; such as nobody seeming to notice or care that they’re talking to a giant turtle, either all the Japanese people speaking English or Mike inexplicably speaking Japanese, and a self-admissive cornball narrative that makes the adventure ring insincere even before you get to the end.

There are some… problems, with the issue, but the “story within a story” nature and the fact that it was supposed to be an amateurish draft penned by a teenager in his spare time makes me wonder how many errors were intentional and how many were genuine screw-ups. Just about every Japanese name in the story is ridiculous and only vaguely “Japanese-sounding”. You’ve got characters with gibberish syllables for names and apparently Lord Toshiro decided to give his son a familial name for his given name (I’m aware that “Sakai” was named after Stan Sakai but it’d be like me naming my son “Eastman Pellegrini”). Then you’ve got “Orkai” which doesn’t even work with Japanese syllable structure. I’m not really complaining about these, mind you; just pointing them out. They’re exactly the sort of thing a 15 year-old that’s really into Japanese culture but knows approximately fuck all about Japanese culture beyond movies and comics made by Americans would write.

Other mistakes are a little tougher to brush away as simply “Mike being an amateur author”. Eric Talbot seemed to be drawing his pages at a smaller size than most other Mirage publications, so there are huge white borders surrounding each page. Other times, he seemed to be drawing the pages bigger than the physical comic could contain; page 21 is actually cropped to the point where part of Orkai’s speech bubble and even the page number in the corner are cut off. Then there are the spelling errors in names and a weird punctual error where two sentences from Orkai somehow got fused into one. Saying this issue looked “rushed” would be unkind, but it probably could have used some more meticulous copy editing.

I’ve droned on and on about Eric Talbot’s artwork before, but only in regards to his back-up stories, as they’re the only Talbot TMNT comics I’ve reviewed up until now. The man would only seldom produce full-length issues, with this being one of the few, but it’s a gorgeous piece of work. There’s a tremendous sense of intensity in Mike from his posture to his expressions to his ruthless, gory and intentionally over-the-top fight sequences. I love the way Talbot does his inks; something along the lines of “organized chaos”. It’s messy, but in a good way. Everyone is dark and heavily shadowed and it’s just a dirty, brutal comic.

Talbot dedicates a whole page to giving a special thanks to the creators that inspired him, namely Frank Miller, Stan Sakai, Kazuo Koike and Goseki Kojima, as well as all the folks at Mirage. You can easily identify traces of all those who inspired him in this issue, with I think Frank Miller standing out above the others.

“Distractions” is a rather unassuming story, feeling like a dispensable narrative one-shot that can be skipped because “the story wasn’t ‘real’ and it doesn’t count”, but that seems a tad short-sighted. It plants the seeds for a major part of TMNT (Vol. 3) and introduces a side to Michelangelo that I really, really wish other TMNT mediums would consider exploiting, especially the cartoons. There can be more to Mike than bad comedy and pizza if only other writers would make the effort.

Grade: B (as in, “But the closest thing to ‘kanji’ in this entire issue set in Feudal Japan are some squiggles on the wall of the inn. Eh, close enough”.)