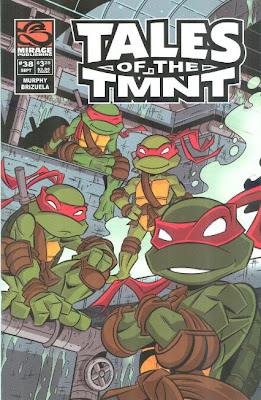 Frontispiece: While playing chess against a pouty teenage Shadow, a smug Donatello considers schemas; the mental devices people use to interpret and catalog their perceptions of the world. Yep, that’s the kind of stuff he likes to think about, which reminds him of a story… 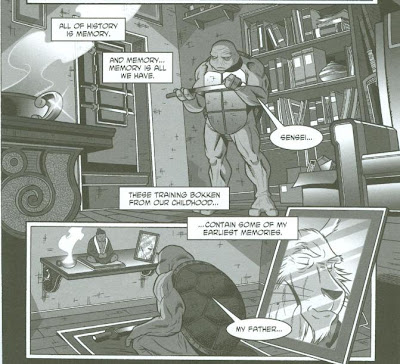 The future. In his training chamber, an elderly Leonardo inspects his childhood bokken (wooden practice swords used in martial arts) and recalls the many memories attached to them. As memories of his long gone Sensei, Splinter, flood his mind, Leo sits down to meditate.

It’s the distant past and the Turtles are all still young children, training in the Crane Style with Splinter. Their lesson complete, they get permission from Splinter to go play pirate in the sewers (with Splinter leaving Leo in charge). Out in the tunnels, they reach the edge of their “safety zone” where they’re not allowed to go any further. Unfortunately, Raph causes Don’s toy pirate ship to go drifting beyond their reach. Much to Leo’s disapproval, the Turtles cross into the “forbidden zone” to go find it.

Elsewhere, four strange aliens, armed with guns and a tracking device, make their way through the sewers toward the T.C.R.I. building. And at said building, the mutant alligator Leatherhead convinces his Utrom friend, Dr. X, to allow him to take a relaxing swim through the New York sewer system. Dr. X warns him to be careful and Leatherhead dives down into the tunnels. 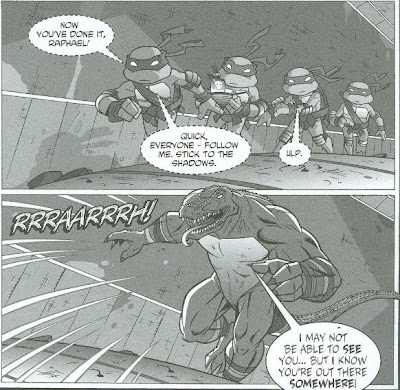 Down in the tunnels, the Turtles find Don’s pirate ship and something else… a humongous alligator. Leo warns Raph not to tease it, which of course only makes the little brat want to bug it. Raph bonks the gator on the head with a rock, revealing it to be Leatherhead. Enraged that he cannot find so much as a moment’s peace, Leatherhead loses his shit and goes on a mindless rampage (scaring the Turtles away). Leatherhead’s rampage coincidentally brings him into contact with the four aliens, which he summarily beats to a pulp. He recovers from his berserker in time to keep from killing them, though he is thoroughly ashamed of his actions. Dr. X approaches him and tells him that he should be proud he regained his faculties before it was too late, but more importantly, that the aliens were the Sigmurethites; enemies of the Utroms that were no doubt looking for a means of infiltrating the T.C.R.I. building. 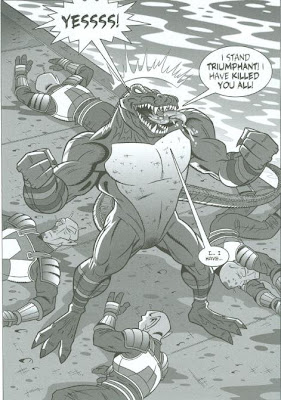 Back at the edge of the “safety zone”, the Turtles return to find a very irritated Splinter waiting for them. He promptly grounds them, to which Raph tries to explain that their pirate ship was stolen by eels and they had to get it back by fighting a shark and it wasn’t their fault. Splinter grounds Raph twice as long for lying… and doing it badly.

The Future. Elderly Leo completes his meditation. Placing the bokken back on the rack, Leo steps out onto the balcony of his futuristic home and overlooks the sun setting into the sea. He considers that memories are all that is left of him.

*Chronologically speaking, Dr. X previously appeared in Tales of the TMNT (Vol. 2) #50, in the back-up story “Threads”. Though he/she will have retroactively been included in TMNT (Vol. 1) #7, Dr. X won’t make another named appearance until TMNT (Vol. 3) #19.

*This issue also contained the bonus back-up story, “Awww… rats!” by Dan Berger and a pin-up, “Leatherhead” by Michael Gaydos.

*A “triptych” is a piece of art that has two folding points, one on each side, and thusly consists of three pieces. A “pastiche” is a combination of multiple stories or narratives, bridged together by some contrivance. So in the case of this title's portmanteau, a “triptyche” would be a pastiche constructed from three interlocking narratives that fold into one another. And that concludes today’s English lesson. Have your homework on my desk by Wednesday.

*This issue was reprinted in TMNT Comic #12 and TMNT Comic #13 with new colors (either by Junior Tomlin or Hi Fi Design).

This is one of those stories that I’m unsure as to whether I like or dislike, as there are elements to it I appreciate and others that I do not.

As a “young Turtles” story, it’s one of the best for its portrayal of the characters in their youth. Most of the stories about the Turtles at this age are either shorts that last maybe two or three pages, or only focus on a single Turtle and not their dynamic with the others. As a full length issue, you get to see a lot of developmental aspects of the Turtles, such as Splinter charging Leo with responsibility for his brothers at such an early age, Don being a mechanical prodigy and Raph being a little punk (Mikey, unfortunately, gets no real characterization). All the classic relationships between the characters are present, but rendered in a childish way befitting the tone and timeframe of the story.

There’s a sense of humor to the story, too, that’s consistent in most of these “pre-Teen Turtle” stories. I really liked the sign Splinter put up at the edge of the “safety zone” reading, “Forbidden! Turn back, my sons!” A second sign reading, “This means YOU, Raphael!” probably wouldn’t have been Splinter’s style but I’d have laughed even harder if they’d included it.

It also works nicely for showcasing Dr. X’s bond with Leatherhead, which was talked about at length in TMNT (Vol. 3) but we were intended to take at face value. As a supplement to “Threads” (which shows Dr. X taking a baby Leatherhead as a pet), it flows nicely.

As for the main problem with this story, it has to do with the fact that it somewhat undermines Leatherhead’s first appearance in Tales of the TMNT (Vol. 1) #6 in several ways. He sort of loses his edge when he makes such an unceremonious “first appearance” (chronologically) in this story, but more importantly, it badly clashes with the continuity of the Turtles. Leatherhead never saw them, so he’s fine for not recognizing them when next they meet, but what’s the Turtles’ excuse? Did they just forget about that time they met a mutant alligator in the sewers? I mean, he even melodramatically announces his name to them, for crying out loud! There’s just very little benefit to this story when it erodes the narrative cohesion of the series like this.

And even moreso, the only reason the Utroms remained in the T.C.R.I. building is because they were stuck on Earth and nobody knew they were there. Except the Sigmurethites, I guess? They knew they were there and even tried to infiltrate their HQ. Presumably, the Utroms took the hostages alive (unless they didn’t survive the wounds Leatherhead gave them), so why couldn’t they have used whatever tech their foes had to contact the Utrom homeworld or, I dunno, just leave the planet? Once again, this story undermines a previously established plot point, an important one for logical reasons, and all for what? So Leatherhead could scare a bunch of baby Turtles in the sewer and send them running home to Splinter?

As much as I enjoyed seeing the Turtles interacting as kids for an extended period, I think this story does more harm than good, conflicting with several plot points and making glaring contradictions that aren’t so easily reconciled.

Dario Brizuela’s art is always a joy, though, and he draws a mean Leatherhead; so if the purpose of this story was to give Brizuela an excuse to draw the big gator, then I guess there’s really no use in complaining. The bookending segments with the elderly Leo were rather sweet, too. As for the title, I’m not sure which qualifies as the “triptych”: the combo of elderly Leo, young TMNT and Leatherhead, or young TMNT, Leatherhead and the Sigmurethites. It’s probably not worth thinking about.