The Wrath of the Fire God 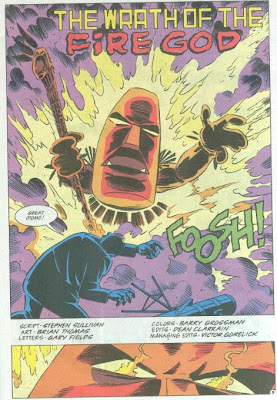 “The Wrath of the Fire God”

On the Hawaiin island of Kilaoto, the native chief Jon Sikahema and his councilmen, Aal Smith and Lelani Tuaolo observe the stars through a telescope. Carol Sagan and Cosmo Hawkins of the Scientific Council for Ecologically Sound Development want to build a new ecology research base, natural power plant and observatory at the base of the volcano and hope to convince the chief and his two councilmen to see things their way. After everybody goes home for the night, Aal stays behind to watch the stars and is suddenly approached by a giant flaming Tiki head claiming to be the god Otomo.

The next morning, at their timeshare, the Turtles fool around on the beach, lamenting that Slujj and Emmy had to leave early, but happy they still have two weeks to chill. Never one to have any fun, Leo tells his brothers to stop enjoying themselves and start cleaning litter off the beach because it wouldn’t be a TMNT Adventures special without this sort of shit. 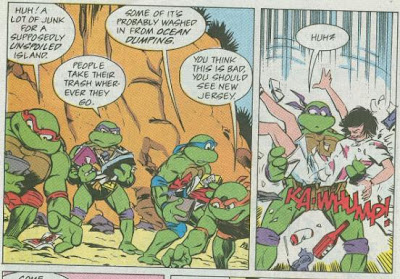 On a cliff-side path overlooking the beach, Sikahema and Lelani try to tell Aal he was dreaming, but Aal is convinced he saw Otomo and that the god doesn’t want them to build the observatory on his volcano. In the heat of the argument, Aal accidentally shoves Lelani, who trips and falls over the cliff. Luckily, she lands in Donatello’s arms. Sikahema and Aal come running down to see if Lelani is okay and everyone gets to know each other. Lelani tells the Turtles that the village is having a vote on whether to build the observatory or a hotel and invites them to sit in.

That night, the Turtles show up to the outdoor auditorium. Dolph Hilife, owner of the Hilife hotel chain, and Ingrahm Volt, owner of Kilaoto’s oil-burning power plant, argue that by building the hotel and expanding Volt’s plant, they will create new jobs for locals and the tourism industry will bring in lots of money. Carol Sagan and Cosmo Hawkins argue that their proposal will create light pollution and most of the best jobs will be outsourced to non-islanders. Their proposed research facilities, natural power plant and observatory will be more expensive, create less jobs and have no tourist appeal, BUT the jobs they do create will all go to locals and there will be less pollution. Aal speaks up, preaching that Otomo does not want the observatory on his volcano and that they must choose the hotel, instead. 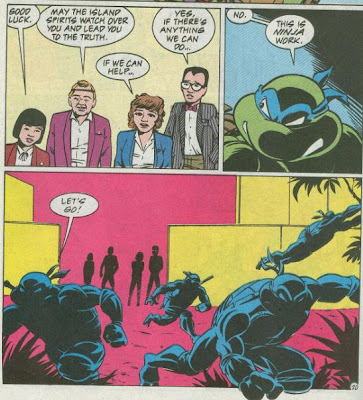 Suddenly, Otomo appears out of the sky and attacks, swearing death to anyone who comes near his volcano. Before the Turtles can attack, Otomo vanishes. The villagers are ready to vote for the hotel, but Sikehema tells them to wait 24 hours until their attitudes have calmed and they can think more rationally. This buys the Turtles time to investigate “Otomo”, whom they think is a phony.

Scouring the forest surrounding the volcano, the Turtles discover a secret tunnel. Following it, they end up in a high tech facility full of gizmos and even a parked flying saucer. Taking cover, they spot Hilife coming out of another room, talking to a weird alien. The alien is one of the Grem; invaders who feed on lava. By building the hotel adjacent to the Grem’s new base, the aliens will kidnap all the powerful and wealthy visitors, brainwashing them to do their bidding. Eventually, this will lead to world domination. One tourist season at a time, apparently. Yeah. 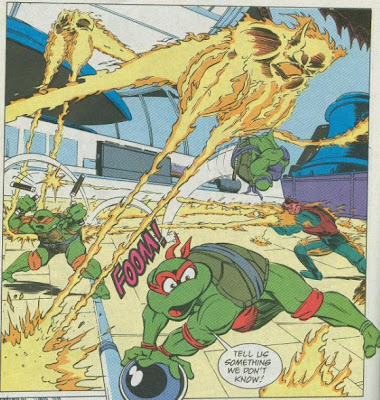 As it happens, the Grem have already kidnapped Carol Sagan, whom they intend to brainwash into changing her mind about the observatory, thus keeping their plans unhindered. The Turtles charge, saving Carol and knocking Hilife out. The Grem transform into fire-monsters and put the Turtles through their paces. Carol has a plan and with Leo’s help, lures the three Grem invaders toward a series of pipes. Leo cuts open the coolant pipe, hosing down the Grem and freezing them solid. The Turtles then load the aliens back into their flying saucer and Carol programs it to head back to their homeworld. Hilife, meanwhile, is taken to the proper authorities.

The next night, the villagers vote for Carol’s plan. Aal apologizes for being fooled by the fake Otomo, but no one holds it against him. Lelani asks if there’s anything the council can do to thank the Turtles for their help. All they want is some peace and quiet for the rest of their vacation… and maybe two weeks-worth of pizza! Ha Ha Ha. Pizza. Bet you didn’t see that coming.

*This story is continued from “The Last Sea Serpent”. The story continues in "The Ghost of 13 Mile Island!".

*The Grem will return in "The Fifth Turtle".

*This story was dedicated to the memory of Carol Kalish.

1992 was a pretty awful time to be reading TMNT Adventures. The ongoing had just finished several one-off stories centering around conservation of wildlife and toxic waste pollution and was heading toward the “Midnight Sun” arc; a three-parter railing against nuclear power plants. Then there’s the TMNT Meet the Conservation Corps one-shot, but the less said about that, the better. And amongst all that, seasonal specials were being published, all containing stories about protecting the environment.

Yeah, 1992 pretty much sucked for anybody reading the book because the environmental messages had completely enveloped every single facet of the series. Between the ongoing, the one-shots and the specials, there was no escaping it.

Thankfully, following this, the specials will start veering toward less preachy and more entertaining storylines (likewise, the ongoing quickly found a way to combine messages with stories that didn’t suck). Until then, however, you’re going to have to suffer through a lot of this shit.

“Wrath of the Fire God” isn’t the worst of the environmentally-charged stories, even if it’s lacking in excitement for the first, er, 20 pages. Its 36 pages long and you don’t get to the Grem, the actual antagonists, until page 22. Prior to that, the story consists of the Turtles righteously proclaiming their enthusiasm for vacation litter patrol and an agonizingly long and wordy debate on ecological research vs. tourist traps. Seriously, the debate lasts six paragraph-packed pages, and while it could have been enlightening, it really isn’t. Hilife is so clearly painted as the villain, and Carol is so clearly painted as the level-headed crusader for environmental justice, that there’s never any doubt as to who is “right” and who is “wrong”. It’s just lecturing for lecturing’s sake. And it goes on and on and on.

What pulls this comic out of the compost heap, however, is the fight with the Grem in the last five pages or so. They’re some pretty exciting adversaries with their fire-powers and all, first hurling fireballs at the Turtles then transforming into demon-faced human torches. Brian Thomas does some great work on the action sequences, and you can tell that’s what the poor guy really wanted to draw; not 6 pages of people sitting in chairs, talking.

As far as the environmental message is concerned, this story centers on one I’ve found myself thinking about quite a bit, lately; light pollution. Living outside of Washington DC, the light pollution is pretty bad here and I can only see a handful of constellations when I look up into the sky at night. Unlike other types of pollution, you can’t really “fight” light pollution, either. As long as there are cities and houses and people using electricity to light them… there will always be light pollution. And unless I move to the middle of the Australian wastelands, I will never get to see a pristine night sky in my lifetime. It is depressing and I do find myself sympathizing with the message presented in this story, even if it offers no realistic solution beyond “Um, turn off the lights… I guess?”

Anyway, this is a pretty damn boring story until the last five pages, when it gets pretty awesome on a visual level. So it’s got that going for it.

Grade: C (as in, “Come on, assholes. Stop bringing glass to the beach. You know you’re not supposed to!”)