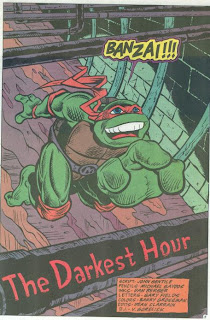 Down in the forgotten depths of the sewer, the Turtles and April are getting antsy. Apparently, Splinter gave them questionable directions to a place of absolute silence where they can all practice their yoga meditation techniques. Suddenly, an anthropomorphic radio breaks the absolute silence by blasting “Wild Thing” by the Troggs. The Turtles chase the little pest down a hole in the side of the tunnel.

The hole leads the five of them into a cavern where lava flows in rivers below. They chase the radio even further down until they happen upon a very strange world; a forgotten (and seemingly abandoned) city of huge black towers. The unsettling beauty of the place is ruined, however, by mountains of human garbage from the surface world. 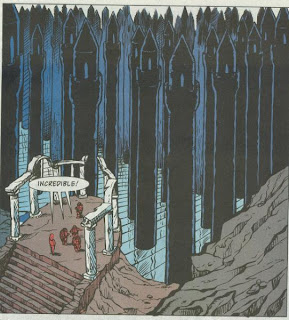 Not far away, in a laboratory, a sorceress named Mistia sees the Turtles and uses her magic to forge various electronics in the garbage into the Telebeast; a lumbering monster. The Turtles begin battling the Telebeast when April interjects, trying to calm the situation. Mistia explains that the Lower Regions have become infested with surface dweller trash that has fallen from a massive landfill up above. Enraged, she plans to eliminate the pollution at the source; by using her magic to turn ALL the garbage into man-eating monsters which she’ll unleash upon New York. 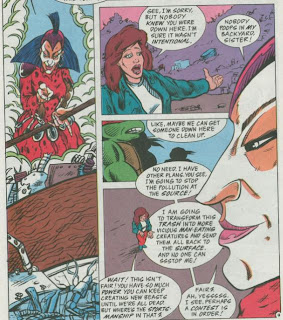 Knowing that she can’t reason with Mistia and that the Turtles wouldn’t stand a chance against an army of garbage monsters, April asks that Mistia give them a more sporting opportunity to defeat her. Mistia complies, locking April in a glass cage with only an hour of air. She then challenges the Turtles with this riddle, necessary to free their friend:

“If you stress a ‘T’,
And your words compress,
And you think instead of cower,
You’ll find the key,
To April’s redress,
In the Darkest Hour.”

Mistia vanishes in a cloud of smoke, leaving the Turtles to ponder the solution.

*This story continues in “The Darkest Hour II”.

*This story was part of a contest where readers were invited to submit their answers to the cliffhanging riddle. The winner would receive three pages of original TMNT Adventures artwork.

I really do dig Michael Gaydos’s artwork, though I think he has a better hand for drawing the Turtles and other mutants than he does people. April has always looked sort of… off, when he draws her. Not Bob Fingerman-ugly by any stretch, but not very attractive. His layouts are still great, though.

This 10-page story probably isn’t one of the more memorable ones to come out of TMNT Adventures Special, even with its contest gimmick at the end, but I like how it expands on the weirdness of the universe this comic dwells in. We’ve had quite a few “lost civilizations” unearthed throughout the course of this comic and its many spinoffs, so one more couldn’t hurt. And I’ll admit, the big sea of black towers made for a great set piece, even if nothing else in the story lived up to that level of eerie foreboding.

There’s also the fact that it quickly devolves into a diatribe about pollution and landfills, but at this point I think we’ve all developed a callous regarding the eco-preaching in TMNT Adventures, right? I know that I’m pretty tired of bitching about it, at least.

Being broken up into two 10-page shorts, the story moves almost hilariously fast in this thing. The Turtles find a lost civilization, they meet an evil Sorceress on the next page who is planning her world domination at that very moment, they talk, they fight and then we’re left to consider the cliffhanger for a season. Though the cage is just made out of glass, you know. The Turtles could probably just smash it.


Grade: C- (as in, “Could have almost mistaken the black towers for asparagus”.)