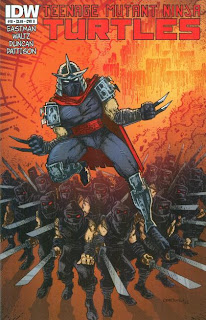 In the lair of the Foot, Karai introduces Splinter to Master Shredder. She begins to explain to him the nature of the Foot Clan, that they are assassins and thieves, but Splinter reveals he knows their methods far too well. Splinter asks why the Foot have kidnapped him and Karai explains that they have been gearing up for a war with a powerful adversary and they intend to win it. As their enemies have begun utilizing mutant soldiers, so have they (Alopex steps forth from the shadows). Splinter is invited to join their ranks or die. Karai tosses him a sword, as he must first prove his worth in a fight to the death with a very large Foot Soldier wielding a manriki gussari. 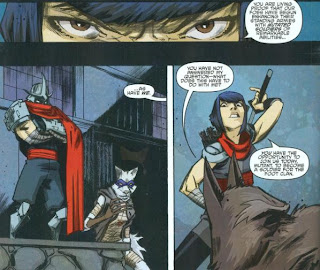 In the back of April’s van, tempers and frustrations between the Turtles have finally come to a head. Leo insists that they need to find the Foot Clan to rescue their father, but Don at last tells Leo he’s had enough of the mystical mumbo jumbo and firmly insists that they were never reincarnated. All the challenges they’ve faced so far (Alopex, the jewel thieves, Baxter’s goons, the ninja) have been human or scientific in origin and there’s no proof that the ninja they’ve encountered were even members of the supposed “Foot”. Raph finally blows his fuse, saying that he’s sick of sitting around watching everybody talk and wants some action. Mike jumps in, trying to calm everybody down. In the end, it’s April who soothes them, offering the Turtles a place to stay now that their lair is trashed. 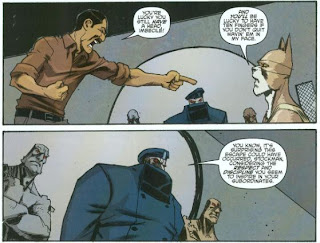 At Stockgen, Baxter is giving Old Hob the business, not that Hob gives a damn. General Krang, meanwhile, is not very amused with the fact that Baxter has lost the rat. Hob tells Baxter to get answers from Chet, the doctor who was guarding Splinter when the ninja showed up. Chet, meanwhile, is hiding out in a corner, making a call on his phone. He tells an individual on the other end to inform the “master” that the Turtles arrived shortly after Karai took the rat. 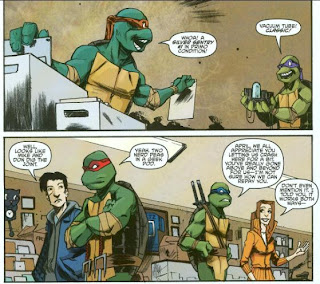 April takes the Turtles to the rundown Second Time Around shop; an old antiques dealership owned by her father but put in mothballs after his stroke. She tells them that there are apartments upstairs they can stay in until they figure things out. Inside the shop, Don and Mike are distracted from their worries by comics and vintage electronics. Leo and Raph bid April and Casey good bye, as it’s almost morning and the two college students have to get to class. As they leave in April’s van, a mysterious figure watches, noting that they now have “new neighbors”. 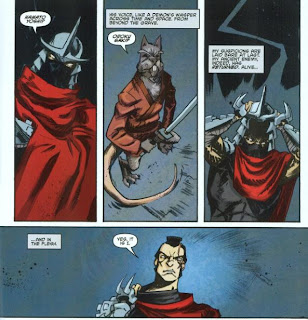 At Foot HQ, Splinter refuses to execute the Foot Soldier; valuing his honor, he tells the Shredder that he “won’t be a party to this disgrace”. The words are too familiar to the Shredder, and the villain realizes that Splinter is, in fact, Hamata Yoshi. The Shredder removes is helmet, revealing himself to be Oroku Saki. He doesn’t know how Yoshi returned from the grave, but having done so himself (or so he claims), he hasn’t the time to waste on stories, so he orders his Foot Soldiers to kill the rat.

*Hamato Yoshi’s past with Oroku Saki was detailed in TMNT (IDW) #5.

*Among the comics at the Second Time Around shop is a copy of Silver Sentry #1. Silver Sentry was a character from the 4Kids TMNT series.

*The organization Chet checks in with will be revealed in TMNT Microseries #8: Fugitoid.

*This issue contained three variant covers: Cover A by Duncan and Pattison, Cover B by Eastman and Pattison and Cover RI by Tyler Walpole.

What’s that, Will Smith? “Shit just got real,” you say? Indeed, sir. Indeed.

This was a real page-turner and probably one of the most suspenseful issues of IDW’s TMNT series; I’d probably rank it second to issue #5, in fact. There’s a great flow to the three separate narratives going on simultaneously and each comes with its own multitude of tension-building elements.

For Baxter, he’s just screwed up his last opportunity with General Krang and his head is about to roll. Seeing Baxter lose his smarmy composure was a treat and I especially liked seeing him talk back to Krang (though not as much as I enjoyed seeing Hob talk back to Baxter). As smart as he is, though, I hope that Baxter doesn’t let Krang take him down without a fight; a genius like his certainly has some self-preservation contingencies to fall back on, right?

What I really like about Waltz’s take on the Turtles is that they act like real teenagers. Mirage, 4Kids, Archie and Fred Wolf all treated them like miniature adults, with Mikey pretty much being the receptacle for all “immature” behavior (less so in Mirage, admittedly). Here, though, they’re all a percolating brew of hormones and egos and youthful defiance. They’re faced with losing their father and not knowing where to go, so they immediately start bickering like, well, kids. Because that’s what they are (which so many writers seem to forget).

The rivalry between Leo and Don has been one of Waltz’s most inspired character adjustments for his series and it was great to see the dam finally burst. Leo takes everything Splinter says on face value because he basically worships the old rat, so to have Don come out and say that their dad was either a liar or senile doesn’t sit well with him. Then Don backs it all up with his analysis of their many adventures and leaves Leo stumped to come up with a quality retort to back his claims (to say nothing of Don calling out Leo as a cruddy “leader”). Then Raph interjects with his impatient bullying and Mike tries to calm everybody down but no one will listen to him because he’s the runt of the litter… It was just a great bit of character chemistry, and while we’ve gotten arguments between the Turtles before, this one felt more sincerely tied into their actual ages. And, of course, April plays den mother as is her eternal curse in the TMNT universe.

Splinter’s plotline is probably what we all came to see, though. All things considered, Shredder doesn’t do much more in this issue than he did in the last page of the previous installment; he just stands around and looks cool. The reveal that he is, in fact, Oroku Saki back from the dead leaves me with many questions. Is he the same ninja from the Leo Microseries? If so, why was he running around in regular Foot Soldier garb? To secretly test the Turtles for their skill?

As a matter of fact, this issue opens up several cans of “da hell?” on the reader. Who is Chet talking to? Is he a Foot agent? Clearly, he doesn’t work for Krang and Baxter, so if he isn’t Foot, then who is the third party? And who was that standing outside the Second Time Around shop? And Hell, do we even know who the Savate ninja from TMNT #6 was working for, yet?

Duncan’s art gets better with each issue. Some readers have taken issue with a bit of “corner cutting” here and there in regards to detail or smudgy grey environments or that his layouts lack pizzazz, but I can’t hold anything against him in that regard. Duncan has gotten a monthly book out on time for ten issues straight, and quite frankly, his art is perfectly serviceable and befitting of the title. Take into account other so-called artists whom bigger name companies keep on because “they can make monthly deadlines”, like that no-talent porn-tracer Greg Land, and all of a sudden Duncan’s ability to produce these pages on an efficient and steady 30-day basis seems all the more impressive.

IDW’s TMNT is a slow-burn series that has a habit of asking questions faster than it answers them, but I can’t argue that it is effectively suspenseful. There was a lot of action in this installment and the three narratives were paced out particularly well. Best of all, though, were the character moments between the Turtles and it’s a relief to see that Mikey isn’t the only one who can act like an immature teenager sometimes (in fact, as he was attempting to defuse the situation, one could argue he was the most mature of his brothers!).

Grade: A (as in, “Androgynous is probably the best way to describe Duncan’s Alopex”.)
Posted by TMNT Entity at 1:05 PM