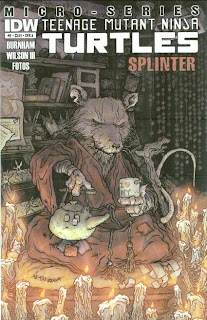 At Foot HQ, Splinter is surrounded by a legion of Foot Soldiers, all determined to kill him under orders of Oroku Saki: The Shredder. Fighting for his life, Splinter recalls how, with his dying breath, he swore that when he met Saki again in another life, he would kill him. However, that opportunity has finally arrived and Splinter finds himself hesitant to kill. Reincarnated, he has taught his children never to take a life unless it is the last resort. This dilemma causes Splinter to recollect the days of his youth, when he was still just a pupil amongst the Foot Clan… 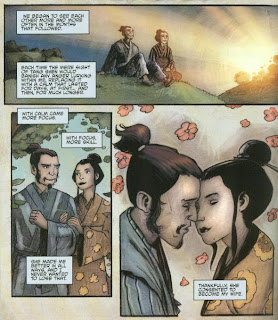 Feudal Japan. Hamato Yoshi has just gotten into another fight with a fellow student, much to the chagrin of Master Masato. The old sensei orders Yoshi to follow him into the forest. Masato delivers a lecture about how Yoshi has a fire inside him and that, if he fails to control it, the fire will consume him and all he holds dear. He then orders Yoshi to sit by a stream and meditate until morning. Yoshi realizes as the sun sets that he has anger issues, but cannot figure out how to control them. A voice startles him and he falls into the stream. A young girl named Tang Shen helps him out of the water and builds him a fire to dry him. The two spend the night talking and fall in love. Time passes and Yoshi finds that Shen’s love and affection has given him the means to control his anger. And with that under control, he begins to excel at his martial arts studies. Eventually, he and Shen marry.

Some while later, Yoshi and fellow Foot Ninja Oroku Saki sit in on a private meeting with Master Masato. Masato compliments Yoshi on his improvement (which Saki scoffs at) and gives the pair of assassins their latest assignment. The merchant Kaneko has paid the Foot Clan to kill Lord Ochi over the murder of his son. Yoshi and Saki are to follow Masato’s plans to the letter and execute Ochi while he sleeps. 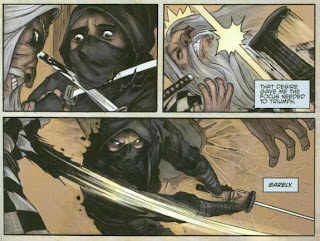 Infiltrating the castle of Ochi, Saki discards Masato’s plan, instead opting to distract the guards while Yoshi kills their target. Yoshi is hesitant, but some ribbing from Saki reignites the anger within him and Yoshi leaps recklessly into Ochi’s chamber. He finds Ochi still awake and with two guards by his side. Yoshi realizes his folly too late and the guards, as well as Ochi, attack him. Yoshi defeats the guards, but Ochi proves too skilled a swordsman and injures him badly. Not wanting to die without seeing Tang Shen once more, Yoshi narrowly triumphs and escapes.

Yoshi returns home to tell his wife good bye, but Shen refuses to let him die and her love gives him the strength to recover. Unfortunately, Yoshi would never truly find a way to banish his anger, and a later outburst at the newly appointed Jonin Oroku Saki would get Tang Shen killed and force he and his four sons to go into hiding. 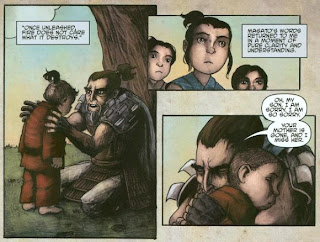 In hiding, Yoshi finds himself overcome with grief and anger over the loss of Shen and nearly takes it out on his children. However, he realizes that Shen lives on in their offspring and that she has never truly left. And just as Shen had, his sons give him the strength to overcome his rage.

Even now, in the present, Splinter can see Shen’s qualities shining through in all his sons: her intelligence and curiosity in Donatello, her passion in Raphael, her concern for others in Leonardo and her ability to take pure joy in all experiences in Michelangelo. After considering all this, Splinter finally comes to the conclusion that for the good of the world, he must fulfill his promise to end Oroku Saki’s life. Defeating the last of the Foot Soldiers, Splinter turns to the Shredder (flanked by Karai and Alopex) and asks if he remembers the promise he had made in his previous life.

*Chronologically, this story takes place between pages 7 and 8 of TMNT (IDW) #11.

*Splinter was taken captive by the Foot Clan in TMNT (IDW) #9.

*Events immediately following the assassination of Lord Ochi will be seen in TMNT: The Secret History of the Foot Clan #2.

*This issue was originally published with three variant covers: Cover A by David Peterson, Cover B by Wilson III, and Cover RI black and white version of Peterson’s cover.

Hey, any of you reading Erik Burnham’s current Ghostbusters ongoing series? To go off on a tangent: You should be. It is really, really good.

So when I heard that Burnham would be taking on an issue of TMNT Microseries, you can imagine my excitement. And Burnham delivers with Microseries: Splinter, offering his same level of incredibly strong characterization and tightly paced but never rushed storytelling that has made him one of my favorite authors in the comics industry.

This issue acts as something of a sequel or to prequel to TMNT #5, giving us another in-depth look at the history of the Yoshi Clan back in Feudal Japan. It shows a different side of Burnham than his work in Ghostbusters, which as you can imagine is mostly comedy; giving us a rather moving tale about inner demons, squandering second chances and “the greater good”. This entire issue helps to quench a certain irritation amongst readers up to this point: How can a ninja assassin have a code against killing? The rationalization offered by Splinter in this issue feels very natural and convincing; if you could be “born again”, would you really want to waste that opportunity by continuing down the same path that previously led to your destruction?

It’s a stark contrast from Splinter’s characterization in the Mirage series, where he had his sons out killing people as early as age 12, if not younger, and was never shy in that he trained them solely for lethal revenge against the Shredder. That was always a rather unflattering element of Splinter’s original incarnation and clashed badly with some of the lighter stories presenting him as a loving and doting father. Here, Burnham actually manages to “have it both ways” and not make it a matter of contradictions but a genuine evolution of the character.

What surprised me most about this issue is the portrayal of young Hamato Yoshi as being, well, Raph-like. We always look at Leo as being “Splinter Jr.”, but in this instance it’s really Raph who takes the most after their father. It was a surprising and refreshing change-up to the formula. Things like this and the current Leo/Don rivalry have been some of my favorite “twists”, really making the IDW series stand out and keep me curiously on edge. Any hack rebooting a universe can “change things up” by, oh I don’t know, having Carnage kill Gwen Stacy instead of the Green Goblin and call it a “shocking twist”, but it takes a real creative mind to make the more subtle changes to characters and their relationships and have them feel perfectly natural; more like unexplored opportunities than stark changes for shock value.

Artist Charles Paul Wilson III offers a very visually satisfying issue with Microseries: Splinter, incorporating two distinct styles that contrast the present day sequences with the Feudal Japan flashbacks. He has a great handle on landscapes, architecture and fashion, making the Japan portions of this story feel highly authentic. And this is kinda weird, but I love his drawing of that bird on Page 5. It delivers an immediate sensation of tranquility to the reader, which is exactly the kind of atmosphere that section of the story was striving for (Yoshi being shamed by his brash actions and forced to find inner peace via meditation in the forest). Colorist Jay Fotos does something really neat with the Japan pages in that the empty space behind the panels is textured to look like parchment. Another very subtle effect that drives home the atmosphere of the period sequences.

This was a very strong issue and a wonderful “sequel” to issue #5, which was one of IDW’s best. Just a great collaboration of talent, really fleshing out the characters and universe of IDW’s Ninja Turtles.

Grade: A (as in, “Although I think we still need an explanation as to what a Chinese girl was doing in Feudal Japan, at a time when China and Japan weren’t exactly best buddies… Not that they’ve ever been best buddies”.)