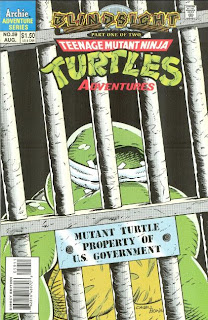 “Blind Sight, Part One of Two”

At a studio recording the latest live episode of Inside Affairs, host McIntyre has the audience eating out of his hand regarding the dangerous “Teenage Mutant Turtles” he’s been reporting on. Tonight, though, he wants to invite a special guest to discuss the situation: April O’Neil, a close friend of the Turtles. As April takes her seat, McIntyre prepares to roast her alive on national television. April, however, has an ace up her sleeve. 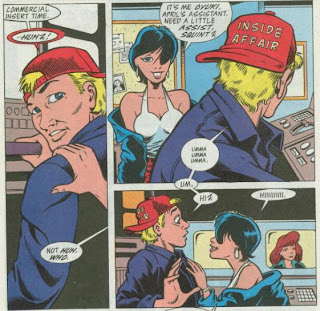 In the broadcasting control room, Oyuki slinks in and starts putting the moves on the A.V. tech, Squint. As Squint is distracted by making out, Oyuki slips a special video into the player. On stage, the audience is eating up McIntyre’s propaganda that the Turtles are monsters, but April takes it in stride, explaining that if they got to know the Turtles, they wouldn’t think that way. She then thanks McIntyre for allowing her to play a special video recording on the broadcast to show the truth about the Turtles (and McIntyre is none too happy about this turn of events).

As the video starts, an unknown cameraman follows Leo and Don as they infiltrate the USCGS Dater where Mikey is being held prisoner. The video then switches to a government recording camera, where Dr. Richard Synargo (AKA “Dr. Dick”) is interrogating the blind and helpless Michaelangelo. Mikey tries to tell him that he’s a mutant turtle, but Dr. Dick insists that he’s an alien and wants the truth. When a shot of truth serum fails, Dr. Dick begins torturing Mikey with a pair of plyers. 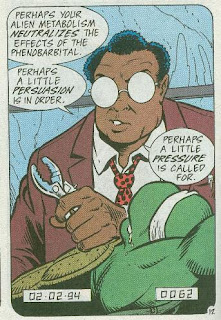 Meanwhile, Leo and Don succeed in knocking out the various members of the Coast Guard and make it to the interrogation room right before Dr. Dick takes a cattle-prod to his victim. They knock the interrogator out and decide to seize his camera as evidence. Through the government camera, we can see that Leo and Don have brought along their old friend, Kid Terra (who is outfitted with his own recording helmet) and two of his human allies.

As they fight their way through several armed guards, Dr. Dick comes to and gives chase. The Turtles, Kid Terra and his men make it back to their escape raft, but Dr. Dick insists on plunging into the water after them. Unfortunately, he can’t swim. Despite everything he had done to him, Mikey leaps into the water, following the sound of Dr. Dick’s voice, and rescues the grateful scientist.

Back at Inside Affairs, the video ends and the audience have a change of heart. They cheer for the Turtles and April, leaving McIntyre to desperately try to save face by thanking April for bringing the truth to light. In the broadcast control room, Oyuki bids Squint goodbye (encouraging him to call her sometime) as McIntrye storms in and gives the tech Hell. As April and Oyuki leave the studio, they find the Turtles waiting for them with a taxi amidst a crowd of admirers. In front of many flashing cameras, Mikey shouts “Cowabunga” and the Turtles drive away from the paparazzi. 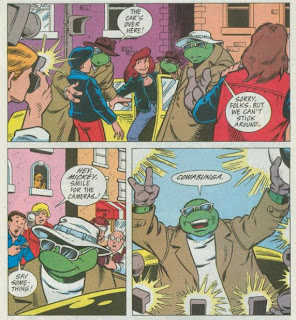 Later, at Kid Terra’s eco-warrior group HQ, Oyuki is pleased to see that Mikey’s sight is slowly recovering. April compliments Kid Terra on having organized such a group. He explains that they’re so sophisticated, they were able to hack into government computers and learn about Mikey’s detainment as soon as it happened, which is how they bumped into Leo and Don during the rescue. With that exposition out of the way, they decides to see if they can’t find the rest of April’s missing friends.

TMNT Adventures is growing up faster and faster, isn’t it? After the brutality of “Megadeath” and “Terracide”, it’s hard to imagine what more they could do, but Murphy (Clarrain) keeps pushing things into ever-more-mature directions.

This issue deals with some rather dark violence that is mostly mentioned but never seen. Dr. Dick’s interrogation of Mikey is pretty nasty stuff, though we’re never shown a drop of blood (still, they mention that the plyers are bloody and Mikey’s been badly mutilated). Honestly, the line between the Mirage TMNT comic (the one for adults) and Archie’s TMNT Adventures (the one for kids) has begun to blur considerably and, so far as intensity of content is concerned, there’s less and less of a difference. Just wait until we get to the Hitler stuff in a few more issues.

This was also a rather… “risqué” issue, so to speak. You’ve got Oyuki’s seduction of Squint, though they make sure to include lines about Oyuki not minding getting it on with him at all because she thinks he’s cute. There are other little jokes, too, such as April threatening a sexual harassment suit against McIntyre and Dr. Dick mentioning that his enemies call him by that nickname for obvious reasons.

The overall story seems to be trying to bring the Turtles into the public eye and taking them out of the “urban legend” category they’d been in. There’s kind of a problem with that angle, though; the Turtles were openly seen amongst crowds of humans sans-disguises in many Specials. Then there’s the whole idea that the public can’t accept or believe anything as crazy as walking, talking turtles. Really? This is the comic where a hundred foot ninja robot fought a hundred foot dragon by the statue of liberty. This is the comic where a hundred foot alien brain in a cyborg bald-man robot ran around town, smashing skyscrapers. This is the comic where the Empire State Building was once shrunken down to a miniature size and stolen by an evil ninja gang leader.

Crazy shit happens ALL THE TIME in this comic and on a scale that cannot be ignored by the public. Admittedly, most of that stuff was early in the title’s publication, but even this far into the series, Murphy has been drawing ideas and plot threads from those earliest of issues, so they can’t exactly be ignored. It’s just too late in the game to try and play the Turtles off as “something totally weird and unknown that the public can’t accept without evidence”.


But despite that, this was still a great issue. And good to see Kid Terra back and trying to make amends for his ill deeds, even if he’s doing so by running a faux Green Peace operation. The meat of the story being told between two different cameras is actually laid out and paced really well and the whole concept works on the page, so props to Allan for pulling it off. And lastly, the plot kind of reminded me of that Fred Wolf TMNT episode, “Turtles on Trial”. 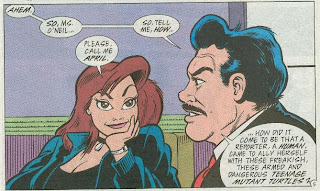