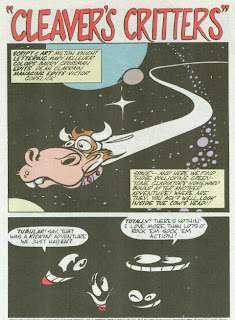 Still traveling through space inside the maw of Cudley the Cowlick, the Turtles brag about their recent adventure. Suddenly, Cudley gets caught in an intergalactic traffic jam, as hundreds of huge, weird creatures cloud the void. One smacks Cudley in the cheek, forcing him to spit-up the Turtles. The helpless ninja then crash-land through the roof of a mountaintop observatory in Dimension Grade-A. They wake up in a nursery, where a baby with a huge nose looks sad. His mother, Mrs. Beaver, comes in and sees the Turtles. Thinking them more critters created by her son, Cleaver, she drags them outside to hang with the rest (who are so many in number, they’ve piled up into space, causing the “traffic jam”). The Turtles explain themselves to Mrs. Beaver and ask her what’s going on. 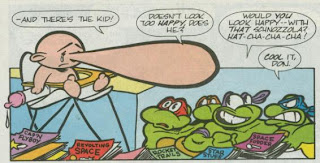 Mrs. Beaver says that she used to live in town until one day Cleaver caught a rare, un-curable disease called the Monster Pox. The ailment causes Cleaver to sneeze up humongous, weird monsters (though they’re harmless, depending on his disposition). An angry mob, led by a hillbilly named Beebo, torched her house and drove her into the mountains, where she has been holed up in the abandoned observatory ever since.

Moved by her plight, Raph vows to help solve Mrs. Beaver’s problem. As they leave, Don gives Raph a sound thrashing with his bo staff; they’re lost in a strange dimension and can barely help themselves, let alone anyone else. 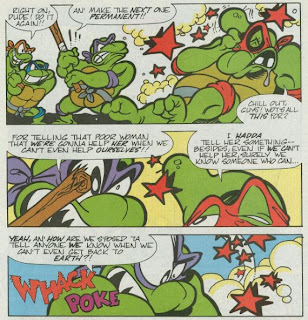 The Turtles decide to think it over at Heidi’s Tomato Hop and order a pizza. Unfortunately, Beebo is present and mistakes them for critters. A fight breaks out and the Turtles trash the gargantuan brute, though his body falls over on them, knocking them out. The waitress then suggests they solve the problem at its source by killing young Cleaver. Dressing up in white hoods and robes, they bury the Turtles alive in a cemetery to make sure they don’t get in the way, then march en masse to the observatory.

Seeing the mob close in, Mrs. Beaver finally goes over the edge. She asks Cleaver to begin sneezing big mean monsters to stop the mob. Cleaver does so and the monsters begin killing the rioters, though the sneezing starts to take a physical toll on the little baby. Meanwhile, in the grave, Raph has contracted Monster Pox from Cleaver and sneezes up a huge bird with a drill for a head. It digs them out and flies them up to the observatory. Leo tries to talk Mrs. Beaver down from her madness, but she accuses the Turtles of being with the mob. To end the madness, Raph begins sneezing up bigger, meaner critters to eat the ones Cleaver creates. 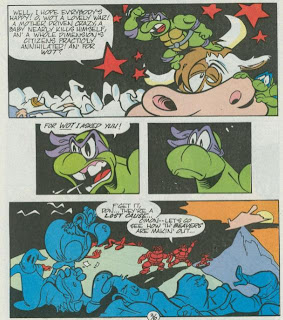 Eventually, hoping for a way to stop the violence once and for all, Cleaver sneezes up a storm cloud that brings Cudley down to Dimension Grade-A. The remaining rioters flee while the dead are left to the buzzards.

The next day, the owner of the observatory, Doctor Seewell, returns and gives Cleaver a proper checkup. His fever has broken and he seems to have gotten over his Monster Pox. Doctor Seewell and Mrs. Beaver quickly fall for one another and the doc asks the young mother to move away with him to the much more pleasant Dimension of Love. A happy ending, the Turtles load all the smaller, gentler critters into Cudley’s mouth, offering to release them in Dimension X where they’ll fit right in.

On the trip back, Don apologizes to Raph for giving him such a hard time before about helping Mrs. beaver. Don tells Raph to go ahead and hit him as hard as he can to make up for the beating he gave him with his bo staff. Raph isn’t willing to oblige at first, but his Monster Pox suddenly comes back in full-force and he begins sneezing up critters that attack Don. Cudley’s cheeks expand as he hurries to drop his payload off.

*This story is continued from “Pig Heaven, Part 2”.

*Cudley the Cowlick will return in "Full Circle".

*The ending dialogue is extremely confused, as Raph claims to have tormented Don about helping Mrs. Beaver while Don is said to be the one that had the Monster Pox and saved the day. In reality, it was the other way around.

Another weirdo tale from Milton Knight, but like I said with the last three Knight comics I’ve reviewed, I just dig that guy’s style. “Cleaver’s Critters”, despite its surreal art style, isn’t a story that wouldn’t fit in with the overall weirdness of TMNT Adventures. It’s cartoony and goofy for sure, but this is a comic where two anthropomorphic trees hold wrestling tournaments in outer space. A baby that sneezes monsters isn’t really any worse than something like that.

Knight captures a frantic sense of motion in each panel as characters squash and stretch with each line of dialogue. Even if the art style isn’t to your liking, there’s no denying it’s a well-crafted comic with terrific layouts and visual consistency.

The story-itself is a fever dream of insanity, but not in the same “stream of consciousness” nonsense vein as similar cartoonists like Hedden and McWeeney or Mark Martin. There’s a narrative structure and plot that drives the story with its own internal logic. It’s very fun and never dull. I really hate comics that do randomness for the sake of randomness, thinking that it’s the same thing as actual humor; and that’s not what Milton Knight comics are like even if they may appear so superficially.

Overall, I wouldn’t say I liked it more than “Louie’s Pasture” and “Pig Heaven”, but “Cleaver’s Critters” was still a fun and weird story by a great cartoonist. These kinds of stories are nice diversions from the dower seriousness of the main TMNT Adventures ongoing, which by 1994 had kind gotten its head stuck up its own ass and wasn’t much “fun” anymore.

Grade: B- (as in, “But the Ku Klux Klan thing was laying the message on a little thick, I think”.)