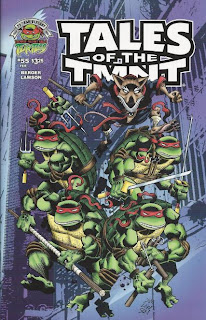 “Day in the Life”

Frontispiece: Remembering a time when they were children, roughhousing as Splinter lectures them, Raph wishes that things were as simple now as they were then. Raph is then reminded of a an average day, before all the insanity and adventure had crept into their lives…

It’s 5:00am and down in the lair, Don has spent all night working on perfecting a tiny robot (though he can’t get it to respond to conversation properly). In another room, Leo’s alarm goes off and he diligently begins meditating for the day ahead. In the kitchen, Mike has been up all night drawing his latest “Captain Awesome” comic, though the hours finally get to him and he dozes off. Raph, meanwhile, is still asleep, cuddling with his one-eyed teddy, Brown Bear.

Always the leader, Leo corrals Mike and Don, telling them to get an hour of solid sleep, in bed, before they have to get ready for practice. Leo then attempts to sneak to the surface, but is caught by Splinter. Leo apologizes for failing him, but Splinter orders his son to be silent. Splinter explains that by declaring himself a failure and not leaving such a decision up to his sensei, Leo lacks confidence and displays self depreciation; qualities not suited for a leader. Splinter tells Leo that he is very proud of him and to remember what he’s been taught. Leo is flattered and as they walk back to the lair, he asks if he almost got passed Splinter this time. Splinter tells him that he was close, but not to get cocky. 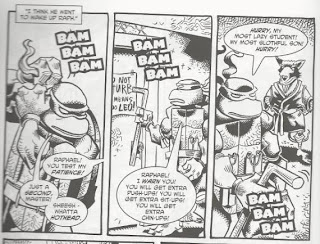 At 6:50am, ten minutes before his alarms is set to go off, Raph is rudely awakened by the sound of Splinter banging his cane against his door. Raph quickly stashes Brown Bear and starts getting ready as Splinter yells potential punishments for such lazy behavior. Of course, “Splinter” turns out to be Mikey playing a prank; and he’s caught both when the real Splinter arrives to wake Raph and when Raph opens the door (getting a few raps on the head from Mikey and his cane). Mikey dashes off and Raph vows to get him back during their sparring session.

At breakfast, Splinter tells his sons (yet again) the story of the tortoise and the hare and reminds them that diligence is the only path to mastery of the martial arts. From 7:30am to 12:00pm, Splinter instructs them in intense physical discipline, with a bit of horseplay from time to time on Mikey’s part (and at Raph's expense). During lunch, Splinter tells them another story; this time about how Master Yoshi opted not to openly battle a challenger, but to walk away. Raph and Mikey think Yoshi should have stood his ground, but Leo and Don believe he did the right thing. Leo says that sometimes immediate vengeance can be sloppy and cause repercussions; that at times you have to be patient and wait for the best opportunity (again, tying into the earlier lesson about the tortoise and the hare). Splinter praises Leo and Don for understanding the lesson; that as ninja, they have to keep their actions secret; “strike hard and fade away into the night”, as he puts it. 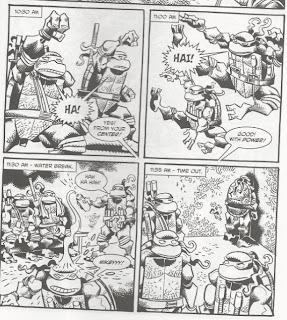 Following lunch, sparring then begins and Raph couldn’t be happier. Having to endure Mikey’s needling all day long, he lets loose with his bokken (wooden practice sword) and begins wailing on his brother. Leo intercedes and warns Raph that he could have seriously injured him. Raph is ready to take his frustrations out on Leo when Splinter comes between them. He orders all four of his sons to go to their rooms and meditate for an hour.

Raph chooses to read magazines in the kitchen, instead; at least until Splinter orders him to get to his room. Entering his room, he finds Brown Bear missing. Mikey shows up and says that he took Brown Bear; not as a prank, but to fix his missing eye. Raph is confused (and a little embarrassed) and Mikey explains that it’s just his way of saying sorry for always annoying him. Raph apologizes for trying to beat him up during their sparring session and the two part on kinder terms.

During dinner, the Turtles bombard Splinter with an array of questions and requests; Mike asks Splinter to read the comic he just drew, Raph asks if he can have a guitar to “help with his meditation”, Don asks if Splinter can help him look for discarded circuit boards and Leo asks him questions about Master Yoshi’s training regimen. Splinter calms them down and promises to help them all in due time. First, however, it is movie night.

After a good Bruce Lee flick, the Turtles all head off to bed (with Mikey and Don being especially tired after having lost sleep the previous night). Everybody wishes each other good night in a bad parody of “The Waltons”. 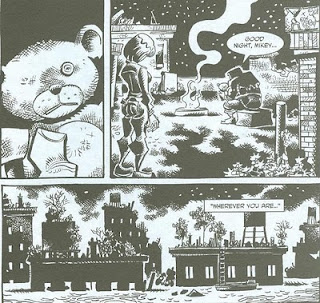 Epilogue: It is the future and Raph sits atop an abandoned skyscraper; the streets flooded below. He attempts to carry a conversation with a robot duplicate of April that Don built him, but the thing busts and he has to shut it down. Raph then takes a seat by his fire and pulls out his old childhood possession: Brown Bear. Staring into its one-eyed face, Raph solemnly wishes Mikey a good night, not knowing where he is. He then looks up at the star-filled sky.

*The main story in this issue takes place “just before it all started”, so just prior to TMNT (Vol. 1) #1 (Berger’s opening editorial confirms this placement).

*The epilogue has to take place sometime after the main story in Tales of the TMNT (Vol. 2) #41, as Mikey was seen in that issue but is designated missing, here.

*According to author Dan Berger, the April robot was originally going to be an alien girlfriend of Raph’s, but was changed when Peter suggested the April robot (which Lawson subsequently drew to look similar to April’s design from the Fred Wolf animated series).

*In regards to Mikey’s missing status in the epilogue, Berger stated that he put that in there due to Mikey’s status in Laird’s TMNT Vol. 4, where he was adventuring in space. Not sure if Mikey would ever make it back, Berger added the ominous starry sky to imply he may still be out there.

*Raph’s rage-filled attempt to clobber Mikey in practice foreshadows a more serious attempt in Raphael (microseries) #1.  Leo repeats Master Splinter's lesson about "striking hard and fading away into the night" in TMNT (Vol. 1) #1.

“Day in the Life” is perhaps one of my favorite stories from Tales Vol. 2. It isn’t exciting, it isn’t action-packed, it doesn’t have high stakes and it doesn't introduce any new villains or allies. Yet it’s a very special issue and one that’s extremely memorable to me because it doesn’t try and do any of those things. It’s just… a day in the life.

One of the things you’ll notice about the TMNT, mostly because they’re comic book characters, is that they can never have a dull moment. They go on a camping trip? Warring alien princesses attack. They go river rafting? Angry fish people attack. They play hide and seek? The Rat King wrecks their shit. They try to relax at the farm in Northampton? Cousin Sid holds everyone hostage because he wants a treasure map.

They just can’t catch a break.

Obviously, not every single day of their lives can be like that, but as readers looking for entertainment, those are the days we get to see. An entire issue where Raph works on his motorcycle, Mikey plays video games, Don reads a computer manual and Leo meditates would not make for an enthralling 20-something pages.

But “Day in the Life” is just that sort of issue and, after twenty-five years of nothing but stories where the Ninja Turtles fight assassins and aliens and monsters, it’s a very refreshing and honest diversion. As someone that really enjoys the characters in and of themselves, I do find myself curious what an “ordinary day” is like for them. I can see how someone new to the Turtles or perhaps just a casual fan would find this sort of tale tedious and dull, but I think for those of us more invested in the series, it offers its own fascinating tidbits.

Dan Berger pens a very mellow script that offers only a small level of conflict and melodrama to give the tale the faintest amount of zing (and a nice foreshadowing of Raphael #1) while not getting away from the intended purpose of being a very average twenty four hours. He peps the story up with some light comedy that’s amusing, though not overly hilarious (and again, an excess of elaborate humor would have taken away from the point of this tale). My favorite moment, incidentally, was the two-panel gag where Mikey gets a time out.

There’s never-the-less a strong emotional backbone to “Day in the Life”. In his twilight years, left all alone in the ruins of the world, with a lifetime of unique and amazing memories to look back on… Raph chooses, instead, to reflect most wistfully on an incredibly average day from his youth, before they began having their world-shattering adventures. In his opening editorial, Berger says it best: “These are tomorrow’s good old days”. And he couldn’t be more correct. I’m 27 as I write this review, with that dreaded Three-Oh creeping up a little closer as every minute passes. It’s starting to feel like “Logan’s Run”; like the second I hit that terrible number, the jewel in my hand is going to start blinking. But also as I get older, I find myself reflecting more frequently on the simpler times; when I was a kid and didn’t have to worry about rent and work and groceries and bills. And I’m sure that ten years from now, I’ll look back at when I was 27 and think I had it pretty great, then.

It’s a sensation I’m sure we’re all pretty familiar with and Berger channels it expertly in his script. I’ve got a few “exciting” memories, sure, but they aren’t the ones I treasure most. As I get older and I slowly but surely begin to either lose or part ways with the people I care about most, it’s my mundane memories of them that I summon with the greatest fondness. Likewise, for Raph, it isn’t his memories of the warring alien princesses or fish-people or Rat King or whatever that he chooses to dwell on in his old age, but the time his brother fixed his teddy bear for him.

And that’s what really makes this issue stand out for me. Not just the fact that by intentionally being so average it winds up offering a unique story, but because it taps into an emotion we can all relate to as we grow older.

Grade: A (as in, “And Dooney’s frontispiece is one of my favorites in the whole volume. The Popeye arms on the toddler Turtles are great”.)