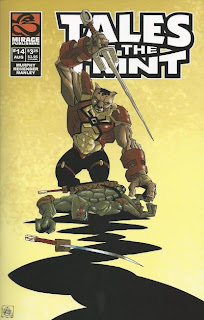 Frontispiece: On a rooftop, Leonardo does battle with a rampaging Leatherhead. As he leaps down on the gator, Leo can’t help but contemplate how time travel never fails to confuse him. Even weirder than time travel, though, is meeting yourself…

Before the cat-person can strike 45-Leo down, 15-Leo intercedes, only to get knocked away. More cat-men arrive and 100-Leo, having long ago vowed to never take another sentient life, takes one out with his high-tech bokken. 15-Leo asks what the bokken’s deal is and 100-Leo explains that it channels his own bio-energy via willpower and delivers a powerful debilitating shock to his enemies (and it was a gift from Donatello on his hundredth birthday). Together with 8-Leo, they take down the cat-men. 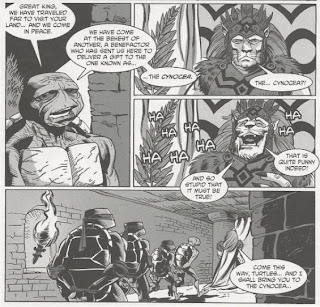 Suddenly, a cat-woman with a chained gorilla-man named Mon-Ghat attacks. 100-Leo attempts to sway the enslaved gorilla to their cause, but the cat-woman has his family held hostage. The Leonardos are forced to surrender and are bound and taken before King G’Dello. G’Dello asks why they have trespassed into the conquered kingdom of Feenosia and 100-Leo explains that they’ve come to deliver a gift to the Cynocea. G’Dello laughs and takes them to the Cynocea.

The Cynocea is actually the title of the true ruler of Feenosia, before G’Dello invaded and killed the previous ruler, Macqou-Doth Noor. Macqou’s infant son, Pai-Doth Noor, now resides in the nursery/prison cell, being looked at by a host of gorilla-women. G’Dello leaves the Turtles to spend their lives in Pai’s cell, not thinking that their gift (a gem stone) is of any value worth seizing. After he leaves, the monkey-woman Luschea places the gem in Pai’s mouth. The mystical powers allow Pai to escape his dying body in the Astral Plane and sends his fully-formed consciousness into his infant body. 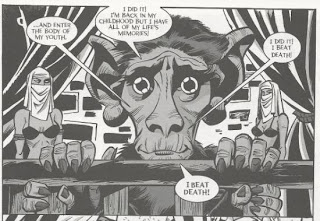 Pai exclaims that he has found the key to escaping death; by reincarnating himself through a “loop”. The Turtles are confused and Pai explains his origin story. After G’Dello seized Feenosia, he kept Pai alive for political reasons, but left him a prisoner in his own castle. Pai developed great mental and spiritual powers, eventually escaping to the Astral Plane. From there, he was allowed to journey through mystical and intangible realms and observe other worlds, but could never again return to the physical plane. The Turtles, though, helped him finally achieve his dream and he thanks them by unbinding their hands and returning their weapons.

The Turtles make their escape and are immediately barred by more cat-men and Mon-Ghat. 100-Leo repeats his offer and Mon-Ghat accepts, helping them take down the cat-men. Eventually, they succeed in overthrowing G’Dello and returning the rule of Feenosia to Pai. Pai happily sends them all back home, though he assures them they’ll have no memory of their adventure. 100-Leo, however, has a bad premonition and asks to stay behind a while and help Pai. Pai refuses, thinking he’s won the day and cheated death. Shortly after he sends his pawns home, the army of the Pharaoh, on the trail of the Turtles that saved baby Moses, discover the kingdom of Feenosia and attack en masse. 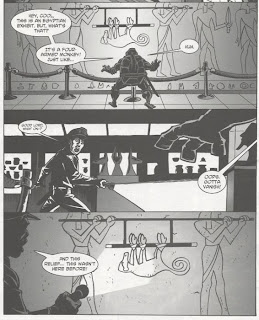 Returned to his proper time, though not proper place, 8-Leo finds himself in the Engyptian wing of a museum. Staring before him is a huge stone relief picturing Egyptian soldiers toting the corpse of a four-armed monkey behind them. 8-Leo quickly forgets the significance of the image and escapes before a guard sees him. Likewise, 15-Leo and 45-Leo are returned to their proper times with no memory of the event, recalling it only as a recurring “day dream”. 100-Leo, however, remembers it perfectly. He contemplates how Pai risked his life four times in a foolish quest to cheat death. 100-Leo remarks that no one can cheat death, not even a turtle.

*100-Leo will return in the future-set story Tales of the TMNT (Vol. 2) #41. The reason for his vow never to take a sentient life will be explained in that issue.

*A cat-person will appear in TMNT (Vol. 4) #11, however, according to Steve Murphy in the letters column of Tales of the TMNT (Vol. 2) #16, that cat-person is unrelated to the ones which appeared in this story arc.

While the first half of “Loops” was more about watching the four different Leonardos interact with each other, the second half winds up containing the lion’s share of the plot. It can be a little awkward, as we’re very quickly thrust into long, ranting expositions explaining the political landscape of Feenosia and Pai-Doth Noor’s origin. Still, the pacing isn’t nearly as bad as it sounds and the pages of exposition are punctuated with a healthy serving of action.

Pai-Doth Noor isn’t so much a villain character as he is a delusional one, making the true antagonist of this piece a bit harder to nail down. Yes, Pai risks Leonardo’s life on four separate occasions to achieve his own end, but Leonardo agreed to the terms of the contract when he came to Pai for aid in defeating the Worm-Shredder. And Pai certainly plays everything square; there’s no underhanded trick in his mission and not only does he follow through with sending them home once they’ve succeeded, but he thanks them repeatedly. He’s certainly not a bad guy, by any means, even if his hubris proved his ultimate undoing.

That would make D’Gello the next candidate for the villain role, but he’s pretty much just your bland dictator type. He appears to facilitate some exposition and we never even see him get overthrown at the conclusion. Really, I don’t think “Loops” HAS a typical cut-and-dry antagonist character, and that’s not necessarily a bad thing, either. There’s plenty of conflict and action to move the story along, so it doesn’t require a “bad guy” to function.

For whatever reason, Remender was only able to pencil the first 9 pages of this story. Ink and toner Mike Manley completes the remainder and does a really good job. His style isn’t exactly congruous with Remender’s, as he takes a much less angular approach to the Turtles which I rather liked. On some pages he appears to be making an effort to mime Rememder’s look, but more often than not he does his own thing. I suppose if I had any complaint, it would be that he draws 8-Leo looking as old as his adult counterparts on many pages, with really defined musculature and facial lines. Still, his action layouts are great and the change in art isn’t jarring; his style is different but not radically, so you transition pretty smoothly.

All in all, “Loops” is one of my favorite Leonardo-centric stories. While it has nothing on “What Goes Around… ...Comes Around!”, it beats the heck out of “Blind Sight”. If you don’t like Leo, I doubt this one will change your mind about him, but I think even his disparagers can appreciate “Loops”.

Grade: B (as in, “Brizuela’s frontispiece for this issue is worth picking the book up all by itself”.)
Posted by TMNT Entity at 4:53 PM