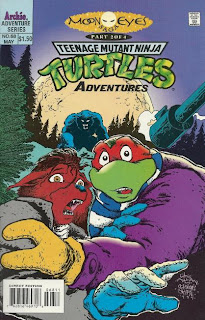 
“The Howling of Distant Tomorrows”

As Mokoshan approaches the Turtles, April and Ninjara, he resends his death threat once he sees that Ninjara is an anthropomorphic canine like himself. Immediately smitten, he dubs her “Moon-Eyes” and compliments her on her beauty. Raph is instantly incensed and tries to break the two up. Ignoring him, Mokoshan vanishes in a sudden flurry of snow, promising to see Ninjara again. Ninjara, meanwhile, looks equally smitten. 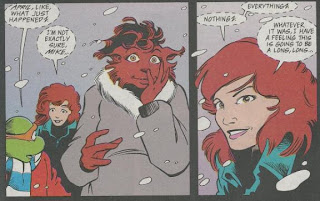 At camp, April asks Ninjara if she wants to talk. Ninjara explains the deal between her and Raph and admits that she’s just no longer in love with him. Mokoshan, however, intrigues her.

Hitting the road the next morning, Ninjara still refuses to discuss matters further with Raph, making for an uncomfortable car ride for everybody. Sulking, Raph spots an Indian watching them from the rocks, though nobody else pays him any mind. After gassing up, they continue their trip north and Raph notices the same Indian a few miles up the road, still watching them. 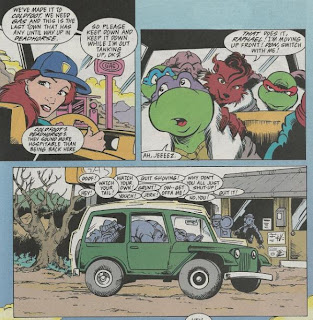 Later, April leads the Turtles and Ninjara on a hike. She explains that she’s following a story about the US Government planting radioactive waste in the arctic to study its effect on the environment. Unfortunately, the government didn’t tell the local Eskimo community what they were up to.

Looking down a small valley, they spot a pack of wolves devouring a caribou. Suddenly, Ninjara spots an old hunter about to fire upon the animals. Wanting to protect her canine brothers, she races out into the valley to warn them and the hunter shoots her by mistake. Ninjara collapses and passes out. Furious, Raph rushes to the hunter and prepares to wipe the floor with him. The old hunter’s grandson then pops up and begs Raph not to hurt him. 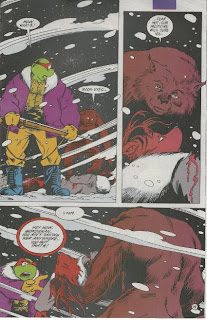 Right in the nick of time, Mokoshan appears, leaning over Ninjara. He promises “Moon-Eyes” that his peoples’ medicines can save her and without so much as a word to the Turtles, disappears with Ninjara in a flurry of snow. Raph wants to go after him, but the flurry turns into a blizzard and the gang is forced to make camp.

Later that night, as the blizzard gets worse, Raph sneaks out on his own.

Out in the wilderness, Inky has assimilated into the pack of wolves, though he would rather be eating canned dog food than freshly killed moose. Following a sound, the alpha male leads the pack to a cabin where he finds his mate trapped behind an electric fence. 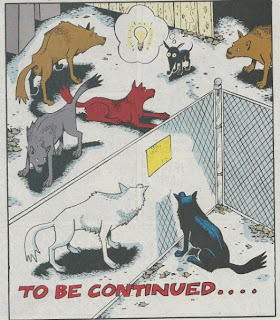 Inside, a pair of humans gloat about having captured the she-wolf and make plans to get her mate, next. The alpha male can’t think of a way through the electric fence, but Inky comes up with a plan.

*This issue also contained an Inky back-up story by Jones, Talbot and Lawson.

Just something I found out today while doing a bit of googling, but a “Mark Volman” was the lead singer of a popular 1960s rock band called The Turtles… Which I think explains the genesis of Murphy's new "J.D. Vollman" pseudonym.

Why he’d take on a second pseudonym, I don’t know, but by this point in TMNT Adventures, Murphy’s relationship with Archie’s editorial staff had just about disintegrated. If you look at the credits page for this storyline, they’ve dropped the silly occupation designations for Victor Gorelick and just call him “editor”. Fun’s over, I guess.

And speaking of the fun being over, that’s kind of what the “Moon Eyes Saga” really amounts to: four issues of tedious teen romance and melodrama. While I felt perfectly comfortable with Ninjara’s decision to leave Raph, as it actually read like a valid one, the story just drags about two issues longer than it ever should have. There’s no levity to the “Moon Eyes Saga”, just two angsty mutants fighting over another angsty mutant while April worries about radioactive Eskimos and was that an Indian? Yeah. Nothing says “fun’s over” like including an American Indian in a story. Get ready for lengthy soliloquies about the plight of his people.

As for Mokoshan, the bait and switch in regards to last issue’s cliffhanger felt pretty cheap. Last issue ends with Mokoshan swearing to kill them all, then this issue opens with him essentially saying, “Oh, never mind. One of you is hot”. I think my only real problem with the Mokoshan/Ninjara romance is that Mokoshan… doesn’t look like a teenager. In the slightest. The defined features, heavy lines under his eyes and humongous build make him come off more as a guy in his thirties. Ninjara, meanwhile, is a teenager.

So yeah.  Kinda messed up.

The worst thing about this issue is the conversation between Ninjara and April.  the two have almost never intereacted exclusively with each other before now and this wasn't a superb start. Actual dialogue: “Nothing did happen… But at the same time everything happened, you know?” Jeez, how hammy and ponderous can you get? It goes on for two pages with each clump of dialogue carrying the insipid “everything and nothing” theme which is like something a bad fanfic author would conceive as deep and meaningful.

As always, the saving grace of any lesser issue of TMNT Adventures is the solid artwork by Chris Allan. While Ninjara taking a bullet for a bunch of wolves seemed pretty ridiculous, the two-page spread where she gets shot is very well rendered and appropriately dramatic. Allan really nails a lot of Ninjara’s expressions in this issue, particularly her smitten face after meeting Mokoshan.

Also, lots of red blood in this one. Normally an Archie no-no. Crazy.

While the “Moon Eyes Saga” certainly addresses a fundamental problem in the relationship of two characters, it’s about twice as long as it needs to be and we’re only halfway through.