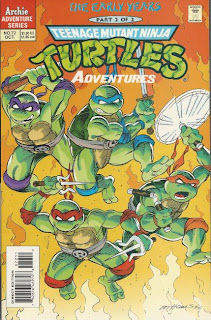 “How the Turtles got their Weapons, Part 2”

Prologue: Down in the sewers, April asks Splinter to stop keeping her in suspense. Splinter stares out through the storm drain and continues his story… 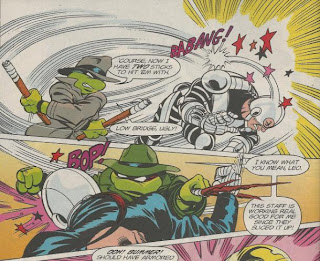 Leaping into action, the Turtles attack the four bionic saboteurs with their bo staffs while Splinter escapes the martial arts school with the unconscious Lynda. The bionic saboteurs prove formidable foes, busting the bo staffs of Leo, Mike and Raph (Don’s is the only one to make it unscathed, as he is most proficient with the weapon). The Turtles make due, however, as Leo uses his broken halves as escrima, Raph uses his splintered half to disarm his enemy with the three jagged prongs and Mike ties his two halves together with his bandana and uses them to trip his enemies.

The Turtles send the saboteurs tumbling down the stairs, but the villains use their flamethrowers to set the building on fire, trapping the Turtles inside. Raph takes charge and leads the Turtles to the martial artis weapon shop on the first floor. Leo, Mike and Raph then grab some fresh weapons (katana, nunchakus and sais) and head out into the streets to catch the saboteurs. 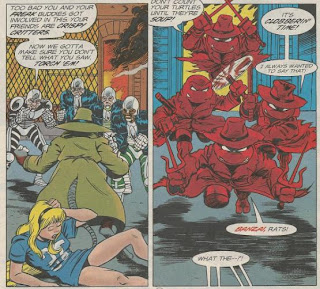 Proving more skilled with their unique weapons, the Turtles take down the saboteurs, destroying their bionic suits. As Lynda comes to, Splinter tells his pupils to vanish before she sees them.

Later that evening, the leader of the saboteurs is revealed to be Don Tower, the contractor in charge of building the new Slujjcorp skyscraper intended to go where Lynda’s martial arts school currently stands. Shelton Slujj pulls up in his limo and assures Lynda that he had no idea Tower was trying to force people off the land to build his skyscraper. Slujj offers to compensate her for all her loses and change his building plans so as to include her martial arts academy in the design. Lynda happily accepts his offer. 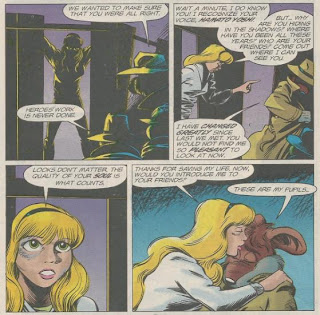 As Lynda goes over the wreckage of her school, Splinter appears to her in the shadows to see that she’s okay. Lynda recognizes his voice as belonging to her old friend Hamato Yoshi, but Splinter refuses to let her see him, fearing she would find his appearance terrifying. Lynda doesn’t care what he looks like and the two old friends reunite. Splinter then introduces her to the Turtles and Lynda offers them a reward: They can choose one of any weapon in her shop. The Turtles wind up fighting over a boomerang.

Epilogue: Laughing, Splinter reveals that Leo, Mike and Raph eventually chose the weapons they use now, while Don got the boomerang. Don later lost the boomerang and went back to using his bo staff. April asks whatever became of Lynda and Splinter tells her to look out the storm drain. April takes a peek and sees Lynda’s martial arts academy prospering, now integrated into Slujj’s shining skyscraper.

*This story is continued from TMNT Adventures #71. The present-day bookending narrative will continue in Year of the Turtle #1.

*The Turtles would eventually meet Shelton Slujj themselves in “If a Tree Falls…”.

*This issue also contained a reprint of “Red Sails in the Sunset”.

And so TMNT Adventures, the longest running Teenage Mutant Ninja Turtles comic of all time, goes out on something of a whimper.

“How the Turtles got their Weapons” was actually a pretty fun story with some great Brian Thomas art, so I can’t really get behind the hate it receives. It’s not a great ending, no, but it clearly wasn’t meant to be anything approaching a conclusion. It’s just a cute filler story (that definitely shouldn’t have been broken in two). I guess it gets a lot of flak for not being “The Forever War”. Ah well.

Despite its title, the subplot in which the Turtles select their unique weapons is sort of secondary to the main story revolving around Lynda. The way the story ties into the 4-part arc from the first two TMNT Adventures Specials was a nice touch and helps make the universe of TMNT Adventures feel all the more solid. I was actually afraid that the shadowy boss-man was going to be revealed as Shelton Slujj and totally contradict his characterization in those stories, but Fulop pulled a fast one and had Slujj show up at the end; the same kind-hearted but environmentally neglectful guy he’s always been.

On that note, I kind of wish Don Tower had been somebody else; a previously established character. When they do the reveal (in a Scooby-Doo parody), the fact that he’s a guy we’ve never heard of kind of undercuts the suspense.

Not much else to say about this final issue, which might actually be its sole damning quality. The series goes out without much fanfare or noise. There’s still the Year of the Turtle miniseries, though, to give us a proper conclusion (at least until “Forever War” gets published… maybe).

Grade: B (as in, “Brian Thomas… I wonder what he’s up to, today? It’d be pretty cool if IDW dusted him off for a Microseries or some trade paperback covers or something”.)